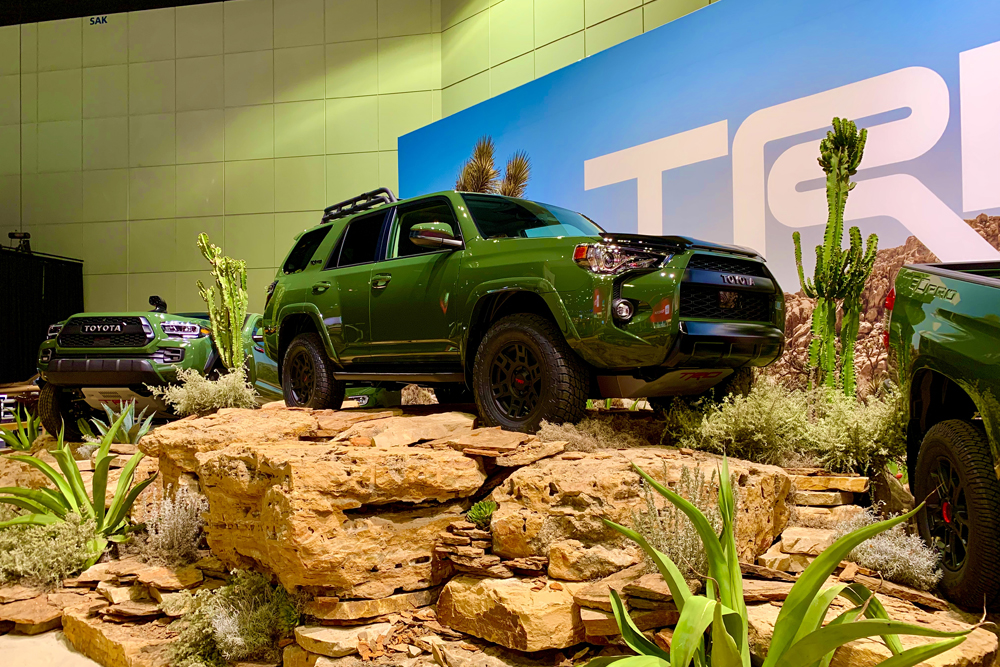 As fate would have it, work has given me a great opportunity to have a first look at the 2020 Toyota 4Runner TRD Pro at the coveted Los Angeles Auto Show.

This show saw more than 70 new vehicle reveals and press announcements, including the new Ford Mustang and an incredibly slick-looking Karma SC2. Let’s just say it boasts an incredible 0-60 in 1.9s and 10,000 lb-ft torque at the wheels.

While I would call myself an enthusiast, I’m by no means a specialist. But with a few years working at Mercedes-Benz under my belt, I have a pretty good working knowledge of vehicles, in general, on top of the off-road driver training through the AMG academy (*smirks).

Like many of you, I read through the Trail4Runner.com blog and DIY step-by-steps installs with the hopes of making smart decisions about what I’d eventually look to buy or tweak.

Toyota had other feature vehicles in mind when they designed their massive 60,000’ sq booth. The most notable feature was the new Toyota Supra, sparing no expense in an all-out effort helping to create the driver experience with a pretty neat hydraulic driver simulation. 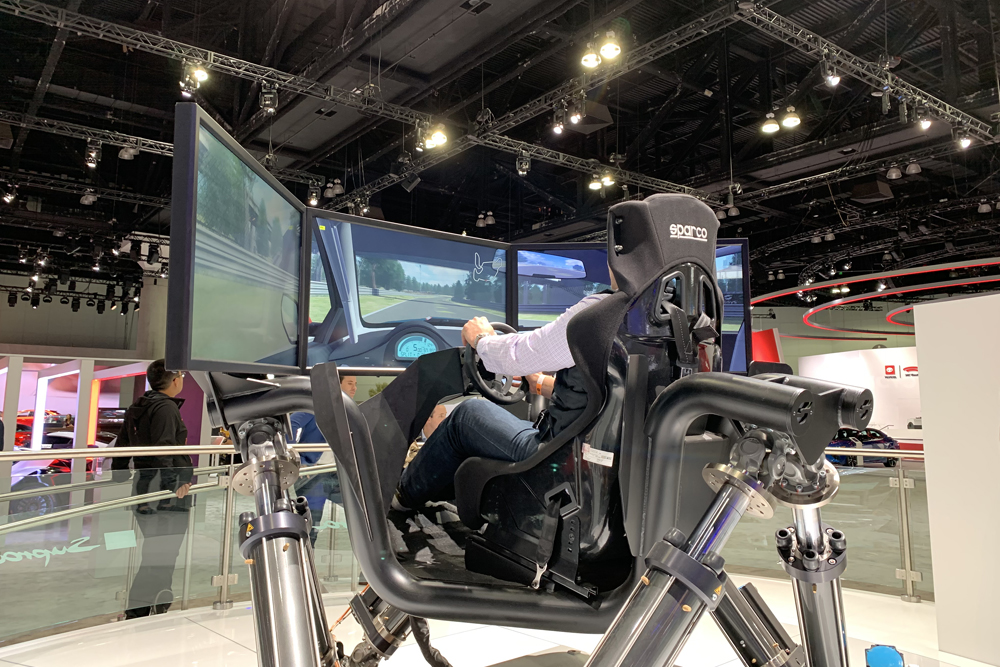 While the focus of their show experience is meant to attract the ‘racer tuner’ crowd and build on the success of the previous generations of Supra, I had other motivations and wasted no time walking through to the back corner of the booth.

Spoiler Alert: Prepare yourselves for ridiculous mods and builds that will never see a day on the track but will in-fact see ONLY street lights.

I am going to go ahead and ruin everyone’s day here by saying there is no hint on when a new body is going to come.

With that said, there are some pretty cool things to look forward to when it does (fingers crossed for 2021). 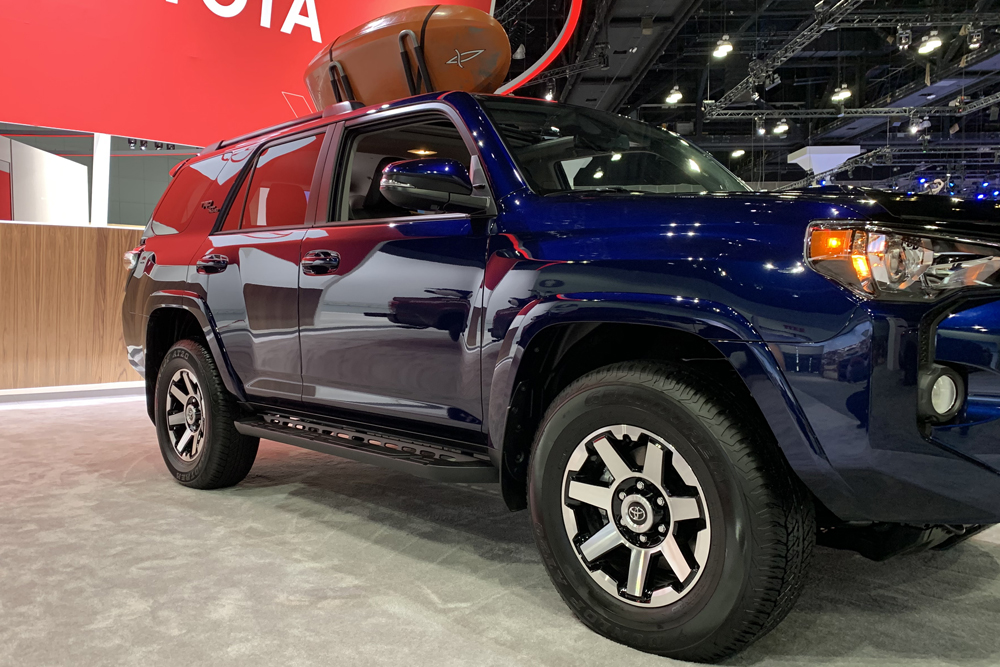 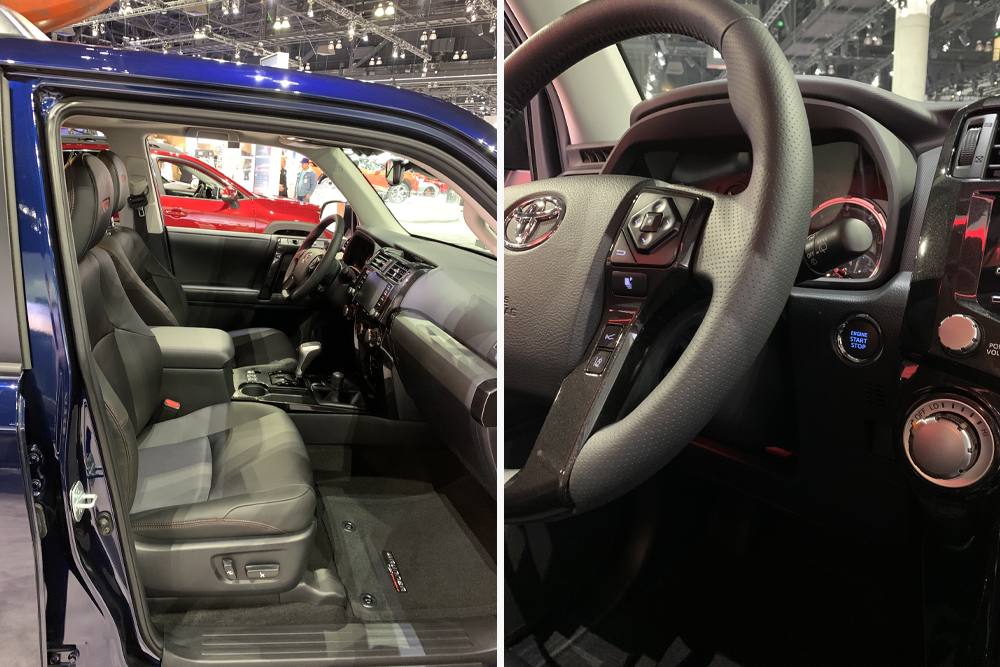 Accessible for entry was the ’20 TRD Off-Road – which offered all the regular fixings that you’re used to. This model, however, has an updated interior look that included the new PTS (push to start) ignition, TRD Material trim throughout, a slick carbon fiber weave trim and the new head unit and display.

The underbelly seemed to have a bit more protection than what I’ve seen on my 4R, featuring some aluminum skid encasements.

Not sure if these existed on the previous models of the Off-Road or Trail editions.

This is going to be similar to the newly released Venture Package released at the Texas State fair earlier this year.

The differences you will see in the Venture Package are going to be stripped-down badging, upgraded new 17-inch TRD wheels, blacked-out trim, Yakima Roof Rack, and a few other small details on the inside.

Both the TRD Off-Road and the Venture Package are going to be fairly similar. 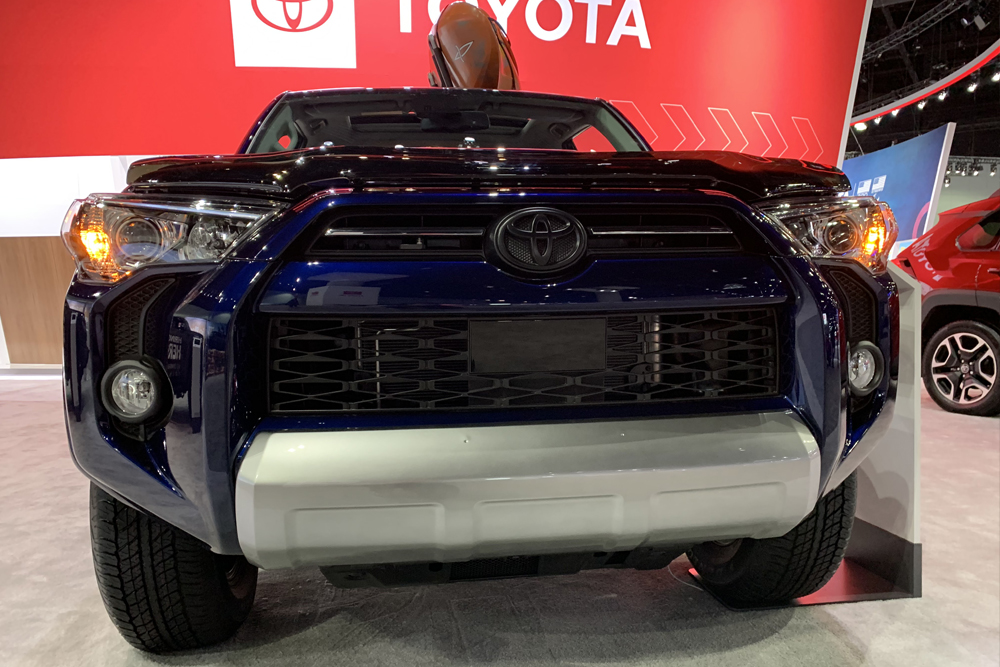 Included is the new Toyota safety sense sensor, which might pose a problem for those of you looking to make any front bumper mods.

Given the emphasis on aftermarket versatility, Toyota places on its vehicles, for the adventure rider and line-up it’s pretty disappointing to know they overlooked the placement of the radar sensor plate.

And they didn’t put it somewhere like the emblem or running through the headliner into the top section of the windshield in the rearview mirror assembly.

Thoughts on the new green body color on the 4Runner? 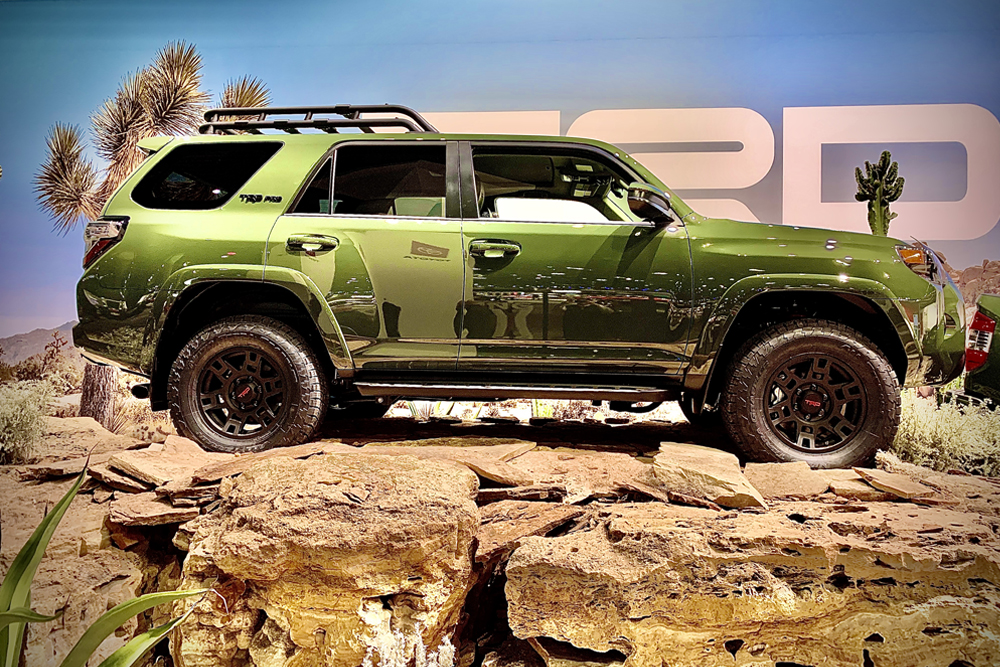 The 2020 4Runner TRD Pro was staged for viewing along with the usual suspects. I was excited to see the new green color, which looks incredibly sexy – but I’m still dead set on the cement (2017 model year TRD Pro) being the nicest previously available body-color out there.

At first glance, nothing for me yelled “WE’RE GOING TO MAKE THIS ONE WAY BETTER THAN THE LAST ONE” – but then I started to notice some subtleties that made me rethink that. 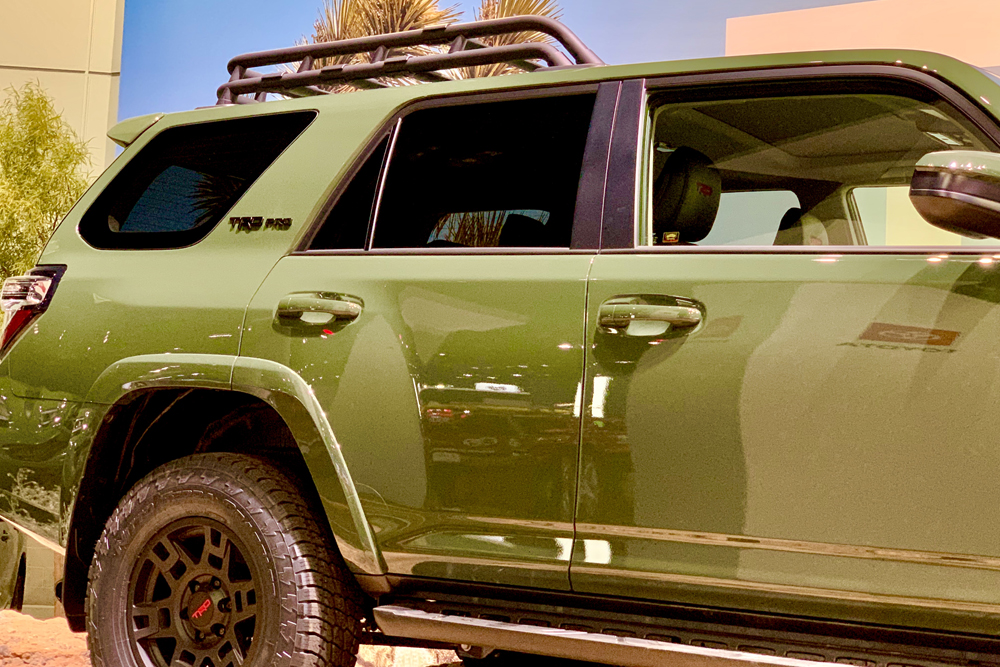 Roof rack – lame and bulky in my personal opinion, too bad Toyota doesn’t give you the option to include or strike from the order and save a few bucks.

The Yakima Rack featured on the LC is no better – but to each their own. 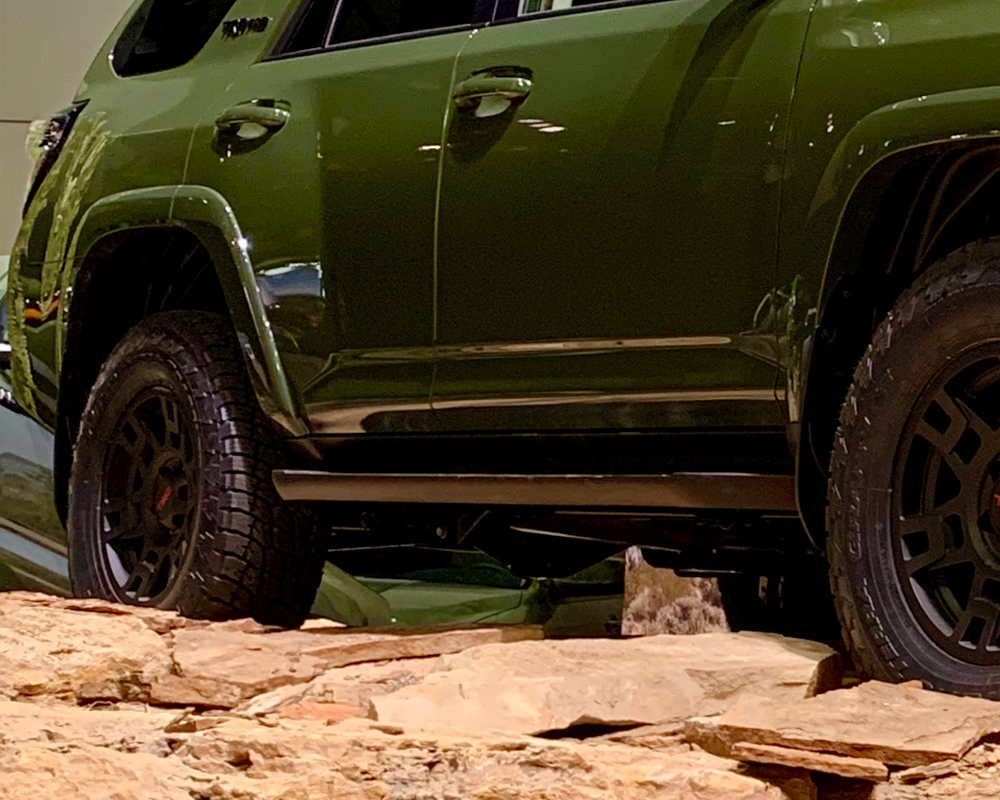 These are slimmer than the previous versions of the molded to frame running board, but still a bulky plastic piece.

With the emphasis that Toyota places on off-road with the lineup, they should really look to revise the running board situation with maybe some aluminum slider/step options. The Tundra and Tacoma are getting them it seems. 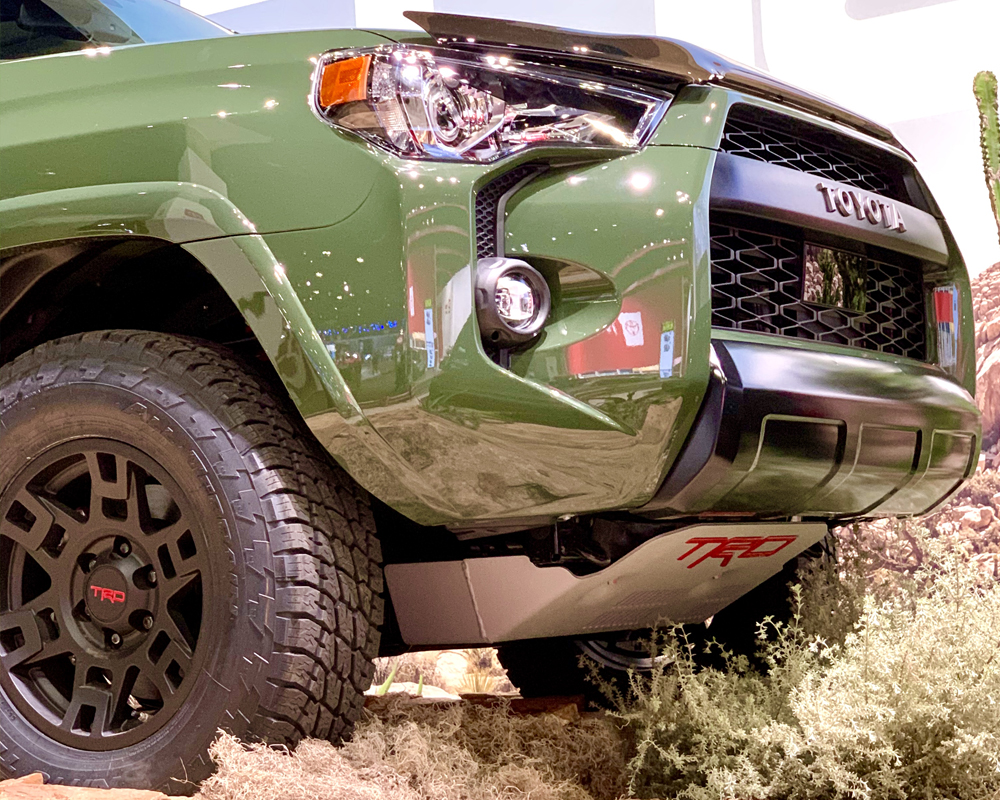 Now, these were the first mod I bought for my 4Runner along with General Grabber ATX’s, and I think they look great.

They don’t last as long as your Generals, Toyos, BFGs, or Coopers but they are great tires none the less. 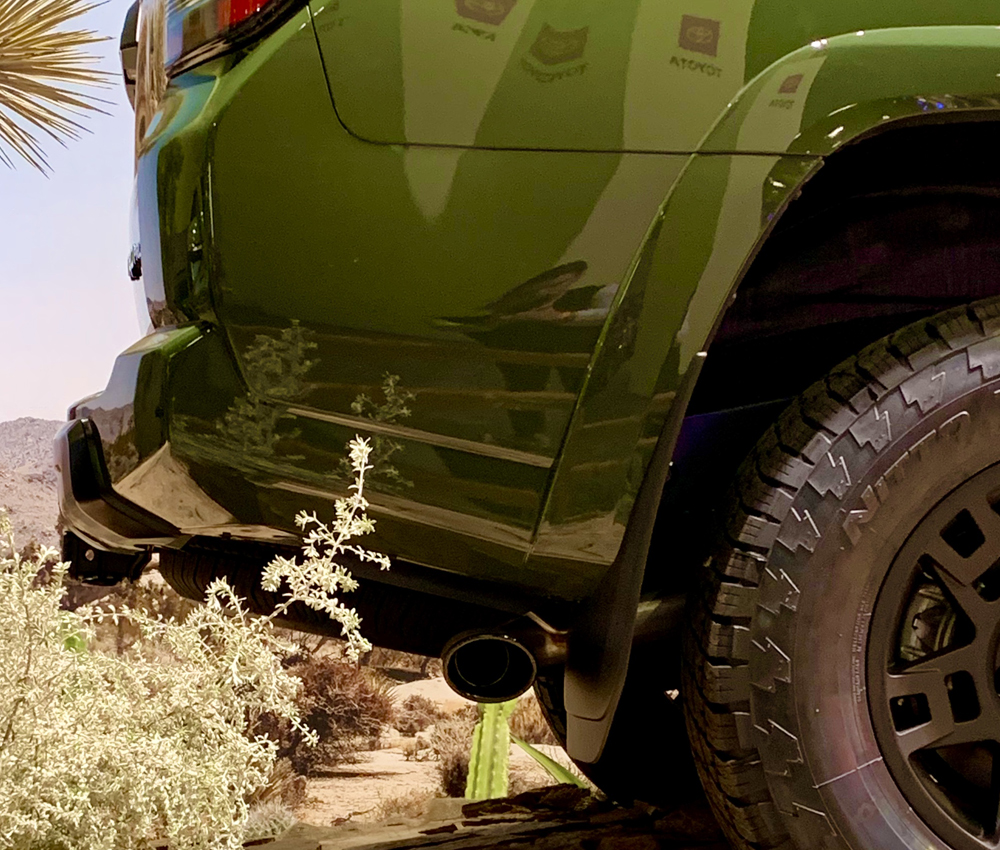 I was caught off guard when I saw the exhaust poking out at me, and I tried more than anything to get underneath the truck but was thwarted by Toyota booth staff in doing so. But I can say it looks to be high quality treated material that is very cleanly mounted.

The TRD tuned exhaust is expected to provide the additional power output you would anticipate.. not much. But hey, we’re not buying the TRD Pro to race. 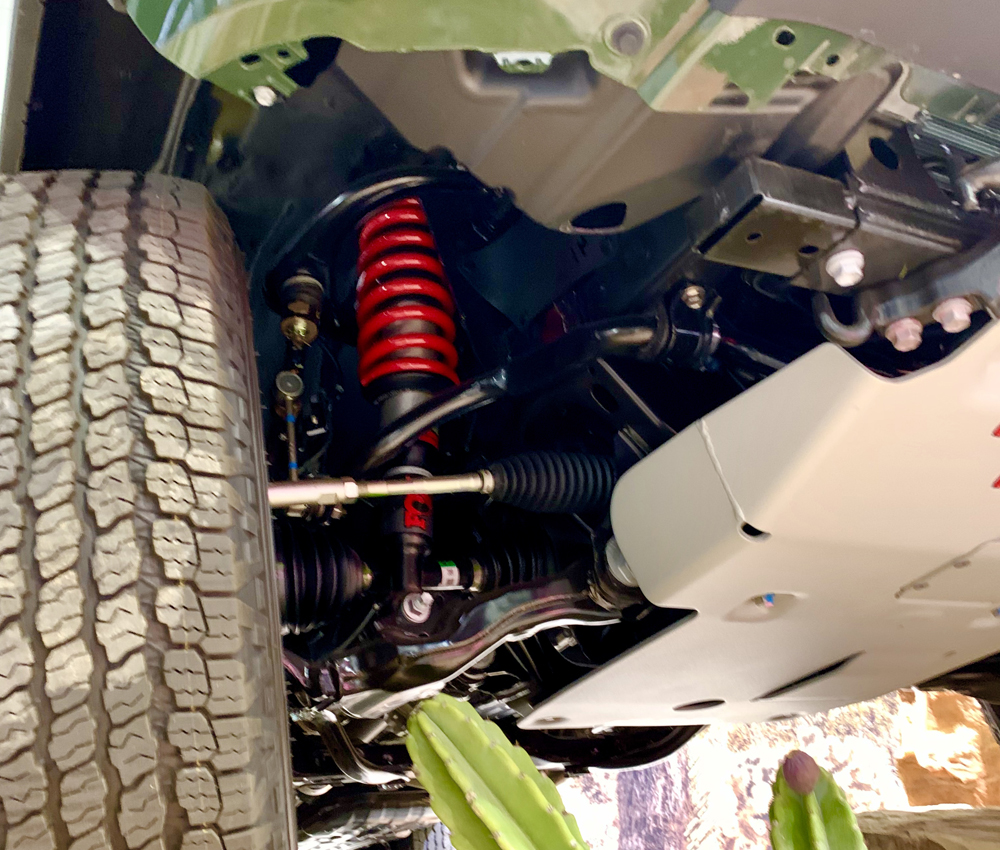 The new TRDs will feature the TRD Tuned Fox Strut system utilizing bypass technology including rear remote reservoirs and TRD tuned front springs as they did in 2019.

These look great and really stick out, so I’m curious to know from a performance perspective how they feel – but there’s limited information available regarding tailoring or any kind of lift/level.

Apparently it’s a 1-inch lift in the front, but I’ve also read a 2.5” lift is more accurate.

I couldn’t get into a good enough position to take a picture of the system on the 4Runner, BUT the Tacoma offered more than a comfortable opportunity which revealed a tubular upper control arm and a really nice looking assembly. 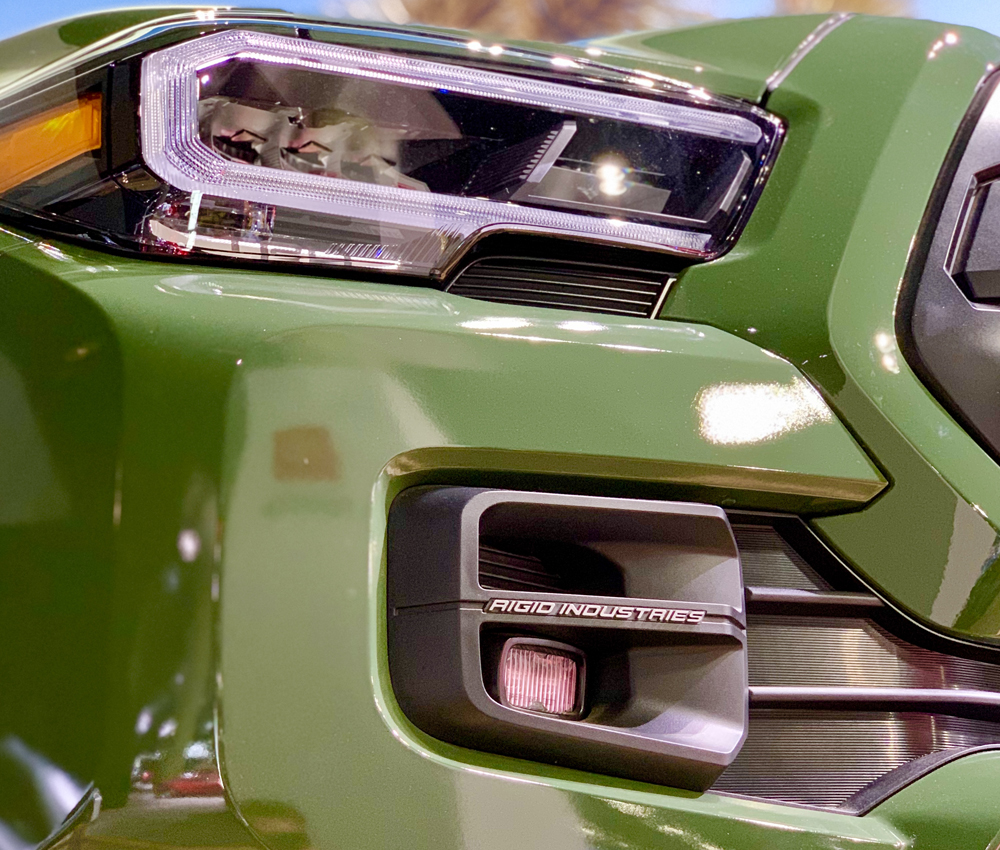 General esthetic remains the same with the Gen 5, and I still like the look much better than the redesigned Rav 4, which people are speculating will be a key indicator of what to look for in G6 (6th Generation).

And honestly, Toyota looks to be creating more consistency in the look of their designs and across performance models – so not sure what to expect.

Here’s the kicker – I was hoping that Toyota would have built a new lighting assembly and fog light setup for the 4Runner, or featured some type of LED running lights to bring the lighting assembly into the present day and begin to transcend across models with something similar to what the Tacoma offers.

I didn’t notice at first (or in 2019), but the Tacoma surprised me as it featured a branded Rigid Industries LED fog light assembly.

While the 4R TRD Pro does offer an LED fog light, the assembly still needs work. 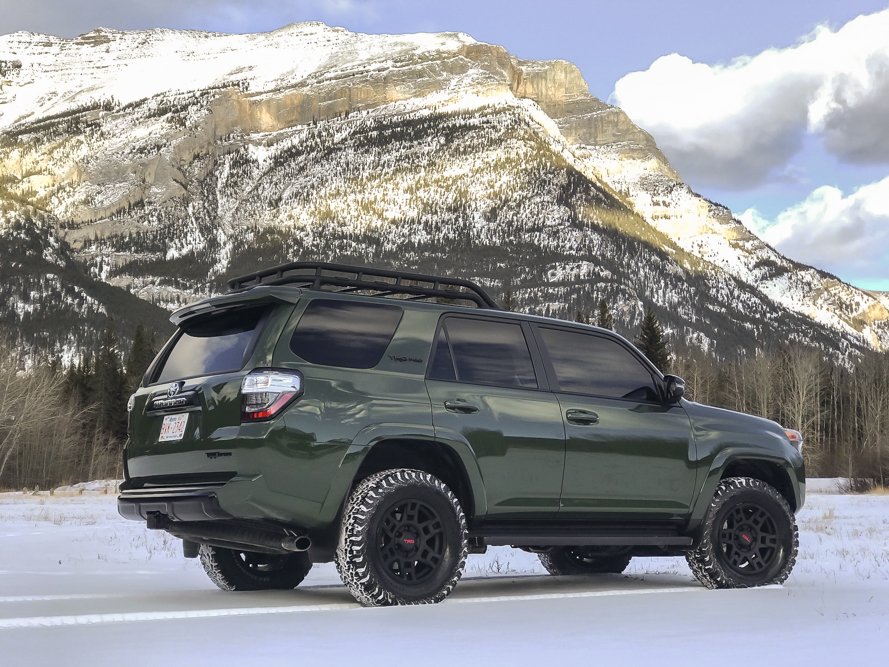 See more of this 4Runner: @4runner_army

One thing I did notice across a lot of the brands, is many OEMs are starting to build off-road builds for their auto show experiences.

Honda had the new CR-V built with an off-road detail, the Nissan Frontier, the Volkswagen Touareg, the new Ford Ranger, Kia with whatever vehicle they’re trying to sell on a Tuesday.

It was interesting to see, but these builds don’t look to be easily customizable and mostly be OEM charged and managed (With the exception of the Frontier).

I’m new to the mod game with my 2016 SR5, but I’m looking forward to what the next generation looks like and what kind of flexibility Toyota gives to its customers in the lineup.

The reason why I bought the ’16 SR5 was that I didn’t want to deal with mod challenges when I was ready to pull the trigger, but looking at new sensor placements and the demand for AI safety technology, there’s no telling what will happen with G6.

Ted McGregor - I'm a busy guy and when I'm not with my family or working in live event production, I like to fly fish or just be outside in general. I put my '16 4Runner to good use with long drives to faraway places and hard work.

So, when is Toyota officially going to transition to the Gen 6 vehicle line?

From what i’ve heard/read, 2021 is supposed to be the year… but Toyota has remained pretty hush hush about it. See this link, it’s likely to fall in line with their current design trends. https://www.tflcar.com/2019/03/2021-toyota-4runner-rumors-fwd-2019-mazda3-and-pet-hair-ask-nathan/