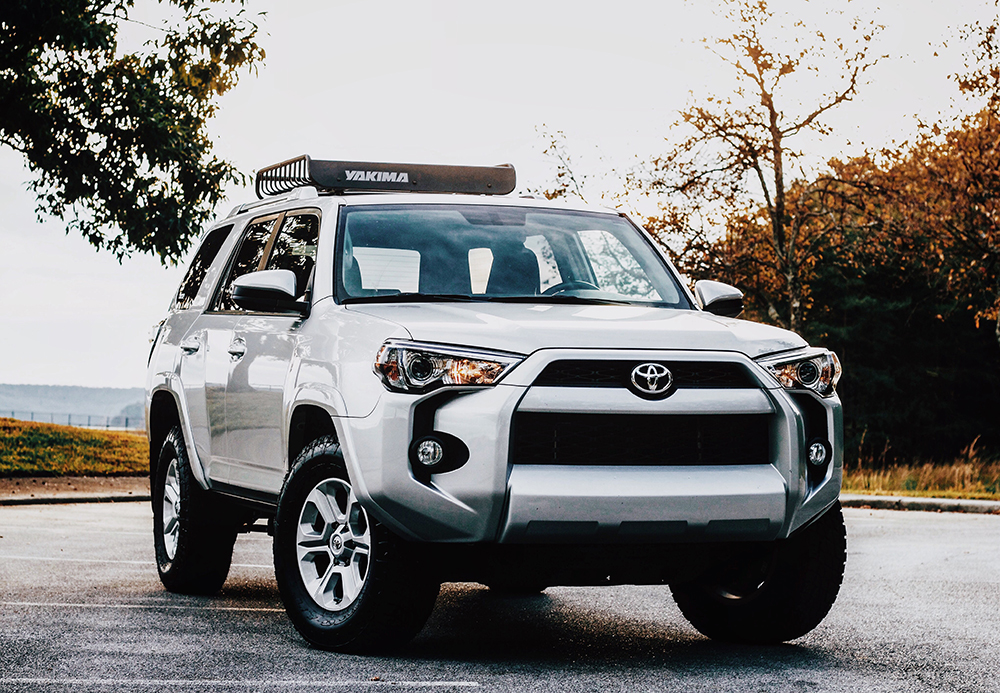 WHY I BOUGHT IT: A few days before a big camping trip to the Outer Banks (North Carolina) I started to pack everything up and lay everything out and by the time it was all accounted for — tents, table, canopy, coolers, supplies, chairs, recovery gear, tools, clothes, towels, games, with 4 people in the car.. I kind of thought to myself: “this isn’t all going to fit.”

I had factory crossbars already installed on my 2015 SR5 4Runner which definitely would have held some of the gear with proper tie-downs, but I decided a roof rack or cargo basket was in my best interest both for this trip and just in general. Having only owned the car for a few weeks, it was my second big addition.

So I started browsing the web and Toyota forums for the best roof racks. Well, being 24 and having recently bought a new 4Runner (we all know how expensive they are) the more discouraged I became when I was finding Gobi Racks for $1,600 and Rhino Racks for $900.

So since we have a local outdoor outlet and retail shop here in Chattanooga called Rock/Creek, I thought I’d go check out the warehouse and see if they had the Yakima Racks LoadWarrior or MegaWarrior, which I had become interested in online because of the $300 price point.

Next thing I knew, I said “why not!” and they were carrying the big box out to my car.

The next day my buddy helped me install it, it only took about 45 minutes to an hour and definitely 2 sets of hands. It’s not heavy just large and awkward and makes it a lot easier to get it up onto of the roof and properly positioned onto the crossbars with another person on the other side of the car.

So here we are, almost one year later! 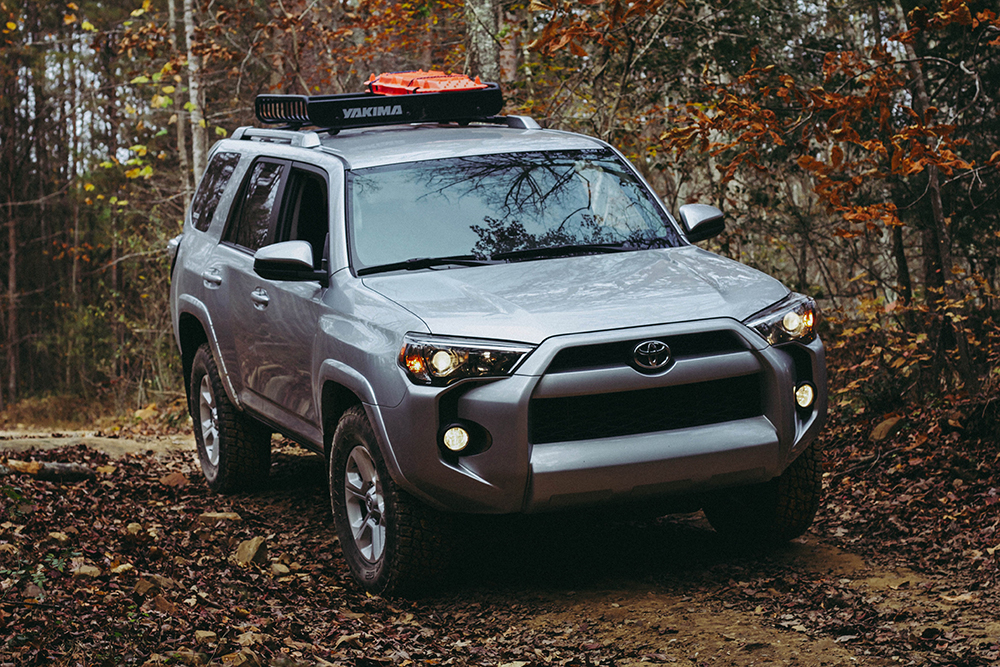 I have never had to touch, move, shift or re-tighten the rack since July of last year. The rack is perfect for what I do and is a staple for my build. It’s what makes my car stand out, and gives it that little bit of umph up top.

My primary uses are for camping, loading up dirty or wet gear, carrying large outdoor toys and honestly, throwing the trash bags into to run them to the dump! It serves it’s purpose well. I’ve loaded this thing up with all kind of gear and it has yet to disappoint. On this OBX trip in particular, we loaded it up with a 6ft table, beach chairs, camping gear, a tailgating canopy and MaxTrax – a few ratchet ties and shovel mount on the side, we were all set.

(That’s another great thing about Yakima, they have an accessory for other gear and add ons too! Like a shovel mount, light mounts, etc.)

So even though as you can already tell, I love my Yakima LoadWarrior – let me give you a few of the pros and cons to see if its the right rack for you. 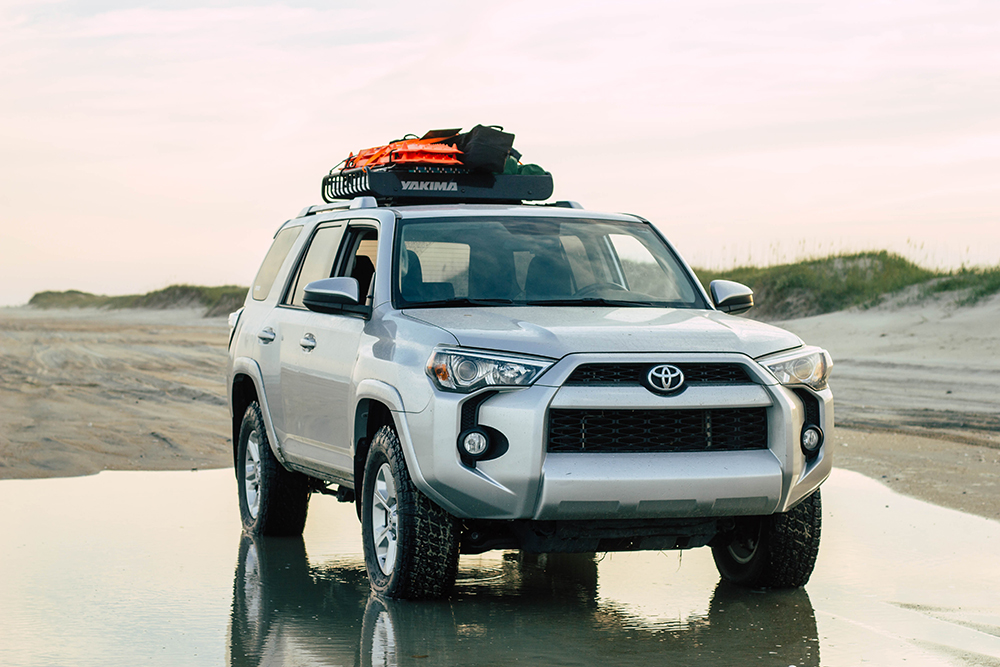 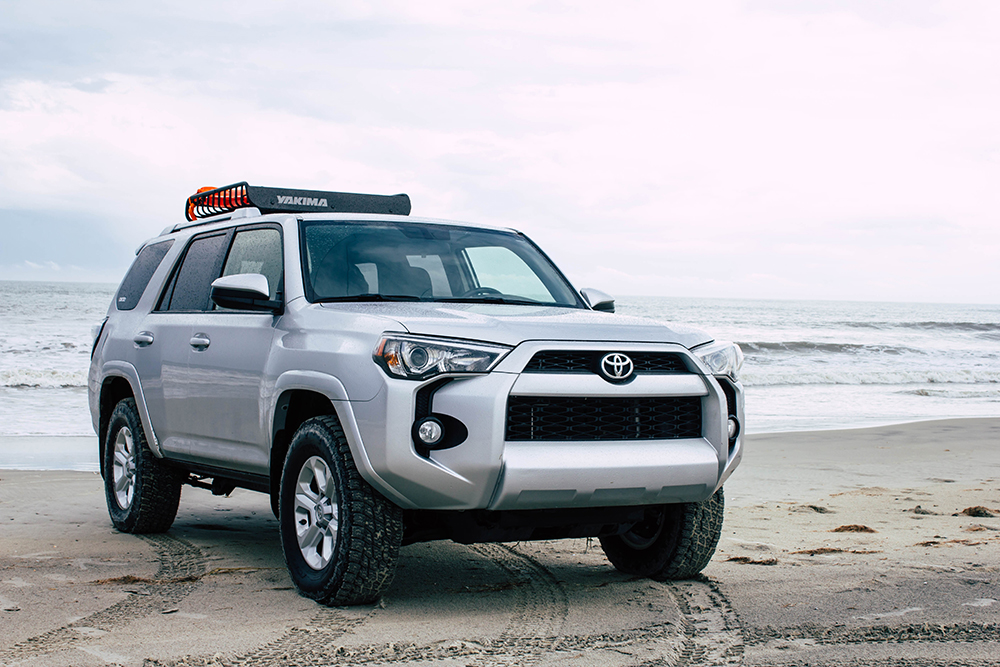 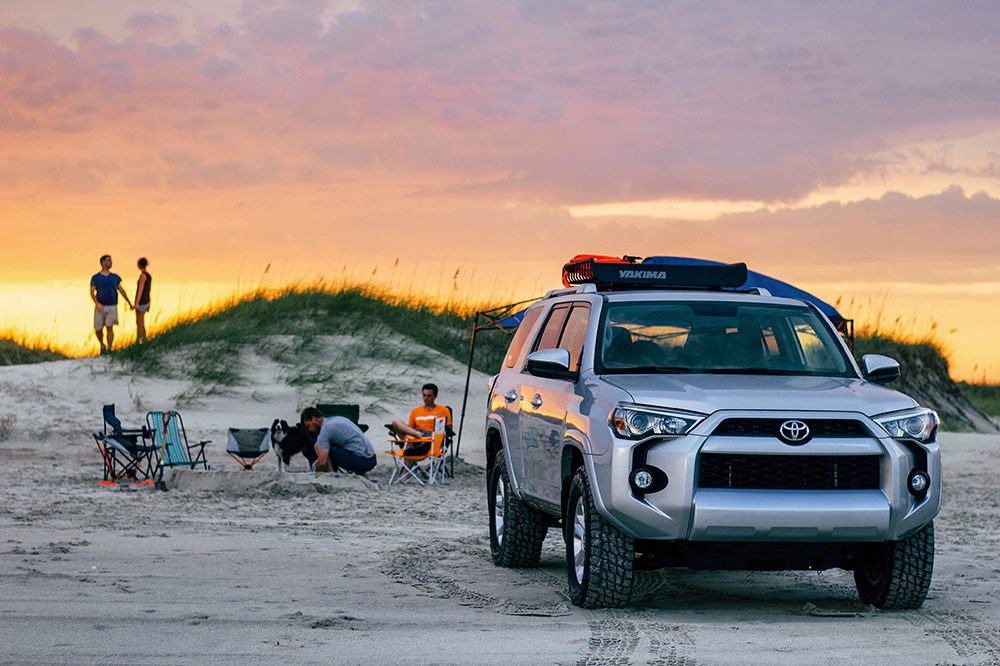 This is a great rack for a great price. Period. I don’t regret buying it at all, and I love how it looks and I love the being able to throw anything up there if I don’t want it in my car. I will likely upgrade to a full-length roof rack at some point in the future, but for now — this is perfect for me and really completes the look of my 4Runner. If you’re on a budget, but need that extra little bit of space — this is the rack for you!

A few shots of the Load Warrior Roof Rack 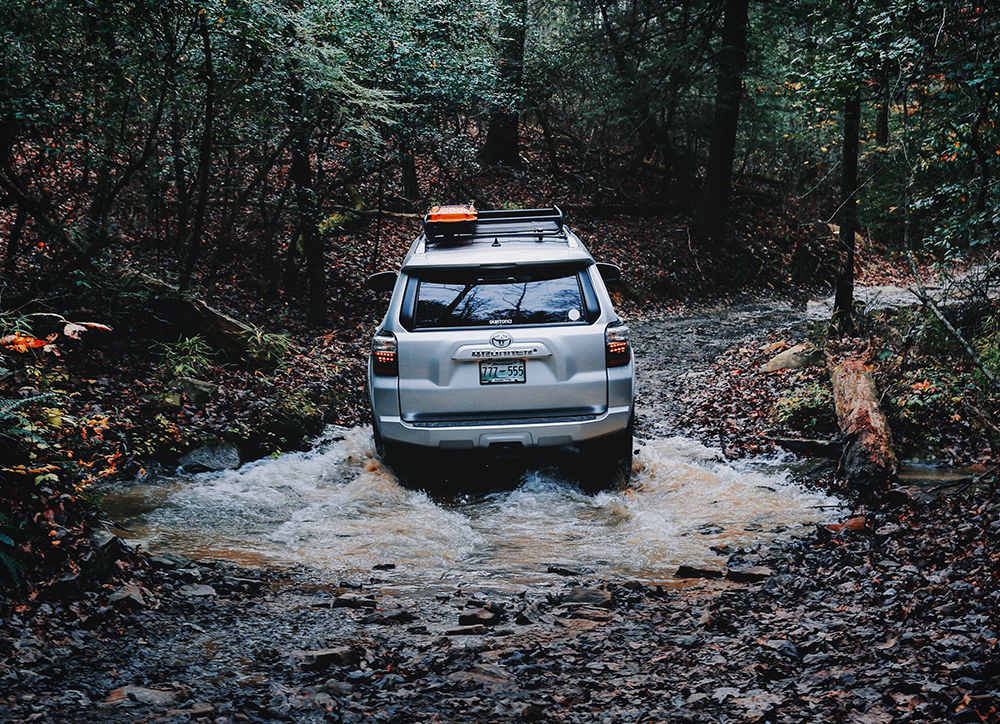 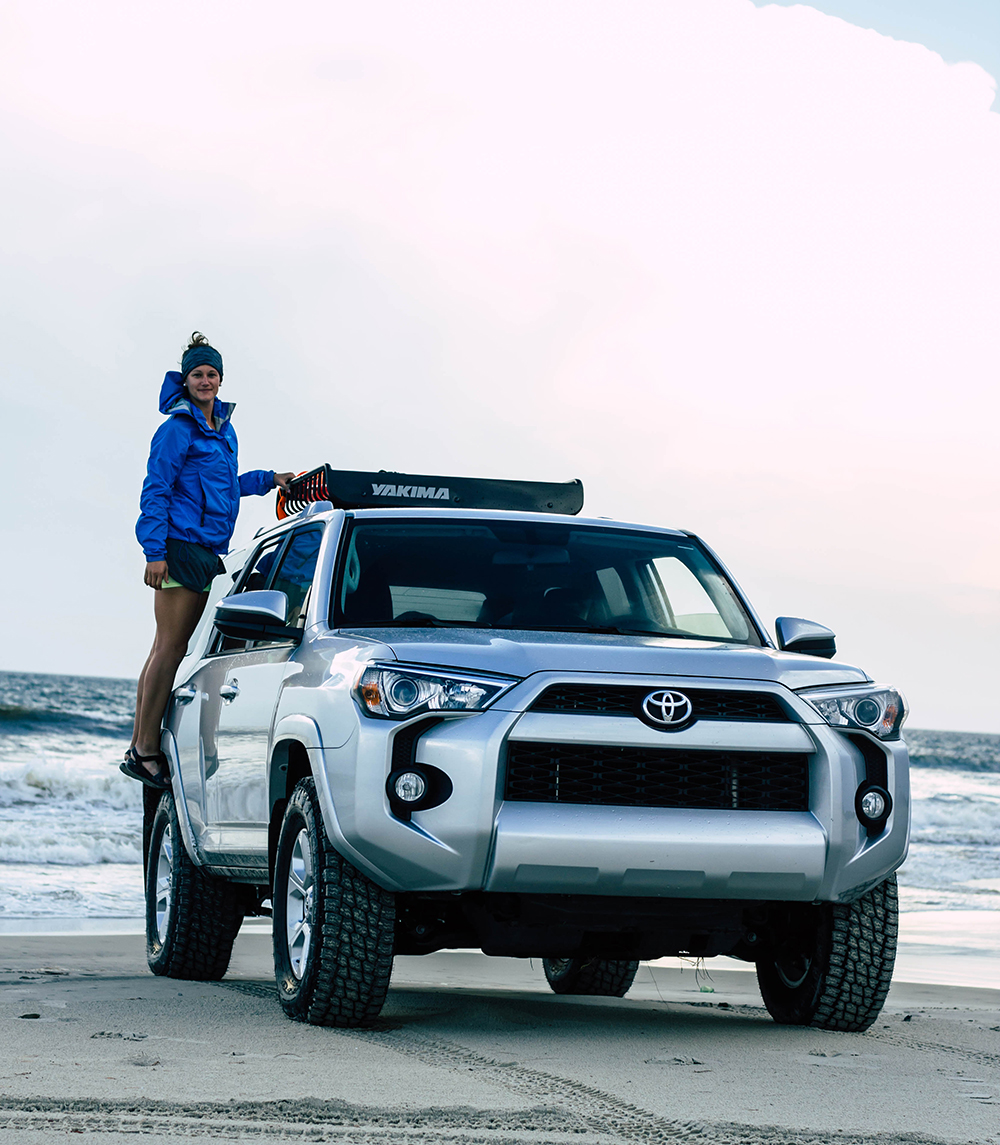 Based out of Chattanooga, Tennessee — I'm a young graphic designer working and traveling within the event production market. I spend my free time outdoors, in the woods and on the mountains chasing life's adventures in the 4Runner with my pup.

Thanks for the write-up.

However, your description says the Loadwarrior is 40″ but the manf’r says it’s 44″.

Also, you have the link & specs for the Megawarrior’s extension but not the Loadwarrior’s.
I would like to see a simple table showing the two products and their extensions, with prices and dimensions next to each. Something like:

And since people tricking out their 4Runners are often concerned with looks as much as function, I would have liked to see a graphic showing what each basket will do to the profile of your 4Runner. A simple set of 4 silhouettes with the baskets on top of each. That way I could tell how far each extends (front/back) on my vehicle and if the longest will block a moonroof.

Lastly, it would be nice if you updated this article with current status of the basket – there are mixed reviews on sites like Amazon re: rust.

Sorry, don’t see a way to edit my comment but the volumes listed should’ve said cu. inches, not sq. inches.

Also, assuming you’re mounting on 5th GEN factory rails (120# limit) you could add more helpful info to the table re: carrying capacity remaining after installing these:

*And that’s before subtracting how much your crossbars weigh.

The 5th gen’s factory crossbars are rated for 132#’s

how difficult are these time wise I guess to take on and off as needed?

Brian – not too difficult. I would say that the initial set up might take 45 minutes with 2 people? And then to take on and off after that – maybe 15-20 minutes? There are a few sets of brackets that have hand-tightening screws so pretty much all you have to do is unscrew those, and take it off!

I have the Megawarrior basket, and I found that on my 2012 Trail Edition (different factory roof rack on 2010-2013 Trails), the basket would just make contact with the factory rack. I padded with some of the foam wrap that I had from some shipment or other, and it did not cause a problem. Just a caution to those who might want the bigger rack. Of course, I don’t know how it would fit with the current standard rack. I don’t leave the basket on all the time, so can’t say about mpg loss.

I bought the same rack for my 2018 TRD Off Road and totally love it as much as you love yours. I haven’t loaded it with camping gear yet but have not doubts it will do the job. Thanks for sharing your experience with this great product. Happy travels!

Rob – so glad you love yours as much as I do! It’s truly a great rack for a great price. It will most definitely get the job done when you decide to load it up! Happy travels to you too!

Sarah – great write-up. I have been looking for a basket style rack for awhile and so tempted to pull the trigger on this rack. If you could do it over again would you have gone with a load warrior or the mega warrior? Also, any closeup shots of how you are mounting your gear? Thank you so much, this is putting me close to the edge.

I’m personally glad I went with the load warrior, I think it’s just the right size for my car. Especially width wise – I think it’s a perfect fit in between the runners, whereas the megawarrior might actually extent over and outside of them.

Most of my gear is just loaded actually in the basket and tied down or bungee’d down. When I carry the maxtrax alone on top, there’s just a simple bungee cord holding them down! And before I got the Yakima shovel bracket, we simply used zip ties to mount the shovel! But here’s a link to the bracket I have now so you can see it.