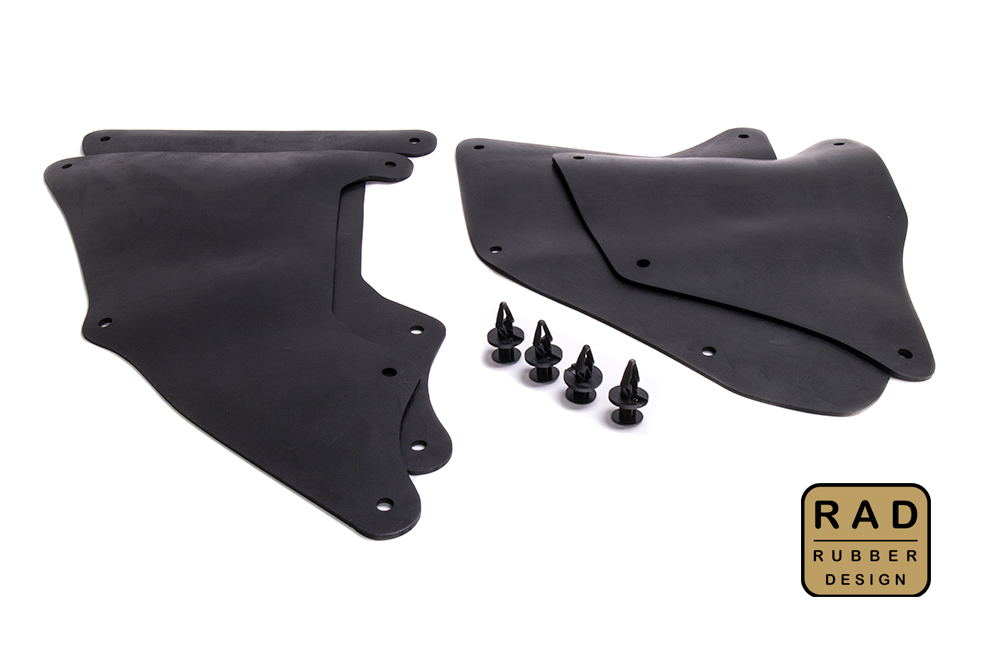 If you are looking for new rubber guards, you have found the right company. Rad Rubber Design makes a wide variety of splash guards for multiple Toyota trucks. Let’s jump in!

There is a big problem with the stock 4Runner, FJ, Tacoma and Tundra Guards. They suck. After you upgrade your suspension and remove the factory engine splash guards, you will run into a few problems.

When you are upgrading your suspension and upper control arms, you have to remove the factory Toyota engine splash guards to remove that long UCA bolt. By removing all of the push tabs on the Toyota engine guards, you risk breaking a few here and there. We did.

If you break the push tabs on your factory guards, you either need to buy new ones directly from Toyota or hold your engine guards together with duct tape or something. If you break your push tabs and try to push them back in, it will work but you will additional problems. They rattle. 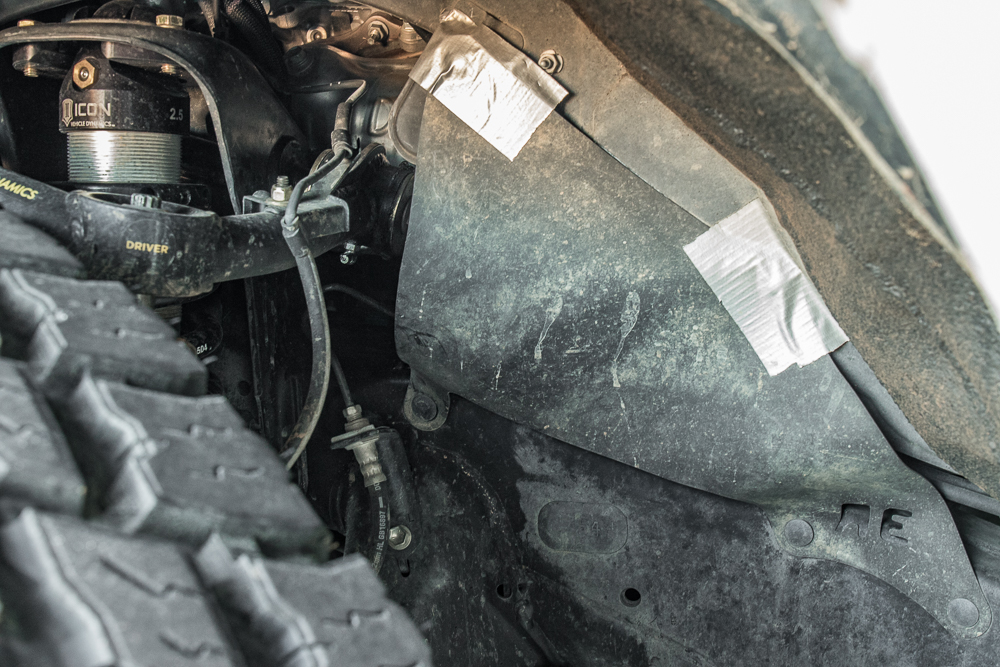 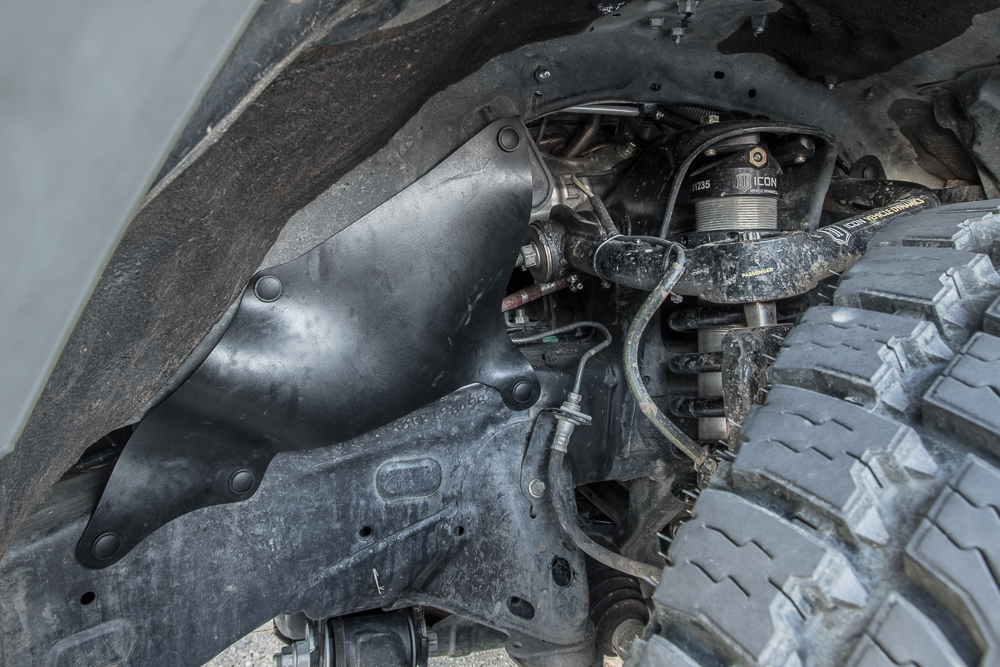 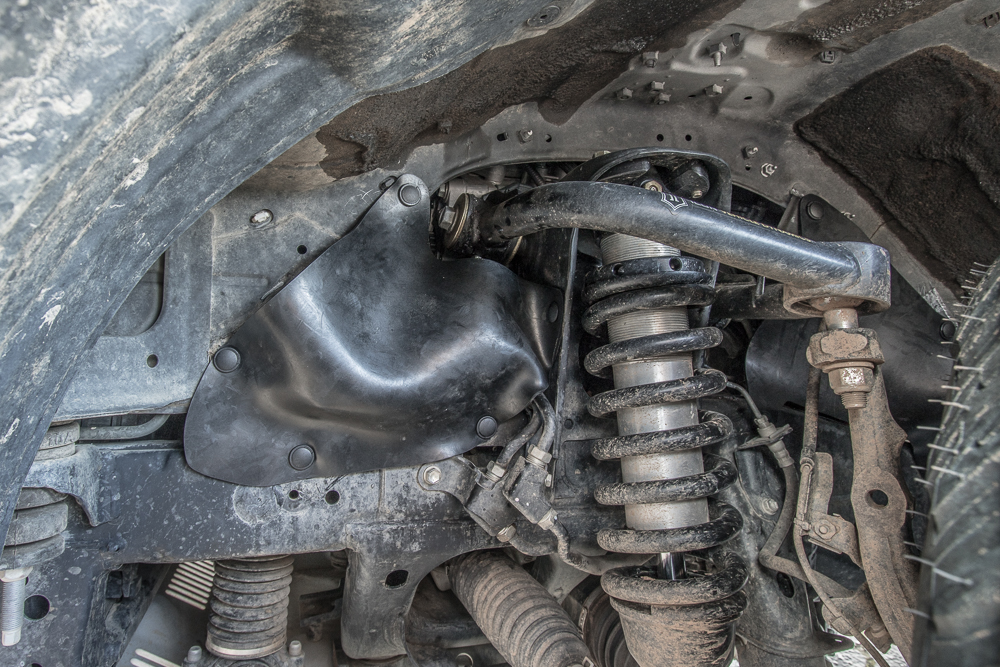 Rad Rubber Designs might be the only company that makes aftermarket splash guards. And, these guards kick ass. They are made of incredibly high-quality rubber and all hand cut. To be specific, the Rad Rubber Design guards are a Heavy Duty replacement set (4 pieces) for both driver and passenger side wheel wells made with 1/8″ Nitrile rubber resistant to gas and oil. Fasteners included.

They are based out of Floria and make 4Runner, FJ Cruiser, Tacoma, and Tundra guards. They also make engine splash guards for GX models and if you reach out to them, they might be able to make something custom for your application.

The overall install for the Rad Rubber Design engine splash guards is pretty straightforward. You always have the option to remove your tire to make more room for the install but you don’t need to. And, it might end costing you more time than it’s worth.

Instead of removing the tires, you may just want to turn your wheel hard-passenger or hard-driver in order to get a little more room to work with. By turning your wheel driver or passenger, you can create a little more space for the rear or front wheel well.

You start by removing the existing guards and you don’t need to worry about saving the fasteners as you will be replacing them with the new ones that are enclosed in your package. A common panel fastener clip removal tool is the best way to remove the fasteners.

Using the diagram that is provided in the instructions by Rad Rubber Design, you can line up the appropriate rubber piece with the right location and attach using the enclosed fasteners. There are 19 fasteners needed to attach the guards with 17 of them being 5/16″ and 2 of them being a 1/4″.

It is important to note that there is supposed to be slack or a ripple effect in the rubber guards, this allows for movement as the guards attached to the frame on the bottom but to the body at the top. This flexibility adds to the strength and overall durability of the aftermarket engine guards.

The Nitrile Rubber cut by Rad Rubber Design is a family of unsaturated polymers with qualities of superior strength and high resistance to oil, gas and most chemicals. It has a natural black unfinished appearance which makes it ideal for mini automotive applications. 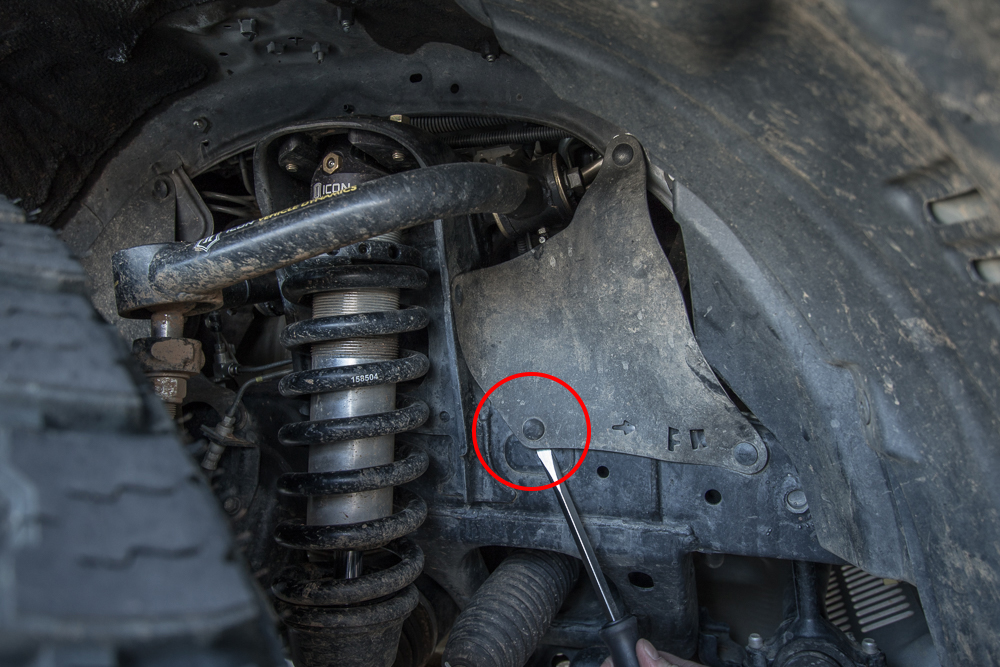 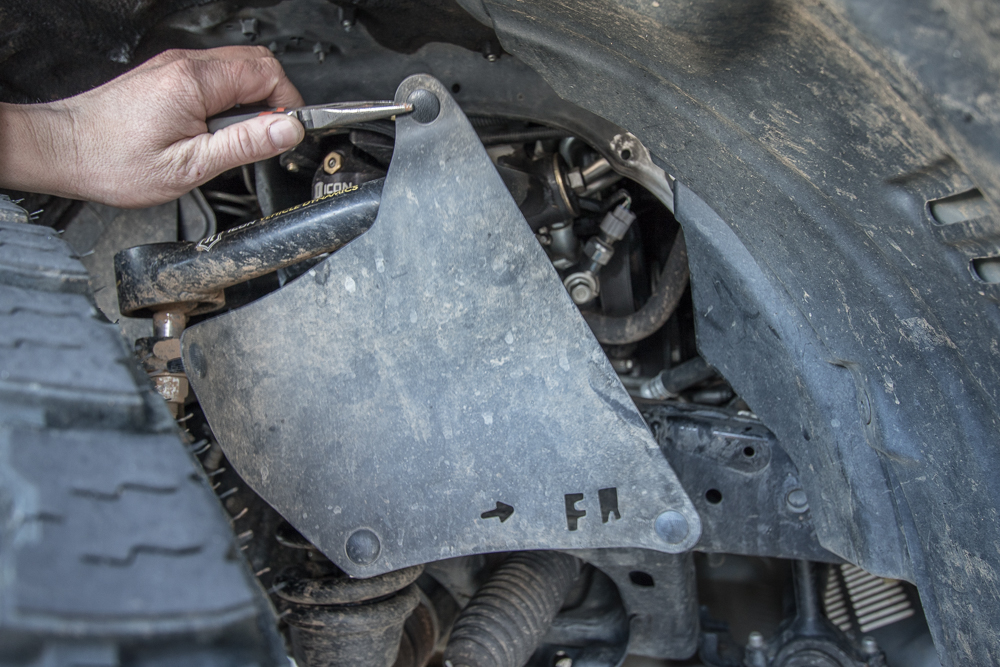 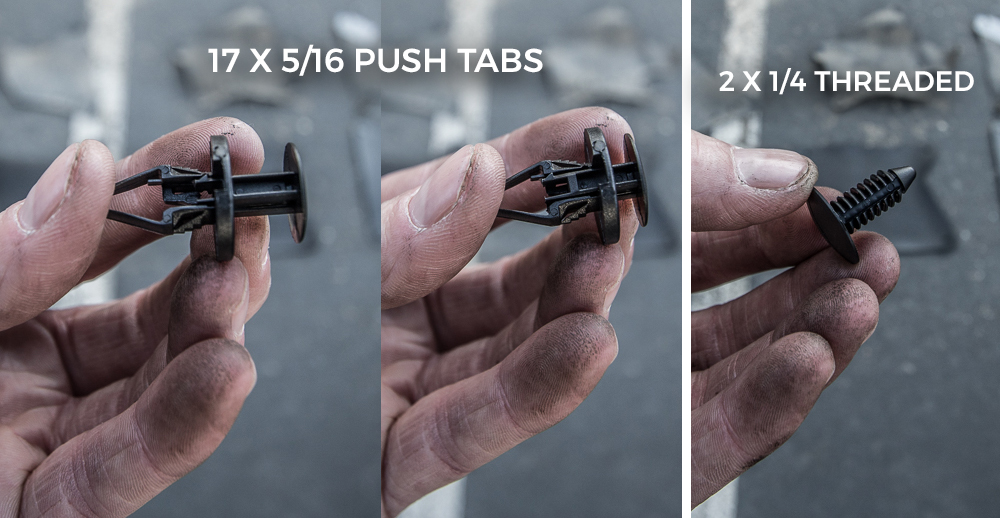 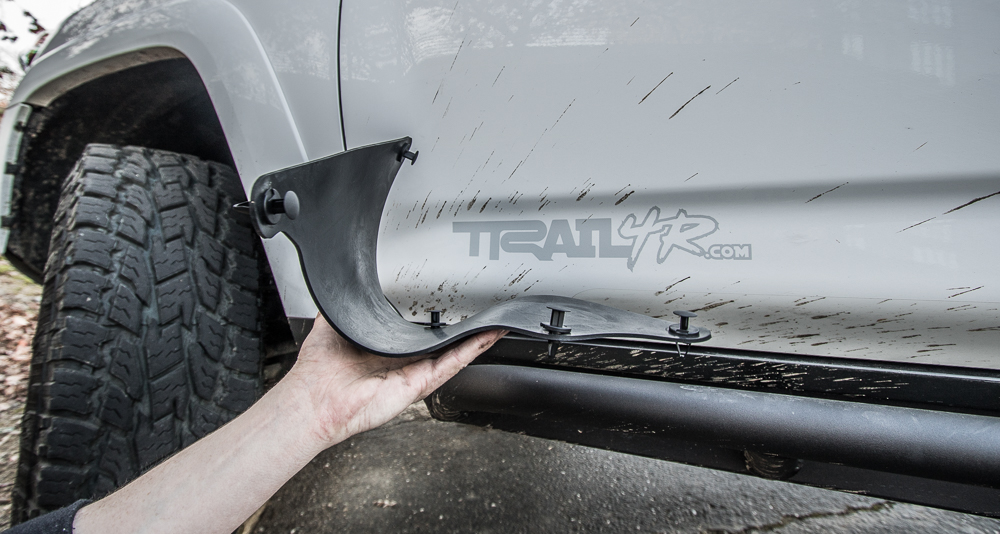 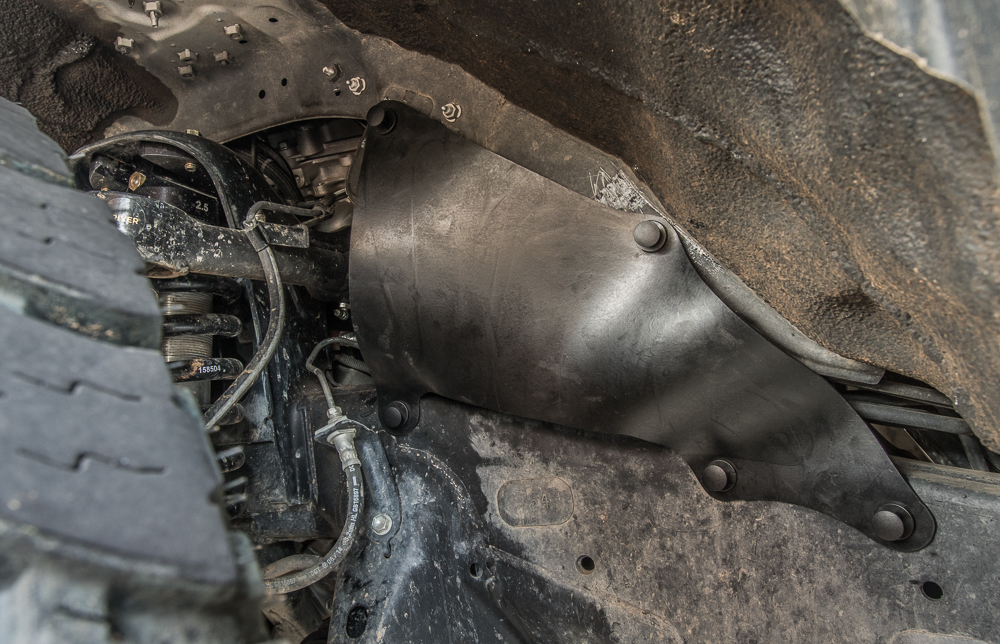 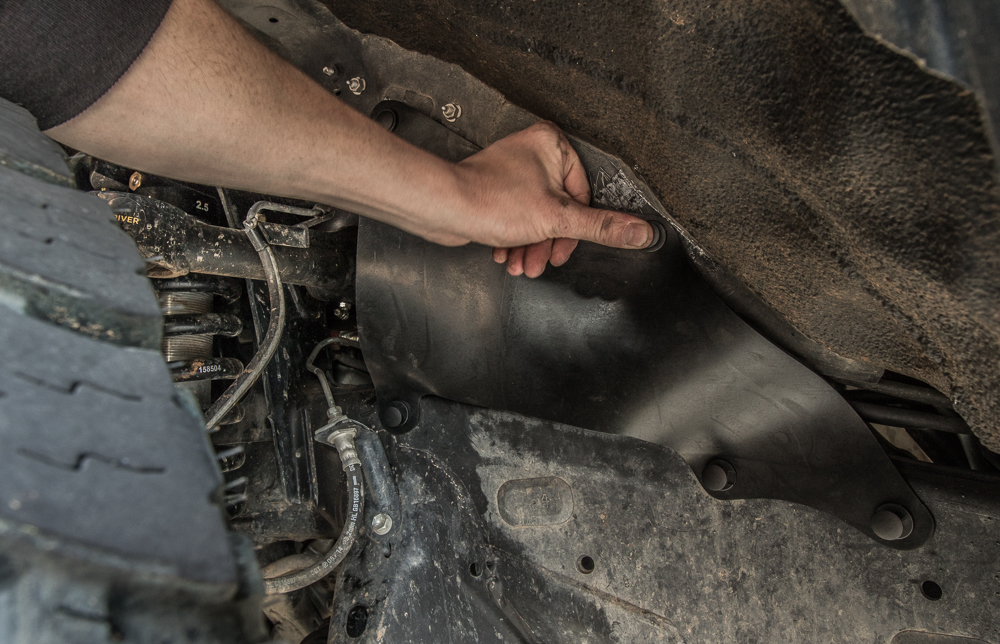 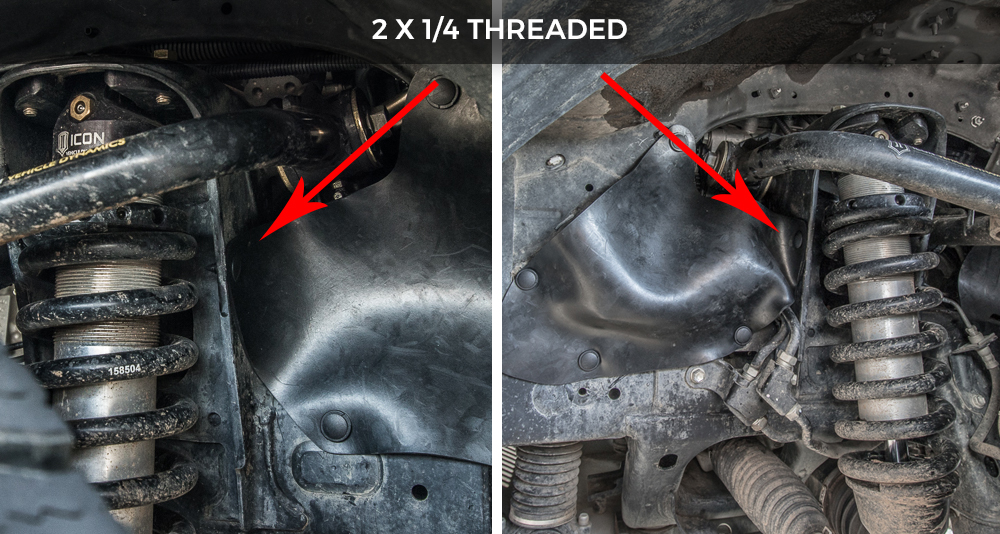 Thanks, Rad Rubber Design – Kick Ass Product and worth every penny! The only thing I would recommend is sending an additional push tab. I almost broke one.

How do the threaded fasteners come into the play? The pictures are hard to tell how these get installed, I ended up leaving them out. I installed these today and broke a few tabs so had to order some replacements. Also some of the push tabs were not very easy to push in had to hammer them in, is that normal?

Looks nice, maybe they will come up with some design for the fender liner cuts that are made during an install on the Gen 5 stage 2 fender mod that SSO offers.