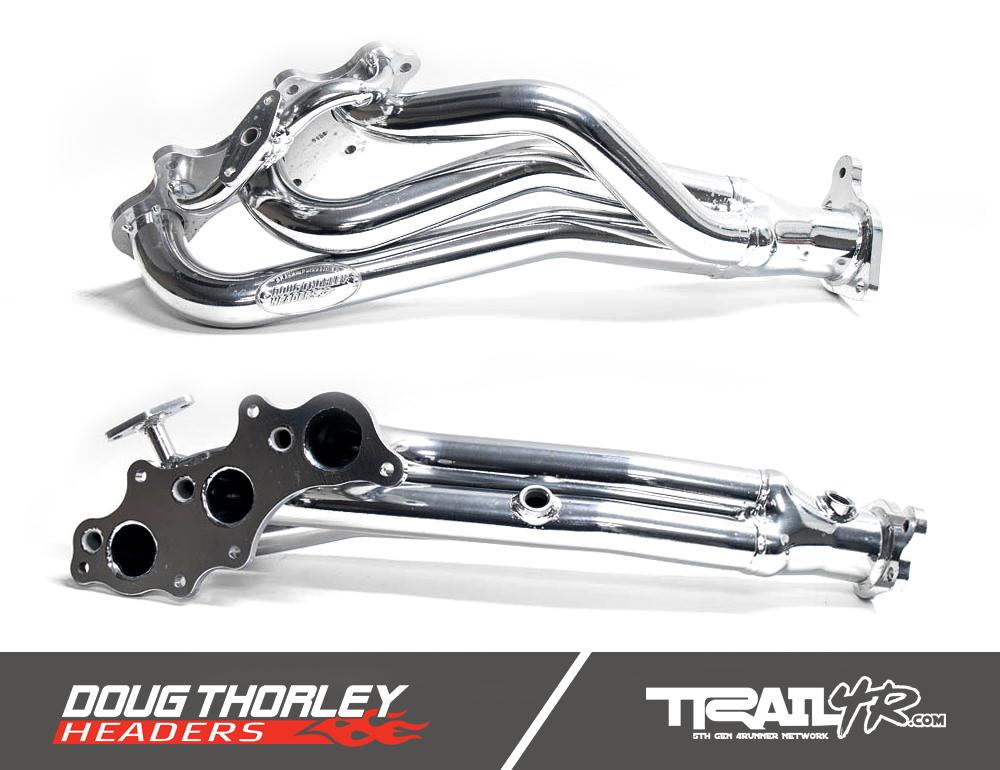 Doug Thorley Headers on 4Runner – 5th Gen 4Runner Headers Overview and is the Install worth it?

When it comes to power on a 4Runner, well there’s not much of it. But, we do have plenty of options to increase our horsepower and torque. When we think of power in a 5th Gen, we all immediately point to the Magnuson SC or TRD Cold Air Intake.

Then, we might start looking at a Cat-Back exhaust system. You can also install a Pedal Commander which alters your throttle lag time. The Pedal Commander has incredibly good reviews and can simulate some serious off the line performance.

Buy a set of these headers:

Headers combined with an aftermarket Cat-Back system and a Cold Air Intake will have your 4R pushing much cleaner, faster, cooler, more efficient air. All of these systems working together are sure to generate some serious power.

Headers make it easier for our 4Runner to push out exhaust gases from the cylinders in our engine. Headers work by eliminating the manifolds back-pressure. Instead of sharing a common manifold, each cylinder gets its own exhaust pipe.

The Doug Thorley Headers are not street legal in California. Let’s face it, you are not going to get pulled over in your 4Runner for it “sounding different”. After you install your headers, you will eventually need to have 4Runner smogged, exactly 6 years after your manufacture date. We have a 2014 4R, so we will not need to have our 4R smogged until 2020.

When you install your Doug Thorley Headers, you will need to grab a tuner. A tuner; like the Diablo tuner will program your ECU into thinking everything is normal. Yes, things will change. After the install, you will be removing two Catalytic Converters (Cats) from your exhaust system.

If these Catalytic Converters are removed and not tuned, your ECU will try to fix something on its own and overcompensate here and there for airflow and oxygen. This may be seriously harmful to your 4Runner. So, it is important to get a tuner after your install your DT Headers.

As we mentioned above, you will need a tuner. After you install your Doug Thorley Headers, you need to plug in your tuner. Run your 4Runner and let the tuner gather it’s new data sets.

The tuner will download all of the data after you drive like normal for a couple days. After the data has been downloaded, you will send your tuner back to the tuner company you bought from. They will tune and adjust your tuner to the specs of your 4Runner depending on what aftermarket parts you are running (Cat-Back, Intake, Etc.).

The tuner company will send you back your tuner and you can plug it in. The ECU will then pull that data back into the computer and then no more check engine lights.

Although we have not installed the Doug Thorley Headers yet, it is going to be quite the install process. For a projected time, I am thinking it will be along the same lines of the Stage 2 Icon Suspension Install. This install took around 8 hours. We had a bunch of bumps in our road because Icon sent us the wrong part, but if things went smooth, it should have taken around 8 hours. For the Doug Thorley Headers, I am projecting a similar time.

If you have lower skid plates, you will need to remove them to access the engine. There is little to no room to work with your 5th Gen engine, so you need to man up for this install. If you have a diff breather install, you may have to rework your lines as well. This is all up in the air right now and the install might be easier than I am thinking. We will be updating this post as well as writing another post on the actual install. As always, we will keep you posted

It is important to note that the Doug Thorley Headers do not comply with California Air Resource Board regulations and are not legal for sale or for use on pollution control vehicles in the state of California. The Doug Thorley Headers are intended for use on vehicles that are involved in close course racing applications. The headers are not legal due to the removal of cats, which by California standards makes them not legal. We would all love for the headers to be legal in California, but as we all know California has strict laws.

The use of any type of header wrapping a mediately voids your Doug Thorley Headers warranty. Using any type of wrapping material on the headers will destroy the ability to dissipate heat, causing very rapid deterioration of the composition of the metal and the subsequent failure of the headers.

Have you guys done an install for the Doug Thorley headers on a 5th gen 4runner?

I went full straight pipe. DT long headers, AFI mid-pipe and Borla catback…. no cats at all. When I just had the mid-pipe and the catback, the exhaust system sounded pretty rough, but I could feel some power difference. Adding the Long Headers was the clincher. The sound got deep and tough and waaaay quieter, to my surprise. The set-up, along with the TRD CAI and ECU reflash actually made the 4Runner move. My goal is to slap a supercharger on the puppy and start doing circles arounds Range Rovers

Has anyone done this install yet?

Will let you know in a couple of weeks, after I tune the puppy

What are you tuning with?

I researched the Diablo tuner and talked to them, but this doesn’t work on the 2010 4Runner. I went with Vivid Racing’s ECU reflash (fuel to air, etc.). Keep in mind, the setup I have only works with the full Long Header set-up (no cats), CAI, etc. The car is fast. lol. people get kind of confused when they see this car bone out. Super charger is the next and final mod….

Brenan
Any updates on installing the Doug Thorley headers? Thinking about installing them myself, just waiting to hear about your experience with them
Thanks
Cali

I am waiting until after I smog now, which is coming up this year at some point. I waited a little too long on that one.

Are you installing long headers? If you’ve done it already, please let me know how you like them.

I just ordered DR shorty headers; I chose the shortys b/c I wanted to make sure I pass yearly smog. I want to complete as much of the system as I can.

Do you recommend a DT U/Mid Pipe? Will it create more power? Will I still be able to pass smog in Texas?

Thanks for your great site. It’s been a great source for me!

Right now, I have a Borla catback and an aFe Y pipe on the 2010 4Runner. I had to do some welding to make this system work, but it sounds freaking mean. Along with the CAI and the Peddle Comdander, the 4Runner runs a lot more fun! This system, as is, passes the smog check in TX. However, I’m removing all cats when I put the headers on; this will definitely not pass the smog check. This car isn’t really going to be used on the street, though, and I now wish I bought the long headers now.

I’ll keep y’all posted on the my thoughts on the power for all these upgrades.

Also – I’ll keep you posted on how well the Diablo Tuner works.

Correction: Diablo only makes tuners for models up to 2009. I’m talking with a company called UTune and will keep you posted.

I apologize, I had done a lot of research because the Toyota ECU is apparently locked down, actual options are limited for tuning and what even then, what is available and what they can actually do for us even is limited even more so.
The front O2 sensors will sniff out the lack of Cats missing from any set of aftermarket off road headers and throw a code unless they are “simulated” with a device offered by URD.
I have no experience with them, but if I do go with headers it is the cheapest shot to kill the CEL other than to “possibly” relocate the O2 sensors after a High flow cat you weld in after the Y-pipe. Even with that I am not sure if it would throw a CEL. I’ll let you know how the Y-pipe and Unichip work out.
Best-

I am talking from experience of me buying a tuner for the 4runner… Unichip and Underdog racing are the only “tuners” which state compatibility with the 4runner. Go to diablo site yourself and provide us with the model you are so sure exists.

Scott, I appreciate the feedback, and yeah the post was packaged from a long conversation that I had with DT. You just came across like a dick, so I had to as well. No, I have not installed the headers yet. I didn’t have any reason to NOT believe what DT was telling me at the time. Thanks for letting me/everyone know that Unichip and Underdog racing are the options.
Cheers.

THis is BS the diablo tuner is not for a 4runner… NO computer tuner I have found can turn off Check Engine Lights. If you are eliminating Cats, you need simulators.

Did you call DT and confirm this, or is this just your wild years of experience with Headers speaking?

Why does Diablo Sport not even mention the Toyota on their site? What did I (or you) miss since posting this? Thanks.

Good question.
That is who DT initially recommended for a tuner. But, you are right. I will reach out to DT or you can and see what they say.

What tuner are y’all talking about. I can’t find one that supports the 2013 and up 4Runners.

DT recommended the Diablo Tuners, check them out for more information.

I did all these installs on my Mustang. Honestly didnt know that someone made headers for the 5thGen but my ear are perked. Who is the go to Tuner after install? Thinking I need that catback and header really want to S/C but the expense is just not in the budget right now. Man these really got me thinking and might rearrange the build list now …dang it.

Michael,
Yeah, these headers are going to be sick! We will be installing them sometime late December. I just need to find a weekend for the install. After talking with Doug Thorley, they recommended the Diablo Tuner. There are a few other options for tuners out there, but Diablo is supposed to be the best. Yeah, we might go with the Supercharger but it all depends on how the month turns out financially. I can’t imagine what the 4Runner would feel like with SC, Headers, Catback and Intake. WOW.

Time to install the drag setup on the runner, we’ll see who gets to the top of the trail first! She is no longer a runner, she is a sprinter!

This is why I love this site. Informative info WITH PICTURES. Come here almost daily to see what I need to do to my rig next! Forever loyal to trail4r.com

ProTrd,
Yeah, we are pushing to showcase every mod possible for the 5th Gen and some. Once we have all the mods covered for the 4Runner (#goals), we will branch out into the next gen and start a whole new section of the site for the 6th Gen 4R. Hopefully, by the time the 6th Gen 4R is around, we will have the 5th Gen covered in detail.

Mitch,
Right. Installing the DT Headers would be a substantial increase in power. That combined with an intake and exhaust would be awesome.