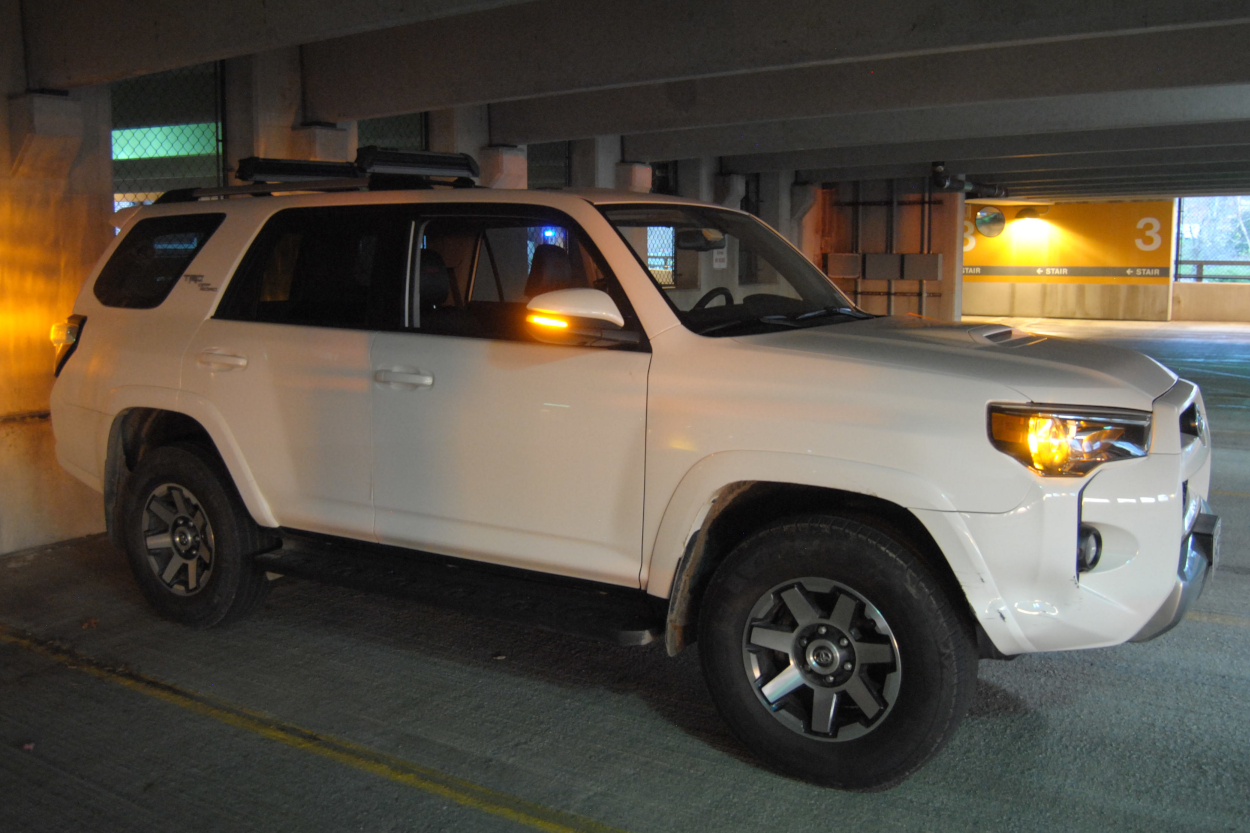 Everyone complains about no one else using their turn signals properly, while never considering whether or not they themselves are using their turn signals properly. But the same lights that indicate (or fail to indicate) your intent to turn are also used as hazard lights when you’re trying to make your vehicle as visible as possible. This is what lead me to the Mid-Atlantic Off-Roading Smoked Mirror Turn Signals.

By upgrading from the stock mirror turn signals, I was able to achieve two desirable improvements:

See, as much as I love Toyota’s Super White, I live in snowy upstate New York which means much of the year my 4Runner just kind of blends into the background. So I’m game for anything that increases my visibility when stopped on the side of the road. 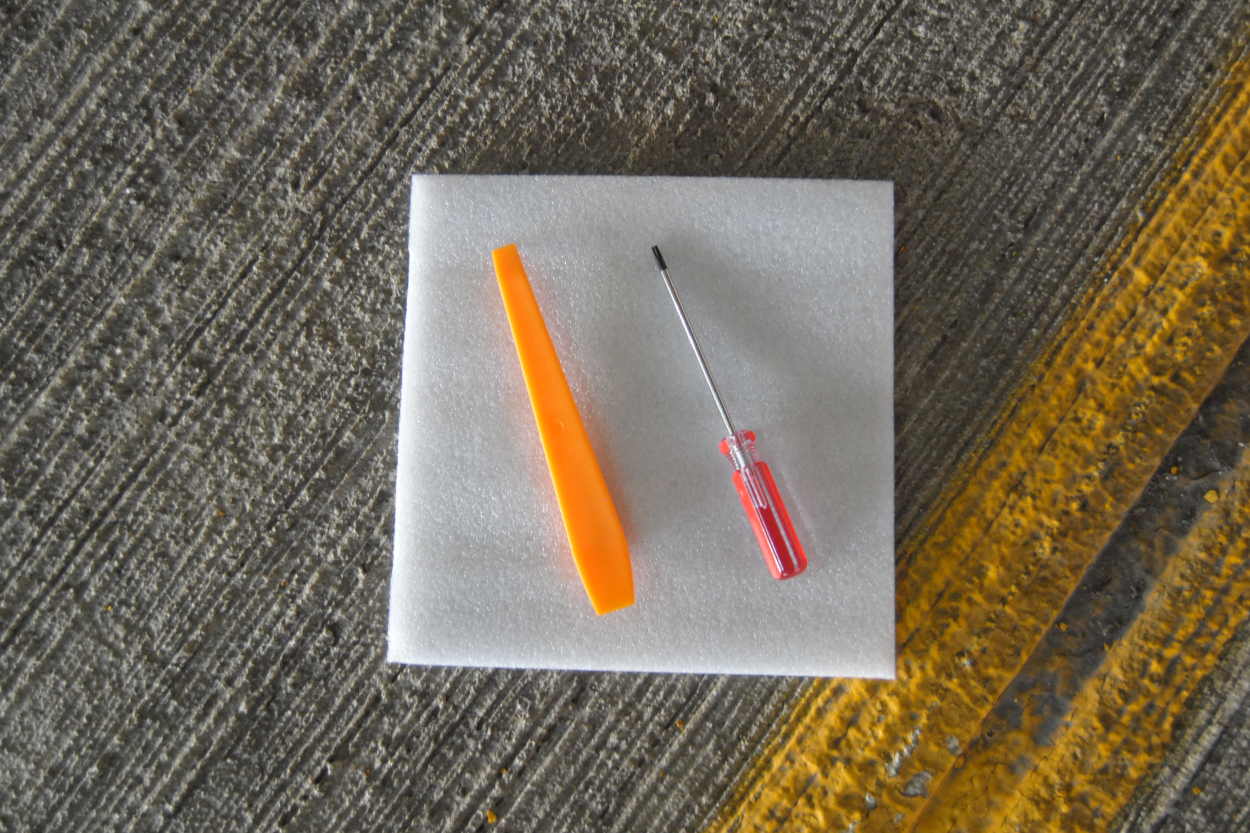 Mid-Atlantic Off-Roading included these two tools in their Smoked Mirror Turn Signals kit. One of them is useful.

If you’re done any work on the exterior of your 4Runner, or any vehicle for that matter, you probably already have an auto trim tool.

Possibly a whole kit of them. But unlike the tools you already have, the one included with the Mid-Atlantic Off-Roading Smoked Mirror Turn Signals kit is sized for a specific purpose. It’s just narrow enough to fit into the mirror housing when you’re popping off the body-color mirror cover.

Less helpful, though not particularly unwelcome, is the screwdriver. Unlike the trim tool, it doesn’t fit perfectly. Not on the screws under the mirror cover, or on any other screw used by Toyota that I’m aware of. A curious inclusion, though whatever normal #1 Phillips screwdriver you already have will do the job perfectly well. 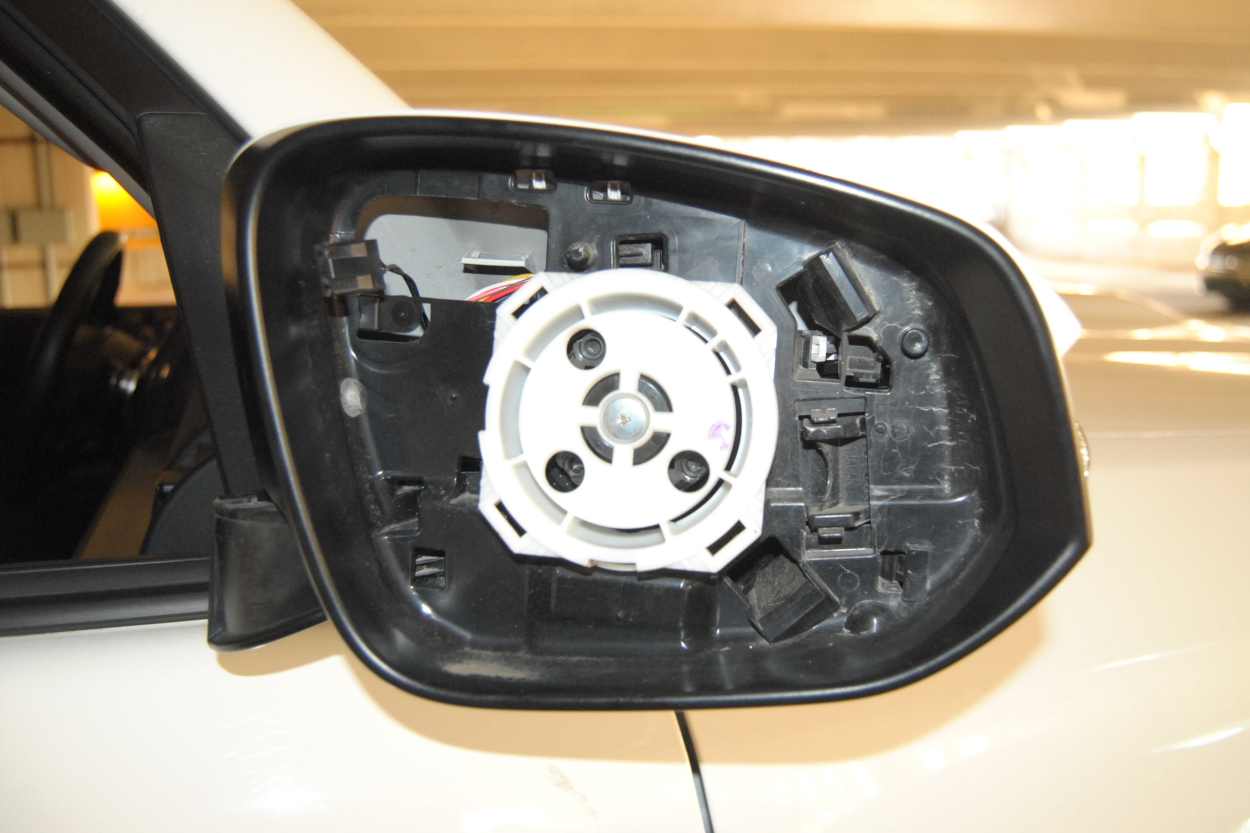 This is easily the scariest part of the process.

Now, carefully (but with more force than you’re expecting to need) pull the mirror away from the housing. It is held onto the white mounting plate shown above with just four spring clips, and with relatively little trouble it should pop off. Folding the whole mirror housing forward (so the mirror is facing away from the 4Runner) may help with this step, and many other steps for that matter.

One thing to be mindful of is the wiring harness that provides power for your heated mirrors. Extra care should be taken when removing the upper inner corner of the mirror in order to avoid damaging it. 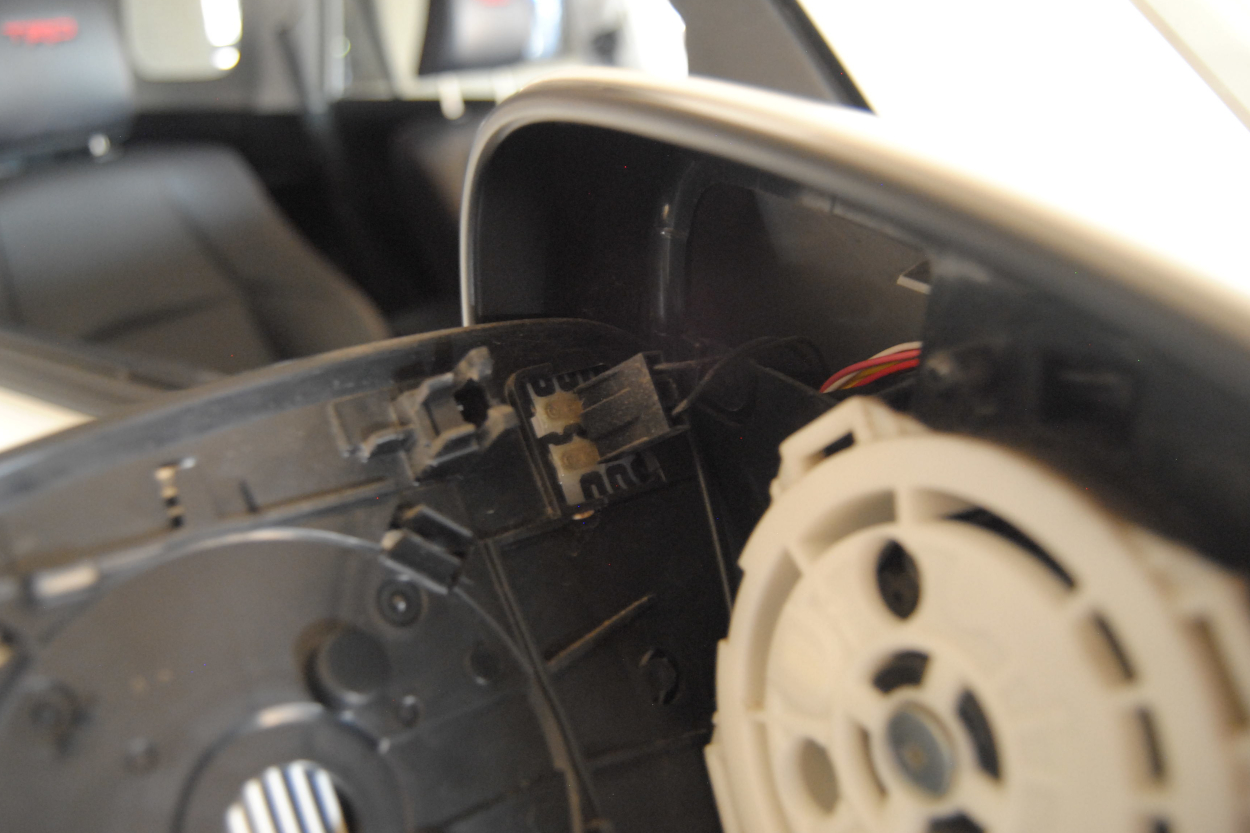 Be careful not to damage the wiring for your heated mirrors.

Store the mirror somewhere it won’t get scratched, like inside the 4Runner, while you keep working. 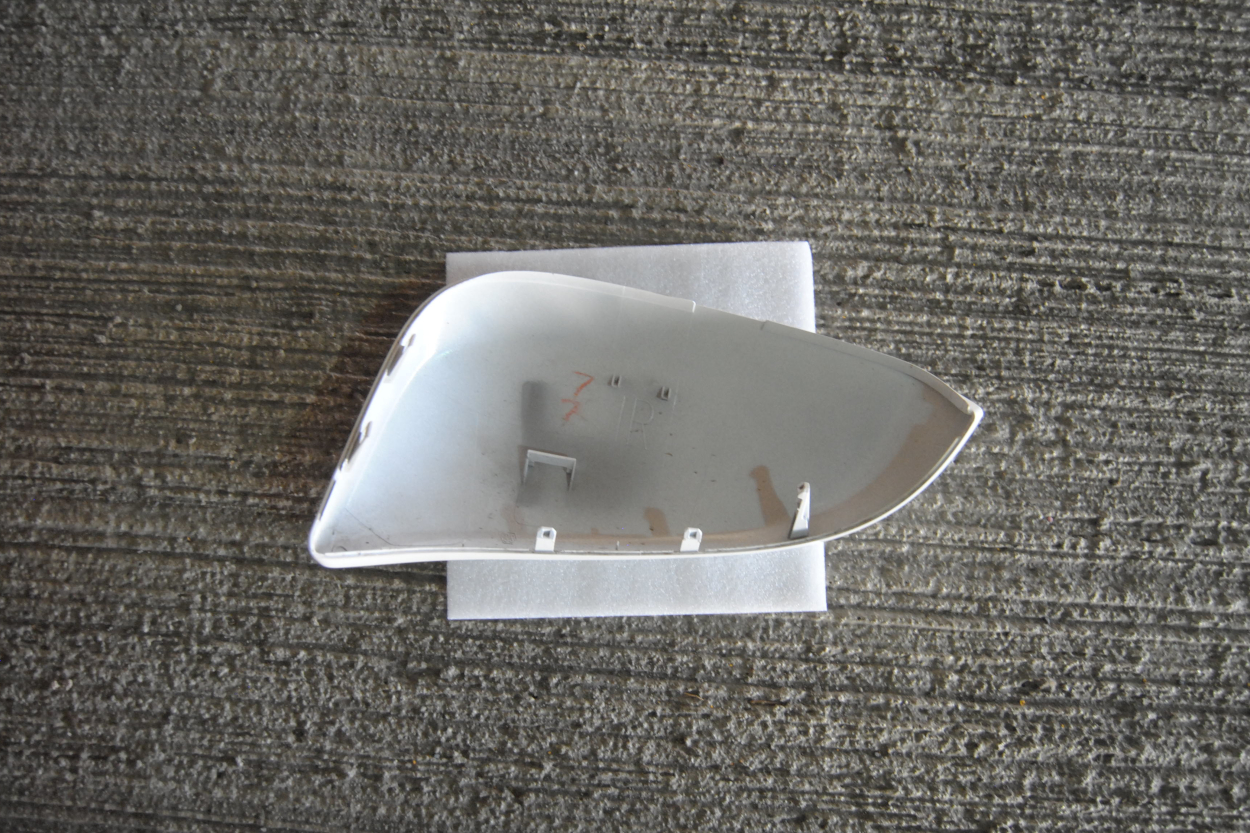 Once you have the mirror off, grab the included trim tool and look for the tabs holding the body-color panel onto the housing.

My Super White paint makes some of the tabs (to the right of the mirror mounting plate for example) easy to see, but even if you don’t have that high-contrast advantage, some patience and careful poking with the trim tool will inevitably lead you to the tabs.

The best practice is to start on one side of the mirror housing and work your way across, removing tabs as you go. 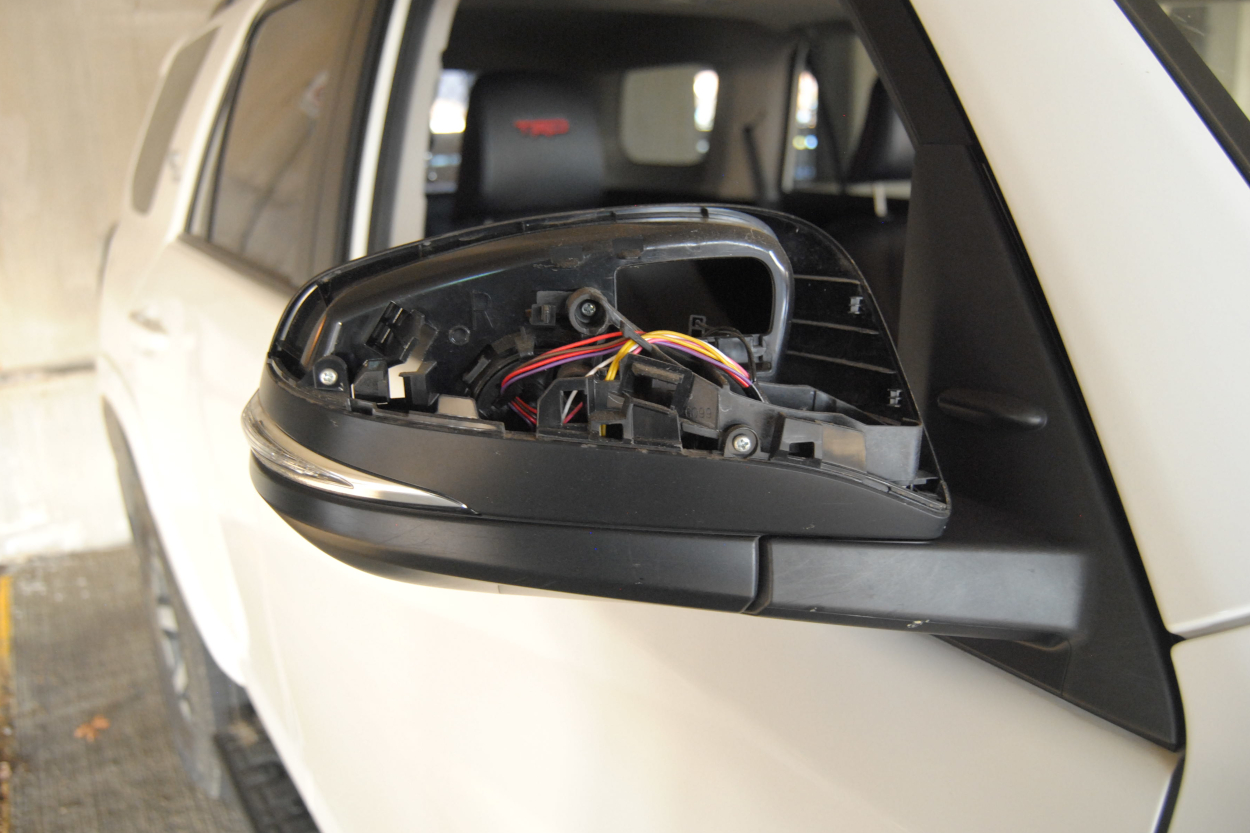 Now we’re getting into the real meat of installing this Mid-Atlantic Off-Roading Smoked Mirror Turn Signal.

With the body-color mirror cover removed, you should now be able to see two screws holding a black piece of plastic onto the mirror housing. Strictly speaking, these screws, and this panel, do not need to be removed in order to install the new mirror turn signals.

But personally, I found it much easier to do so, and since I was also upgrading my puddle lights to LEDs at the same time (an inexpensive and simple upgrade to do while you’re already working on your mirrors) it was well worth the effort.

With the cover(s) off, simply remove the stock mirror turn signal, taking care to disconnect the wiring harness.

Installing the new one is as simple as connecting the wiring harness and nestling it back into place. Note that the harness can fit either the left or right turn signal, so make sure you are installing it on the correct side of the vehicle. 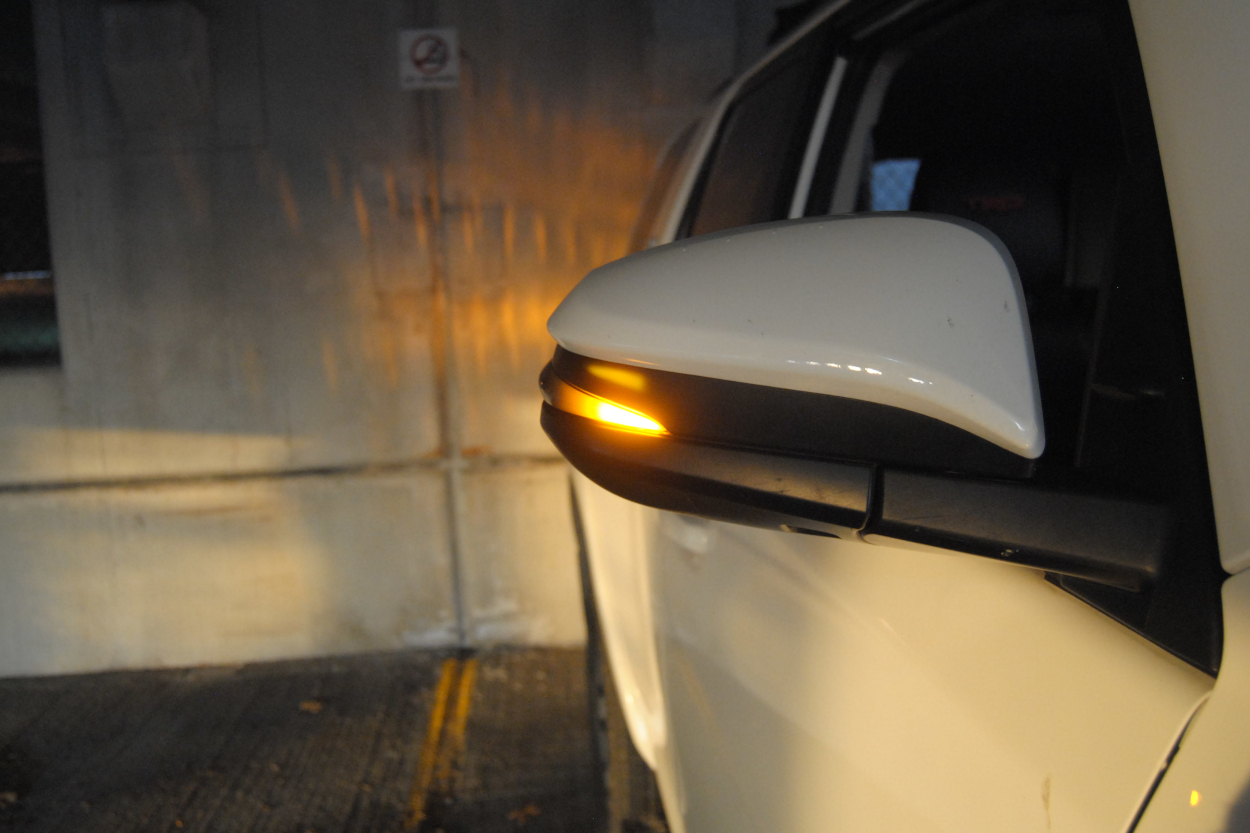 The sequential effect of the Mid-Atlantic Off-Roading Smoked Mirror Turn Signals not only looks cool, but it makes the whole vehicle more visible by introducing a motion to the lighting.

Put everything back in the reverse order of how you took it off. You’ll need to use a little force to pop some of the tabs back on for the mirror covers, so don’t be afraid of a few strong taps with the heel of your hand. And when re-installing the mirror, make sure you re-connect the heated mirror wiring first.

Step 6. Repeat On Other Side 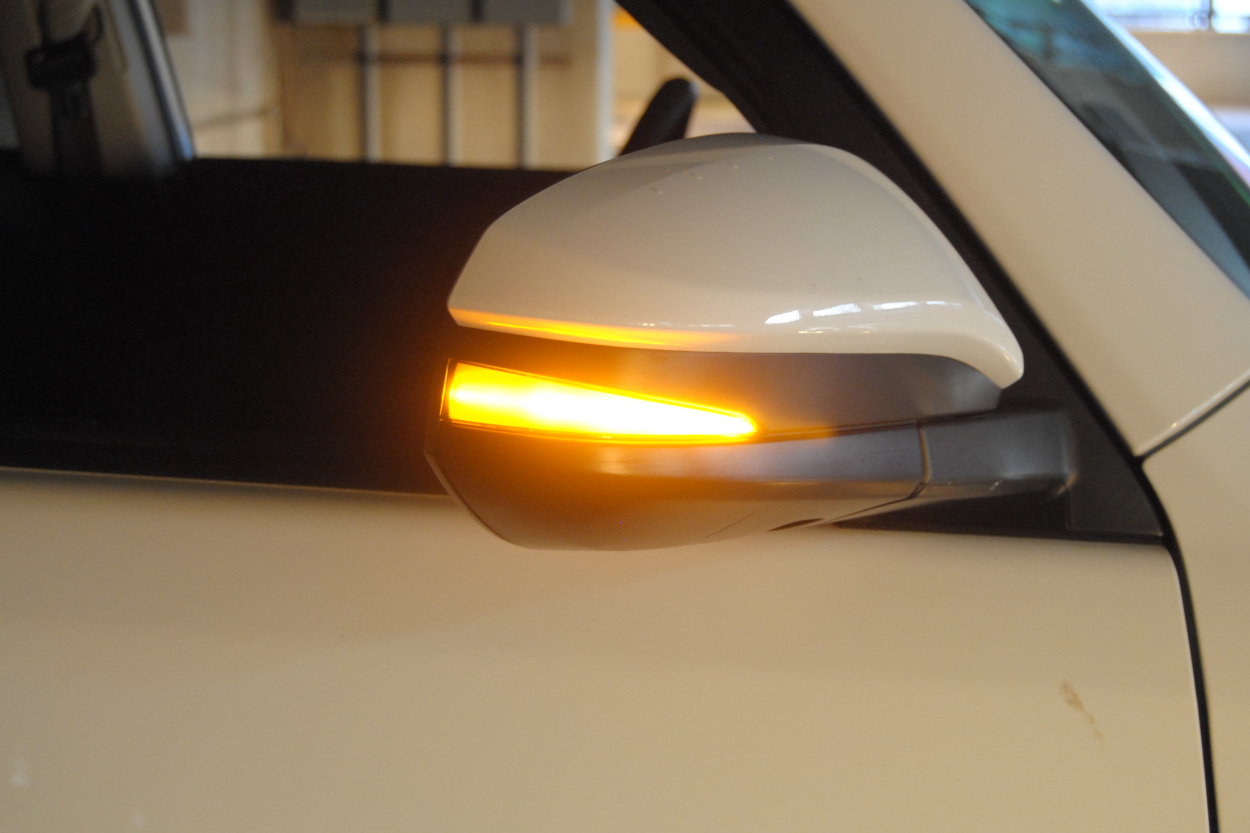 The same steps, in the same order, on the other side. 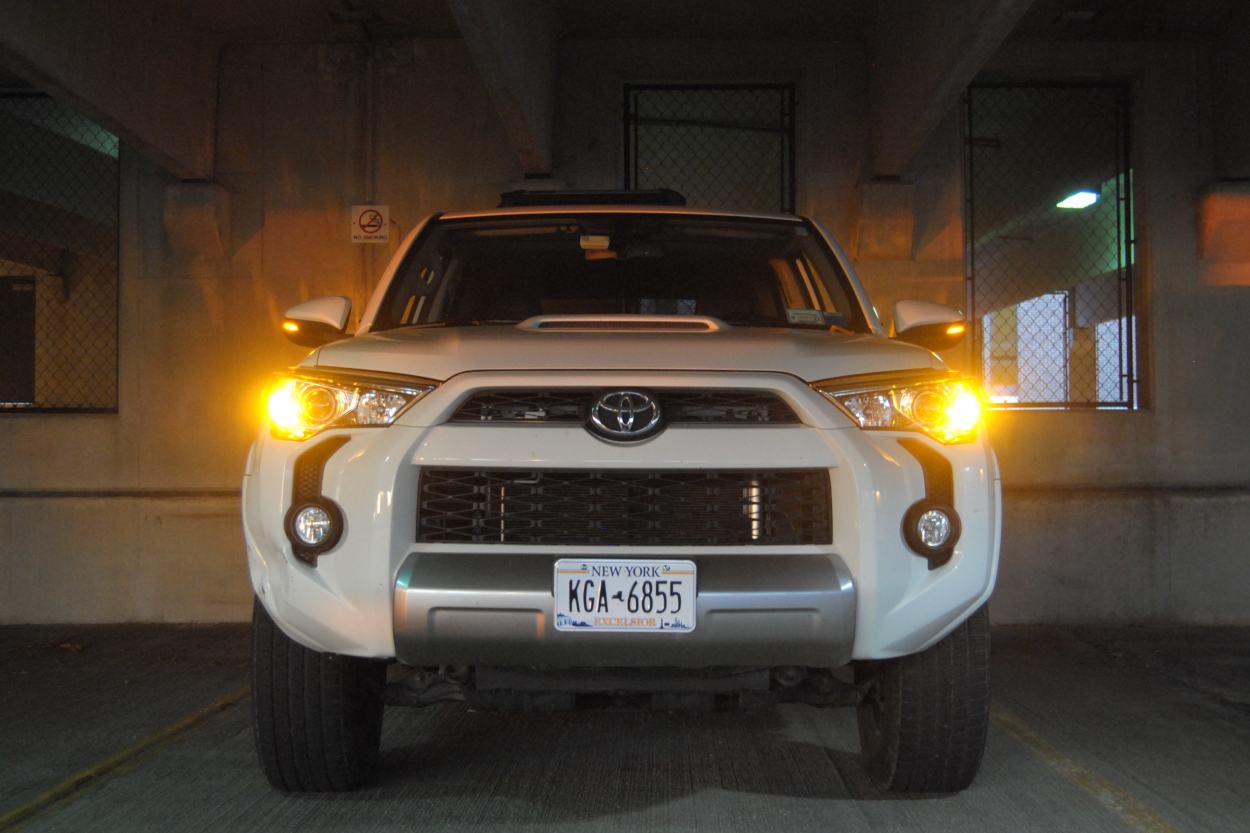 More than anything, installing the Mid-Atlantic Off-Roading Smoked Mirror Turn Signals was easy.

It took me just over an hour to replace both, including the time I spent stopping what I was doing to shoot the pictures in this article. And as discussed, half of the tools needed were included in the kit.

But those tools lead me to some interesting investigations. See, if you search on YouTube for “5th Gen 4Runner Mirror Turn Signal Installation” you’ll find a bunch of videos with people using what appears to be identical trim tools to install apparently identical mirror turn signals.

Except these videos make no reference to Mid-Atlantic Off-Roading, and in fact were often uploaded years before Mid-Atlantic Off-Roading came into existence in the middle of 2020. Muddying the waters further still is the fact that apparently-identical turn signals are available on eBay. For less money, shipped directly from Guangzhou, China.

So it appears that Mid-Atlantic Off-Roading is sourcing these already-existing turn signals from a factory in China (CarTrimHome.com – or take your pick from Alibaba), then selling them as their own. Which, really, isn’t a problem. Granted, you could save some scratch and buy straight from the source on eBay. But if you’ve ever ordered something from a semi-anonymous overseas seller, you know that can be a perilous decision.

If you’re lucky enough to receive what you ordered, you may receive it weeks or even months later than you would have expected from a “real” retailer. And if you have any questions, or worse, problems with the product, good luck finding someone willing to answer your questions.

Meanwhile, Mid-Atlantic Off-Roading shipped my Smoked Mirror Turn Signals a few days after I ordered them, and they were delivered a few days after that. When I emailed them with a question, I got a response within twenty-four hours. So yes, I could have got them cheaper on eBay, but I got them much faster and with much better service by buying them from Mid-Atlantic Off-Roading. Plus, not to mention, the added benefit of supporting other people who are passionate about off-roading. 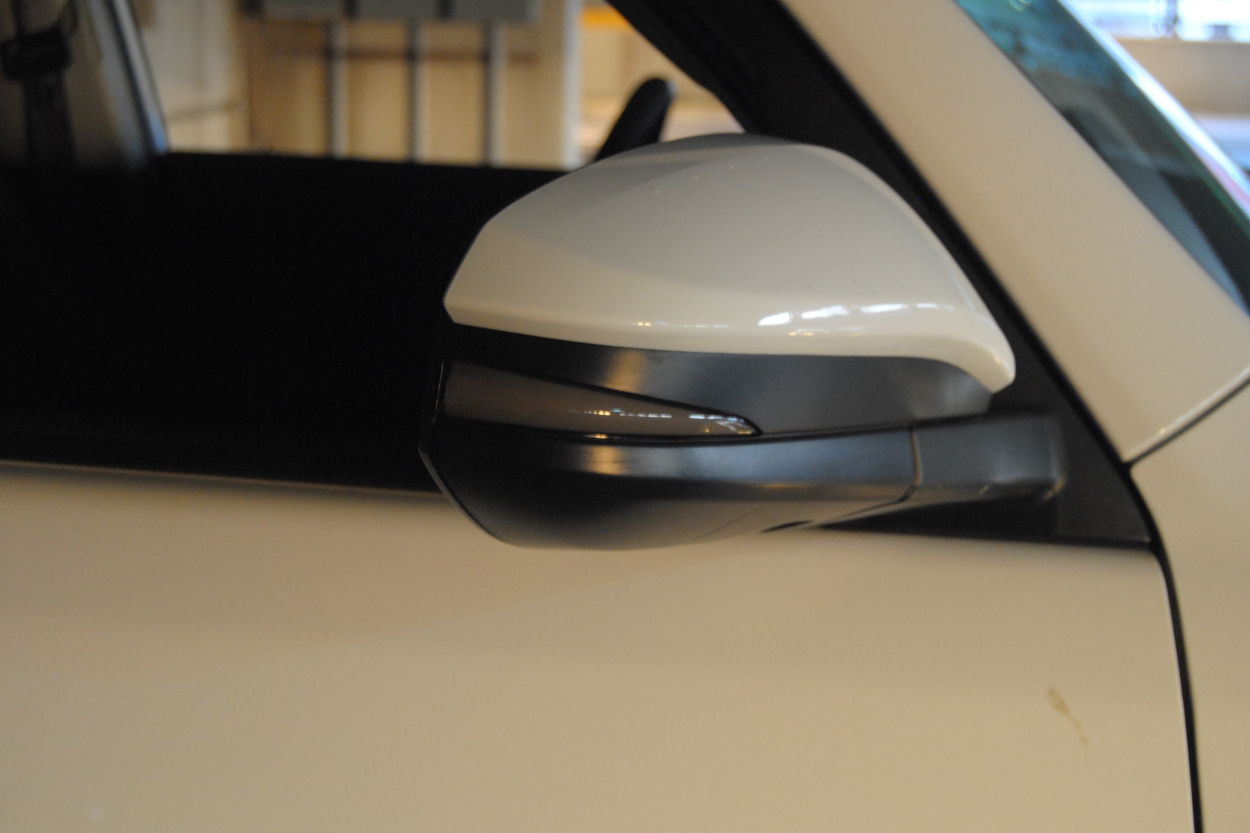 But more important than any questions about sourcing and retail reality, how do the Mid-Atlantic Off-Roading Smoked Mirror Turn Signals work? Simply put, they’re an obvious upgrade over my stock ones.

The light is larger, brighter, and thanks to the sequential illumination, more visually noticeable than stock, which in turn makes my 4Runner more noticeable … when I remember to use my turn signals.

Jim - @thejimoleary
Unapologetically East Coast, I live in the part of New York that is only technically not New England, where I spend my time snowboarding, cycling, climbing and camping just like every other 4Runner owner. When I'm not busy being a stereotype, I play bass, read books about tall ships and work as a freelance writer.
Recent Posts
Subscribe
8 Comments
Inline Feedbacks
View all comments

These comments all read as if paid off to say such stuff. For a relatively obscure aftermarket mod, this post has generated more comments (which all say similar things) in such a short time span than stuff that is far more popular as a 4R or vehicle mod (bumpers, lifts, tires, etc etc). On to my actual question. You said the lights are brighter and perform better. Do you have any pics or videos (video would be especially awesome!) that you can show us the difference? There probably is a difference, but it’d be nice to see how much of… Read more »

Yeah… truth be told all these sketchy comments are making me reconsider the wisdom of giving the brand any attention. But you ask a very good question, one that I honestly should have thought of while installing the lights. I’ll see what I can do with someone else’s vehicle, though that may take me a bit. For what it’s worth though, they are a LOT more visible. Both because the lights are simply brighter (which is hard to depict without the side-by-side comparison I’ll try and get for you) but also because so much more of the piece illuminates. As… Read more »

I have these on my 20 TRD Rav4, let me tell you they are AMAZING! They were super easy to install. I’m constantly getting compliments on them. Shipping was fast and they have the best customer service of any business I’ve dealt with. I have other products from them as well and they don’t disappoint. I, 100% recommend Mid-Atlantic Off-Roading!

I’ve got these on my RAV4, they got to me very quickly and I must say the quality of these isn’t even comparable to stock or some others I was browsing when looking for what to purchase. I’m glad I came across this company, best customer service and they answered all my questions quickly and professionally. Luckily the RAV4 is much easier to install these on, took me only about 5 minutes per side. Everyone compliments them, and the best part you can actually see the light in the daytime and at night, the stock lights in the RAV4 aren’t… Read more »

Good Afternoon, Thanks for going over the steps on how to change the directional lights out on the 4Runner. I purchased this kit for my Tacoma, I received the kit with all the tools needed (including the screwdriver) within a week and found the installation to go fairly easily as it seems you did also. I to found them to be incredibly brighter and give my Tacoma (Tan in color) a much better look without the chrome. I also preformed a in motion test with another person driving my tacoma and we tested the noticing range of the turn signals.… Read more »

We thank you for your purchase of our product! As always, we appreciate our customers supporting a small business owned here in America.   We just wanted to call out some details of this review that we would like to provide our thoughts on. Our mission has always been and will always be to provide affordable off-roading parts to our customers from a company based here in the USA. There are only so many aftermarket off-roading parts to offer, so there will be overlap with other companies. This review did only look at companies outside the USA when making its… Read more » 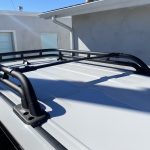 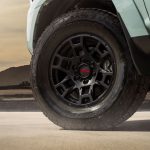