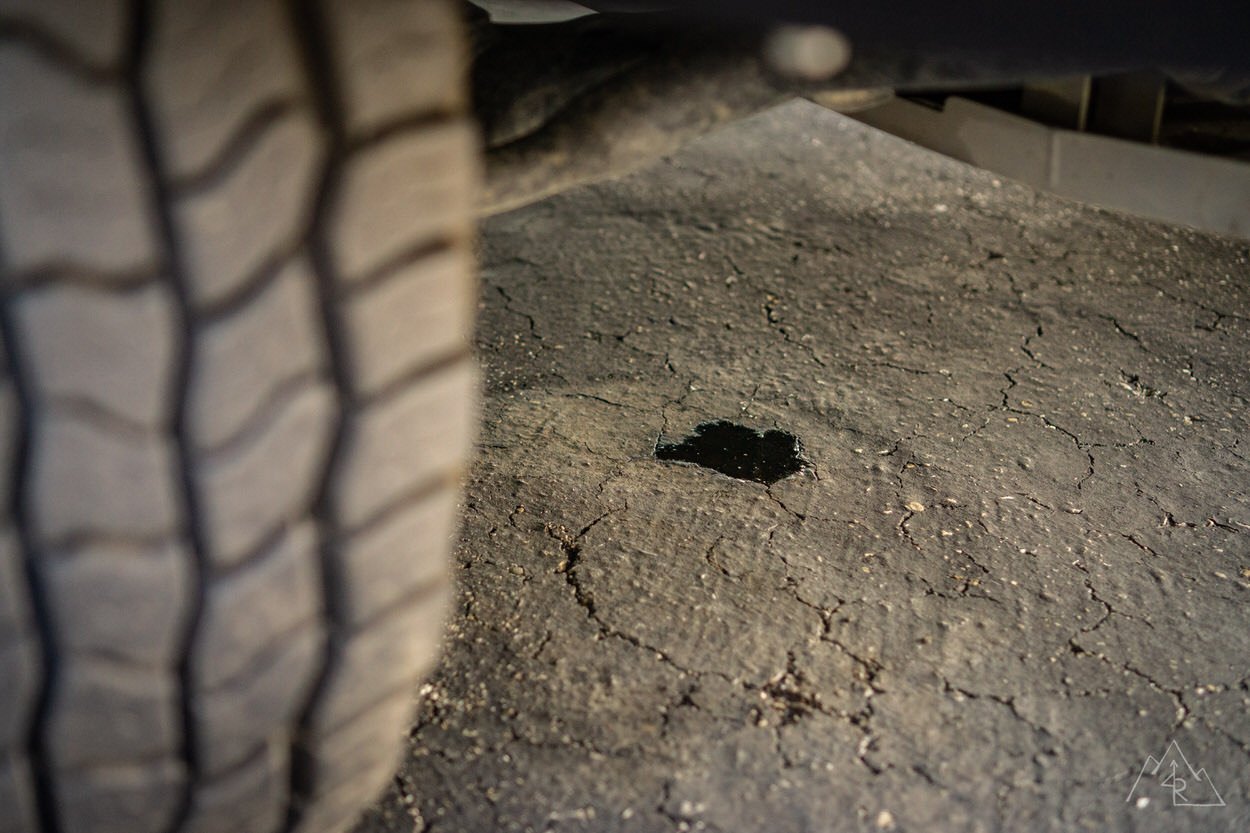 You walk outside, towards your 4Runner, only to be disappointed when you spot a puddle underneath it that wasn’t there the night before.

On further inspection, you see that fluid is coming from where your CV axle meets the axle housing. Congratulations, you have a leaking axle seal. Don’t worry, the fix is simpler than you think and can be done in your own driveway if you’re mechanically inclined.

We will walk through the steps to get the oil pan out from below and your 4Runner back on the road.

This guide will double as a reference point for how to replace a CV Axle on your 4Runner. Our overview is for replacing the seal but the process of replacing or swapping out a CV Axle is the exact same. 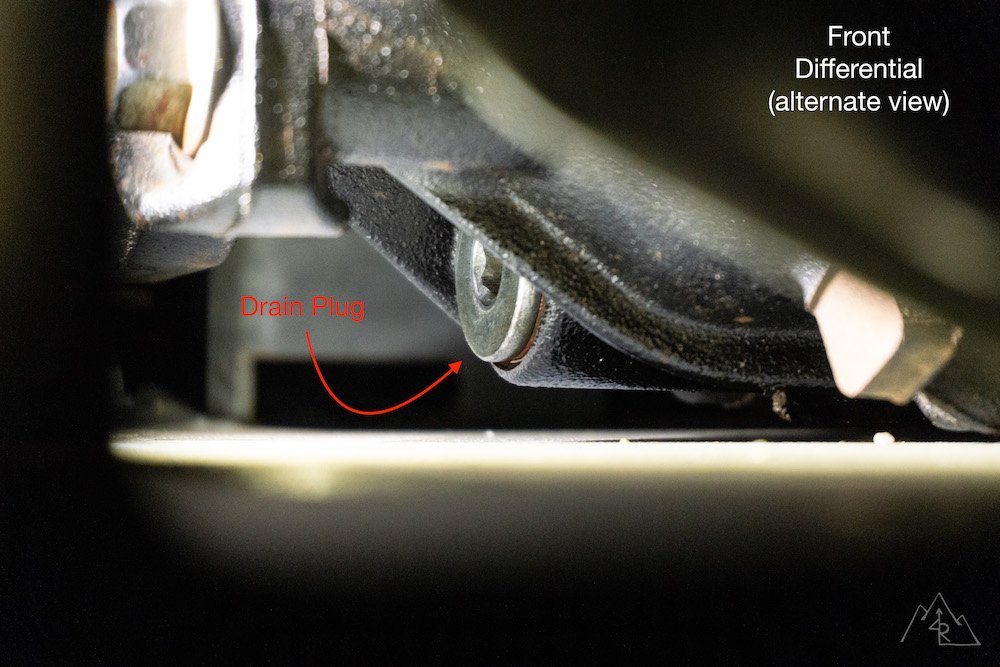 Drain the gear oil from the front differential. You can use this article as a guide for draining and refilling your differential. If you have a skid plate, you’ll need to remove it before draining the differential fluid. 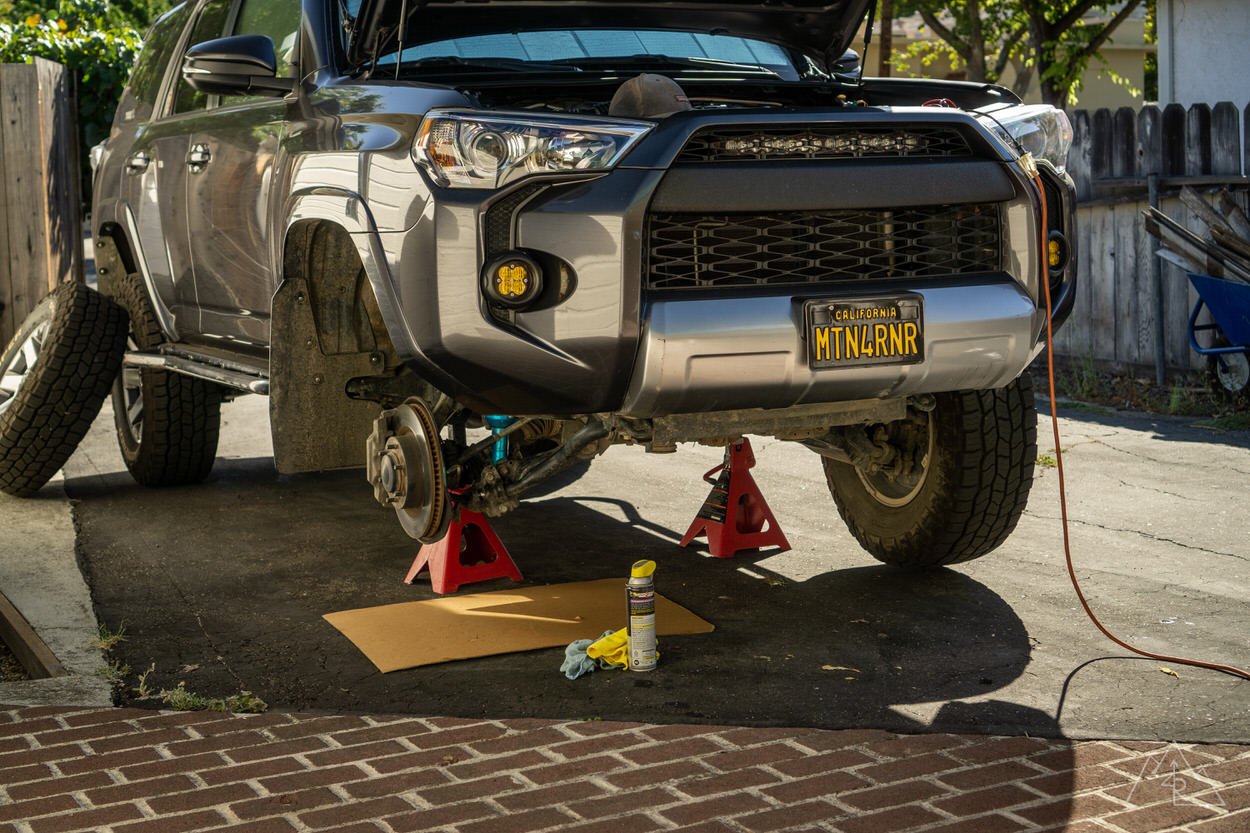 Get the front end of your 4Runner in the air with appropriate jack stands and prep the working area by removing debris from under the side you’ll be working on. Then remove the wheel/tire on the side with the leak. 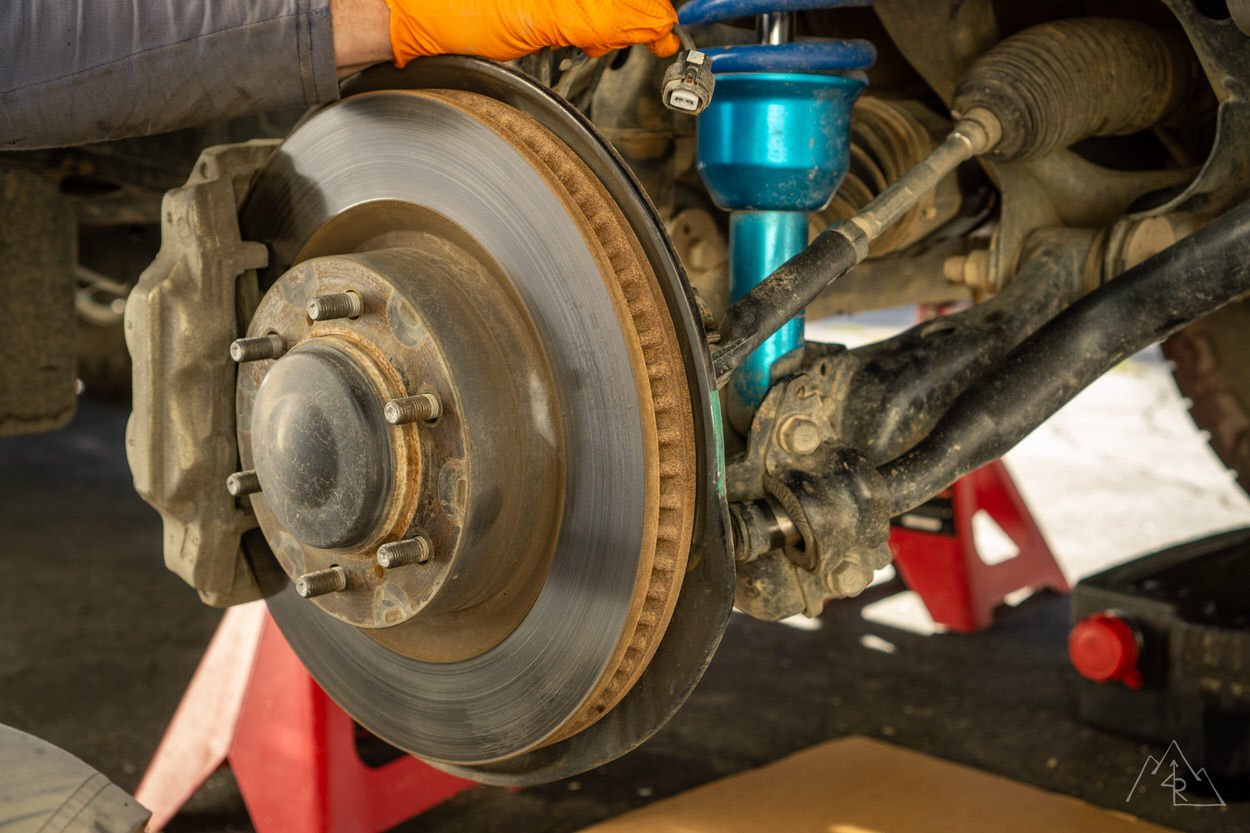 Unplug it from the speed sensor on the spindle, unbolt the bracket attached to the spindle using a 10mm socket and secure it above where it can’t be pulled. 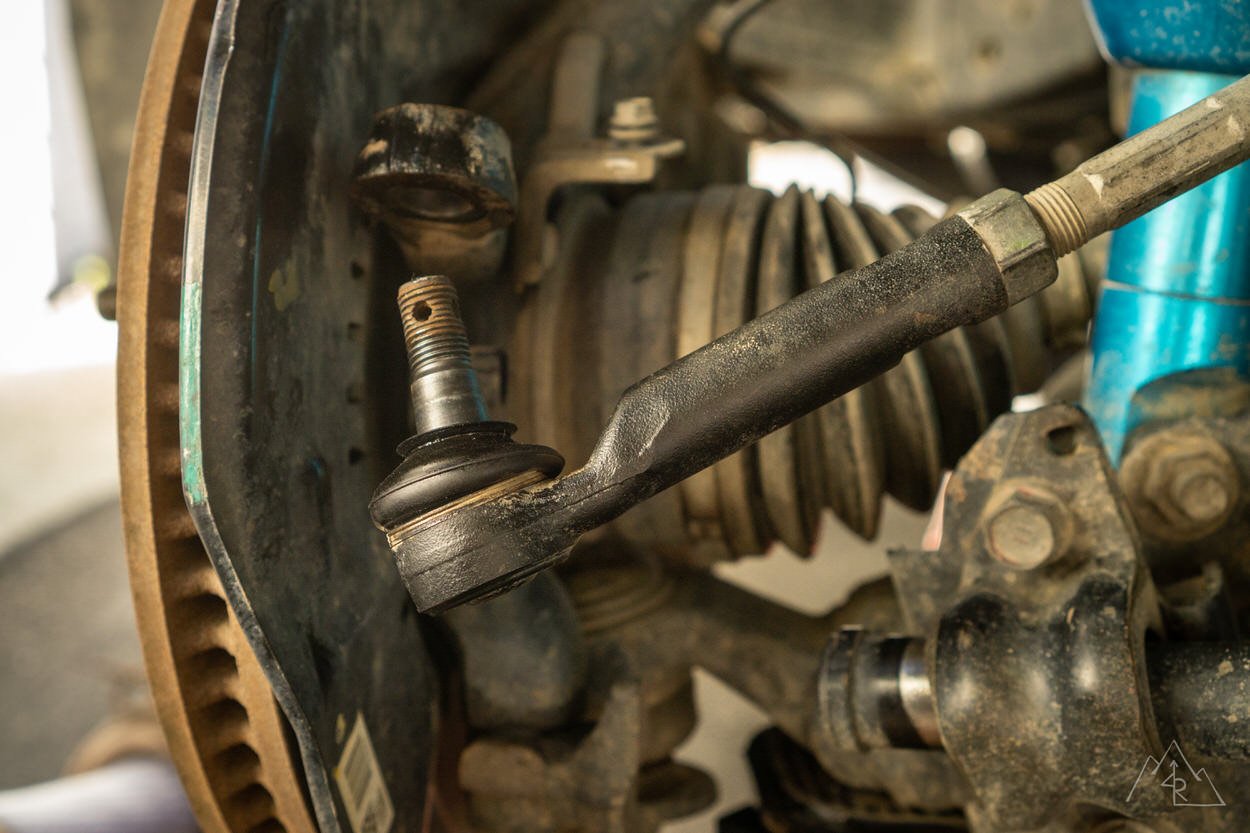 Remove the cotter pin on the tie rod castle nut. Throw this pin away and replace it when reassembling.

Then remove the 19mm castle nut on the tie rod. Use penetrating fluid as needed. Then using the ball joint separator, taking care to not pinch or rip the rubber boot, separate the ball joint from the spindle.

Make sure the tool remains square to the rod end to avoid any slipping under tension which could damage the threads. 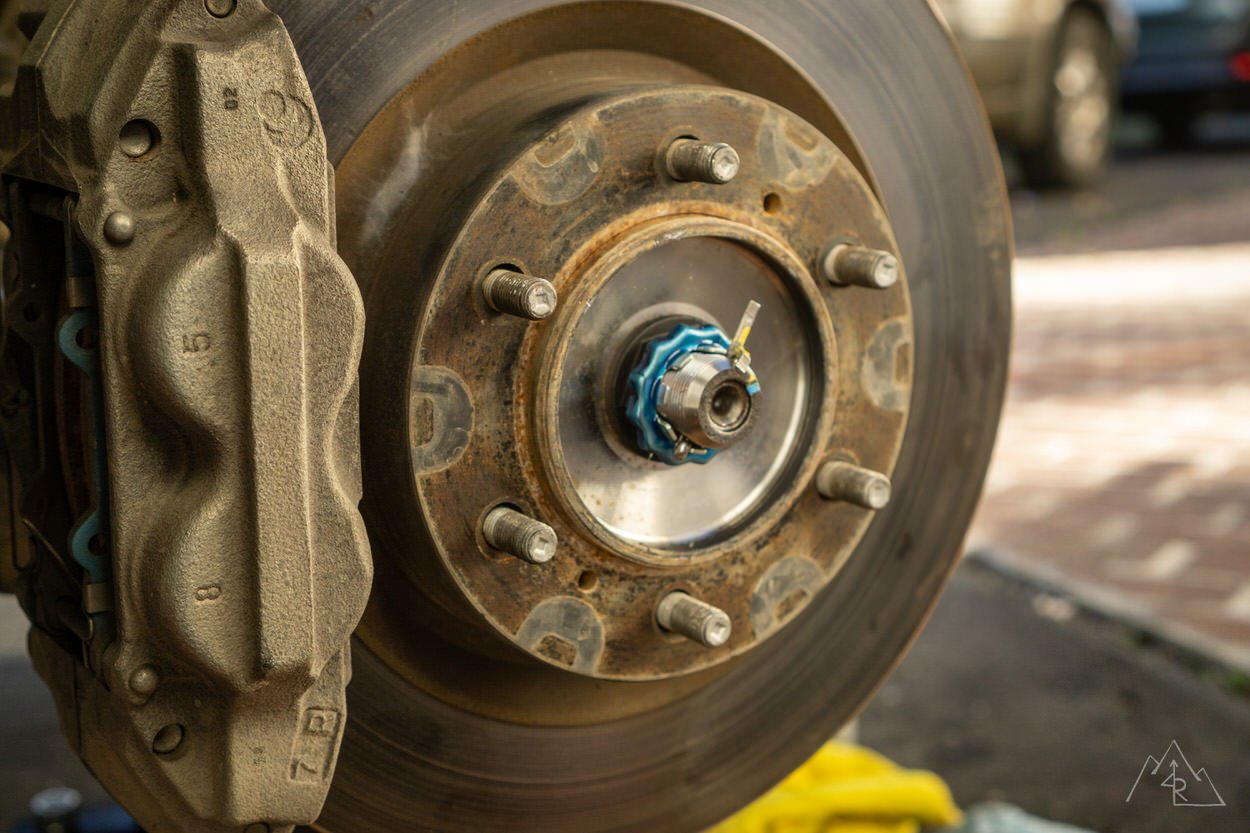 Remove the axle nut dust cap with a flat head screwdriver and a dead blow hammer. The pointier the end the better for the screwdriver as you wedge it between the cap and the hub assembly.

Work your way around the cap until it pops off. You may damage the cap in removing it, which is why I recommend having a spare on-hand. With the cap removed, take out the cotter pin on the retention cap. 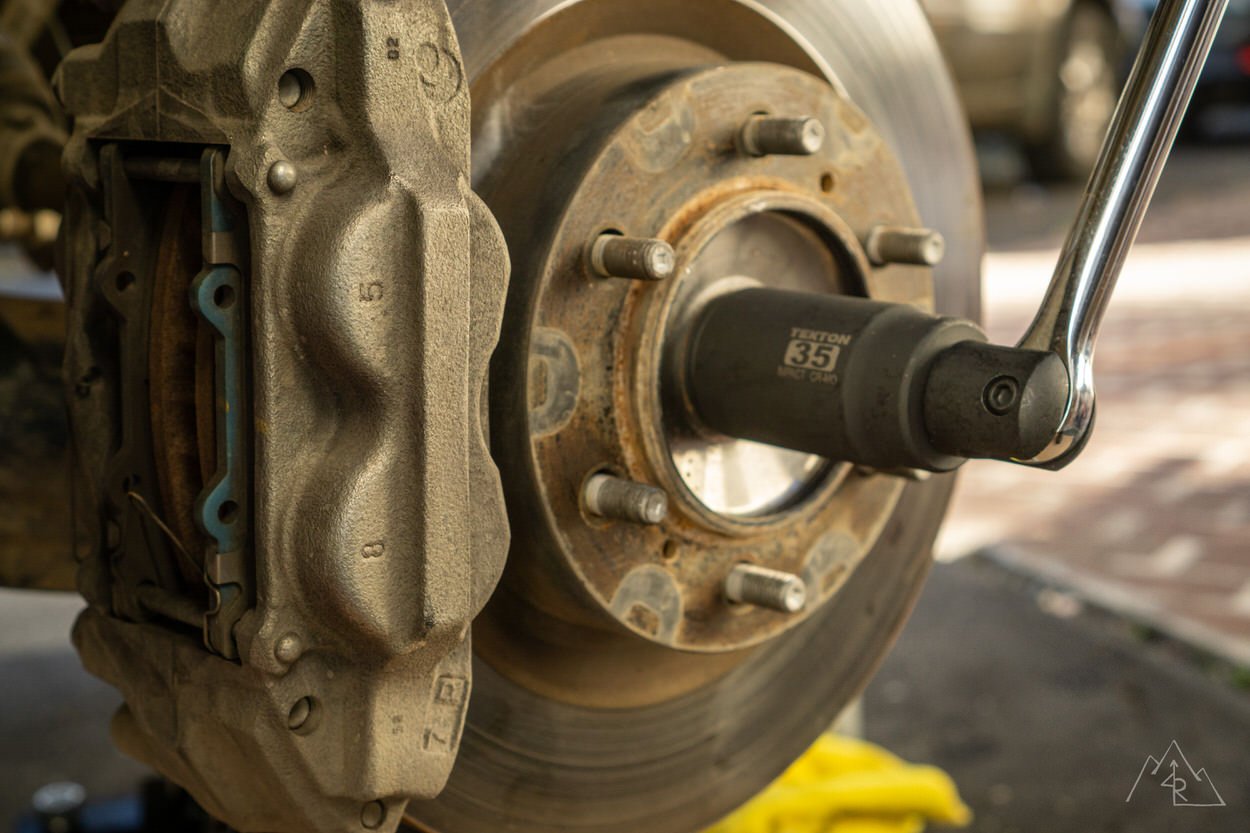 Remove the retention cap, then take your 35mm socket and breaker bar to spin the axle nut off. 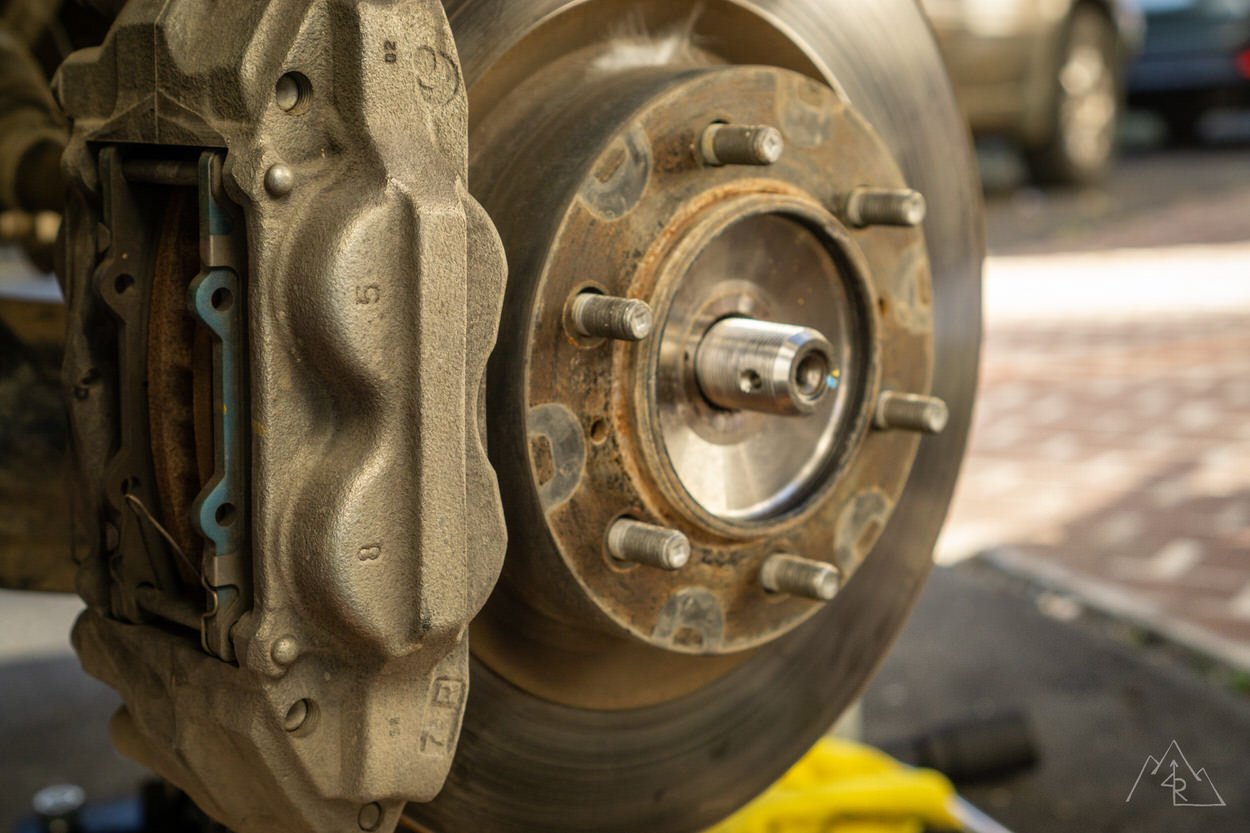 Make sure your 4wd is engaged and parking brake on to keep the axle from spinning. Remove the nut and set it aside. 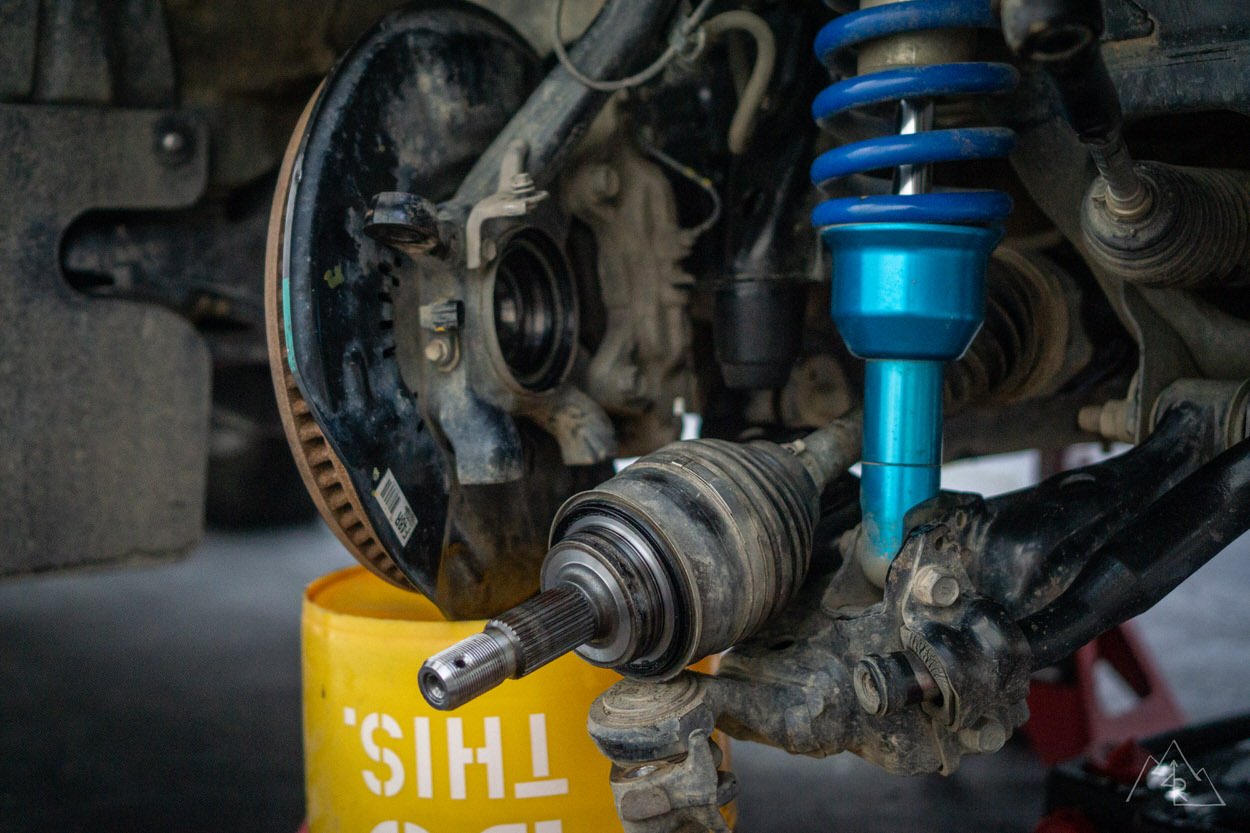 Take the axle nut and thread it on backward until the axle is almost flush with the nut. This will allow you to hit the nut with the dead blow and not damage the axle threads themselves.

While holding the spindle away from the lower control arm, hit the end of the axle until it breaks free from the hub. If the axle doesn’t move, you can use a block of wood against the nut and a larger sledgehammer to break it free. If it remains stuck, spray penetrating fluid on the splines and wait the designated amount of time to try again.

Once the axle is free from the hub, pull the spindle to one side and secure it using a strap or bungee. 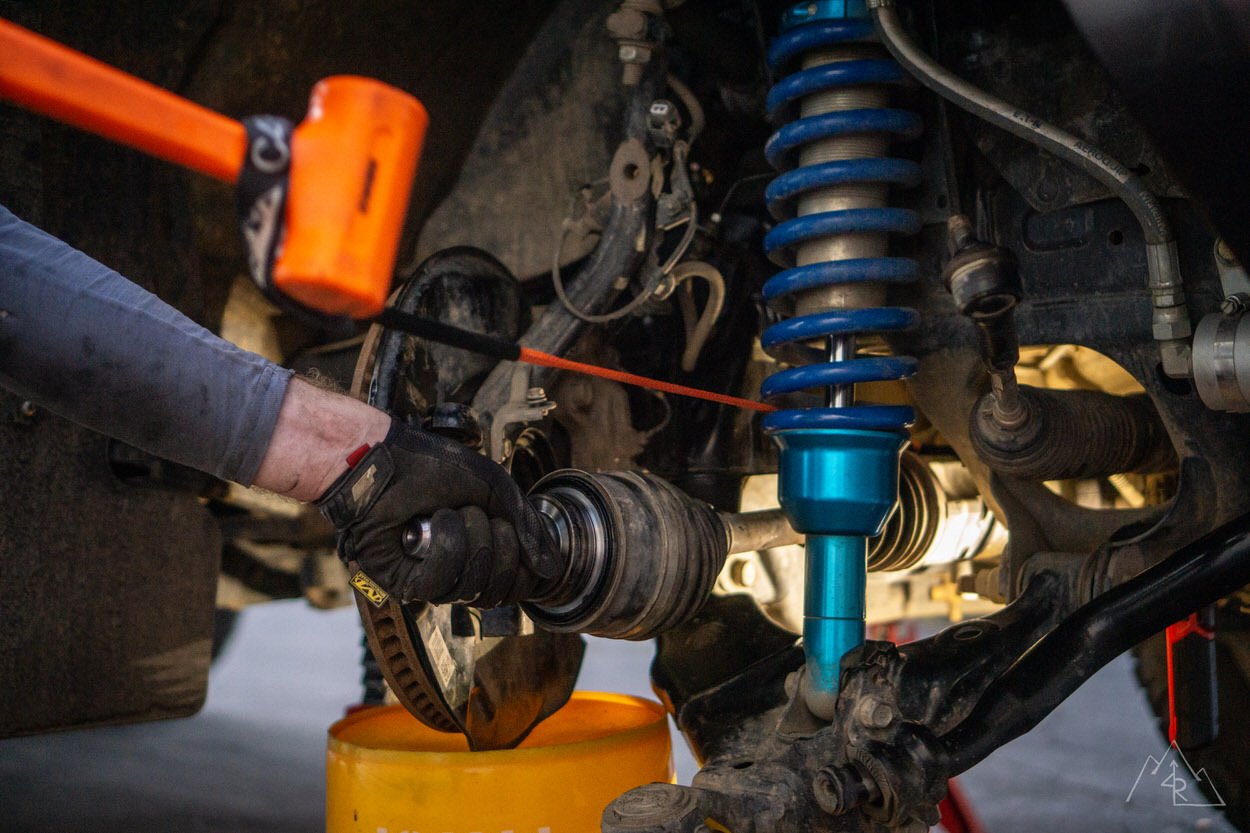 Using the C4RS CV tool and following the provided instructions, remove the CV axle from the front differential.

There is an internal clip holding in the CV axle. If the axle is difficult to remove, rotate the axle 90º and try again, leaving the puller knot in the same location each rotation.

The dust shield on the CV can be damaged in this process, which is why it’s good to have a spare handy. 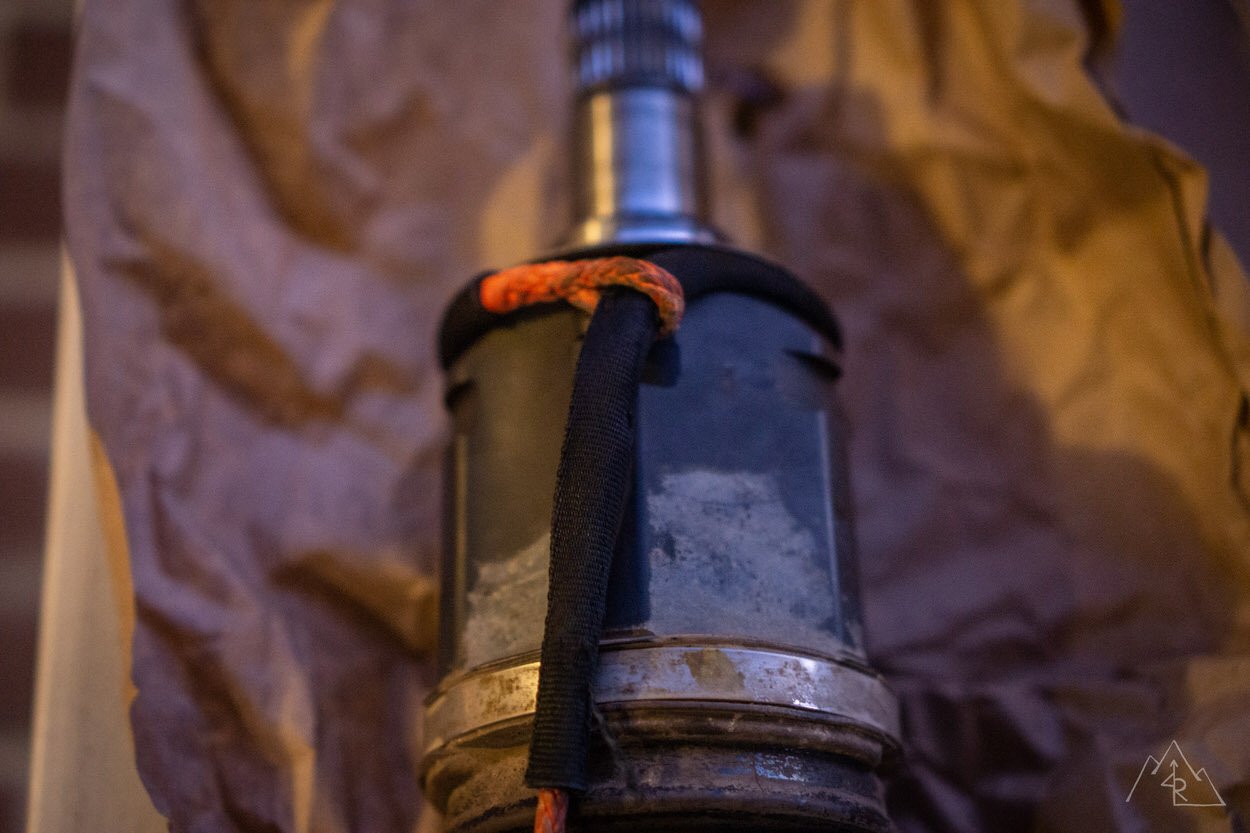 If at any point after removing the CV axle you need to stop and take a break from working, use a latex shop glove to cover the open axle end to prevent any contaminants from getting into the differential. 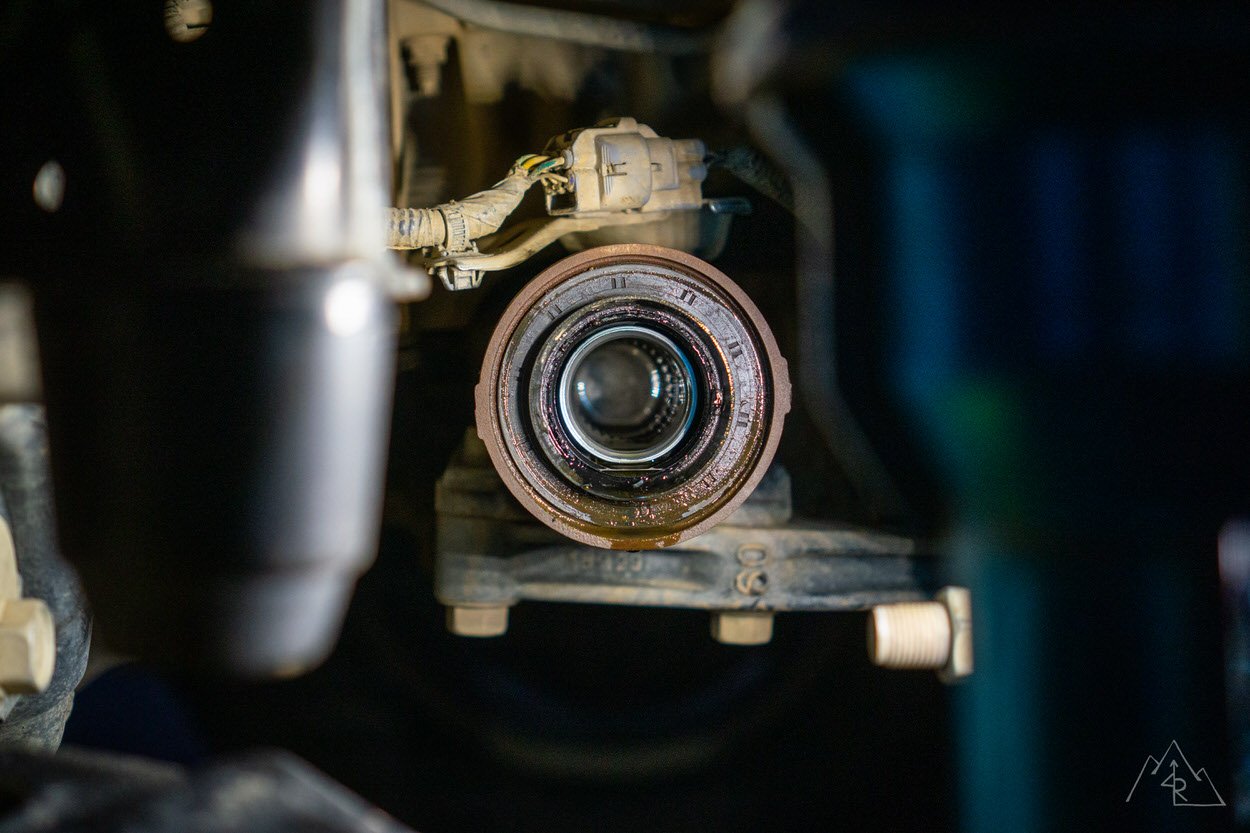 Before removing the existing seal, you’ll want to measure the depth that it was installed and take a photo for reference. You’ll want to match this depth when installing the new seal. 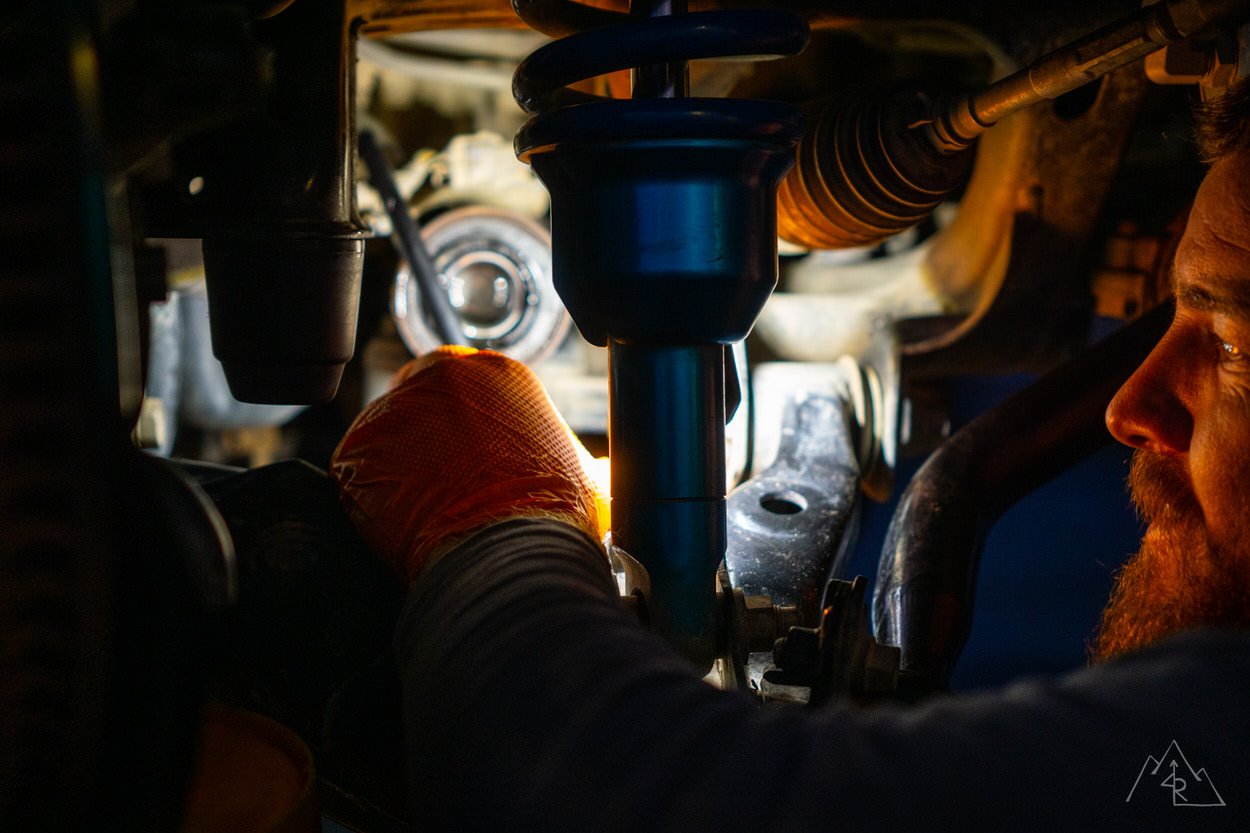 Using the seal remover tool, remove the old axle seal. You’ll want to have some cardboard or a small oil pan under the axle when you remove the seal as there is a chance some remaining gear oil will run out. 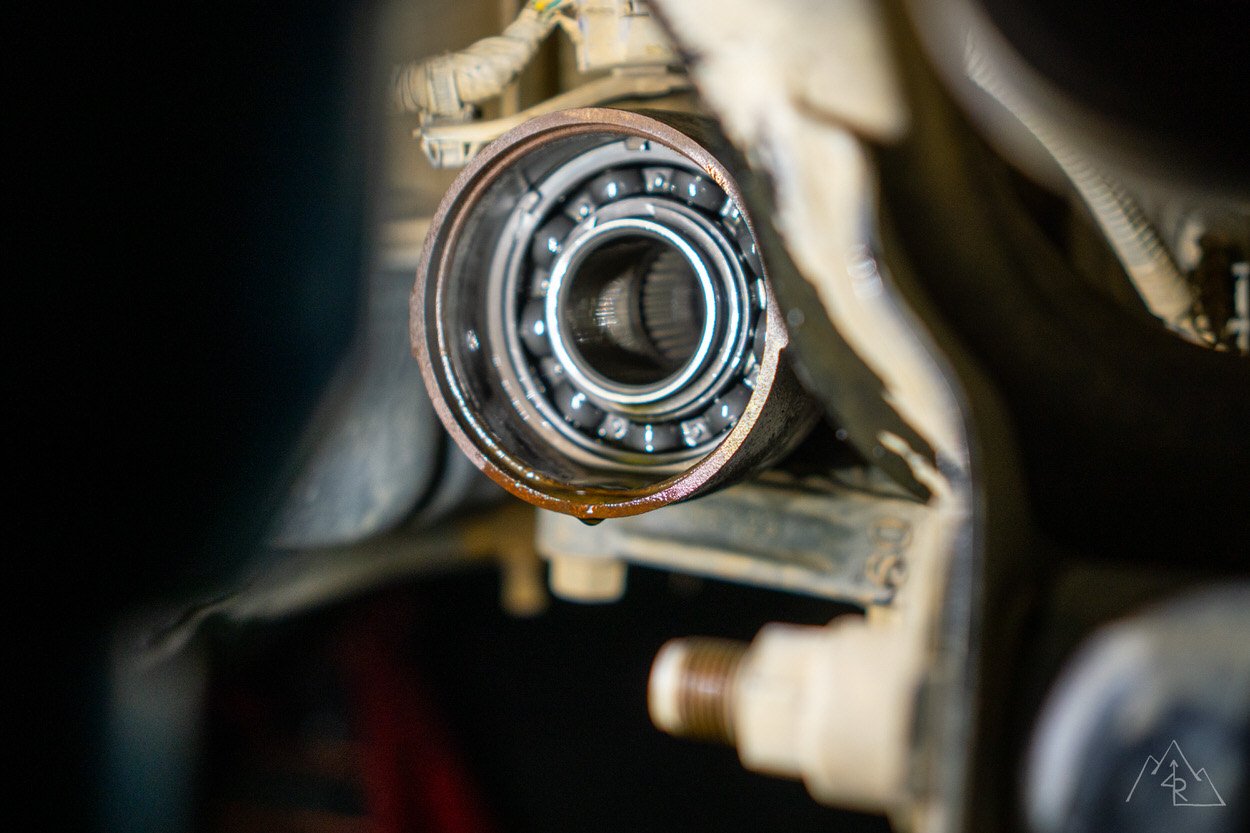 With a shop towel, wipe away any remaining gear oil or debris from the axle housing. Inspect the housing for any damage that might have occurred when removing the seal.

If you did damage the housing, you’ll need to evaluate and fix it before installing a new seal.

Take some fresh gear oil and coat the seal and the inside of the axle housing. This will reduce friction and allow for an easier install.

Square the new seal in the housing. Set the 2” PVC coupler against the seal and with the dead blow, begin to tap the seal into place. I found that using the end of the hammer thrusting in towards the center of the vehicle was the most effective way to keep the seal square with the housing as it is hammered into place.

Refer to the photo you took of the old seal to determine how far in to seat the new seal. Once the seal reaches the appropriate depth in the housing, wipe any excess oil away. 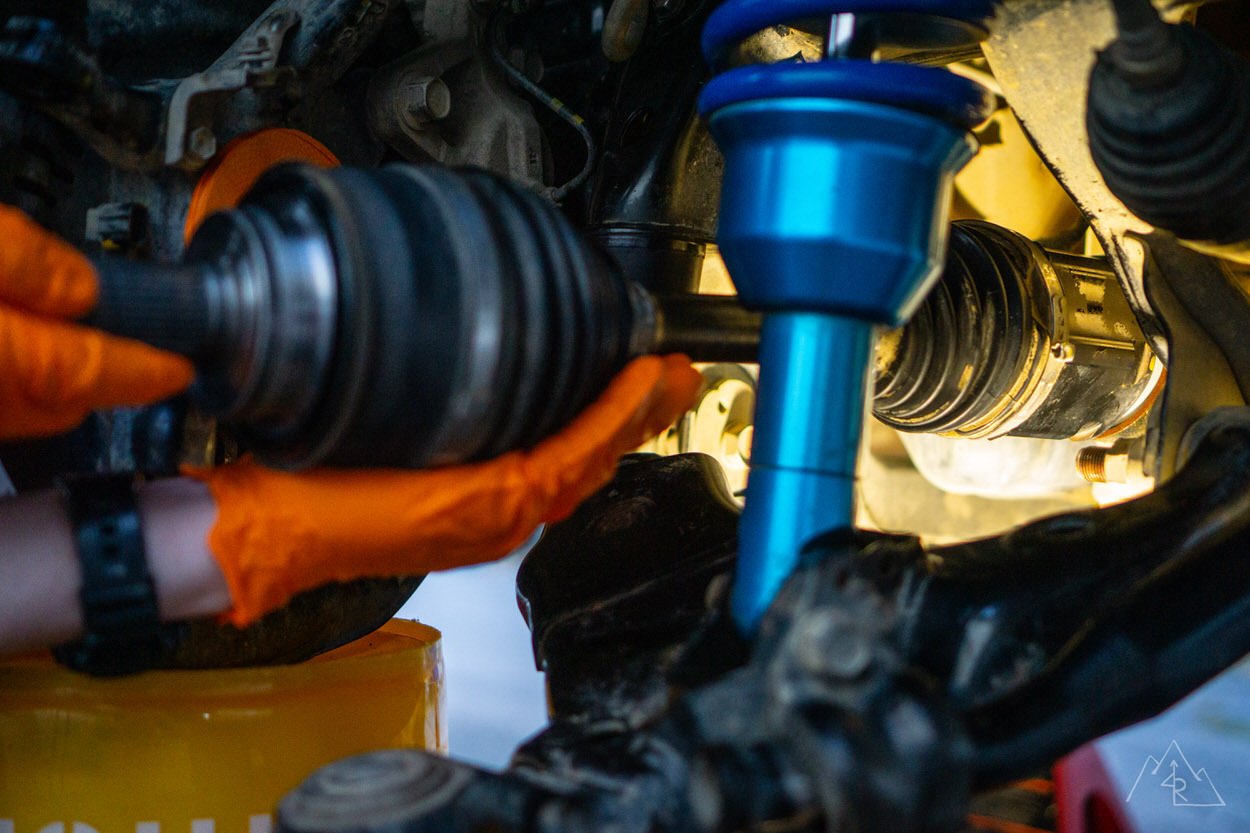 Clean your removed CV axle on both the shaft ends and the boots.

CV boots clean of debris last longer and they’re much simpler to clean off the vehicle, so do it while it’s easy. Orient the axle with the correct end towards the axle housing, and the open side of the clip facing down. If the clip rotates, the axle won’t slide into the housing.

Take care to not damage your new axle seal when sliding the CV into the housing. With everything lined up, a good shove should allow the CV to pop into place. If the CV doesn’t want to pop in, pull it back and check the clip orientation.

As a last resort, you can strike the end of the CV shaft with the dead blow towards the axle housing holding the CV perfectly in-line with the axle. 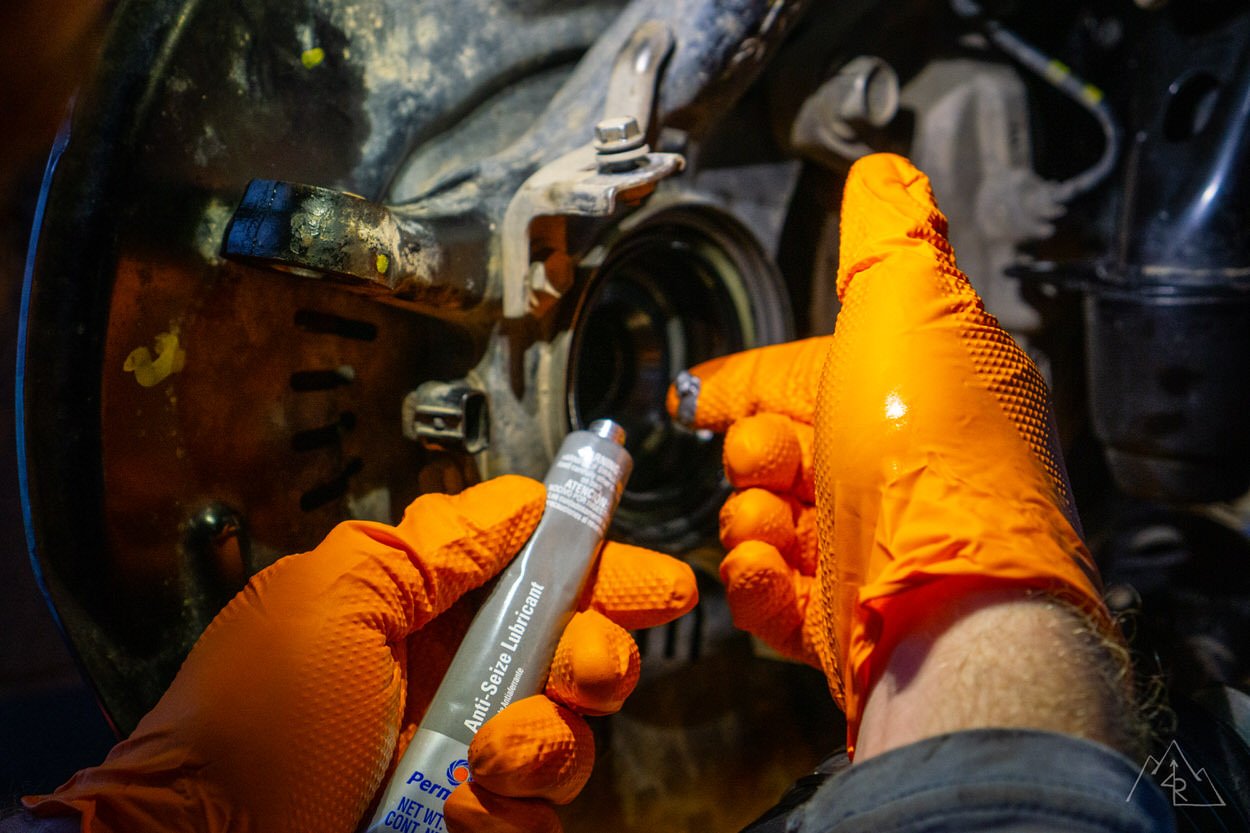 Make sure both the CV splines and the hub splines are free of surface rust or debris.

Any surface rust should be removed with a small wire brush and sprayed with brake cleaner to remove all debris or penetrating fluid from the removal process. Add a light layer of anti-seize onto the hub splines to keep rust from forming for the next time you need to disassemble the front end.

Make sure any of the other dust and debris boots are clean. Align the hub and axle and slide through until the boot on the outside of the axle contacts the inside of the hub. Don’t install the axle nut yet. 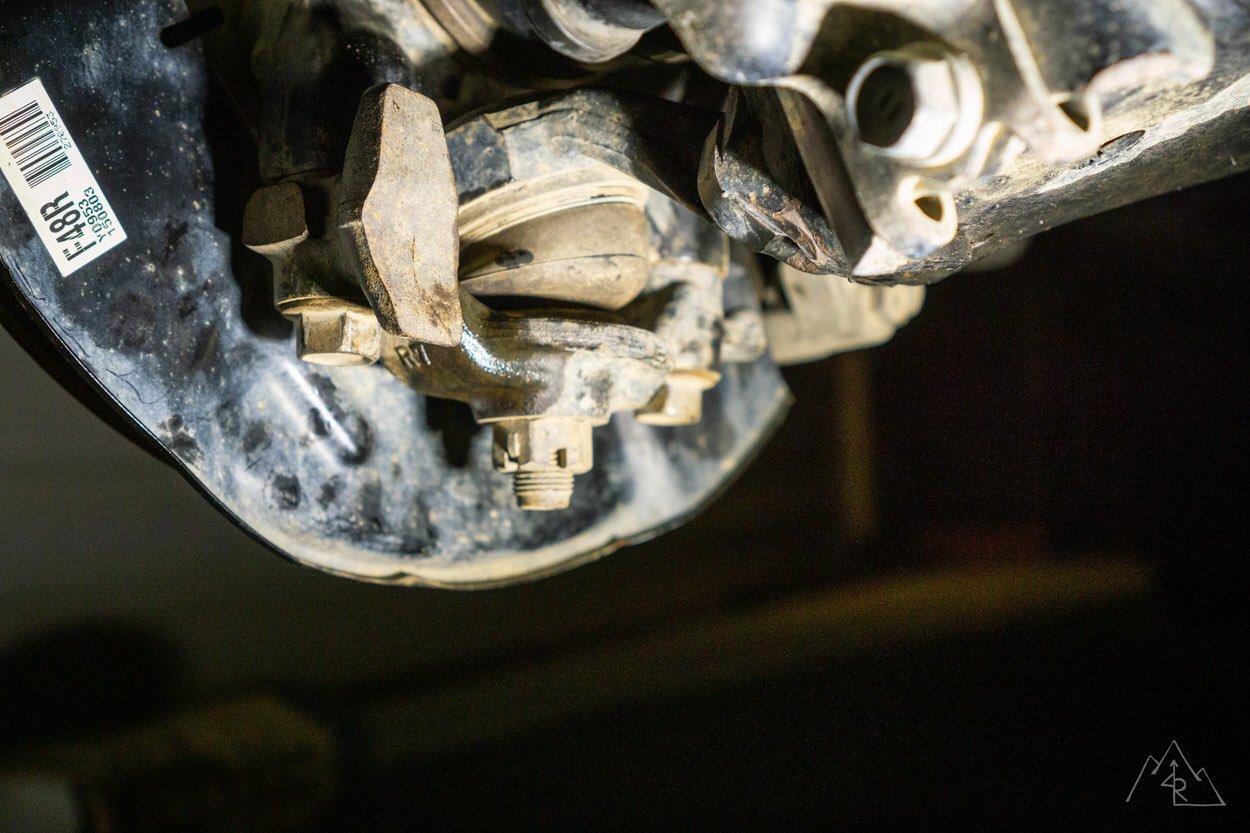 Using the two 19mm bolts, align the spindle to the lower control arm and install the bolts. Torque them evenly to 118 foot-pounds. Mark the bolts with witness marks as a reference. 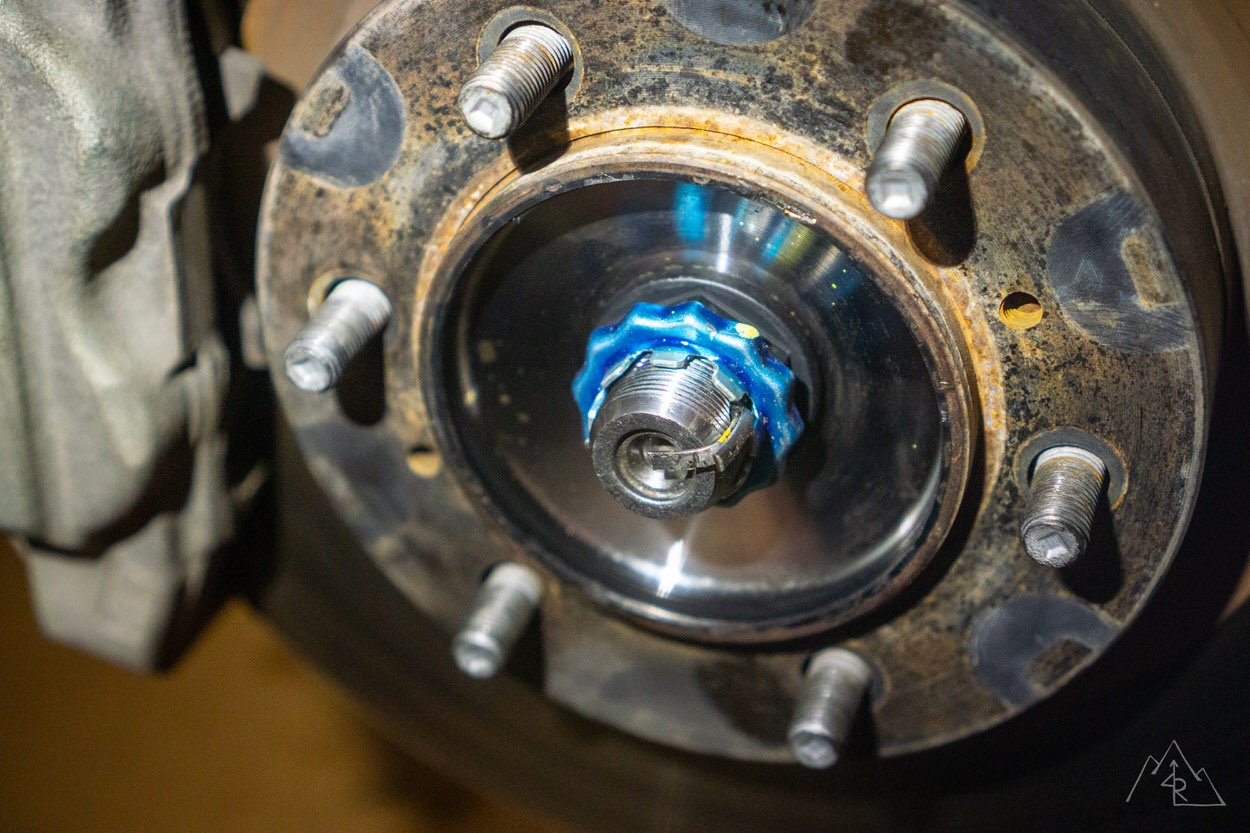 Inspect the existing axle nut to make sure it’s true and free from deformation that might have occurred during the removal process or when removing the axle from the hub. If damaged, replace it with a new part. Thread the axle nut onto the axle and torque to 174 foot-pounds using the 35mm socket. Have someone sit inside the vehicle with their foot on the brake to keep the hub assembly from rotating while setting to spec.

When the hub is torqued, reinstall the retention cap and new cotter pin. Take the hub cab and square it up to the hub. With a centered a firm hit, strike the cap with a dead blow until the cap is fully seated.

Reinstall the tie rod into the spindle taking care to not damage the dust boot. Inspect the boot for any previous damage that might have been caused in the removal process. Replace if needed. Torque the castle nut with a 19mm socket to 67 foot-pounds and install a new cotter pin. 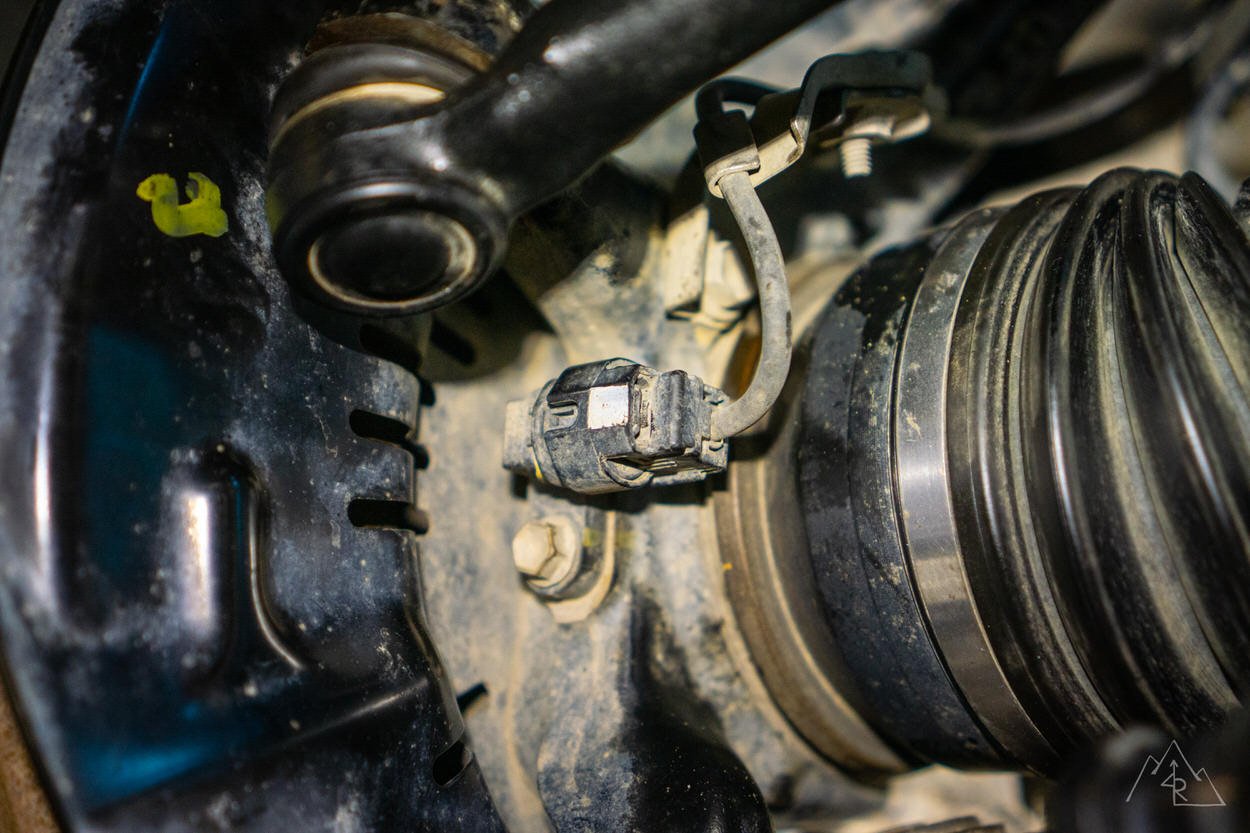 Using a 10mm socket, bolt the ABS wire bracket onto the spindle and plug the wire into the speed sensor on the spindle. 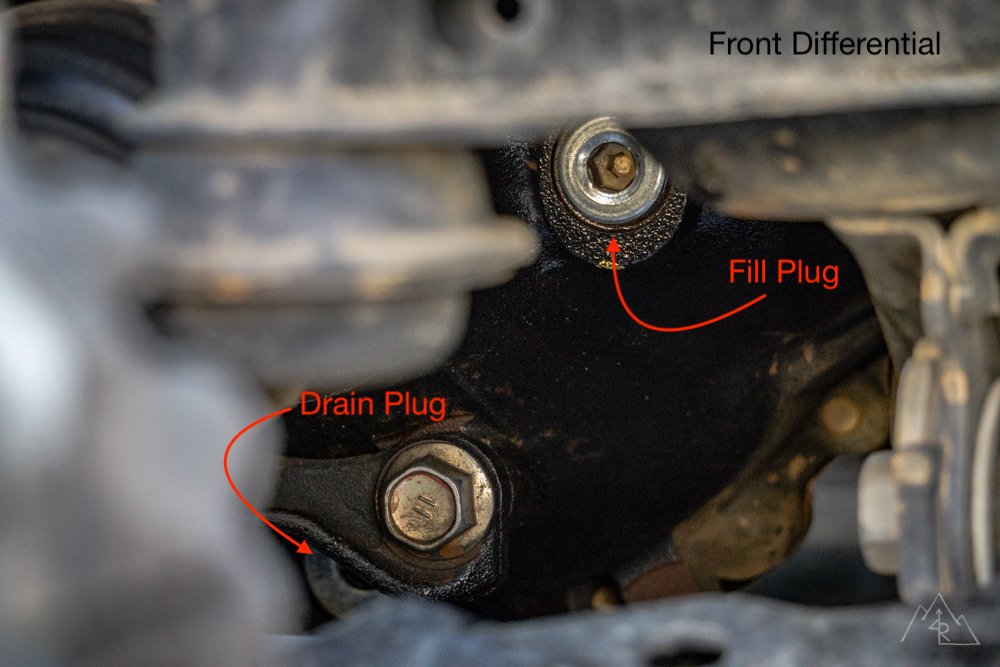 Refill your front differential with the appropriate amount of fluid using this guide. 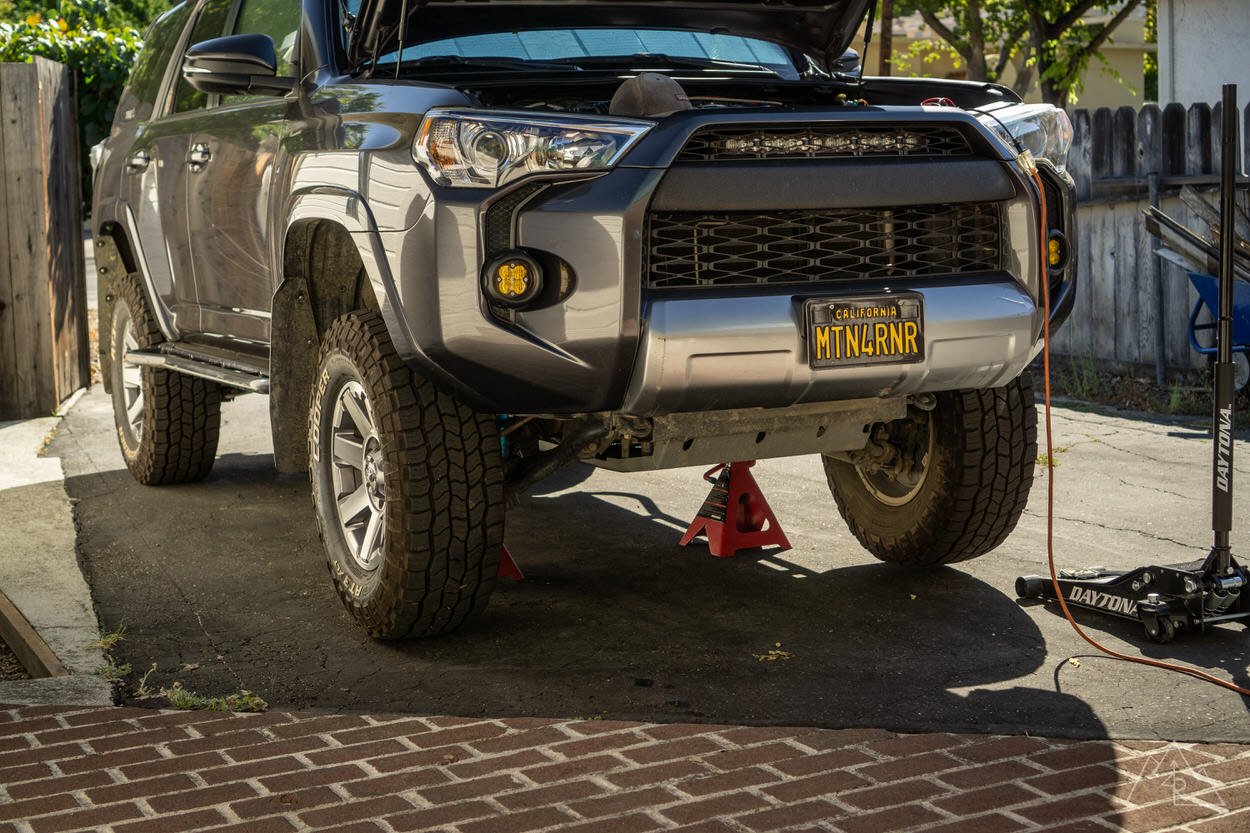 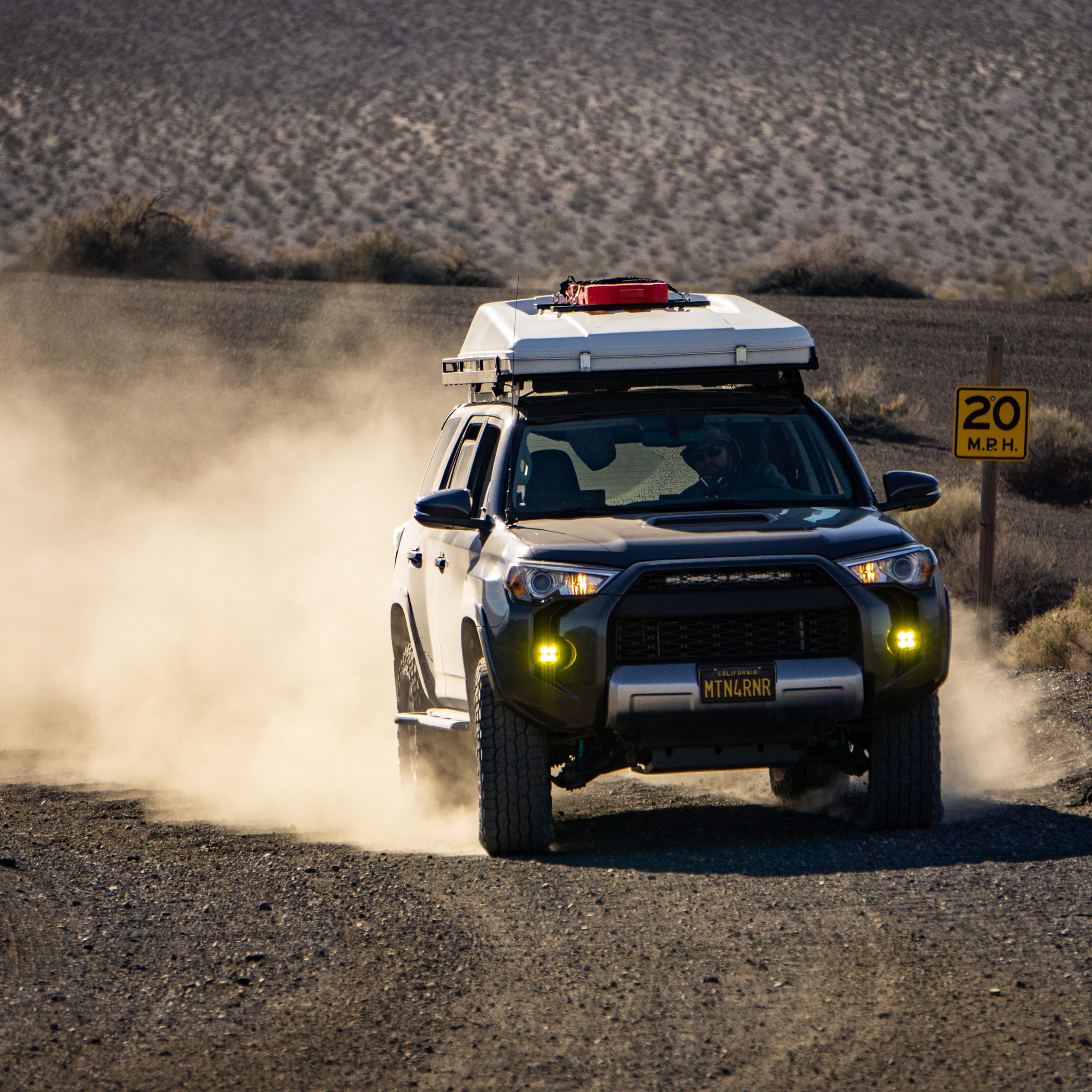 I hope this guide has given you the confidence and know-how to get this repair fixed in your own driveway! Many of the skills learned in this process will be needed if you replace a CV axle on the trail and need to make a trail repair!

Better to practice at home first when the dealership and parts are local and easy to access!

For those looking for an easier way to set the seal, there is a specialty tool available from Wits End in Medford Oregon:

It’ll take the guess work out of the seal depth and a uniform setting. Hey, PVC works too!

Thanks and Cheers,
Mike

Great write-up Max. To prevent the disc from turning while removing/installing the axle nut…you can simply place a screwdriver down into the vented disc slots. The screw driver will rest against the calliper while torque is applied.

excellent , truly amazing step by step post including great photos..thank you so much..
question about seals.
.am I understanding this correctly about the necessary seal replacement to have on hand at time of work
seal for the differentia or seal output shaft seal
and anti dust seal on back of knuckle
so two for each side..
is this correct or am i missing something.
any help would be greatly appreciated

Max,
Do I need to drain the diff or can I just swap out the axle. I’ve seen other vids/write ups where the dif drain is not mentioned or done with minimal leaking of residual fluid at the seal. If seal is in good shape, I’d prefer not to disrupt factory set up but I do have the seal just in case. Drain and refill is due but I have a time crunch and the cv boot was damaged by shop heating during alignment, I believe. I swapped both axles on my 4th gen but that was many years ago. Thanks for all!! Steve

You don’t need to, but you’ll lose some of the fluid when changing things out and you’ll need to adjust the level accordingly after the CV install. Best of luck! // Max

Awesome write up and great content as always! Are there additional considerations for a vehicle equipped with KDSS? Routine maintenance will be done in shop (under warranty), but I like to have info set aside for any trail repairs to limp back to someone with more than my youtube / googling skillset.

Nothing KDSS related for this one as the lower control arm isn’t touched, which is where your KDSS bushing is. Best // Max

What is the 21 mm socket used for? Nice work.. tackling a needle bearing replacement on a 5th gen this weekend.

I hope your project went well over the weekend. The 21mm is for the lug nuts. You can also sometimes use a 13/16″ socket too, depending on your socket type.

Project is done and went well.. figured out what the 21 was for when I went to take the lugs off!! 😉

It’s a pretty straight forward repair if caution is taken, and can serve as a great “practice” for replacing a CV on the trail if needed!