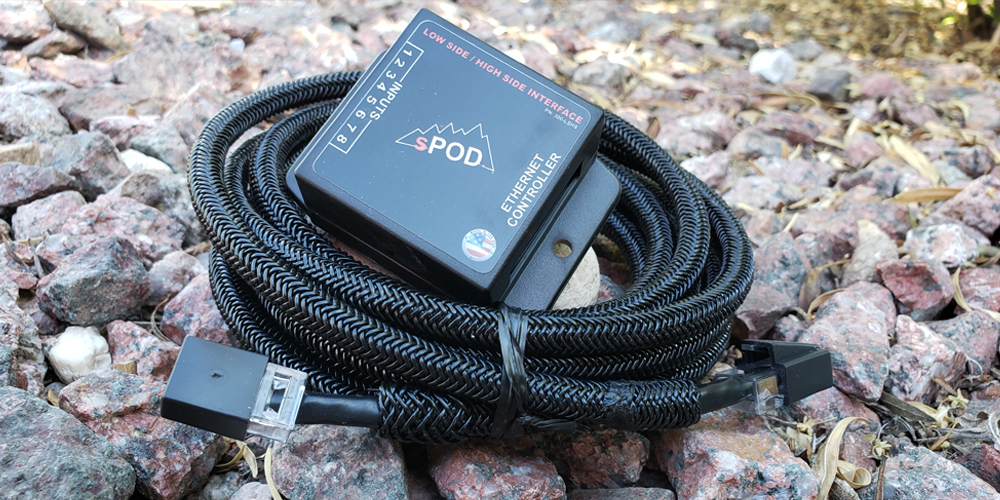 After installing my Victory 4X4 Blitz Rock Sliders that have integrated rock lights I was inspired by the article KC Rock Lights as Courtesy Lights.

This was an awesome idea, especially for living in the desert where rattlesnakes love to hide around tires.

However, I did not want to add another switch as I have already invested in the sPOD Source SE.

I wanted to be able to have the functionality of the courtesy lights with the ease of install and operation from the sPOD touch screen. Not finding any info on the net, outside of some invasive “hacking” of the vehicle wiring, I gave sPOD a call.

I spoke with John and let him know what I was trying to do. His response was yes I could do it using an external relay and 2 diodes, but it may cause damage to the vehicle if I mess it up but he also offered a more simplistic solution.

The 4Runners use a ground signal to trigger the interior lights on/off. The only safe way to trigger the system from the vehicles dome light circuit is to use one of these:

The Low Side High Side Interface is a Plug-N-Play component with the SE system that allows you to control any of the 8 circuits using external devices such as the signal for courtesy lights.

It can also be used for numerous other projects such as attaching an Arduino unit or raspberry pi and creating a motion sensor alarm. It comes with a shielded ethernet cable to connect to the Source SE.

Those lucky enough to have the sPOD Bantam already have this built into their system!

Having the PowerTray and sPOD Source has made wiring easy for my lights, and adding the Low Side High Side Interface is no different.

Placing the Low/High onto the PowerTray, to make sure wires have room and connect without harsh bends or sharp edges. I marked and drilled two holes using a  5/32” drill bit. I used some random bolts that fit from the “box o’ bolts” to secure it down. Clean and easy.


Step 2. Build + Run Wiring Harness From Both Rails to Engine 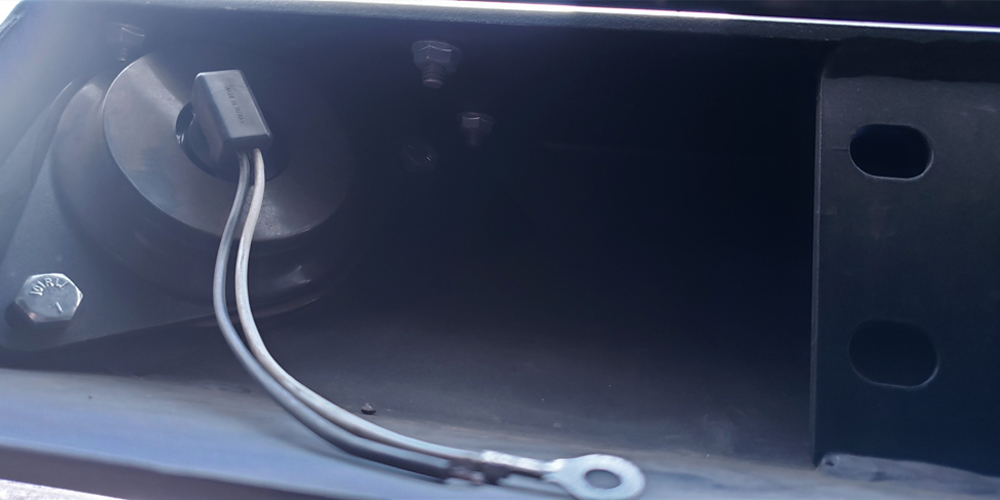 Before I could hook up the sPOD to my rock lights I needed to first build and run a wiring harness from both rails to the engine compartment.

Know your lights, as the included lights from Victory 4X4 are trucker style lights.

These style lights are set up as trailer markers so the black wire is (+) positive and the white wire is ground (-). The majority of traditional rock lights will be reversed in the normal manner.

Running a single wire on both sides as the dry fit is much easier than trying to run both wires at the same time.

Once I got the right lengths I cut the second wire to match.

Afterwhich I loomed the wires to protect them from heat, nature and any sharp edges under the vehicle. I, then, used some male and female connectors to make it easier if I want to change out the lights later on down the road.

When running wires make sure that you are keeping clear of any moving parts and use plenty of zip ties to secure the harness. 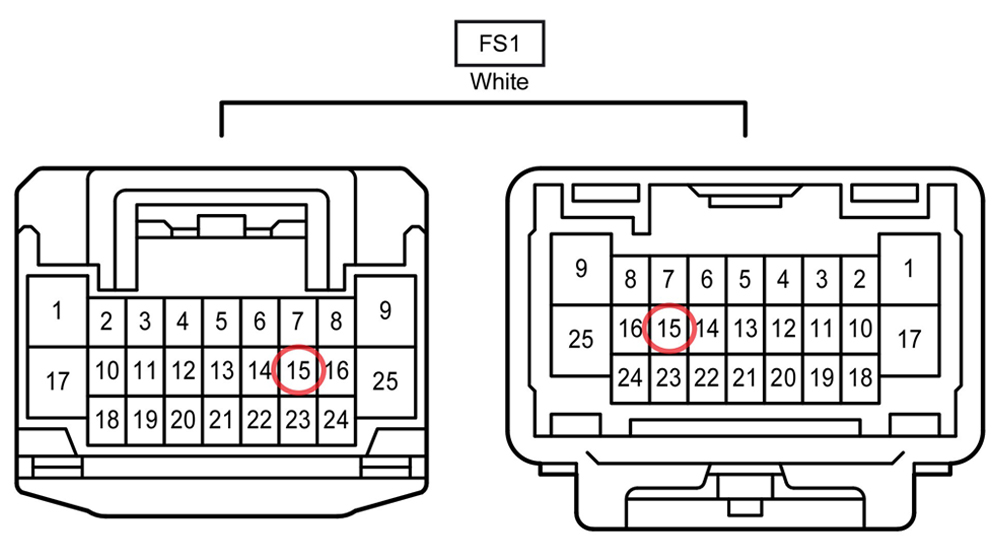 The next step can be a bit tricky in regards to messing up a factory wire. Disconnect the white FS1 Connector. This will allow more room to work.

There are several green wires in this connector. Locate the green wire in Pin 15 in the diagram shown above. 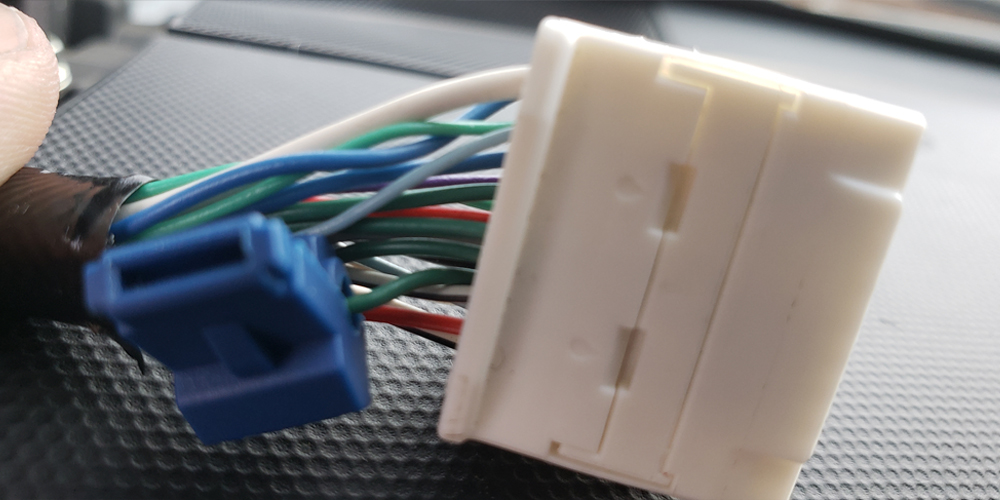 Make sure to disconnect the white FS1 Connector to allow for more room while you reroute some of the wires.

Now, locate the green wire that’s on Pin 15, shown in the diagram from Step 5.


Step 7. Run New Green Wire From Side of Dash To Firewall Rubber Gasket

Run a new green wire down the side of the dash to the firewall rubber gasket.

There is a nub that wire can be run through but I can’t ever seem to get it, so I go around. Just remember to go back and seal up the gasket later. 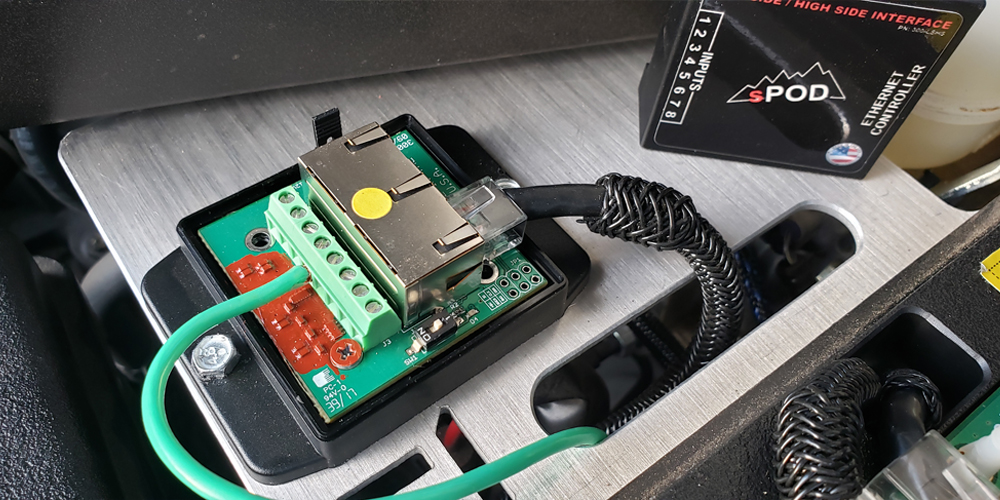 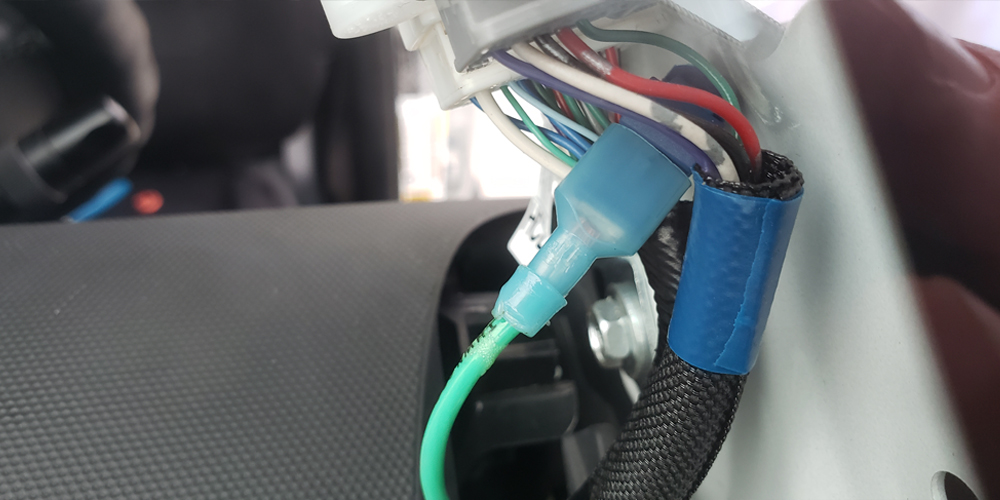 Back inside the cab, trim the new green wire and finish the T-Tap connection. Replace the A-Pillar cover. 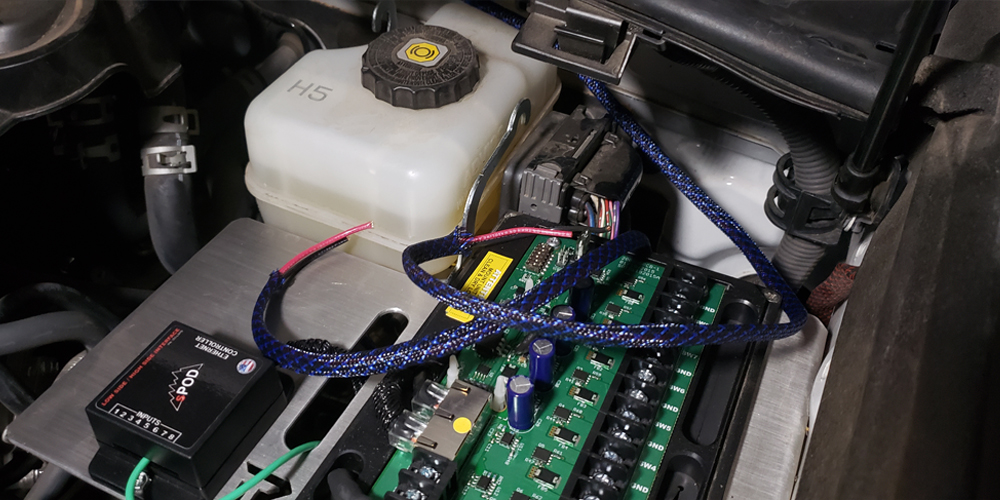 I connected the two looms together with a single positive and negative wires, as I will be adding additional rock lights and don’t want a ton of wires cluttering the sPOD.

The final step is to close it up and admire how simple and clean it all looks. 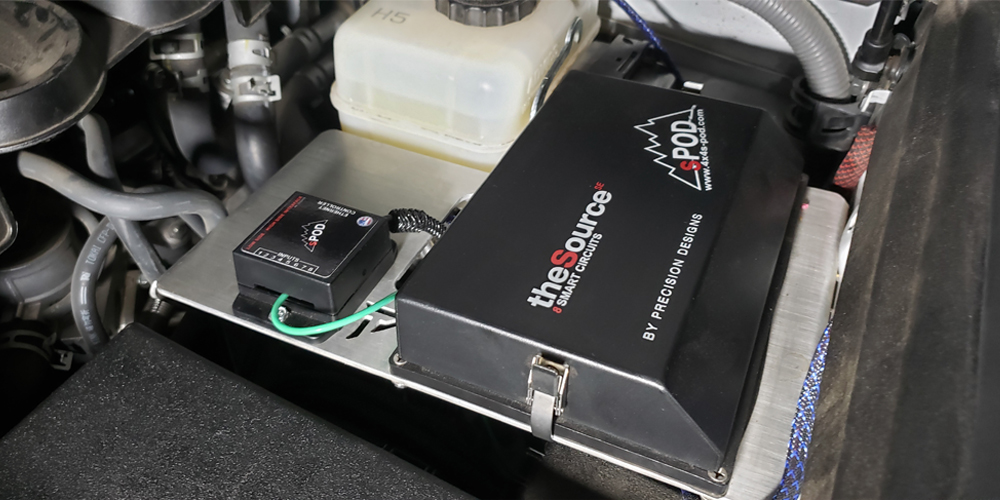 The total install didn’t take very long, in all, I would say a total of 5 hours to complete.

But really 4 of the 5  was wiring and creating the loom for the rock lights. This could be skipped if you have existing rock lights and sPOD already installed, then this would take less than an hour. The hardest part was trying to find which green wire was Pin 15 on the FS1 Connector.

Once I found the wiring diagram (after a 20-minute internet search for reliable beta) it was cake from there. 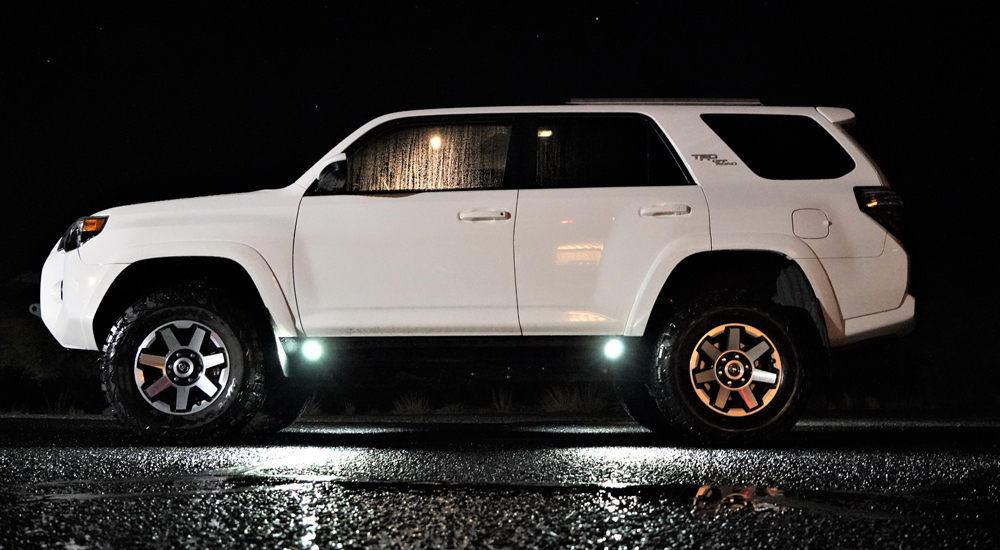 Honestly, I don’t think I would have finished this project without that diagram, not knowing what your doing and the odds of choosing the wrong wire would have forced me to throw in the towel.

Connecting the Low Side High Side Interface with the sPOD is super easy and maintains the clean look initially brought me to sPOD, to begin with.

After having this on the 4Runner it seems like its factory and adds a touch of class and convenience to my normally rugged and utilitarian rig.

Been following you for a bit now great write ups!
I used your info to find the correct wire to hookup my trigger wire on a switch pro9100.
2014 4Runner trail

Thanks for the props. I’m glad it helped out!

Thanks for your question. So the lights only come on with the doors or when you use the remote to unlock the vehicle. They will turn off after a few minutes just like the dome. They will not turn on if manually switch on the dome light. The sPod or switch is the only way to turn them on and keep them on full time. Even then if you open the door they would turn off as soon as you closed it again.

Awesome, thanks! So pin 15 in the A-Pillar is for the door sensor, not the dome light alone?

This was a very good idea, I am in the middle of doing the same thing on my 2020. I am having an issue. There are 2 connectors in the pillar, one grey and one white. I don’t see the green wire in my harness. If I unplug the white harness the dome light stays on. If I unplug the grey harness the light goes out. Do you think something has changed for the 2020?

Unfortunately I can’t speak to the 2020. It may take some research to find the dome power wire.

I have a Bantam and tried to do this same thing…I could get them to turn on but found that they wouldn’t turn off with the dome lights. I may give this another go tonight, but my biggest problem was not wanting to have to turn the switch off every time I got in the 4runner

Awesome glad it worked out for you.

Hmmm, I would say check the wire you connected to ensure it is on the dome light. It should turn off on and off with the dome lights.

Just want to make sure I understand the finished product. Are you now able to turn the lights on by unlocking the vehicle as well as using the sPOD?