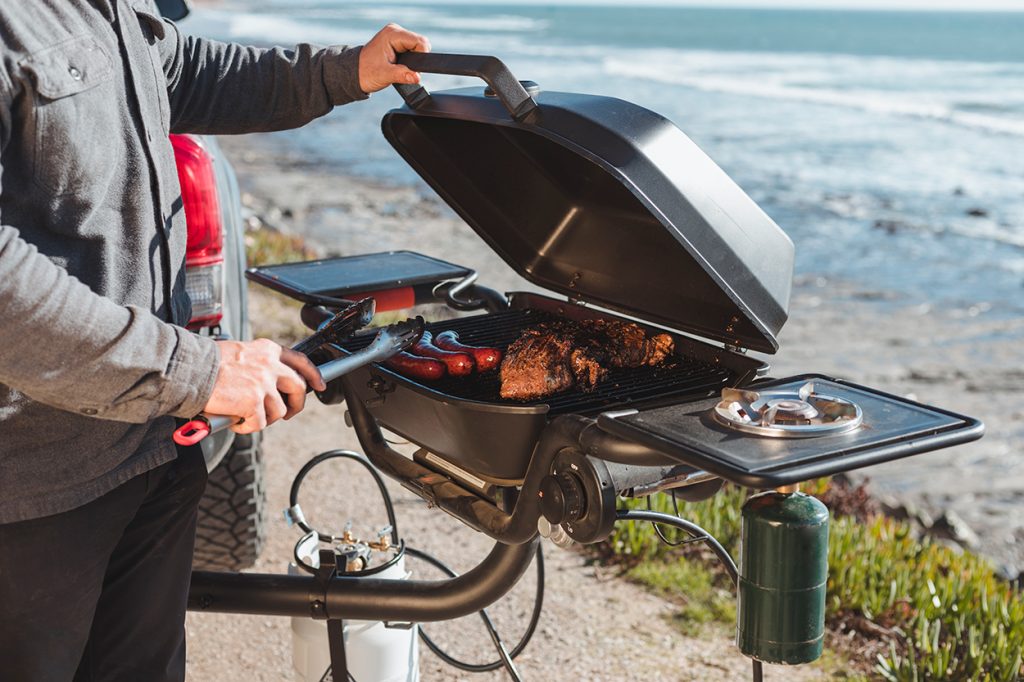 Cooked food is an important element for those of us who participate in off-roading, overlanding, traveling, adventuring, trips to the park, tailgating, and so much more.

Some people might argue that they can get by with food that does not need to be cooked. And while I’d agree with this some of the time, there certainly is something nice about warm food that is right off the grill or stove… especially when you are going on a multi-day trip. 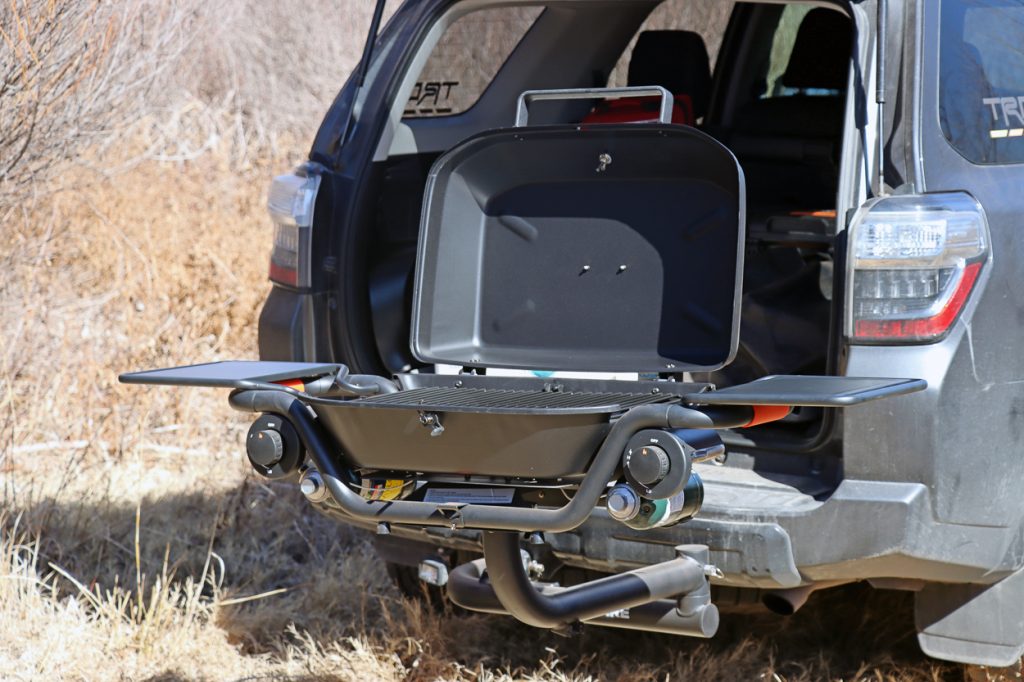 So, what are the different options to cook your food while out and about?

Several problems arise with all of the options listed. First, you might not be at a campsite or park where grills are accessible. Second, transporting a stove in the back of your vehicle can bring unwanted odors inside. In addition, you have to wait for your stove to cool off before you can leave. Lastly, campfires can be dangerous and are not permitted during certain conditions, times of year, areas, etc. Not to mention, campfire cooking is a very primitive method and could possibly limit the number of meals and the complexity of meals you can prepare.

In short, it seems like there should be a better way. HitchFire may have come out with an alternative, superior option! 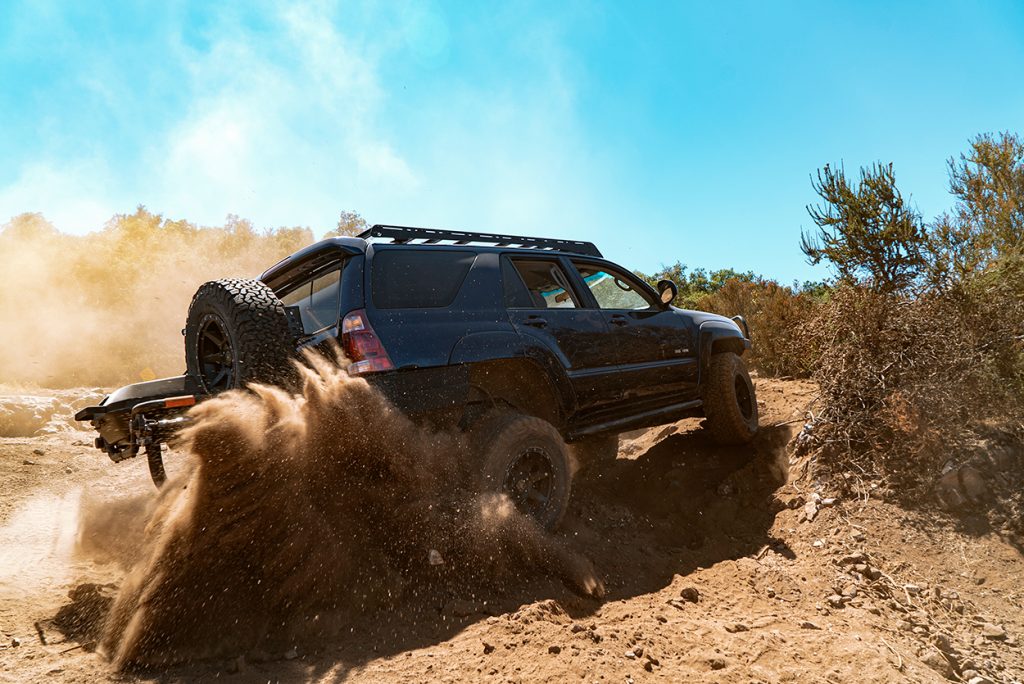 The HitchFire Forge 15 grill is designed to fit into a standard 2” receiver hitch so that you can take a propane grill with you wherever you may roam…even off the beaten path. This might be the park, off-road, at a concert, tailgating, camping, and many other options. The idea is being able to grill anywhere. 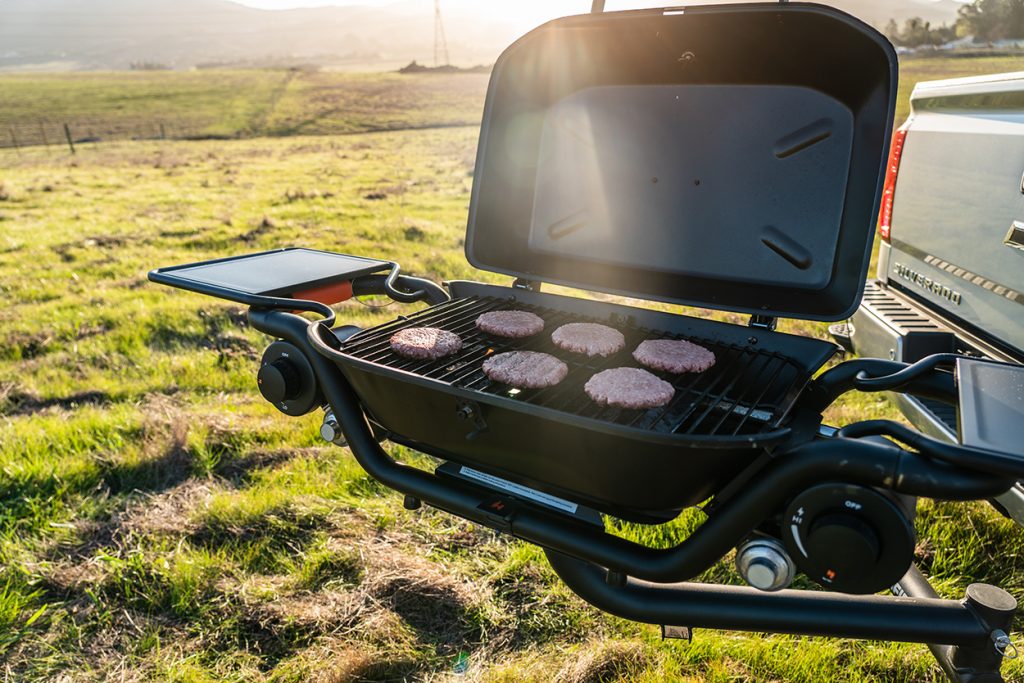 As you can see, the HitchFire Forge 15 has a lot to offer. 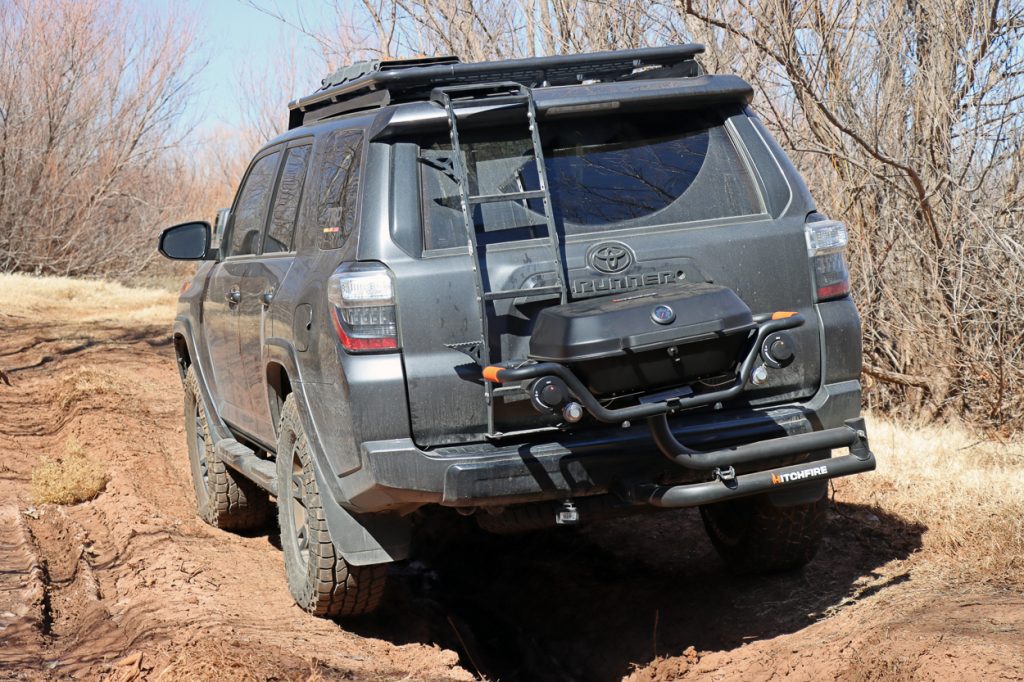 The HitchFire Forge 15 is quite easy to use. Let’s run through the process from start to finish. 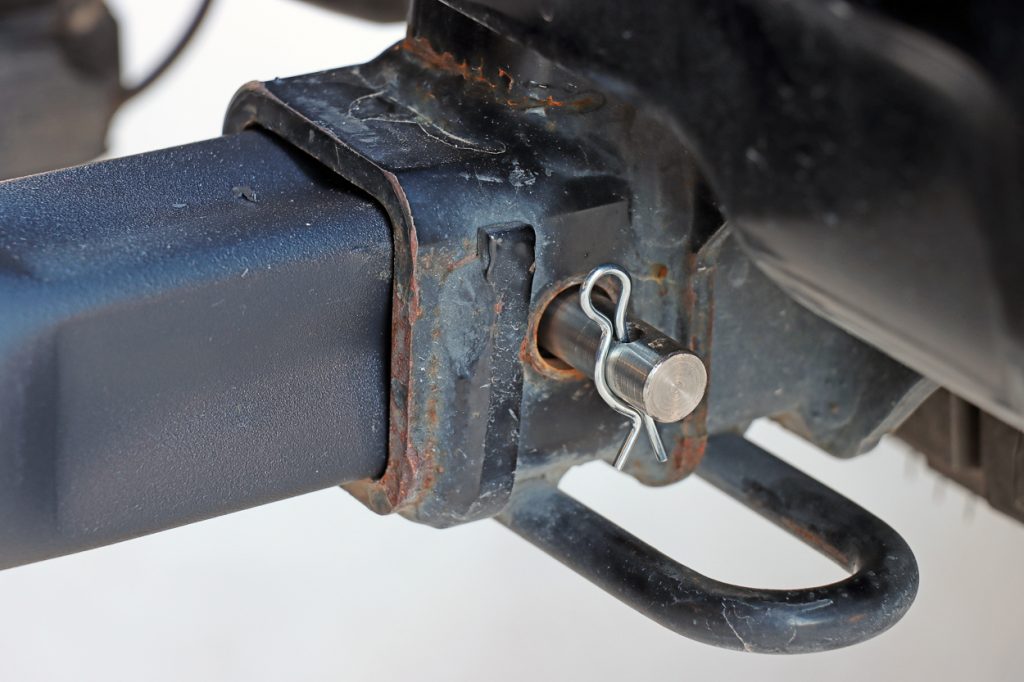 Install the swingarm into your receiver hitch. Then, install the receiver pin, tighten it down, and secure it with a cotter pin. 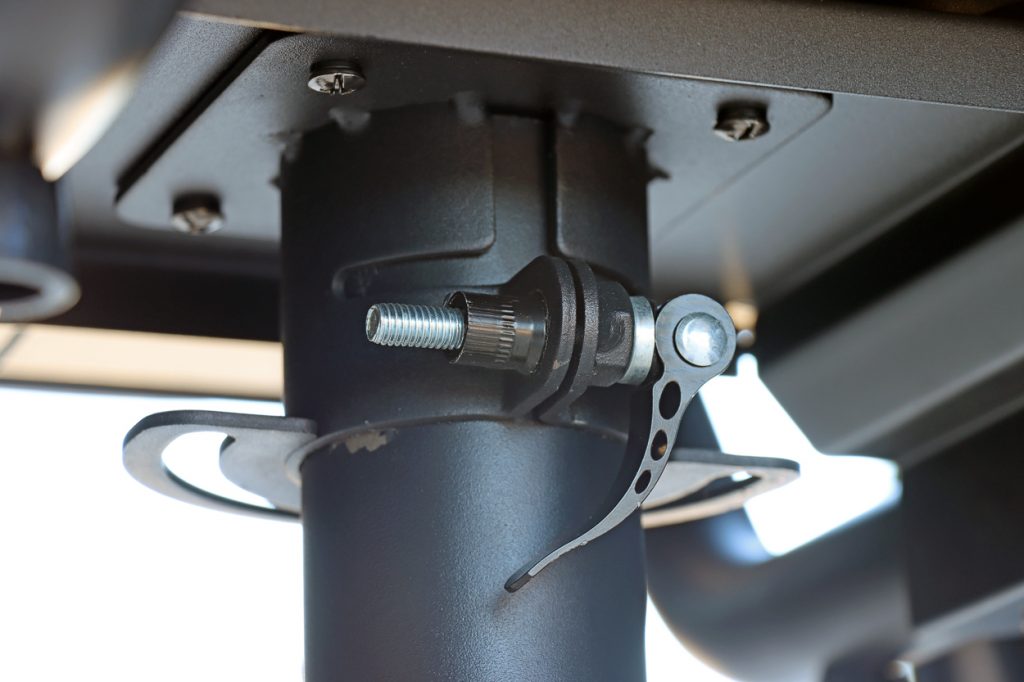 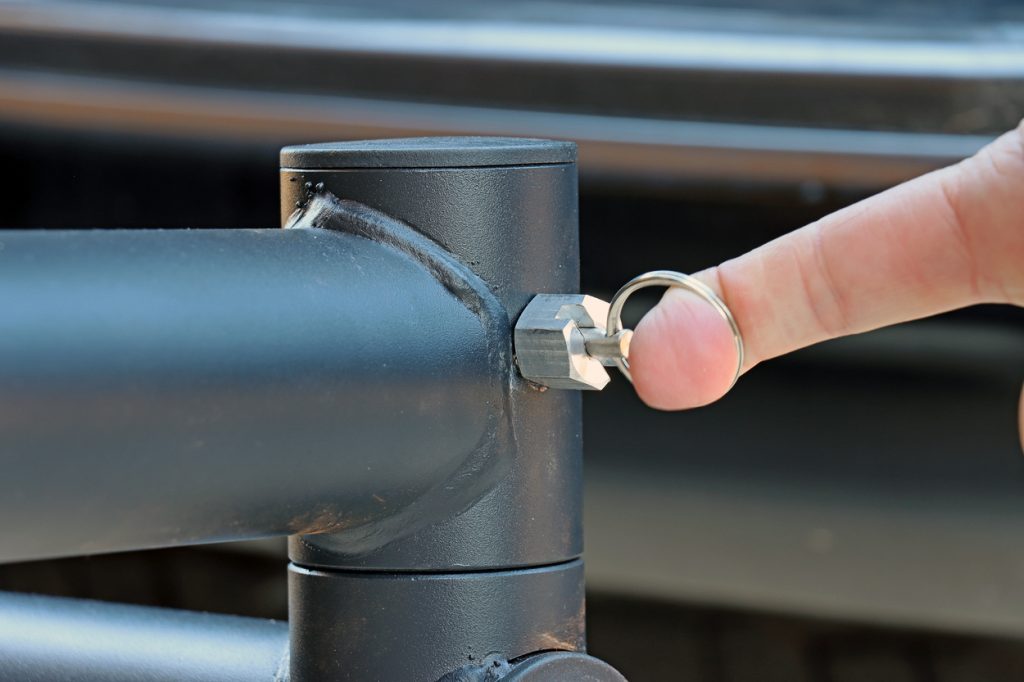 Disengage plunger pin and secure latch, then swing the grill out to a 90 or 180-degree angle. 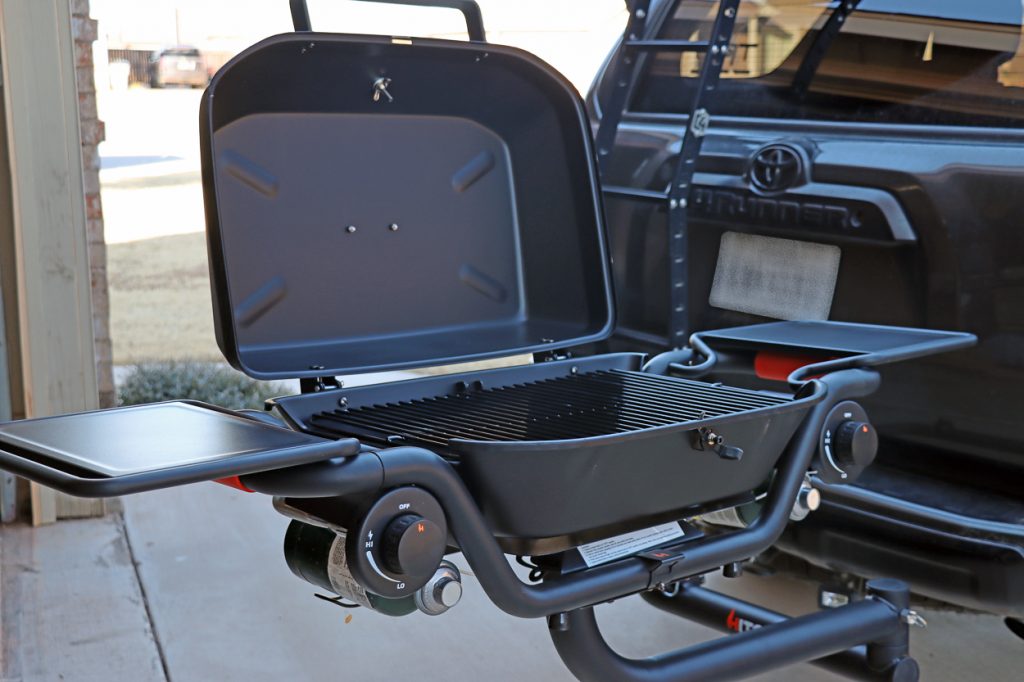 Pull out and counterclockwise on the latch that secures the grill lid. Open the lid to the grill and fold-out the two side tables. 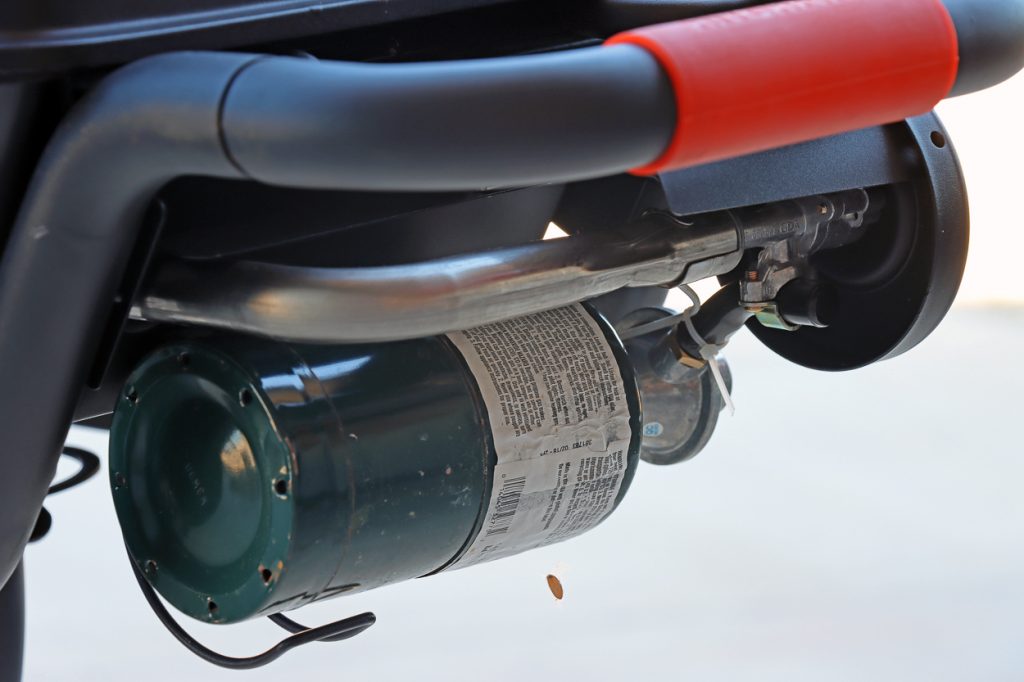 Next, screw in two 1-lb propane tanks. You can also use a 20-lb propane tank with an adapter kit or a 5-lb propane tank via the Refillable Ignik Gas Growler Kit. Push in the burner control knob and slowly turn counterclockwise until you hear a click. At this point, the grill should be lit! 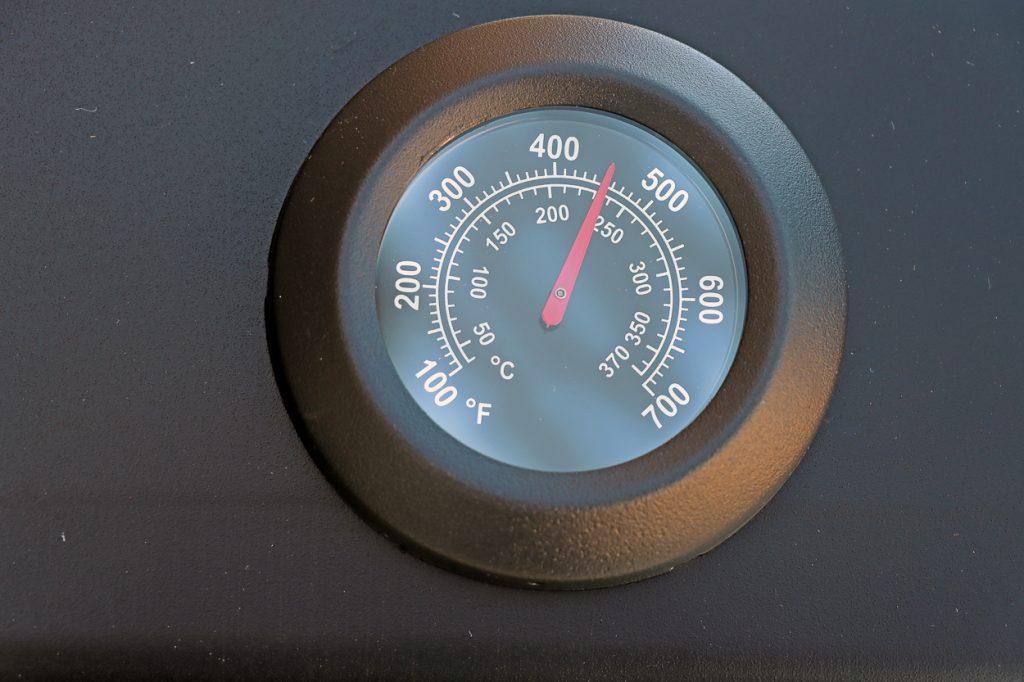 If this is your first time using the grill, you will need to complete an initial “burn-out”. Turn the grill to high heat (450 F – 500 F) and allow the grill to remain at this high temperature for approximately 15 minutes. After this, you are ready to start grilling on your HitchFire Forge 15! 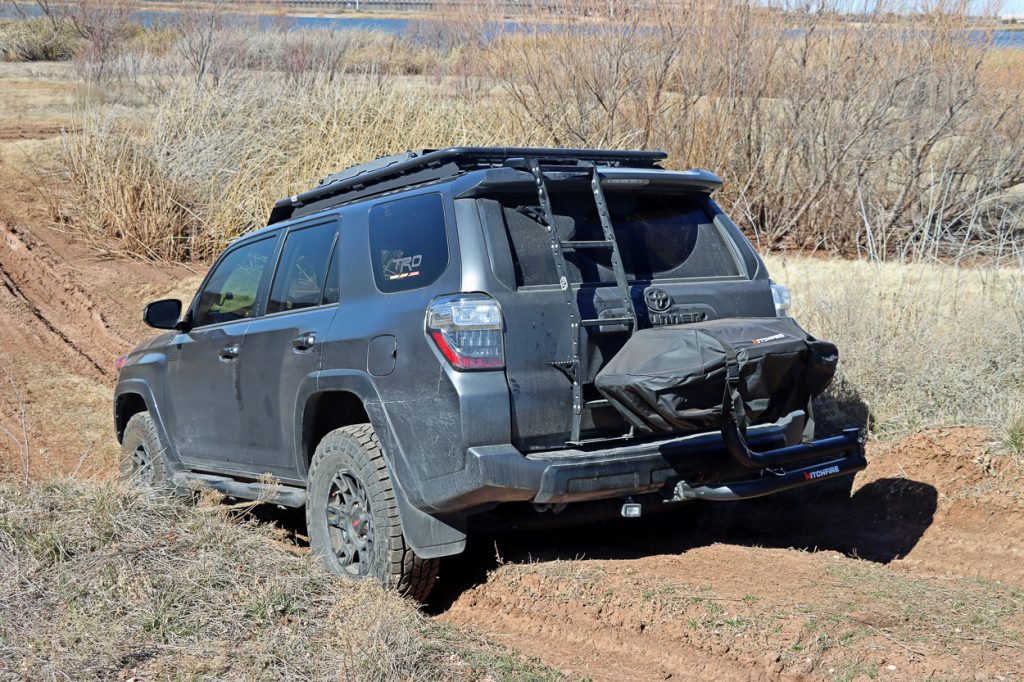 I felt the need to test this grill over off-road conditions in order to see what it’s made of. I hooked up the HitchFire Forge 15 to my 4Runner, loaded up my cooler, and set off to go bbq.

Since I was going off-road, I chose to utilize the optional cover for the HitchFire Forge 15, which protects it from UV, rain, dirt, etc.

The particular location I was headed to required some rugged trails along the way, which I thought would be perfect for seeing how good the HitchFire Forge 15 holds up off-road, particularly if the grill made a lot of noise while traversing rugged terrain.

Once I left the pavement and hit the dirt, I began to listen for any unusual sounds from the grill. To my amazement, there was no rattling whatsoever! The grill really didn’t wobble much either when going in and out of ruts, which I thought was pretty impressive.

I eventually hit the final stretch of trail before arriving at the location I was going to set up and grill. I shifted into 4LO and let my 4Runner articulate over the dirt terrain. I was slightly concerned that the grill might scrape when I was going through some obstacles, but it didn’t touch the ground once. I can verify that the HitchFire Forge 15 can go off-road no problem. The designers of the HitchFire Forge 15 did a great job ensuring that this grill can go anywhere your vehicle can.

I reached my grilling location, parked the 4Runner, and deployed the HitchFire Forge 15 so I could cook some food literally right off of the trail I was on. The HitchFire Forge 15 setup time is next to nothing, which is a really nice feature in comparison to other cooking options which take quite some time to set up and take-down.

I thought about what I was going to grill to test out the HitchFire Forge 15 for quite some time. My initial thought was something like chicken fajitas right on the grill with sauteed bell peppers and onions in a cast-iron skillet; however, after careful consideration, I decided a simpler meal would be better. Something like jalapeno cheddar sausage.

It was now time to fire up the grill!

I installed the two 1-lb propane bottles and turned on the burners. It was quite windy outside (18 mph winds), so I did notice that the burners will go out if the wind gust is powerful enough. While I would like for the burners to withstand winds better than what was tested, I don’t think this is a deal-breaker. Once you get the burners going, you can close the lid to protect the flame from the wind. The wind is something to be aware of though when cooking with the HitchFire.

I placed the jalapeno cheddar sausage on the grill and the sizzling began. Due to the wind, I had to shut the lid quite often, or else the flame would go out.

While I was grilling, I utilized the side fold-out tables on the HitchFire Forge 15 to place my drink and cooking utensils on… these fold-out tables are a great feature! This might seem like a small design point, but it is very nice to have a place to put your drink, your grilling utensils, and some condiments once you are ready to eat. Not to mention that the built-in bottle opener is quite handy when you are needing to pop open a bottle. Although the bottle opener is positioned in such a way that you have to insert your bottle at nearly a 90-degree angle, which results in some of your beverage spilling during the top opening process.

As I continued to grill, I noticed that the heat distribution isn’t perfect even on the grilling rack. It isn’t bad, but there are definitely some hot spots and cool spots that you need to be aware of. This might have been magnified by the wind, but you might have to move your food around on the grill a bit to get everything cooked to your liking. This is somewhat common with propane grills, but I think the heat distribution could be improved a bit.

Eventually, it was time to shut off the grill and take a bite of some jalapeño cheddar sausage, which the grill did a great job of cooking!

After I finished eating, it was time to pack up and hit the trail again. The take-down process was incredibly quick and easy. While you should wait for the grill to cool down completely, one nice feature about the HitchFire Forge 15 is you can leave before it is completely cool since it doesn’t have to be stored inside your vehicle. Another benefit to having it outside is that you don’t have to worry about unwanted scents inside either.

Overall, I am very impressed with the HitchFire Forge 15! 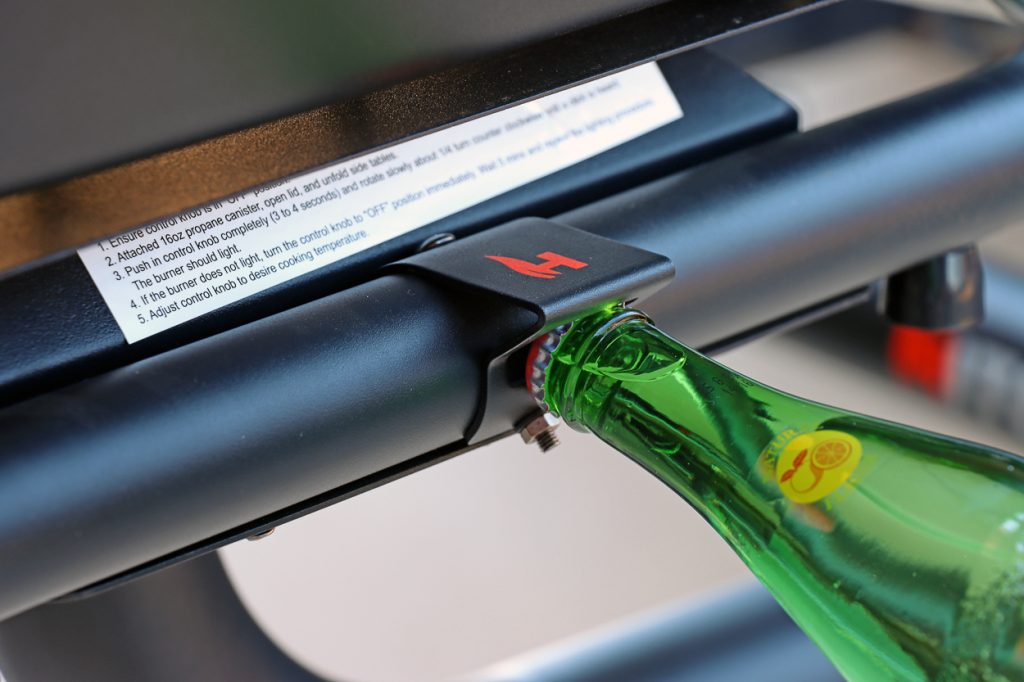 Since the HitchFire Forge 15 is essentially the first generation, there are a few items that I think could be improved. Luckily, none of the potential improvements are big enough for me to not recommend this grill…because it is awesome.

Nevertheless, here are a few items I think could be addressed in the next-generation grill to make it even better.

As I previously mentioned, wind can extinguish the burners on the HitchFire Forge 15. This could particularly be an issue if you aren’t watching your grill intently and the burner goes out only for propane gas to still be coming out. If you want to reduce the wind resistance of the HitchFire Forge 15, you should utilize the 20-lb adapter kit or the Refillable Ignik Gas Growler Kit, as both of these options improve the wind resistance of the grill. 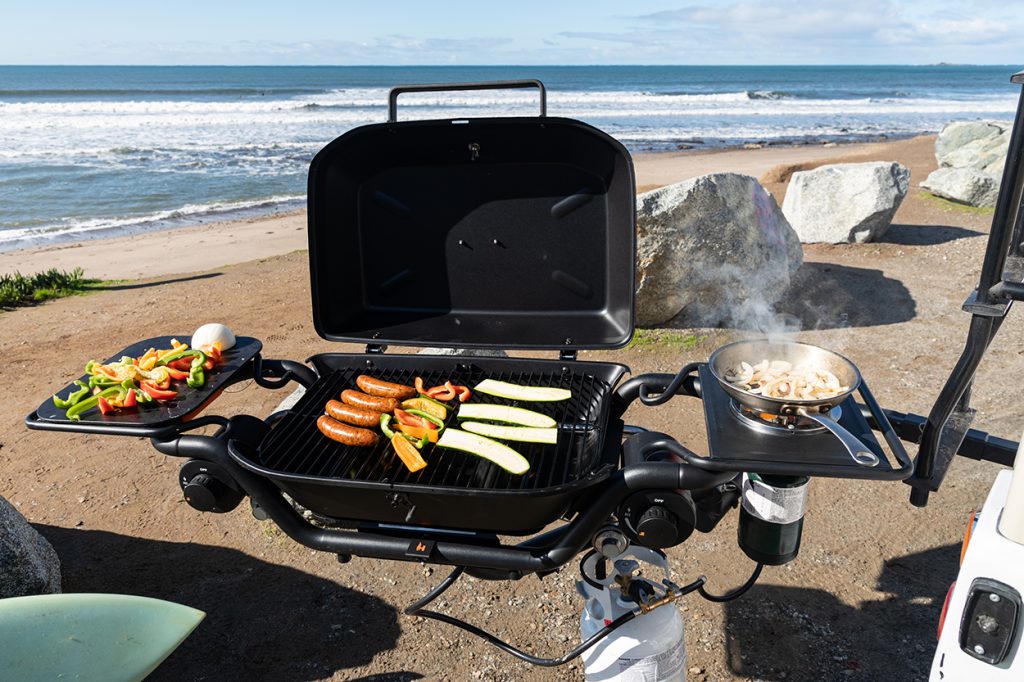 All things considered, I really think the HitchFire Forge 15 Grill is an excellent option for folks who want to cook anywhere, anytime. It is a very well-constructed grill and provides a lot of functionality too.

Having the capability to grill anywhere is extremely useful and I cannot think of another cooking option that is more versatile.

My biggest concern is the fact that it’s 60 lbs! I do well with my newspaper bbq for burgers etc and camp stove for coffee. I see the positives here but 60lbs is just.. I might as well bring my lil big green egg at that point.

I love the idea and design, perfect camping or just going out on a trip and have an outdoor meal…

I gotta see pics on the back of a Rig’d Swing away. !

So I love this idea but it needs a stand for when its off the swing arm. Maybe it has one and I missed it? As a beach or tailgating grill this is hard as rock but I dont need it on my way to Target lol

The grill has rubber feet on the bottom of it so it can sit on top of a table, workbench, or the ground.