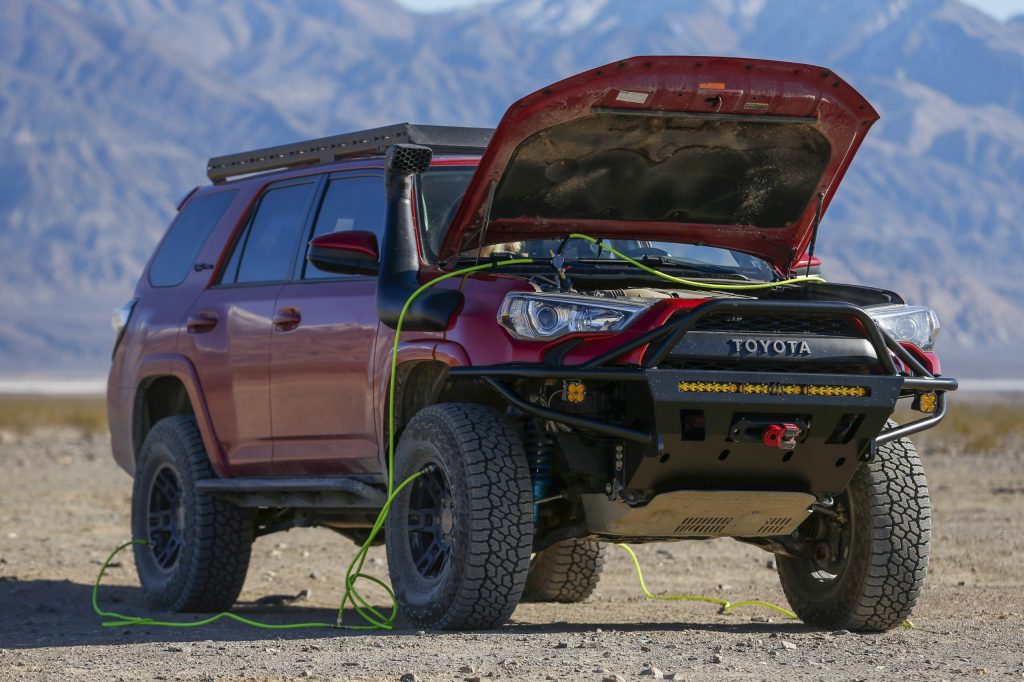 While tools that help you air down and up for off-roading aren’t considered vital, they should be as they can be the difference between being stuck on the trail as well as getting home safely.

Not to mention they can help you with other things such as blowing up pool toys or inflatable rafts for fun at the lake or river.

Why do you want to air down? 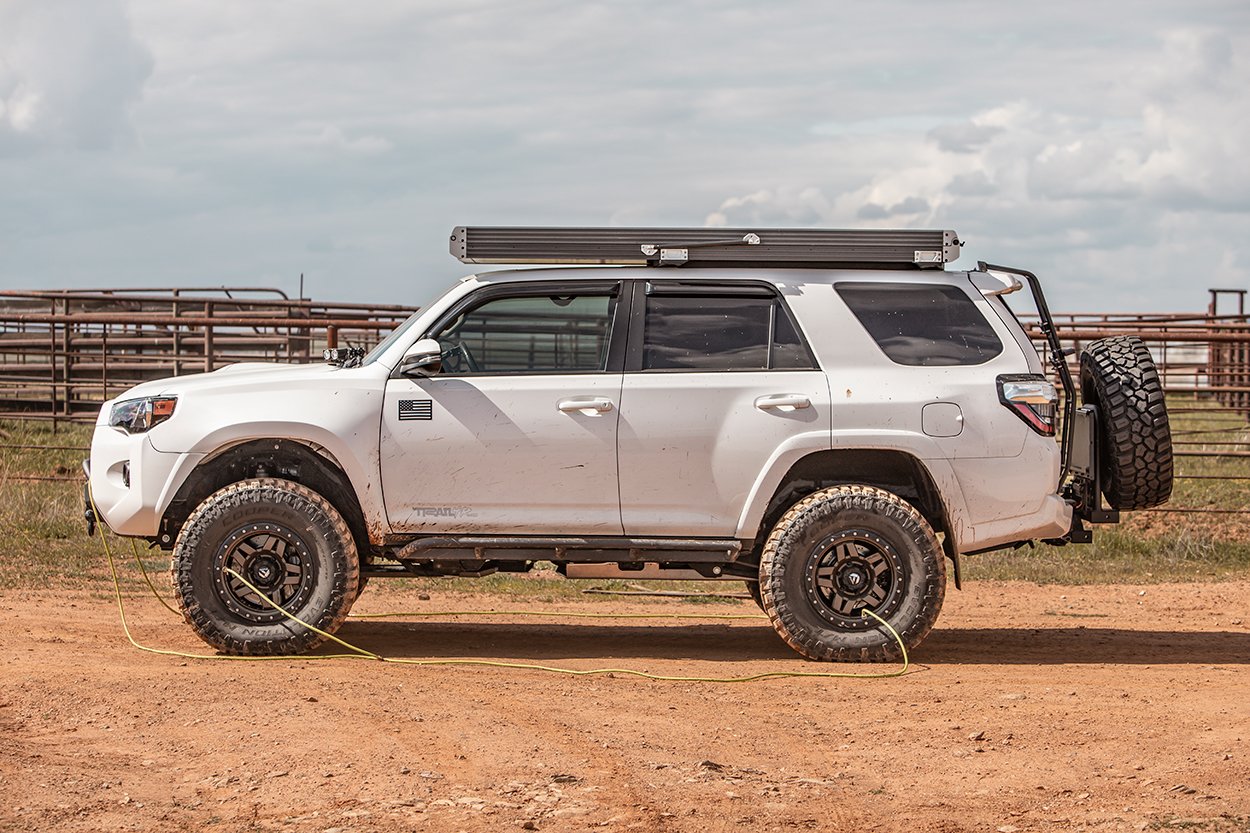 Having a way to air down on the trail is one of the most important things you can have while off-roading. Whether you are in an area that is flat with minor bumps, or a rocky trail up the side of a mountain, airing down gives you numerous benefits and advantages.

For starters airing down your tires instantly decreases the vibrations and bounces you feel while on the trail. Whether you are on a washboard road or a forest road, you are bound to notice how much smoother the ride is. This is also beneficial if you have passengers with you or valuables such as camera equipment. They will also not be thrown around as much, and the shaking will likely keep things in place better.

While you may not notice it to be as smooth, you will notice you have much better traction. Airing down helps your tires get a better footprint, meaning more of your tire is touching the ground versus when they are inflated correctly. This allows the tire to form over rocks better, allowing more grip, as well as get more ground connection when in areas of mud and snow.

When in areas where rocks are sharp, the tires being able to mold over the rocks allows the sharpness to take less of a hit on your tires. In the end it’s ultimately wise to avoid them as much as possible, but when you have no other option you can have more peace of mind going over them. This not only allows your tires to wear better off-road but also prevent cuts from happening. 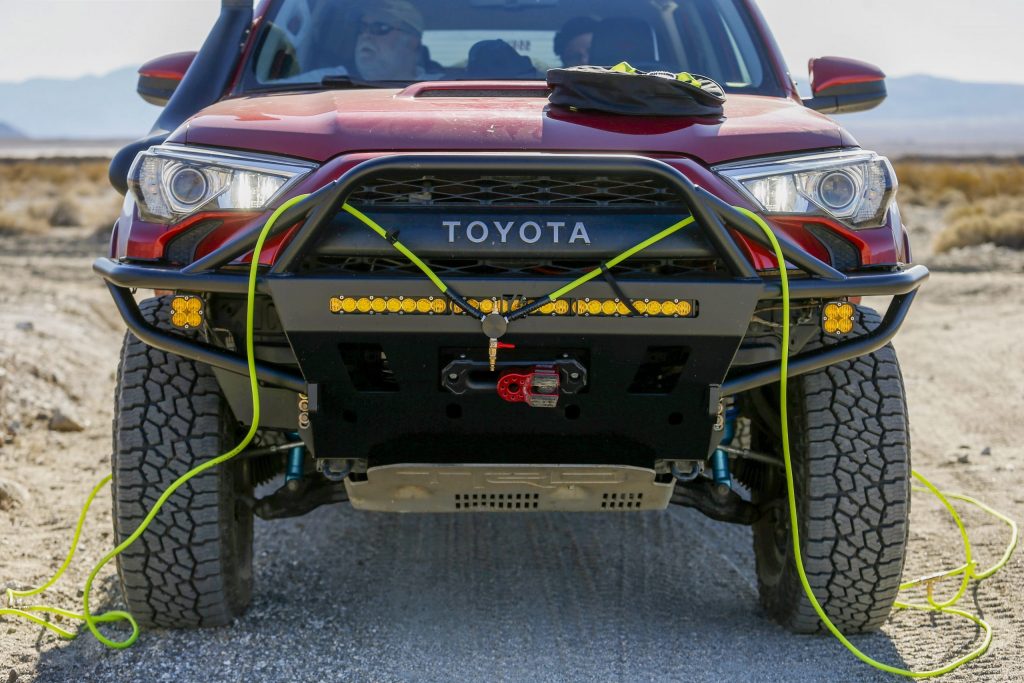 When not aired down and traveling fast over small rocks where you wouldn’t think to air down, such as on washboard roads where off-road shocks such as KING, FOX, and ICON thrive, your tires take a beating, and those harmless-looking pebbles end up becoming a road of nails.

I found out the hard way when I went about 50mph over a light rocky section of road for a few miles. My tires dropped from 39PSI to 25PSI by morning. After unmounting the tires I found over 5 small gashes. Luckily I wasn’t far away from home and the leaks were minimal, but it was a hard lesson learned.

Besides saving your tires from damage, smoothing out your ride, and helping with traction, doing so also helps keep the trail intact, especially when they are wet.

Having more traction means less chance of spinning on the trails, which causes ruts and sometimes causes people with fewer modifications to their vehicle to go off the trail and create new paths, which damages natural resources.

This is how trails are closed down, and why multiple ones this year have been closed.

Do I need to air back up? 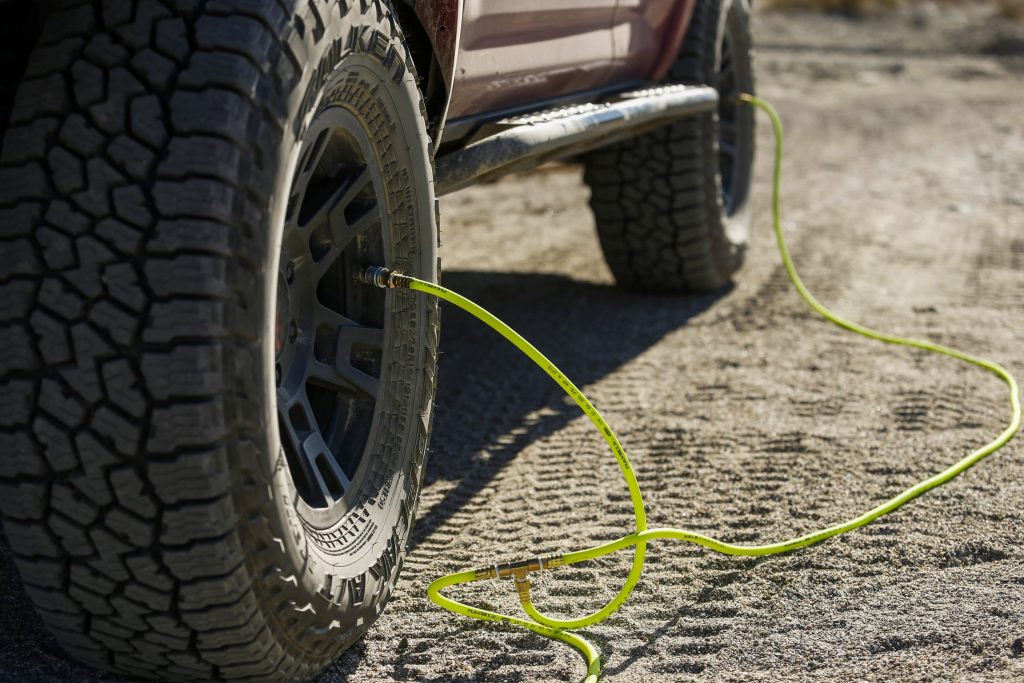 Obviously, if you air down you’re going to need to air back up.

While you technically don’t need an air compressor for this if you are close to a gas station or town where you can get air, what happens when you aren’t? Or the air machine is out of service? Now you have an issue with getting your tires back up to pressure for pavement.

Meaning they will wear horribly, and if aired down too much, are useless at highway speeds. You either won’t be getting home or will need to use someone’s compressor, assuming you went out with a group of friends. Otherwise, you’ll have to hope a random person is out on the same trail as you and is nice enough to allow you to use theirs.

It’s wise to have an on-board air system of some sort, whether it be ones like ARB that is mounted in the engine bay or one like a Smittybilt that is kept in a bag.

That way if you have a small leak, you can fill the tire up on your way home as it slowly loses air, and not have to depend on others.

You’re probably wondering who or what MORRFlate is, and why you should look into them.

My Off Road Radio (MORR) is located in Northern California and covers everything from off-roading trails, to hiking, as well as radio classes (both online and in-person). If you are in California or visiting the area, whether to hike, wheel, or explore, be sure to check them out for information on just about everything off-road. 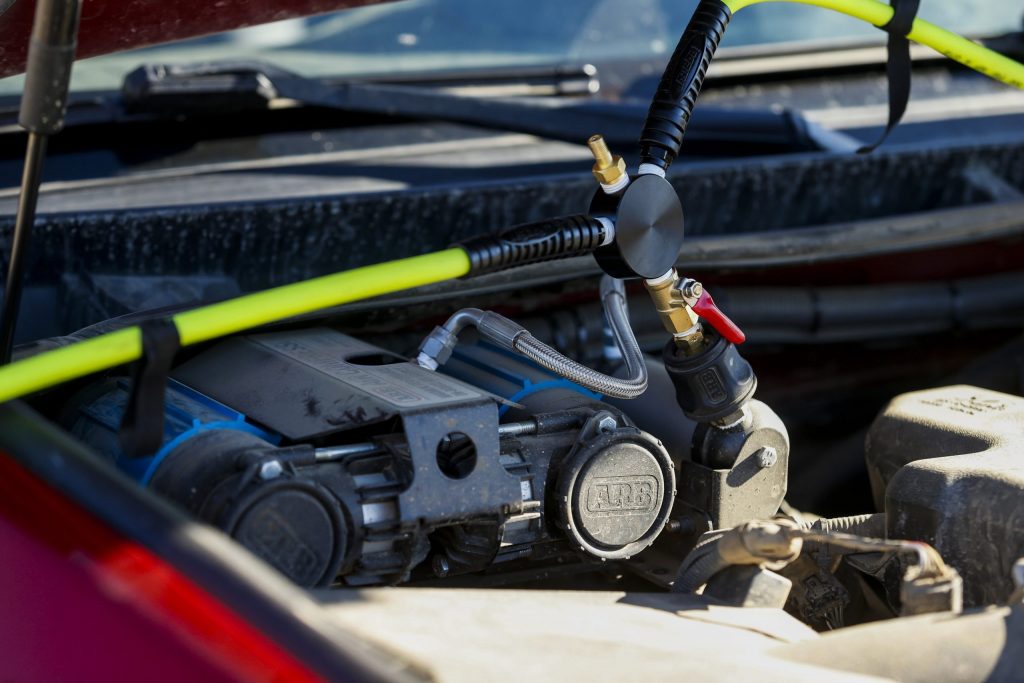 MORRFlate is a tire inflator and deflator combination built into one system. You will need an air compressor of some sort for airing up, but besides your source for air, it does everything else you will need.

The MORRFlate features multiple different ways to air up/air down your tires, and give a variety of options on how to do it:

Needless to say, you have multiple different options and ways to air up and air down your tires, which is extremely convenient.

One of my favorite features is that the hoses do not kink.

If you have a hose of any sort, especially the ARB, you probably have noticed they only like to be put away in the same way — and when you go to use them you have to allow them to “straighten” back out. This isn’t the case with the MORRFlate.

You can put it away however you like, in whatever type of storage, and when you go to use it you don’t have to straighten them back out. Additionally, they are neon green in color so they’re easy to find, whether sitting in the dark or out in the open.

The air chuck connection system is also extremely nice as you don’t have to worry about screwing on the air compressor hose, or bending over and holding down the air gauge to fill up the tire, or airing down for that matter. You simply push the chuck over the stem and lock it on. Done. 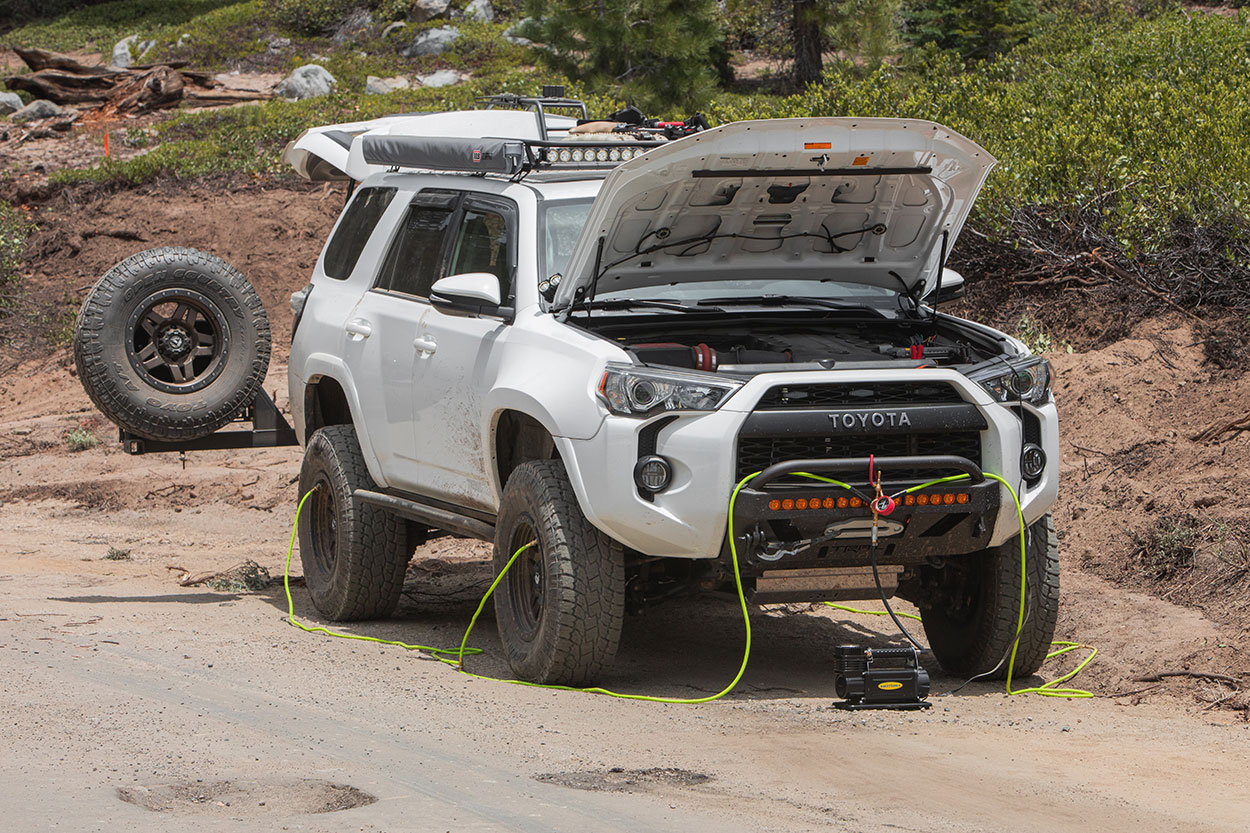 One of the best things about MORRFlate is it’s nearly compatible with every single air compressor on the market. If you have an ARB Compressor such as myself, you simply can push the manifold into the ARB itself. There are other compressors that might not work with it 100%, but MORRFlate has the pieces you need to make it work. Regardless you shouldn’t have much of an issue with this, and if you do they have you covered.

MORRFlate also has made two different versions to fit with your vehicle’s wheelbase. There is a 125” version as well as a 155” for those of you with a longer wheelbase. For the 4Runner a 125” will work just fine. However, if you are someone with a Toyota Tacoma that is four-door and has a 6’ bed, you’d want the 155”. They also make an 8ft extension as well, if for some reason you need even more length.

How does it work? 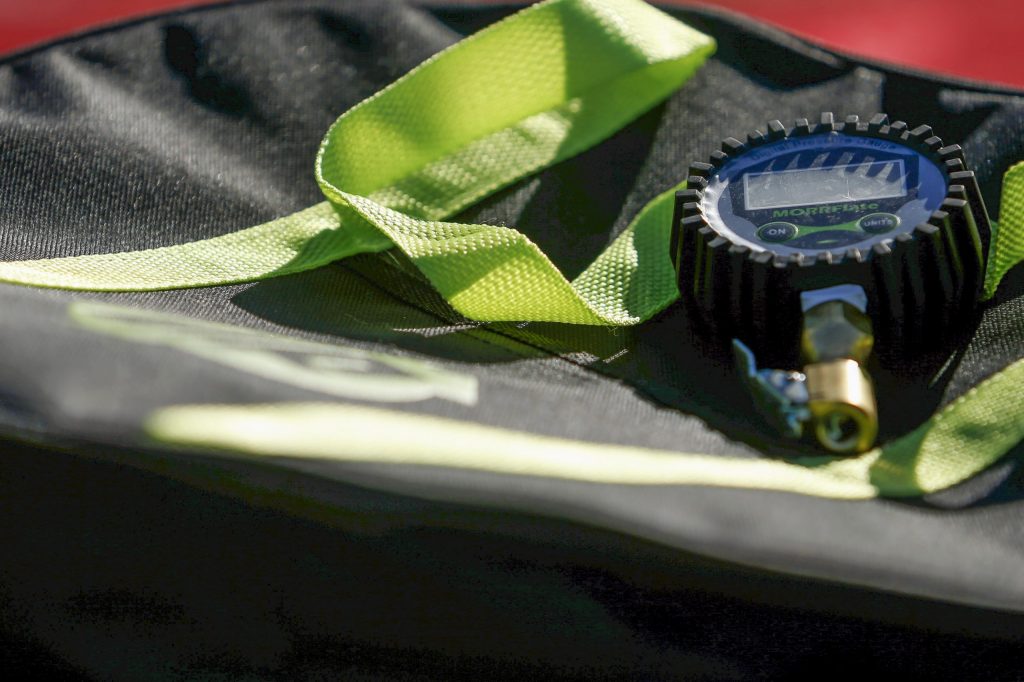 The airing up and down process is basically the same, the only difference is when airing up you need the manifold to connect to the air compressor while airing down you connect it to nothing.

You simply want to take your MOORFlate out of the bag and place the manifold at the middle of your hood, or hang it off a bull bar on your bumper. Somewhere dead center is where you want it, but it doesn’t have to technically be center as long as the hoses can connect to your vehicle.

That’s it. Move the lever straight with the hose on the manifold and allow the air to release. When you are ready to check the tire pressure, simply move the lever to the right to stop the release and allow it to sit for five seconds to equalize the tires. Whatever your gauge shows you is what all tires the hoses are connected to are set at. Meaning if you have hoses connected to four, all four hoses are set to that, if two, then those two are set to it.

To air up simply do the same thing as above, except have the manifold connected to your air compressor. When you put the level straight it will put the air into the tires, rather than take it out.

How is version 2 different? 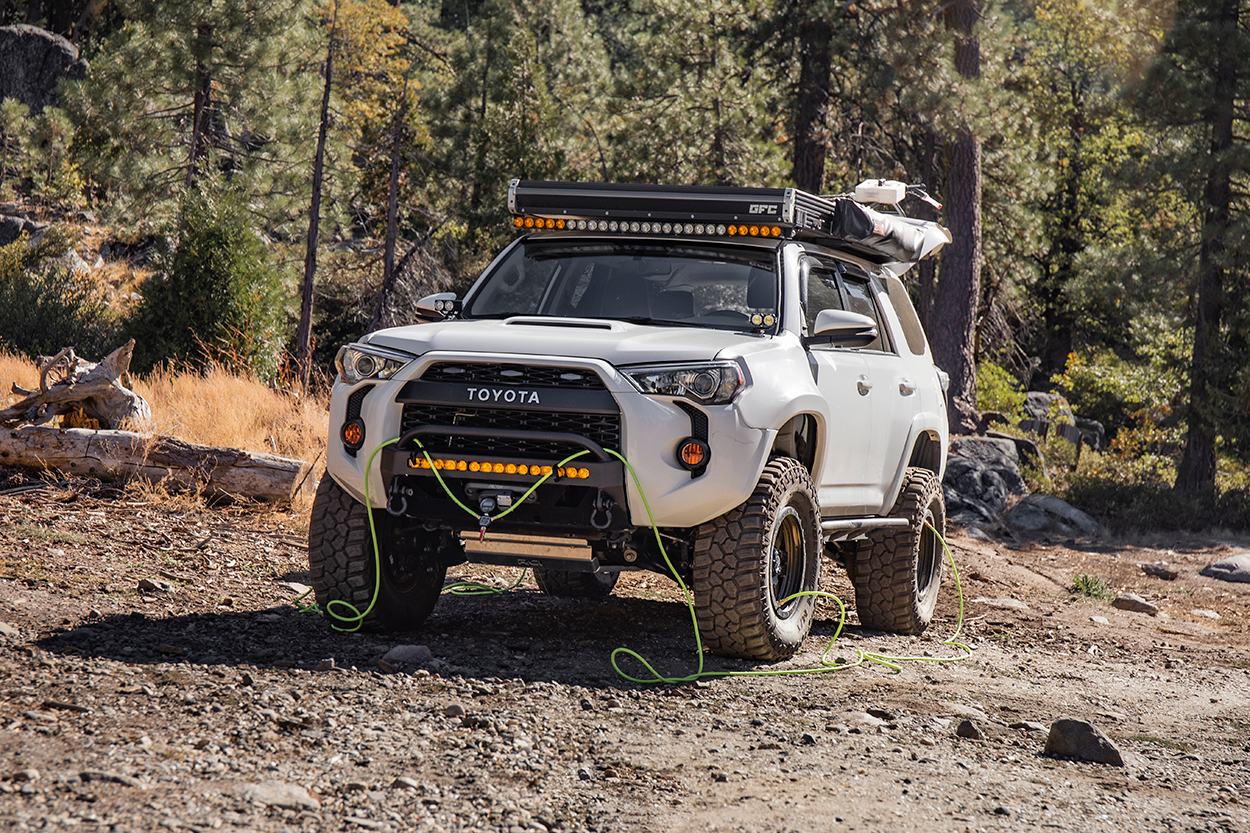 MORRFlate has made a few modifications for version two that is different from version one.

For starters, the manifold has been upgraded to a smaller volume, made from 6061 billet aluminum. This means it’s smaller in your hands, making it easier to hold, as well as it is lighter in weight.

MORRFlate has also added a new bag to their setup which is extremely convenient. Not only does this help store the hoses away with your other gear, but it also keeps things from possibly getting into the air chucks such as dirt. There is also an outside velcro pocket for extra attachments if you happen to own them.

I keep my ARB compressor attachments for things like pool tools and footballs there. The other nice thing about the bag is that it’s more than roomy, meaning you don’t have to put the hoses away the exact way they came in fear of them not fitting.

There is also a new gauge option that is available for the MORRFlate. While you can technically use any gauge with the MORRFlate, the accuracy of the MORRFlate gauge may be something you want to consider. The majority of gauges on the market will not read properly expect beyond 50% of the total PSI. Meaning if you have a 100PSI gauge it will only read accurately at 50PSI.

That means if you run 40 PSI in your tires, you would only want an 80PSI gauge to ensure you are at 40PSI. Below and above that it will start to read incorrectly. The MORRFlate gauge, however, is accurate up to 300PSI. While that is overkill for just about everyone, it’s the confidence of knowing you are running your tires at the correct pressure for both off-road and on-road. You don’t want to risk popping a bead on the trail or under inflating your tires on the highway causing premature wear.

As someone who has to stand a lot for work, my back tends to get aggravated easily. As you could expect, constantly having to bend over to check tire pressures while airing up and down can cause it to tweak on me. Thankfully MORRFlate has eliminated that issue for me as I spend roughly 15 seconds bent over now total.

There are other ways to fill up your tires at the same time such as drilling holes and adding connections for each tire in the wheel well areas, but if you are looking for a simple plug and play option that leaves you with fewer hoses and time bent over this is the kit for you.

What brand of sliders are on the red rig?

“The majority of gauges on the market will not read properly expect at 50% of the total PSI“. I’d replace “expect at” with “beyond”