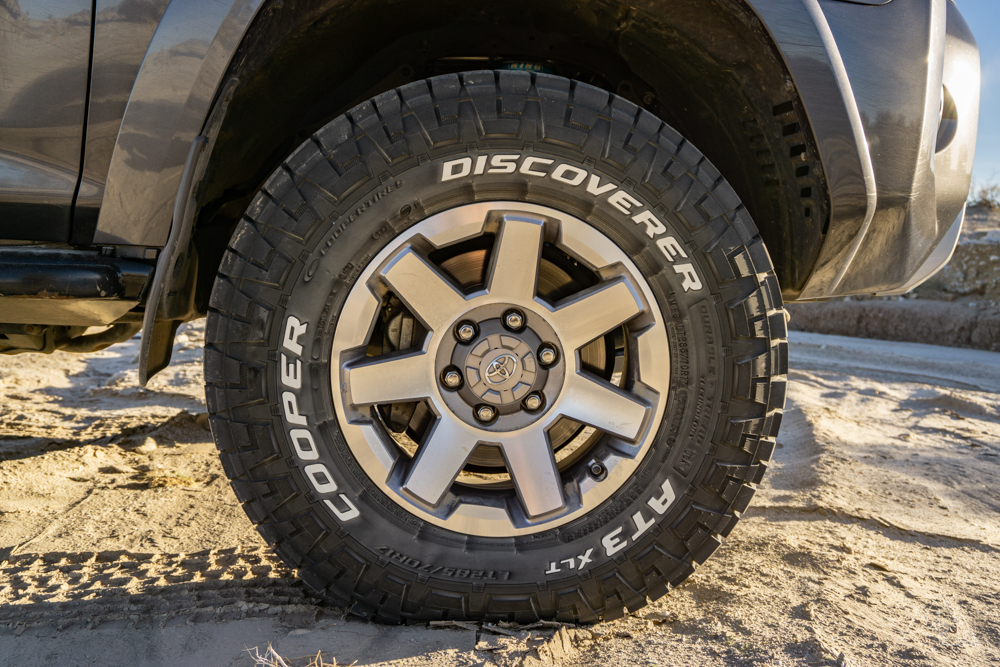 Design, Tread Pattern, and Initial Impressions. Are the Cooper Discoverer AT3 XLTs for you?

“When the time comes to replace the set, likely before the winter, I will be replacing them with their skinnier cousins the 255/80R17 S/T Maxx…. But the question of whether or not I will be purchasing a different tire has never come to mind.”

That is where I left off when I reviewed my trusty set of S/T Maxx tires. However, when the time came to replace the tires on the 4Runner, I decided it would be good to try a different set of tires that would potentially suit my needs to compare to the ones they would be replacing.

How can you know how good the tires you have grown to trust are without comparing them to something else? For the new rubber, I decided I wanted to stay in the Cooper Tire family.

They are made here in America and have a great reputation as a tire company, and ultimately my goal wasn’t to switch tire brands, just to try a different tire. 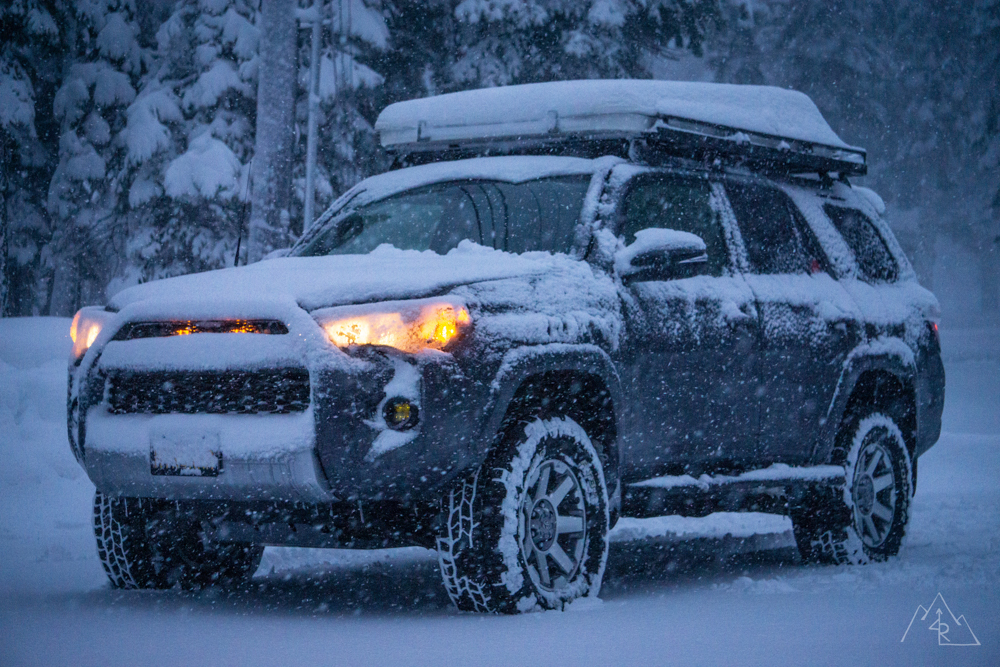 As much as I love spending time off the beaten path, ultimately I drive a lot of paved roads to get there.

This is pretty common for the weekend warrior here on the west coast, and it often leaves a dilemma in the minds of a tire buying off-road enthusiast.

How much off-road capability should you sacrifice for on-road behavior and durability? With the Cooper Discoverer AT3 XLT, hopefully not much. 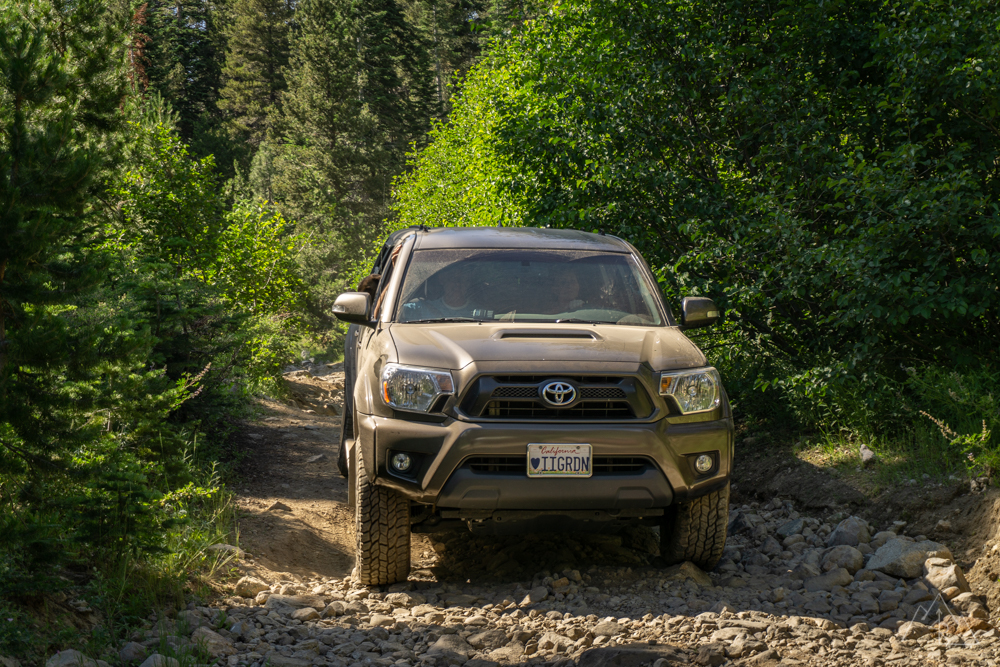 Cooper pioneered the popular AT3 tread pattern years ago and it has been an unsung all terrain hero amongst off-road enthusiasts since its debut.

With a subtle tread pattern that combined an effective tread design and a durable compound, they had the right stuff to get you from point A to point B without sacrificing on-road durability.

For the original model, despite its great reliability and off-road traction, one drawback as expressed by fellow adventurers was the lack of sidewall design and protection.

With a very straight forward sidewall design with little to no shoulder and sidewall meat, the AT3 would often be written off as “not aggressive enough for my needs”, regardless of how good the main tread design was.

With the reintroduction of the AT3 line in the summer of 2018, Cooper addressed this common criticism and updated the well-regarded tread pattern with a selection of three new tires featuring different sidewall designs to match the aggressiveness needed by their users.

The AT3 XLT’s are the most aggressive of the group with a pronounced sidewall design that drastically enhances the look and capability of the tire. With this added off-road capability, they were chosen for the next set of tires for the 4Runner. 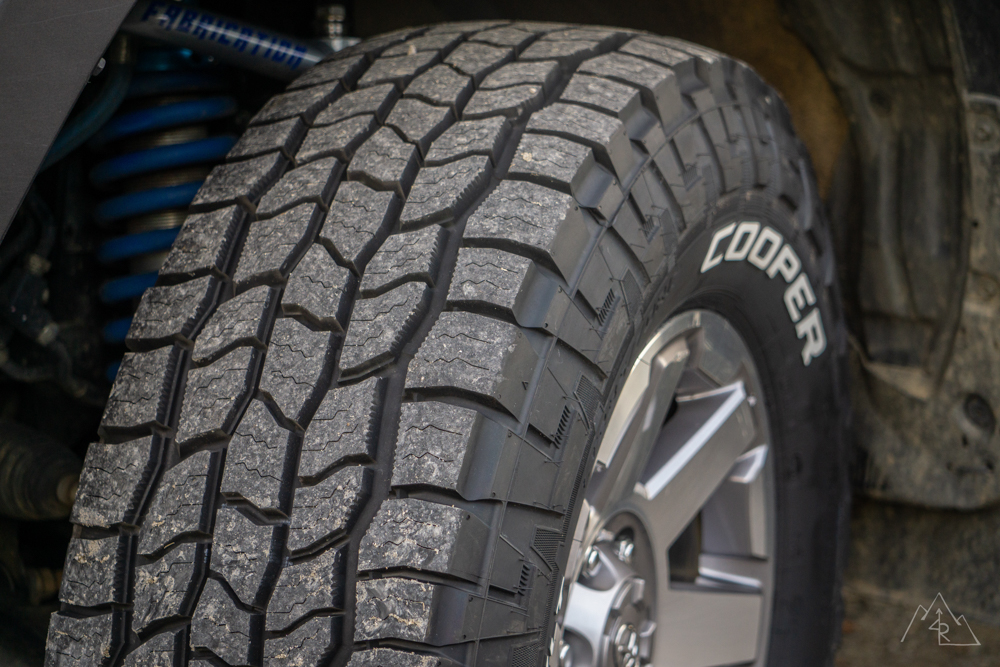 The Discoverer AT3 XLT tires have a number of design features that make them a great candidate for the 4Runner. 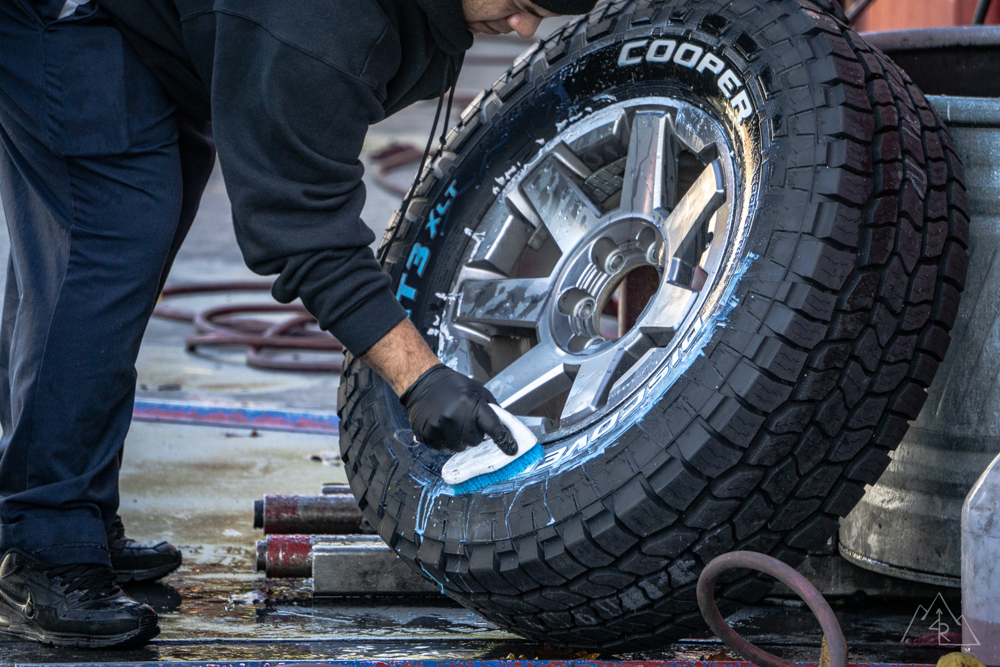 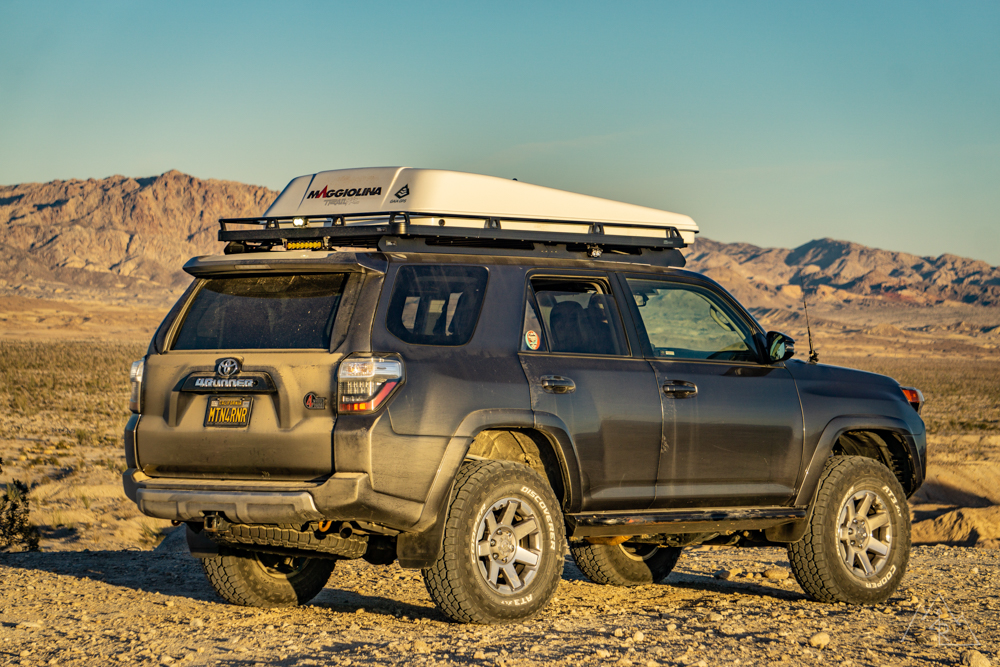 I have had these tires installed on the 4Runner for the past month, covering just over 2,000 miles. In that time I have been into the desert in Southern California, through a blizzard in the Sierras, in multiple rainstorms, and over many miles on the highway in-between.

The first thing that I noticed when they were installed was how quiet they are on the road. My S/T Maxx’s that these replaced were still what I would consider quiet after the 55,000 miles that I put on them, with only a light hum noticeable at highway speed.

Compared to the AT3’s however, I now realize what quiet really is. For our holiday trip to Southern California, but my wife and I noticed the drastic reduction in road noise along with the increased comfort over irregular road surfaces.

For the combined 16 hours on the road there and back, this difference made our trip much more comfortable. 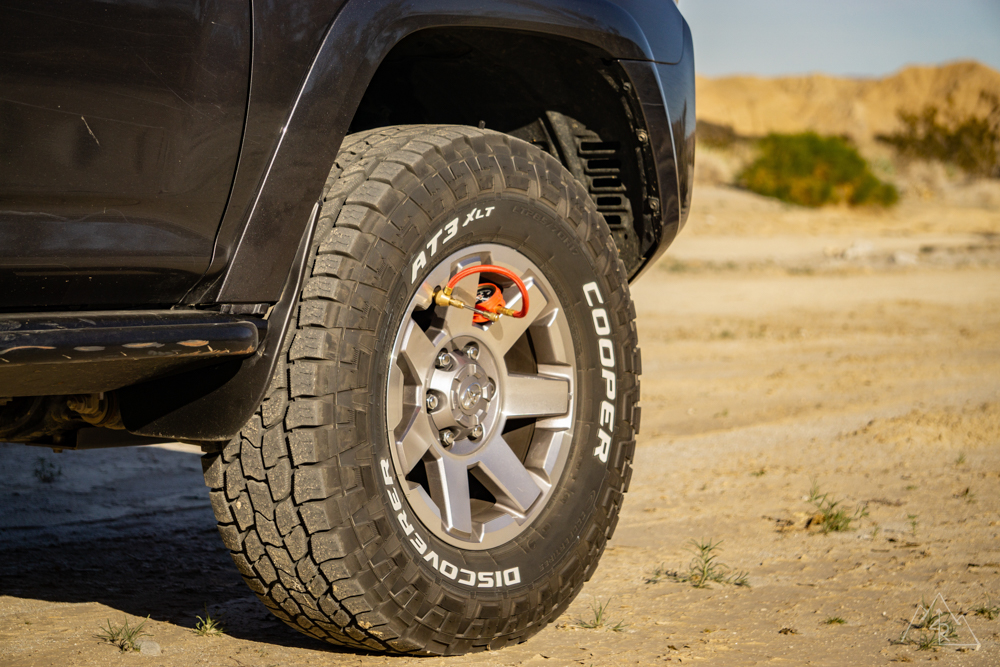 While visiting Southern California we spent a day bouncing around the desert with a good friend and his 4Runner.

This was my first taste of dirt with the new tires, and my first time dropping their air pressure. The ride and traction across the sandy washes was comfortable and confident.

With the tire pressures reduced to 18 psi, the XLT’s conformed well to rocks and allowed plenty of traction through some of the sandier washes. 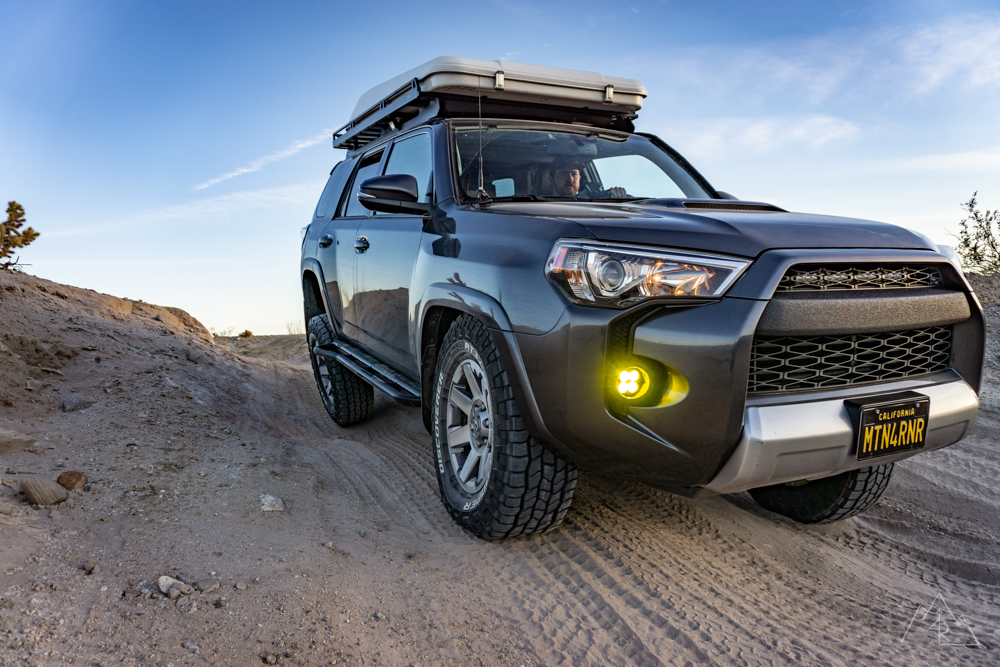 In the Sierras, I drove through a recent winter storm to claim fresh tracks on the local slopes.

Rainy skies on the way up gave way to near white-out conditions on snow-covered roads close to the summit. All the while, the Discoverers performed admirably.

They gave me plenty of confidence while driving and allowed for a surprising level of control when maneuvering and stopping.

Compared to tires in the past, I would have to say that the tread design and performance from the AT3s put them ahead of the pack in these wintery conditions.

Cooper XLT’s versus the S/T Maxx 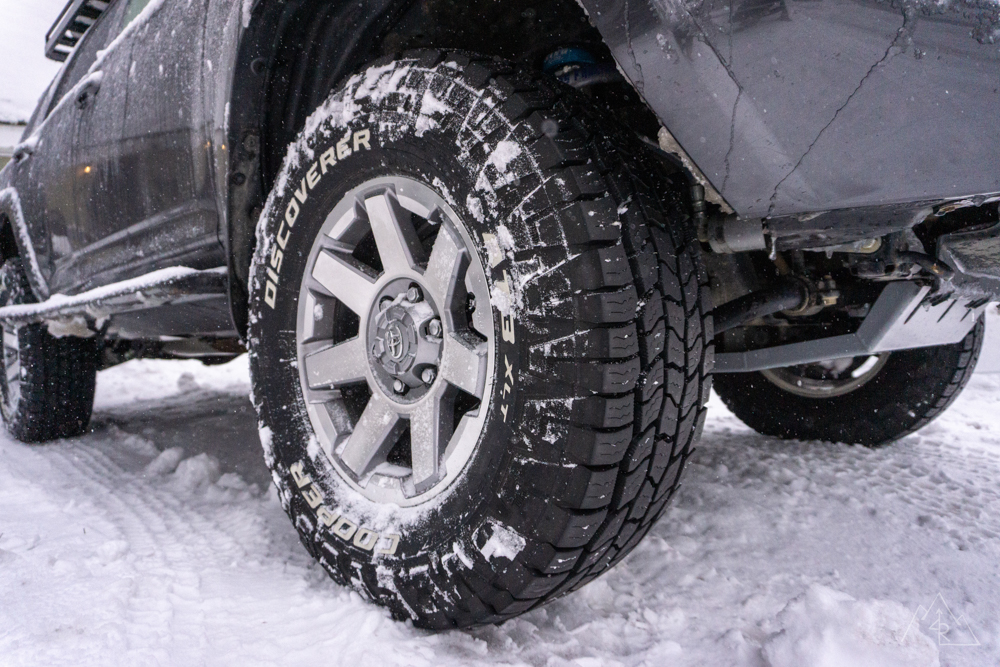 As a quick visual comparison to the S/T Maxx’s that these are replacing, they are about 0.66” taller and 0.4” wider (when new). When placed side by side however, the side difference is quite apparent. Including the tire wear from 55,000 miles of use, the new XLTs are well over an inch taller than the S/T Maxx’s, but the width is similar for both.

One other characteristic to note is that the XLTs do not have the common ‘right pull’ that the S/T Maxx’s can have. As I mentioned in my S/T Maxx review, the ‘right pull’ was never something that really bothered me when I had them, but now that it’s gone I would be lying if I said it wasn’t nice to have the 4Runner want to track straight on its own. 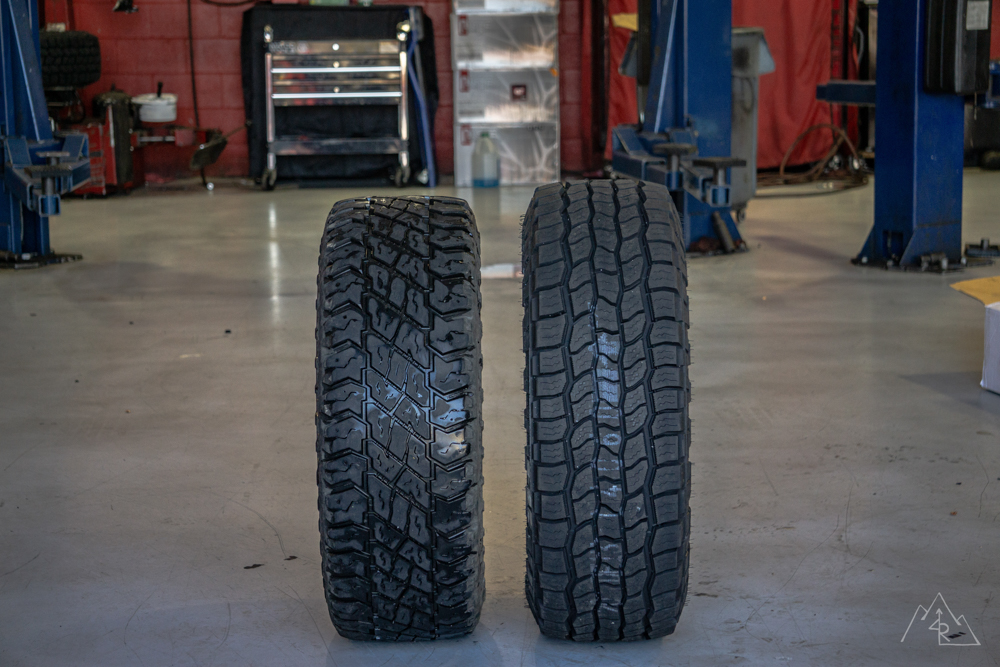 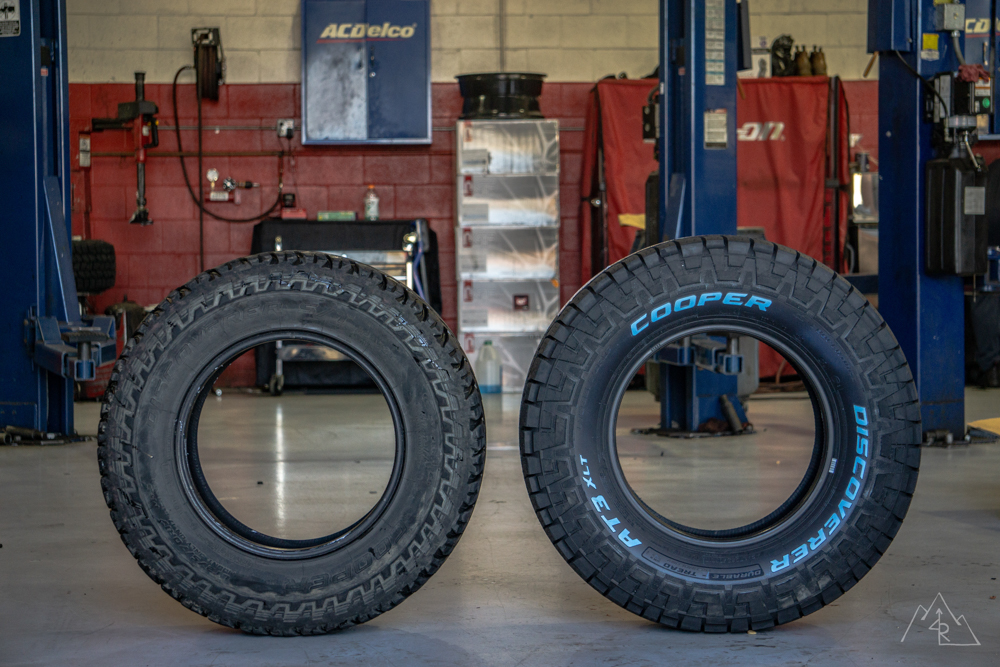 Trail tip: I also included a matching spare tire and wheel for this set of new tires. This gives me a fully functioning spare tire to use if I encounter a flat on the trail, not a smaller sized and weaker tire that comes stock on the 4Runner. The 285 Cooper fits perfectly under the 4Runner, only hanging slightly lower than the stock spare wheel/tire combination. 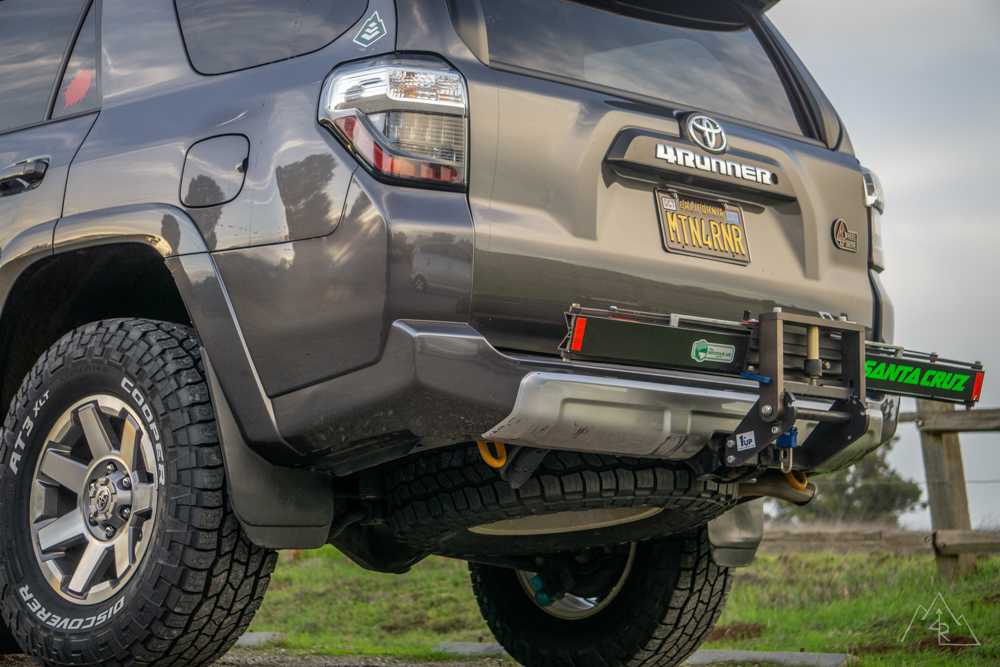 I have many more adventures in store for these Coopers, in many different and demanding environments.

From what I have experienced so far, I think they will prove to be a very good match for the 4Runner across the board.

I will be putting the new AT3 design to the test over the next 10,000 to 15,000 miles so I can report back on my findings here for an upcoming long-term review. 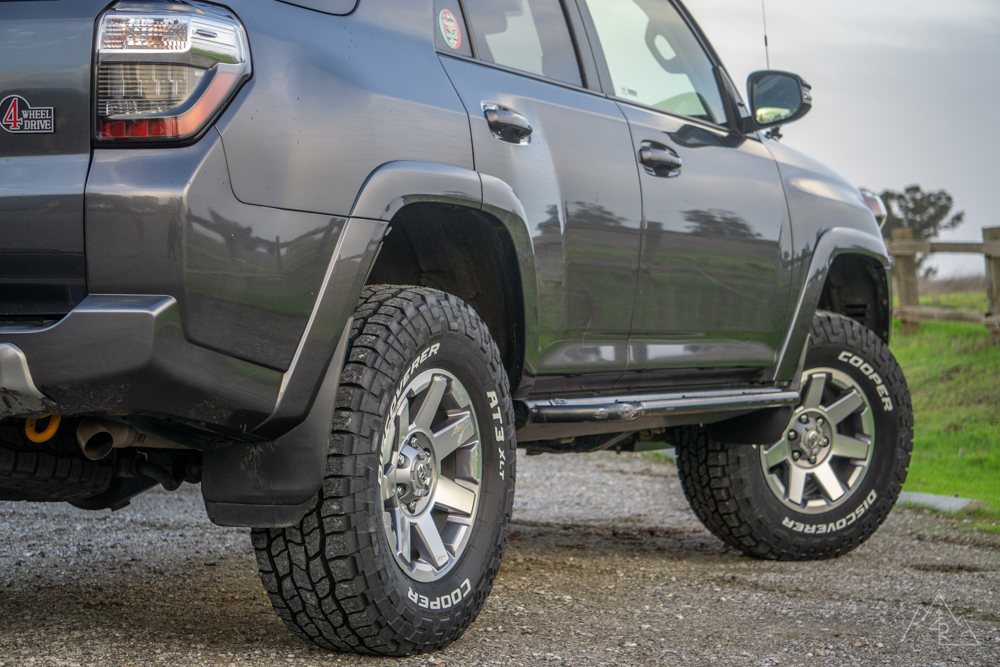 I’m considering getting these in 295/70/17. Will a deflated one fit in stock spare location. I know a 285 will. I’m told a 295 will but that’s just Facebook whatever. Can I have some confirmation?

Thanks for the comparison! I got the ST Maxx to replace the BFG crap-02s that came stock on my Raptor, and overall they are a huge improvement over the K02. They are a tiny bit noiser than I’d like, and I only found out after purchasing that they aren’t ideal for gravel/rocky roads. They are holding up much better than the K02s did, but are still chunking more than I’d like from my high-speed offroad runs. The AT3 XLT is supposedly specifically formulated to combat this.

I think I’ll be switching to the AT3 when I wear out my Maxxes for the reduced noise and hopefully better chunking resistance. I never cared about tire appearance before but it will be hard to give up the badass look of the ST Maxx now tho, hah!

Any update on the long term review?

Hi Mark! I just passed over the 10k mark this week with them, so the long term review is coming very soon! Check back in the next few weeks 🙂

Hi, did you ever do the long term review on the XLTs? I’m in the market and your review is excellent, I’m curious to get the update. Thanks!

What is your AVG MPG with your build right now?

HI, can you please measure the tread width of the xlt? they look a little narrower then the st maxx.
cheers

Whatup gang, i have a set of xt3 xlts going on my tundra tommorow. Had at3s on my 4runner for years. Great tires,great test, great company.

Max, How bad was the power and mileage hit? Corrections to the speedo/odometer?

I about half way through my milage with them before releasing the long-term review! Hopefully a lot of camping miles this summer will help bring me to my total 🙂 // Max

Thank you for the excellent review. Just bought the AT3 XTS for my Land Cruiser. They look great and have great road manners so far.

Looking into these tires and getting some conflicting answers; do these have these tires have the 3 peaks snow rating?

James // I have spoken to Cooper about this directly. They are in the certification process for receiving the 3PMSF (severe snow service-rated) rating. A number of the tire sizes have been certified, and they will all have passed by this summer. They can’t publish that the tires are “three peak rated” until every tire size of a model has been verified, and they are waiting for appropriate conditions to test the remaining sizes. To summarize, technically, no they aren’t. But they are the exact same tires that will be certified in short time. Hope that helps. // Max

I had a set of 275/70R18’s installed yesterday and they are 3PMSF rated. Cooper’s site still doesn’t mention anything thou.

Max- I love the XLT’s, but recognize I would need a lift to go with these instead of the LT’s. What kind of lift are you running? How bad is the rubbing? Thanks for your input!

Jake // You are correct. You’ll need at least a 2″ lift in the front (my opinion) to clear the 285s. I only rub the OEM mudflap on the driver’s side a little, and I am set at about 2.5″ of lift over stock. Hope that helps, I wouldn’t look away from the LTs, and if you want something more aggressive, the ST Maxx comes in a 275/70 that works well with stock height 4Runners! // Max

Steve // I have a 2.5″ lift on my 4Runner, and I still have minor rubbing on the driver’s side against the mud flap. You’ll want to check out Cooper’s AT3 LT because they offer a 275/70R17 which is about as large as you can go without a lift. For more on tire fitment, click here // Max

Thanks for the review. My Cooper AT3’s have about 1 more summer left on them before I’ll be looking to replace them. I have a 2.5″ lift on my 4Runner, and am running stock rims. Wondering if you can comment on any height or width issues you are having with the 285/70’s vs the stock 265/70 size which I’m running. Thanks.

Hi Colin // I had 275/70’s before these and so far with stock wheels and a 2.5″…ish… lift, I haven’t had any problems with rubbing so far with the 285/70’s. At least nothing major, just a little rub on the mud flap, but not close to the body mount or anything else critical. Good luck! // Max

Thanks for sharing your experience Max. I was very excited when the XLT was introduced, and wanted to go for a 275, however the XLT only comes in 285. I think I’ll follow your lead and go for the 285’s next time!

Sounds like a great plan! So far they have worked out pretty well. Good luck!