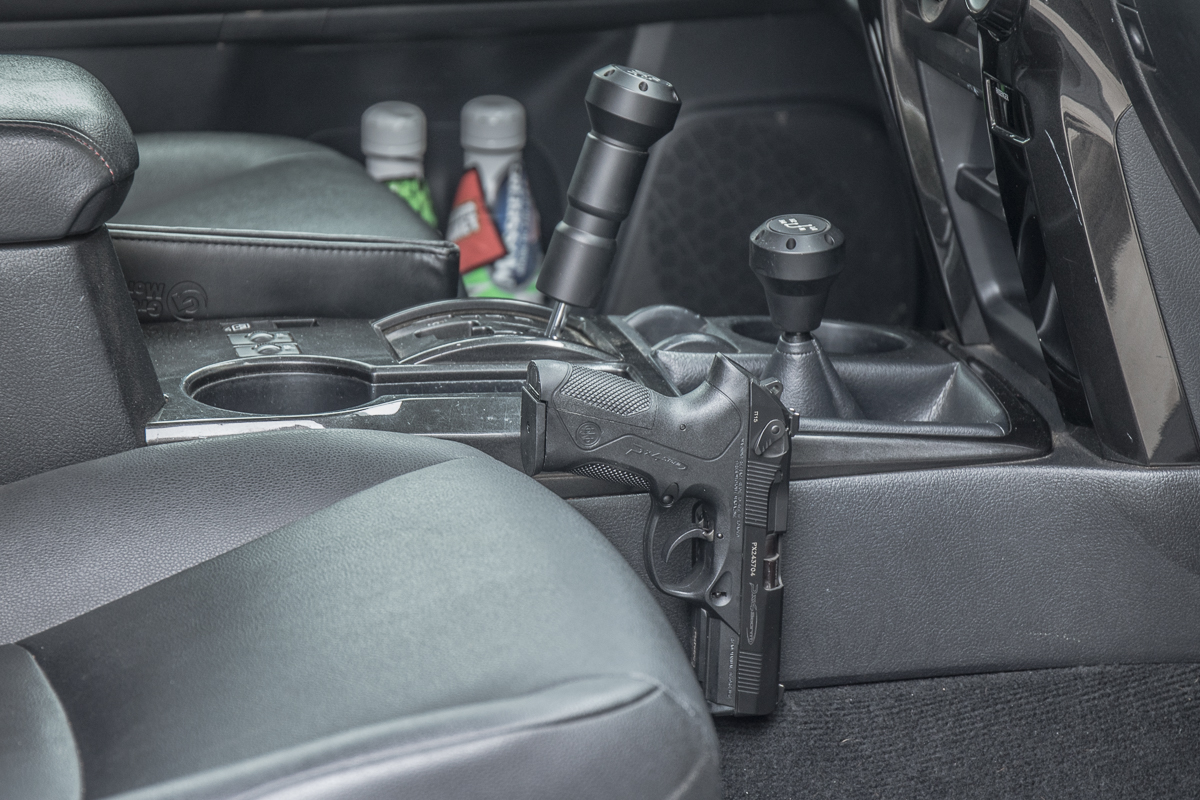 I have wanted a home for my Berretta PX4 up front in the cabin for a while. I have always carried my gun or guns with me when I head out but there have been a few interactions on the trail, that would have given me peace of mind knowing my Berretta or Glock was close by.

Whether you are on a trail or have a CCW (Concealed Carry Weapons) permit to carry a concealed weapon, having a dedicated spot in the 4Runner is nice. If you carry a handgun, you have plenty of options on where to mount.

You have plenty of options for where to mount the magnet. It really depends on the size gun you have. If you have a full-size Sig 1911 .45, mounting may be limited compared to a compact Smith & Wesson M&P 40C. I will end up getting my CCW and probably buy a Sig P320 Nitron Subcompact or something similar. Then, I can set up a mount in the glovebox or center console as a permanent solution for a CCW.

For now, I just wanted a place to drop the Berretta 9mm while I am out on the trail.

Quick Story on why it’s important to carry

My girl and I were on the Blackwood canyon trail near Homewood Mountain in South Lake Tahoe. My girlfriend was pregnant at the time and it was her first time on a trail. She didn’t know what to expect. I knew it was going to be a long trail but didn’t know what to expect either. Looking back, maybe I was the dumb shit for bringing my girl into wooded forest miles from civilization. Anyway, back to the story.

After a long day and nearing the end of the trail, we came around a corner and boom, we saw the scariest looking human we have ever seen staring directly at us. This man was about 10′ from the 4Runner just staring at us. His eyes were wide open along with his jaw dropped and mouth opened (picture the painting “scream”). His face was not normal. Something straight out of the movie, the hills have eyes. This shit was creepy. We were driving over large cobblestone rocks, not driving more than 2-3 mph so the moment lasted forever. What was probably 2 minutes felt like an eternity. My girl and I looked at each other and thought, yeah… today, we die. Not once did this guy blink, just stared at us, head turning with the direction of the 4Runner. The only thing I was thinking was WHY THE FUCK IS MY GUN IN THE TRUNK!

Nothing happened, but damn it would have been nice having my finger on a trigger.

Where I mounted the Keeper MG Magnet Mount for Handguns 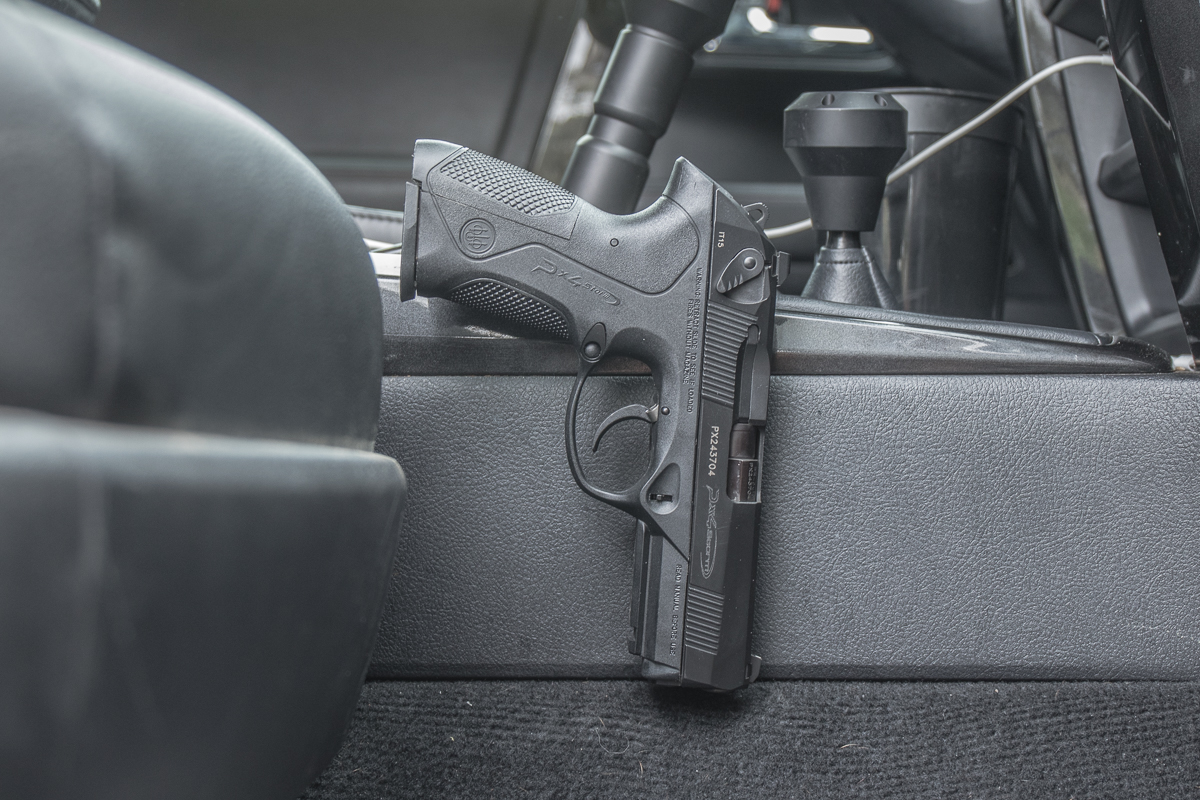 I placed the Keeper Magnet Mount on the passenger side of the 4Runner. I thought about it long and hard. I sat in both seats and thought about the most logical place that a gun should be in the cabin. Under the steering wheel seemed like a good place to mount a gun, but there was no 4″ flat surface to mount the keeper magnet. Also, I did not want my massive rain boots to kick off the gun getting in and out of the 4Runner.

Other shots of the Keeper MG Magnet Handgun Mount

The Mount Alone – It came with black screws, but I didn’t like them. They looked like wood screws so I got something a little shorter with tighter threads. 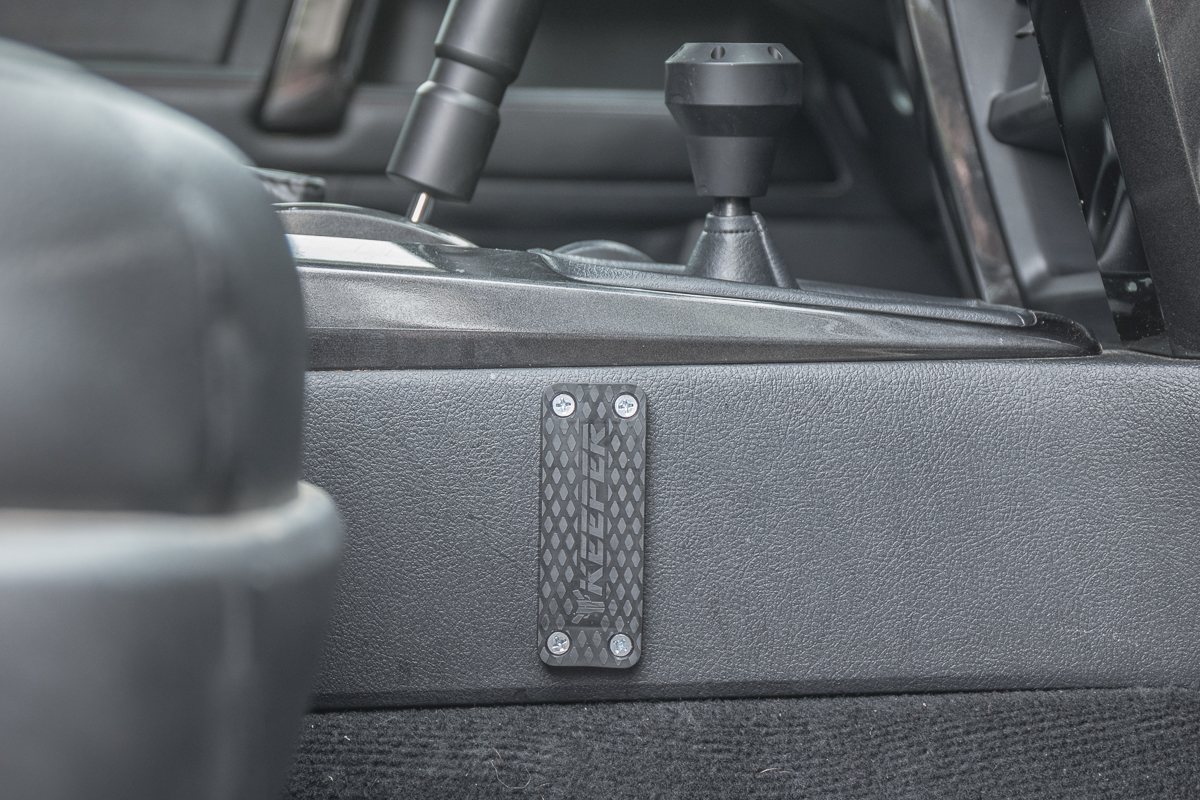 The Passenger Seat almost all the way forward. 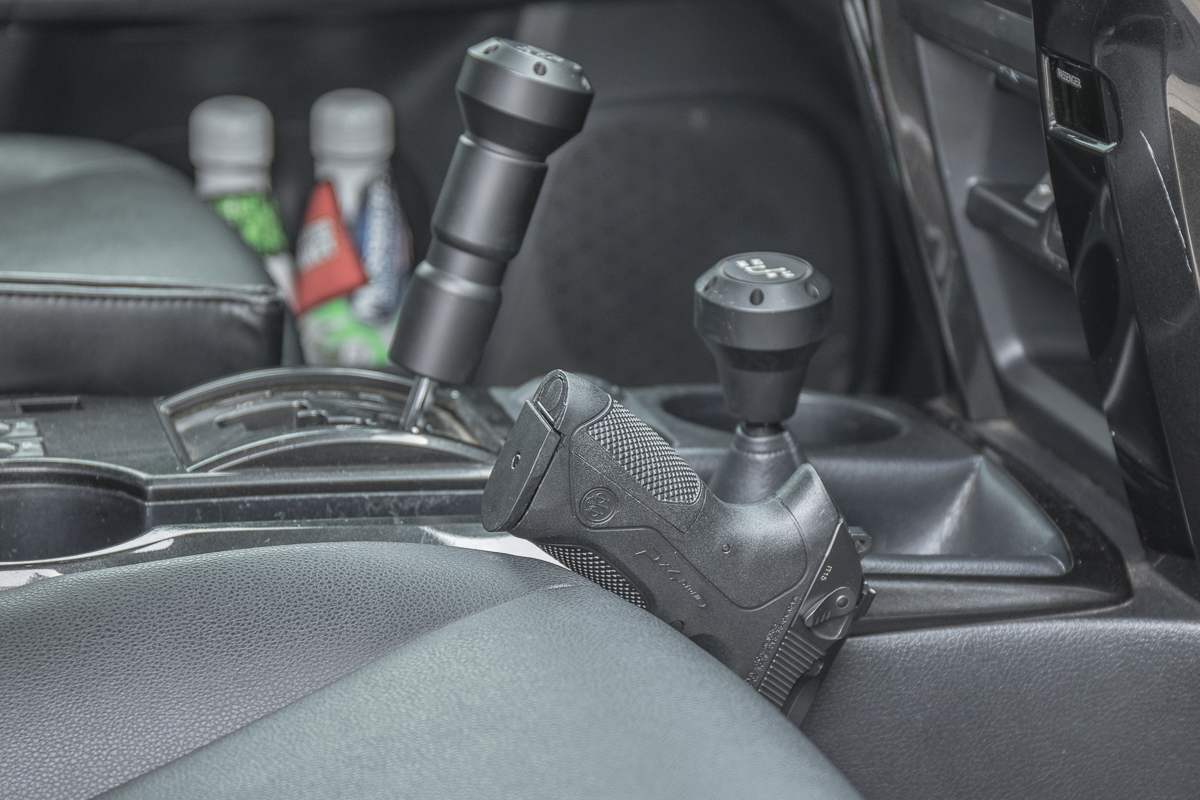 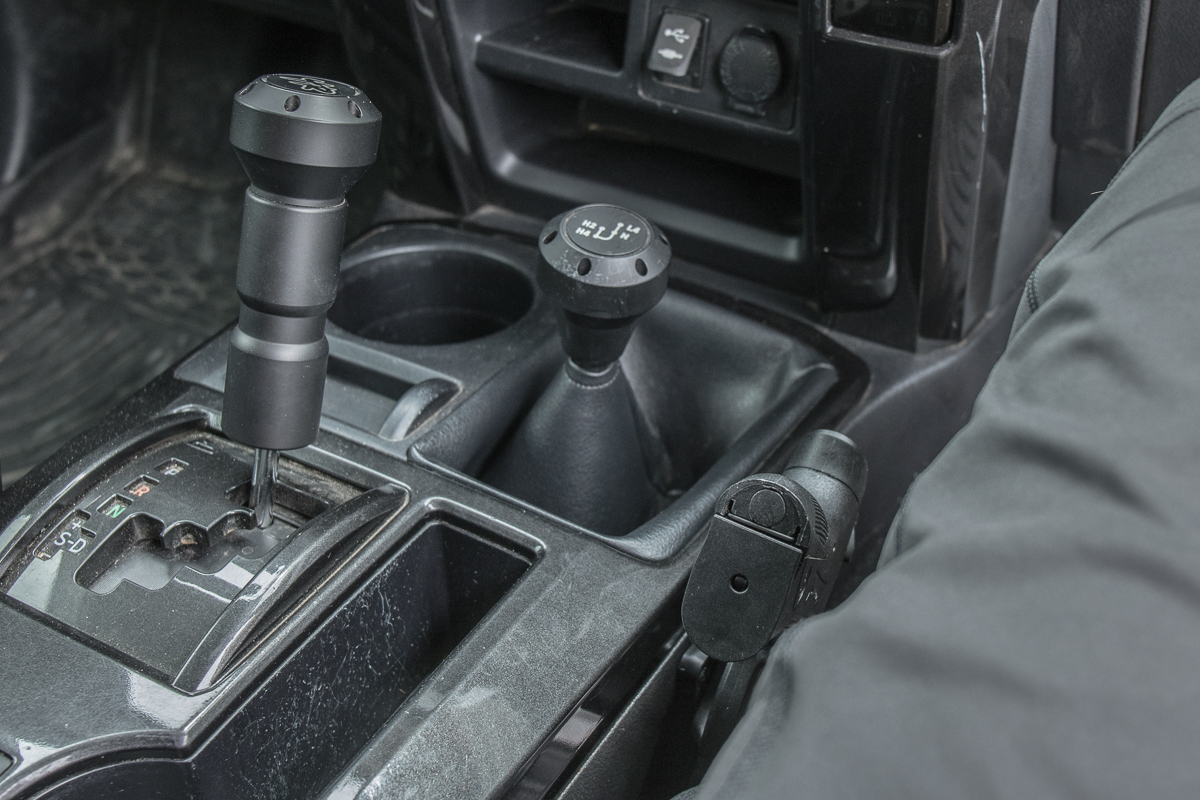 General Disclaimer: Don’t be an idiot and carry your gun in broad daylight and leave it for anyone and everyone to see. This will likely attract a call to unwanted authorities. There is no reason to leave your gun in your car unattended. This mount is recommended for off-road use and as a solution to mount your pistol in a holster if you do not want it on your hip while you are driving. When you park, do not leave your gun mounted in your car open for the public to bitch about. Also, obey your local gun laws or just move to Nevada.

I use a velco covered universal holster that came with a range bag I picked up. It latches right to the carpeted area on the drivers side next to my right leg. I have a .38 snubbie holstered in it with the barrel pointing towards the front of the vehicle and the grips up (essentially it’s holstered upside down).
The good thing is it’s unnoticeable to passengers or anyone outside of my vehicle and can still be drawn fairly quickly. Oh yeah, and it’s cheap!

Just use a Safariland QLS plate or G-Code RTI wheel. Allows you to mount the gun in the holster, plus easily transition back to your belt. Plus far more secure than magnets.

Honest opinion.
A holster would be ideal so that the trigger was guarded at all times but it also depends on the situation. If I’m alone and know the status of my firearm. I’d be fine with it. Locked n loaded. You could also go with nothing chambered for a little extra safety. If I’m with people that don’t know firearms, mine will probably not be next to their leg. Lol
Bottom line if you’re a responsible gun owner and follow the basic rules of handling a firearm there should be no issue. I like this mounting option but I also see the side of people who would prefer a holster.
Great write up brenan! Love the site!

Extremely unsafe.
I have these mounts, but only use them in my apt(as a single guy). I will not mount a gun in my truck without a trigger guard. I carry cocked and locked/chambered no safety. The best option for mounting a gun is to mount a holster. You can buy mounting hardware that will allow room to grab your firearm grip at Home Depot.
My 2 cents

Ben, thanks for your 2 cents. We mentioned the holster at the end of the post, not sure if you caught that. Also, not sure if you read the disclaimer at the end but we are talking about common sense here. I am not packing a pistol off safety with my family at Disney Land. We are talking about being the middle of nowhere on a trail. I was raised around guns, hunted with my family for years. My father, Uncle, and crew preached safety. What exactly is unsafe about being in your truck alone in the middle of nowhere with a loaded gun on the passenger side of your vehicle on a Magnet rated for 35lbs? Honest question. Also, what “hardware” do you recommend buying from Home Depot?