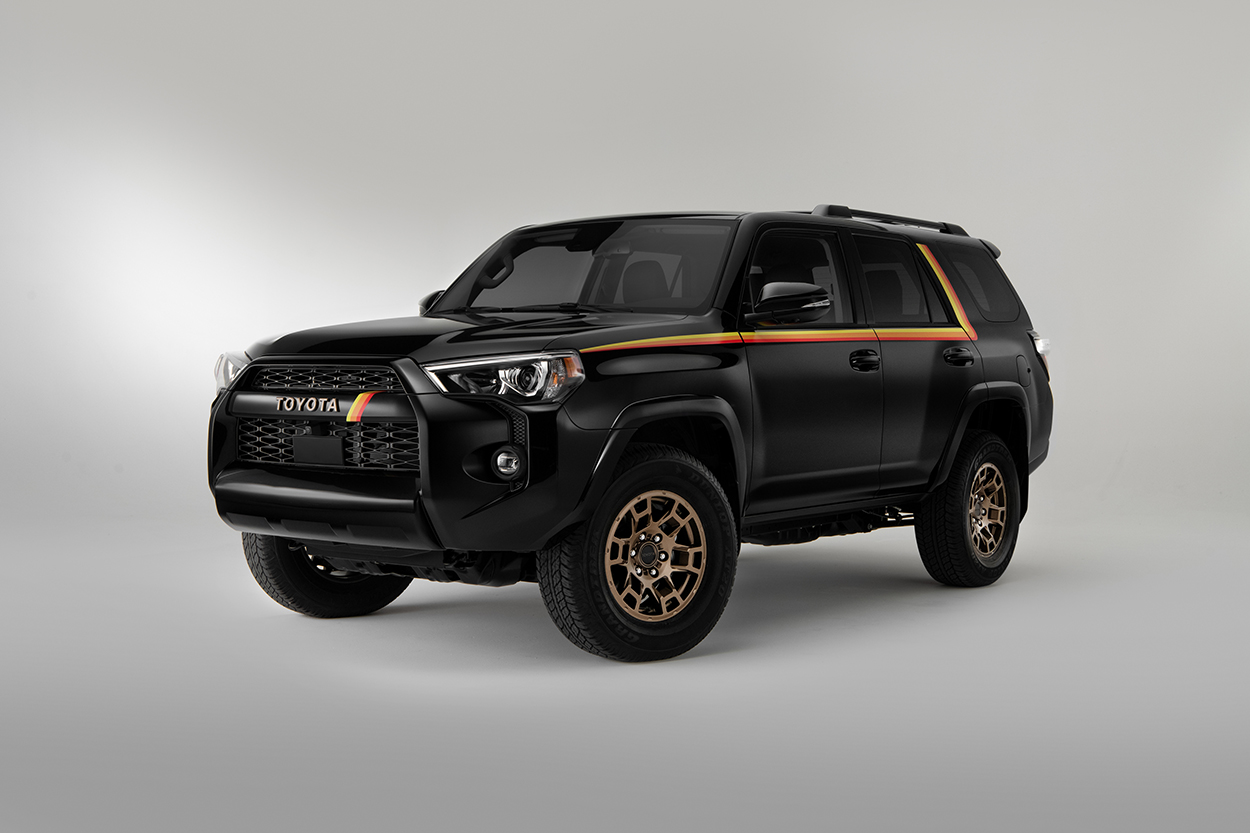 The 4Runner’s iconic nameplate turns the “big four-0.” with the upcoming 2023 model year. To celebrate this, Toyota is offering an exclusive 2023 4Runner 40th Anniversary Special Edition. This Special Editon isn’t the 6th Gen that we have all been patiently waiting for, sadly.

Instead, the 5th Gen 4Runner lives on for one more year. Of the 40 yrs that the 4Runner has been in production, the 5th Gen has been around for 13 years of it. That makes it one of the most iconic generations in the 4Runner family.

The news of the 40th Anniversary Edition 4Runner isn’t the only information that Toyota gave us about the aging 5th Gen today though. Toyota also spilled the beans on the 2023 TRD Pro’s exclusive color as well this morning and boy is it bright and bold!

The 5th Gen 4Runner will go into its 13th year of production this Summer. This makes us all wonder, will we ever see a 6th Gen 4Runner from Toyota?

The Last Of Its Generation? 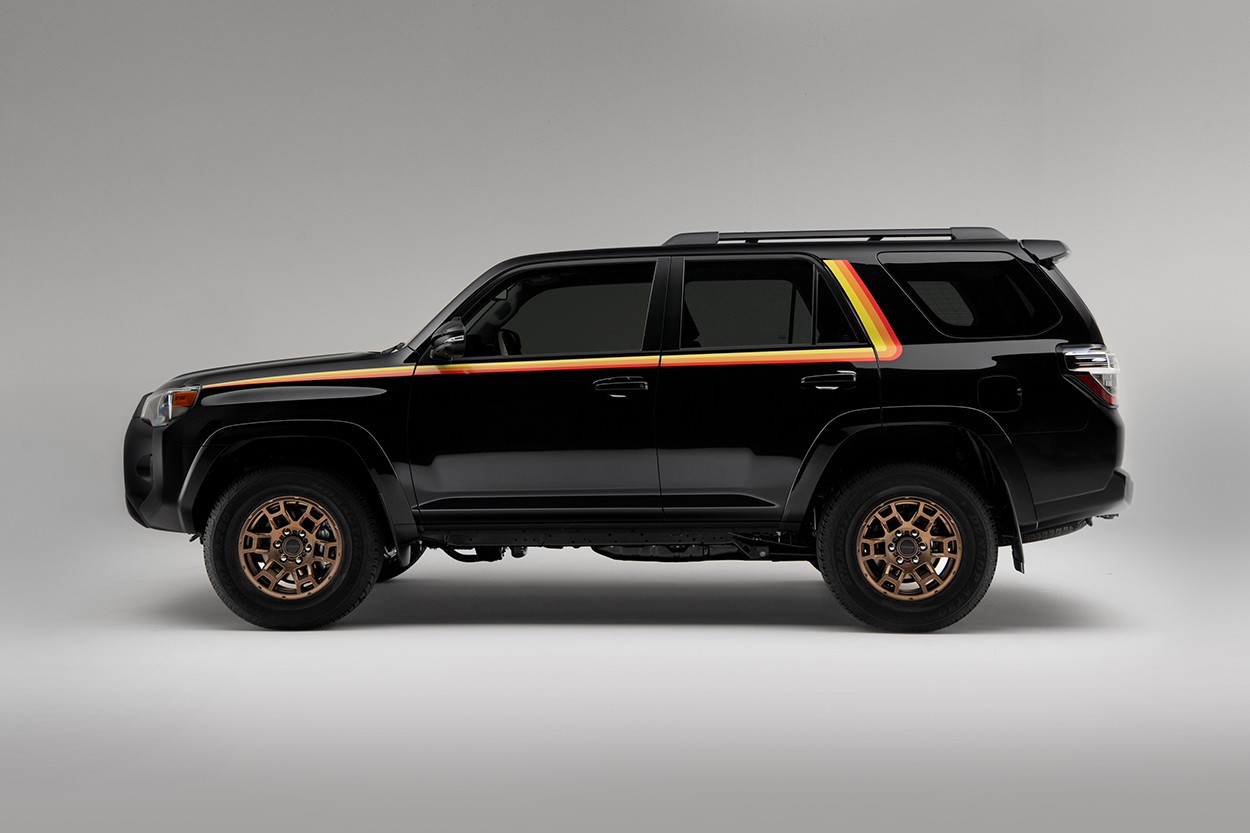 The 2023 Toyota 4Runner 40th Anniversary Special Edition is based on the SR5 Premium grade and will be available in three colors: Super White, Midnight Black Metallic, and Barcelona Red Metallic (which is an interesting choice in my opinion).

I honestly wished that this package was based on the TRD-ORP rather than the SR5 just so it would have all the extra off-road bells and whistles. The SR5 package, however, is Toyota’s #1 selling trim level on the 4Runner over the last 40 years. With that, I guess it is fitting that the Anniversary Edition is based on the SR5. 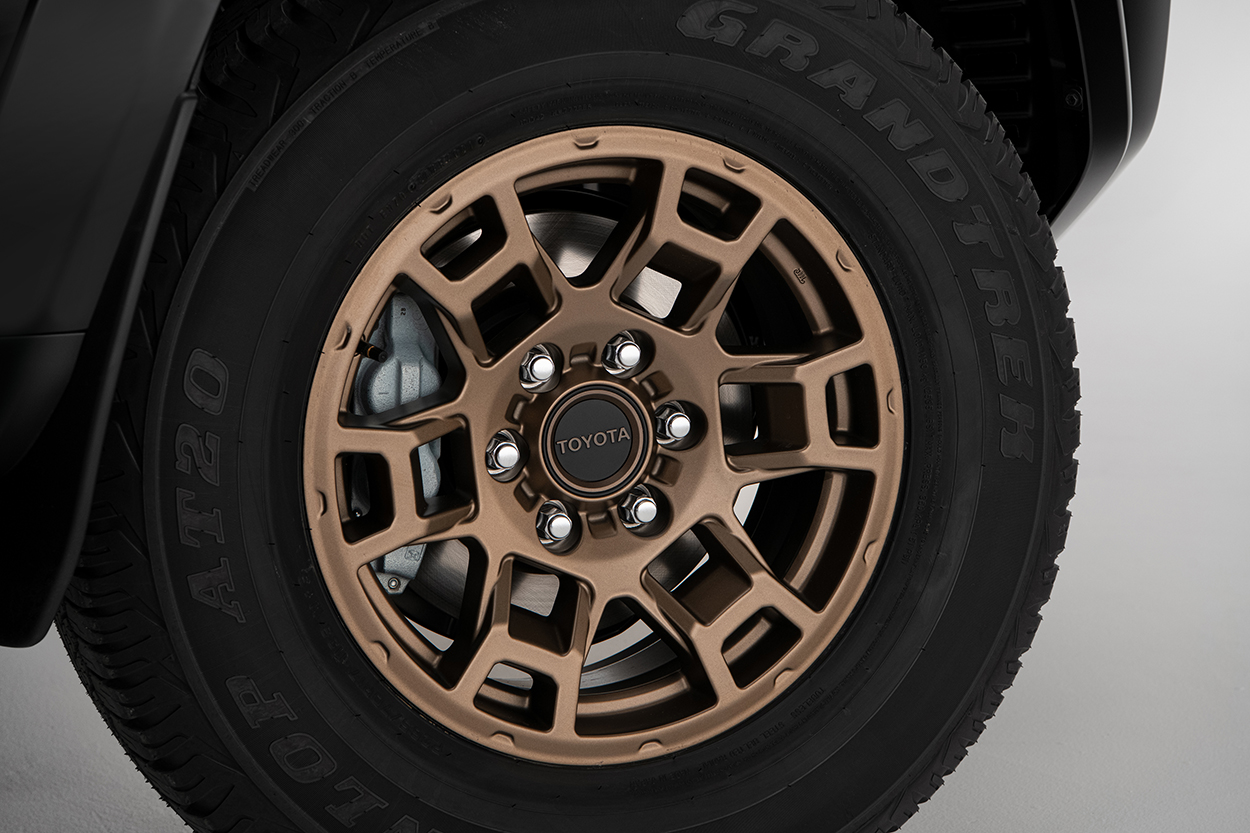 These wheels are similar to the TRD Pro’s wheels but are matte bronze rather than black. They look so dang good! 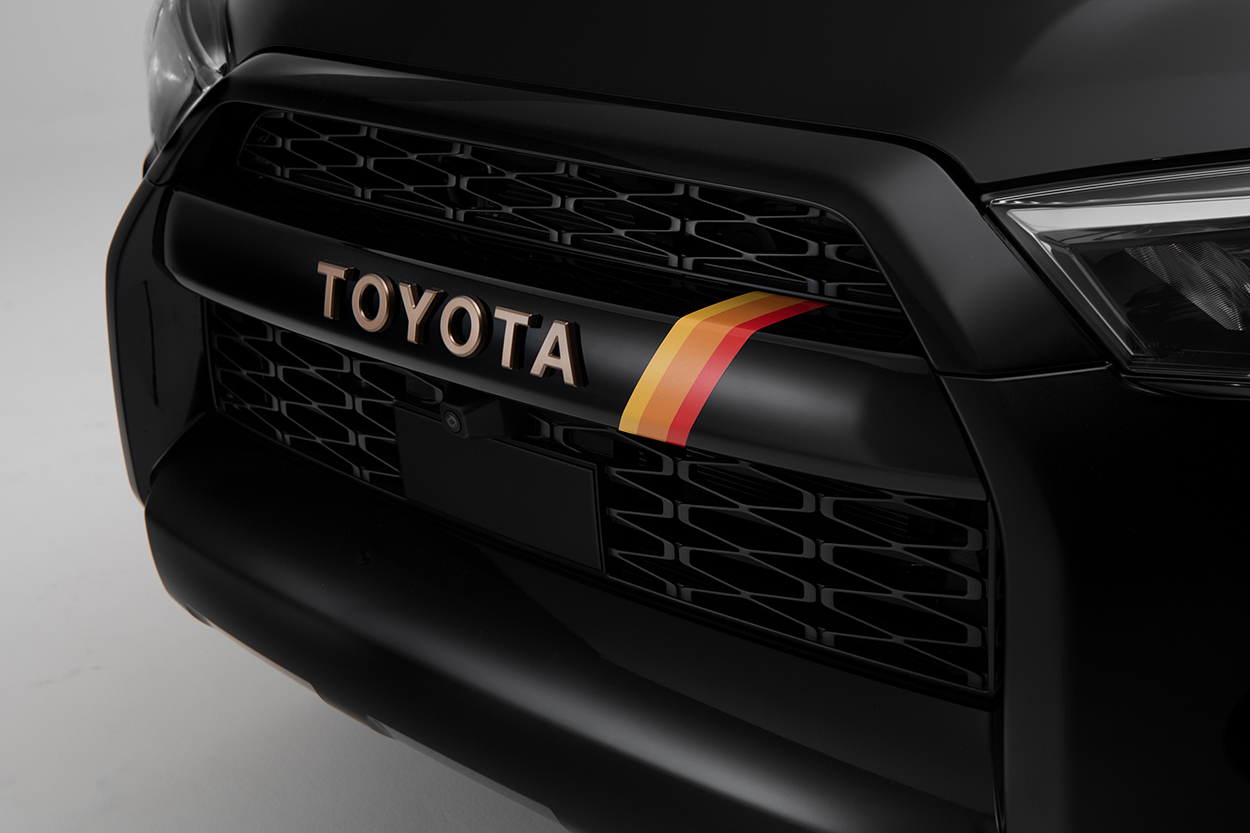 This grille will be completely color-matched so even though it appears to look just like the TRD Pro grille here, it will look very different on the Super White and Barcelona Red-colored 40th Anniversary Editions.

I feel that white is going to be the most popular color for this Special Edition. 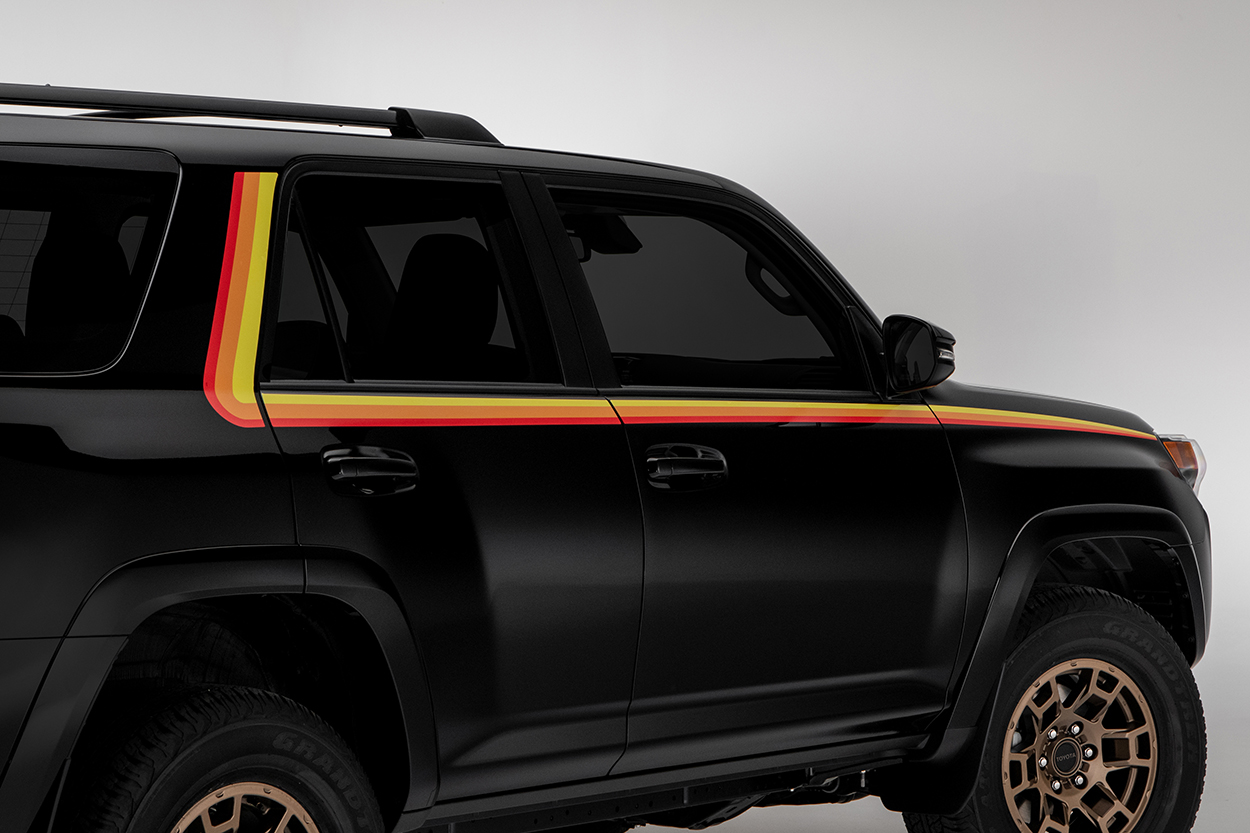 The boldest characteristic of this Special Edition is definitely the heritage graphics package created especially for this 40th-anniversary model.

The first 4Runner was built on the Toyota pickup platform. That was what founded the heritage of Toyota’s illustrious success in off-road racing.

As a nod to those early racers, the 4Runner 40th Anniversary Edition will be wearing some very cool, retro-inspired body graphics. The SR5 badge is also removed on the C pillar, giving this 4Runner a very clean look. 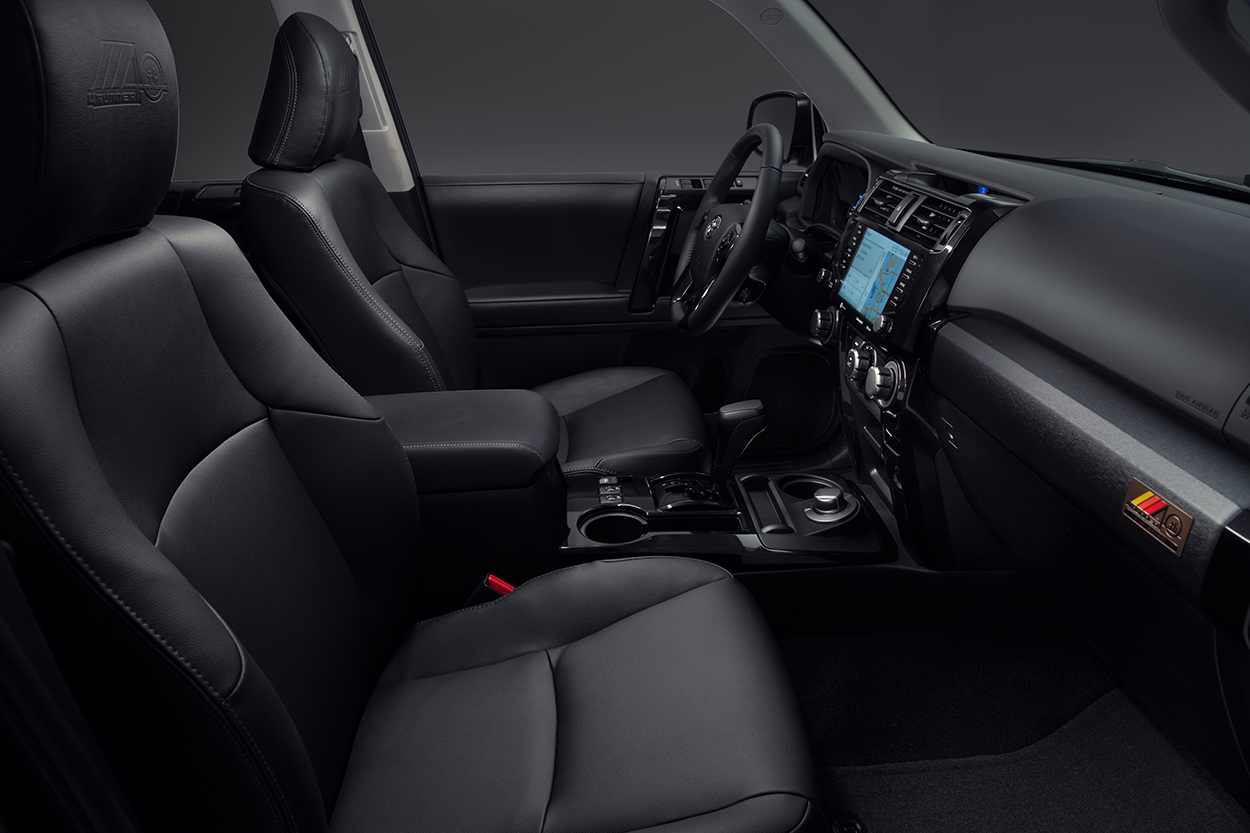 On the inside, the 4Runner 40th Anniversary Special Edition gets exclusive badging on the center console. It also features a bronze-colored cross-stitch shift knob and seat stitching, 40th Anniversary floormats, and a 40th Anniversary logo embroidered in the SofTex-trimmed seats. 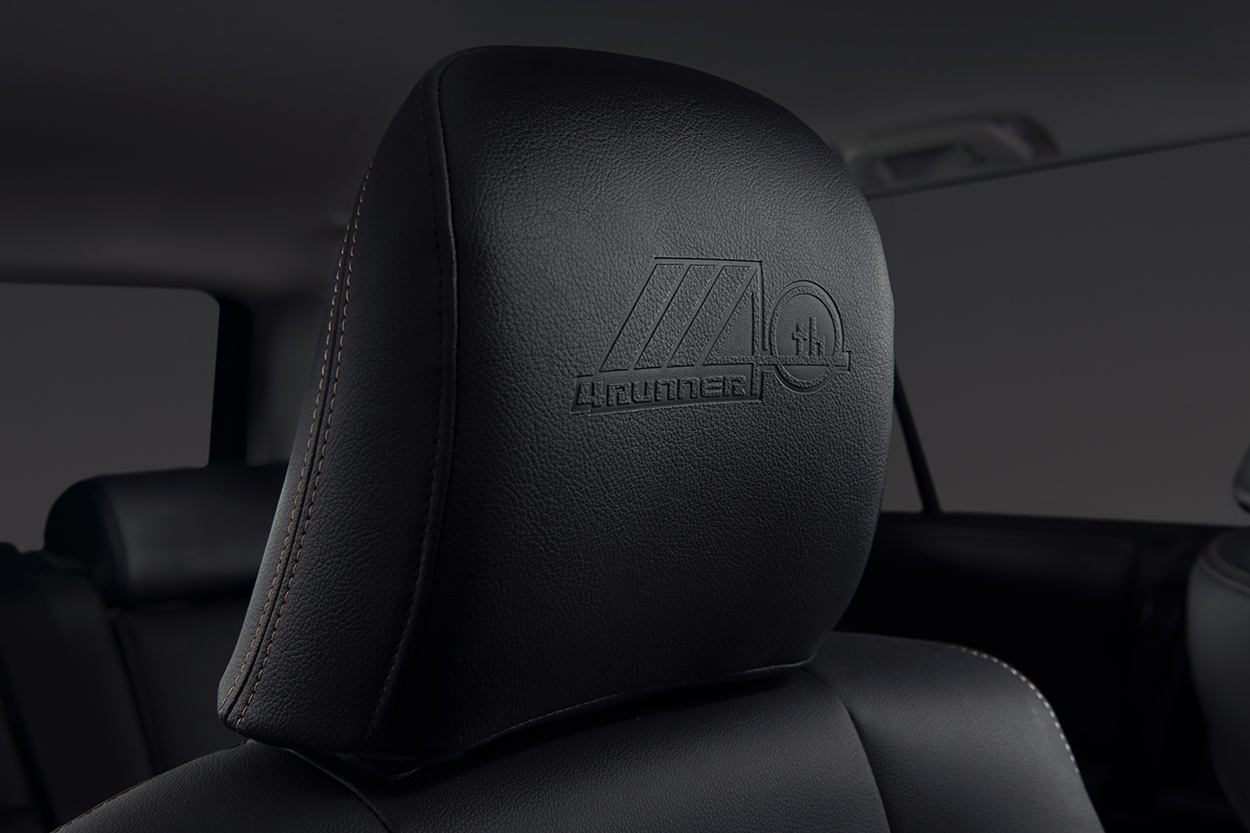 Since this is based on the SR5 Premium, heated seats and a power moonroof will come standard. 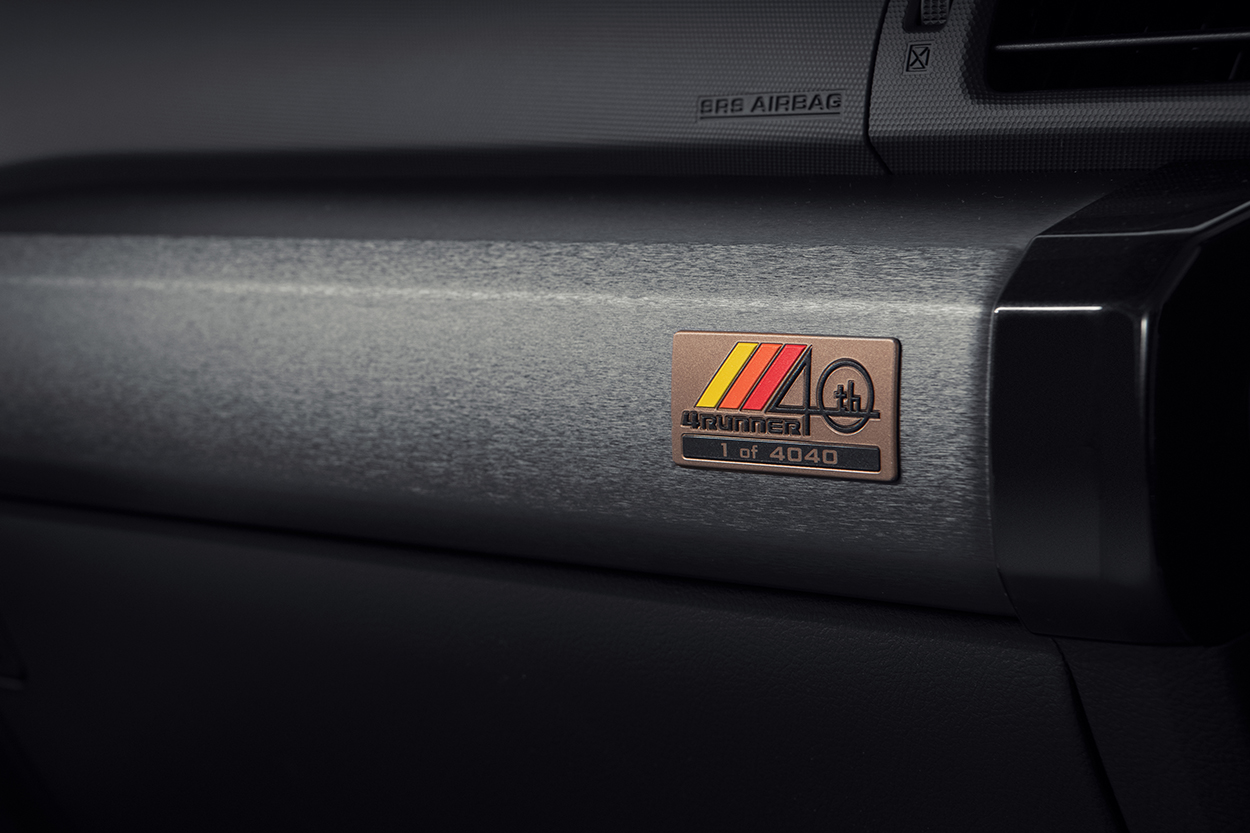 This badge is so freaking awesome, we definitely need a patch like this! 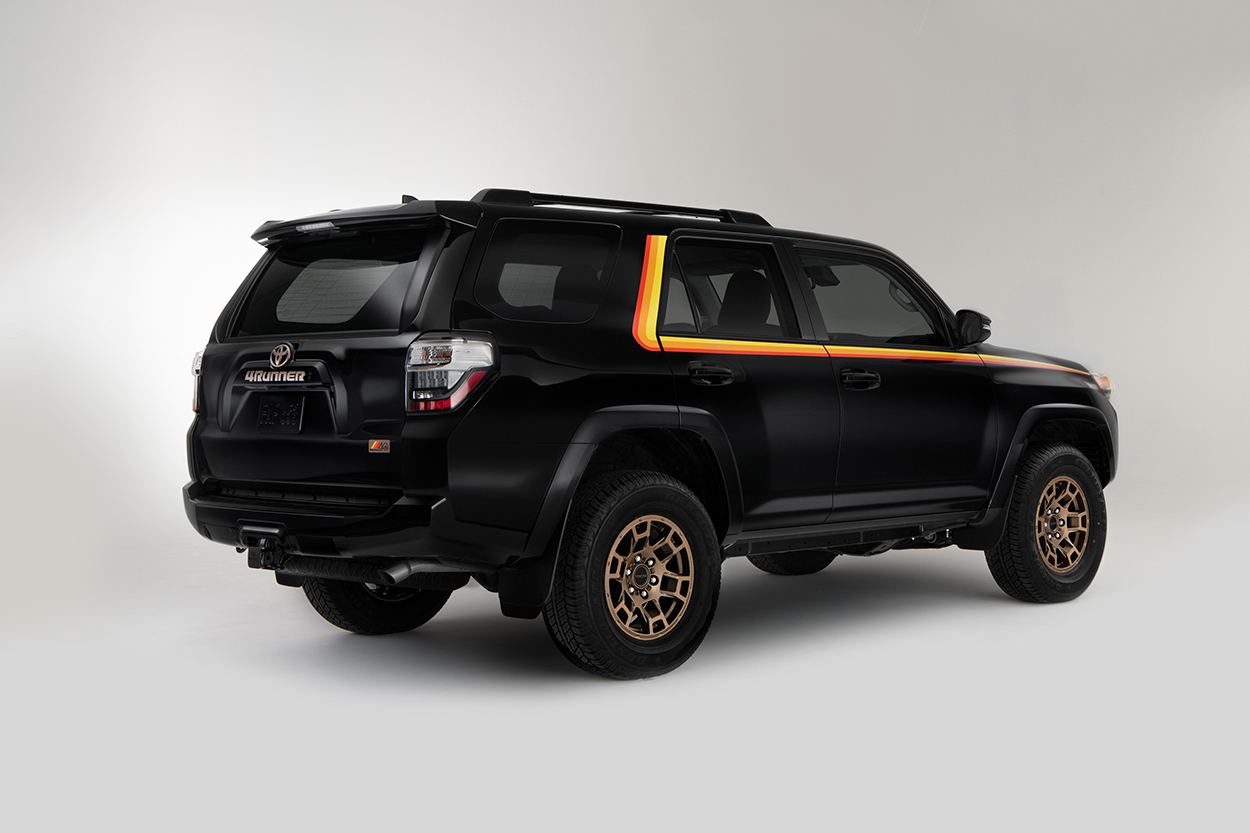 Toyota will make 4,040 of these 40th-anniversary Special Editions for the U.S. market. That will make these just as rare as their TRD Pro siblings.

Speaking of the TRD Pro, remember how I said it was bright and bold again? Let’s check it out! 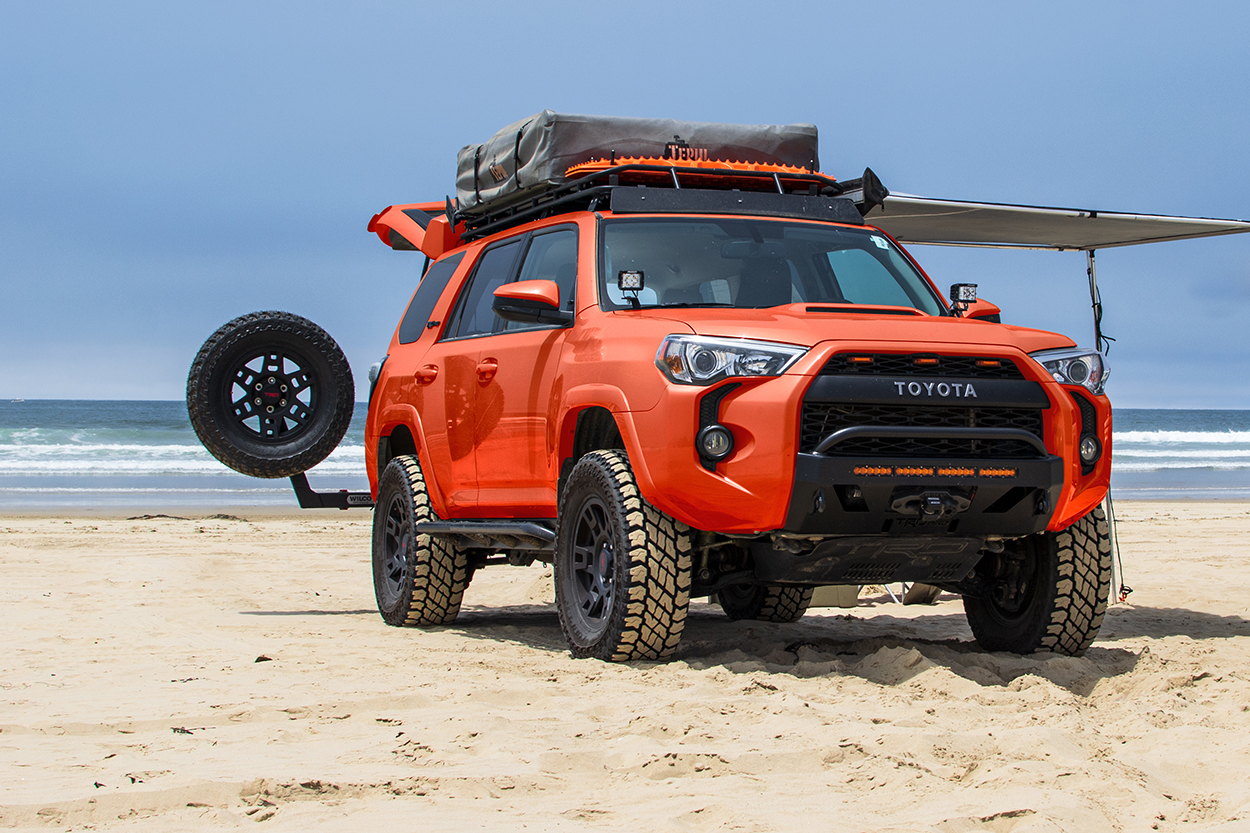 Toyota has now officially announced that the 2023 4Runner TRD Pro exclusive color will be Solar Octane.

We all kind of saw this coming as Toyota recently revealed that the 2023 Tundra, Tacoma, and Sequoia TRD Pros were getting this same exclusive color.

The 2023 TRD Pro 4Runner will also be available in Midnight Black, Super White, and Magnetic Gray Metallic. No changes other than color come to the TRD Pro for the 2023 model year. 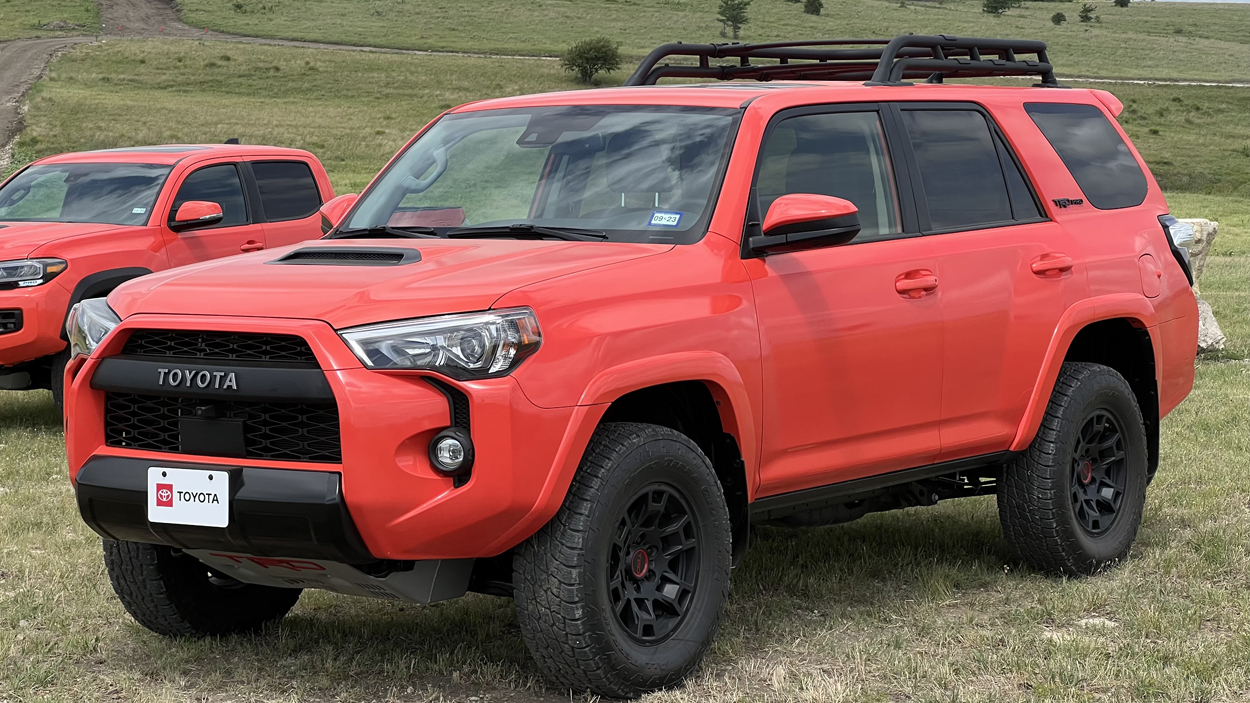 So what do you all think of the 40th Anniversary Special Edition 4Runner? Like I said at the beginning of this article, I really wished that this was based on the TRD-ORP package.

If it was, I would most likely be selling my 2018 Cavalry Blue TRD Pro to get it. Why? Well, I truly feel that this is the last year of the 5th Gen 4Runner. I’d love to be part of that history with a 1 of 4040 Special Edition rig with all the off-road goodies that my TRD Pro has. I am still tempted to do this, but we will just have to wait and see.

I can’t wait until I am FINALLY writing about the 6th Gen 4Runner for you all. Until then, let’s just enjoy the 5th Gen for one more year (hopefully). Don’t get me wrong, the 5th Gen is great and we have tons of aftermarket support thanks to its nearly 13-year run. However, we still want that new-new Toyota! We’ve waited long enough.

What do you hope that Toyota does for the 6th Gen 4Runner? Let us know in the comments below.

Thanks for reading guys!

Eliminated the Landcruiser and punted on the gen 6. Disappointing.

I kind-of think the first pic in the article is the 2015 orange. Not Solar Octane.

Does anyone know who makes that front bumper on the Solar Octane? Looks fantastic!

This looks like an earlier version of the C4 Fabrication Lo Pro bumper, with a custom TRD Pro logo cutout at the bottom.

Clearly Toyota isn’t ready to launch the 6th Gen. Very frustrating to those of us with 8-10 year old 5th Gens ready for an upgrade – but I understand why they did something special for the 40th Anniversary. That said, it could have been better. Much better. Even the revived trail edition came with a cool ice chest. Those wheels are pretty sick though

I’m all for this! Buoys the value of my 2021, plus we still keep a Japanese made product with a proven motor and overall reliability.

Well, I…hope it has a good personality.

Toyota missed the mark here. Stickers and a badge for a price premium? At least with the TRD Pro or ORP we get the more off-road shops we all want. No one asked for this. The community as a whole is asking for a refresh to a now far outdated model.

It’s a proven model. I think many will be wishing for this 5th gen after the refresh comes out and they put some crap engine in it for the sake of environmental social justice garbage. I agree 1000 percent stickers doesn’t do it justice and it should have been at least been on a TRD off road base. I’m in line for a 23 pro as those 4040 special editions will be rarer than the tooth fairy!

And not to mention the likely markups associated with them.