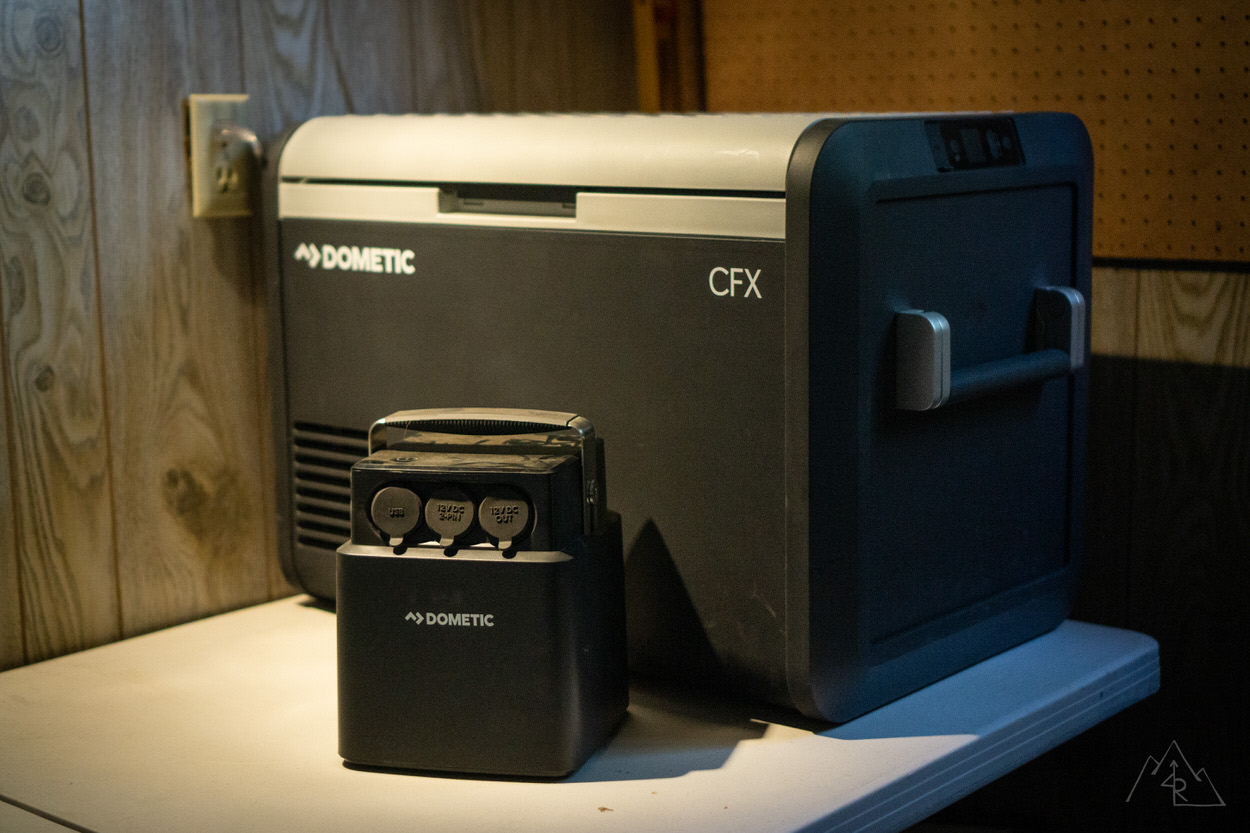 Portable refrigerators have become more popular than ever in the overland and off-road markets.

They have the important task to keep food and beverages from expiring while on the longest or shortest of adventures. An unfortunate side effect to these fridges is that wiring and vehicle battery upgrades are almost mandatory to accommodate them. A stock, non-deep cycle battery will fail when paired with constant power draws from a portable fridge.

To upgrade to an AGM battery, and install a properly sized and fused wiring system can easily exceed $500. Throw in a wired controller for a solar panel and you’ll be closer to a grand in the hole. But before you dive into vehicle modifications, there’s another solution you should know about and it comes straight from Dometic, one of the leading companies in the portable fridge market.

The PB40 Portable Fridge from Dometic is a 40 amp-hour portable battery pack designed to work in perfect harmony with their CFX3 line, and it packs a punch. 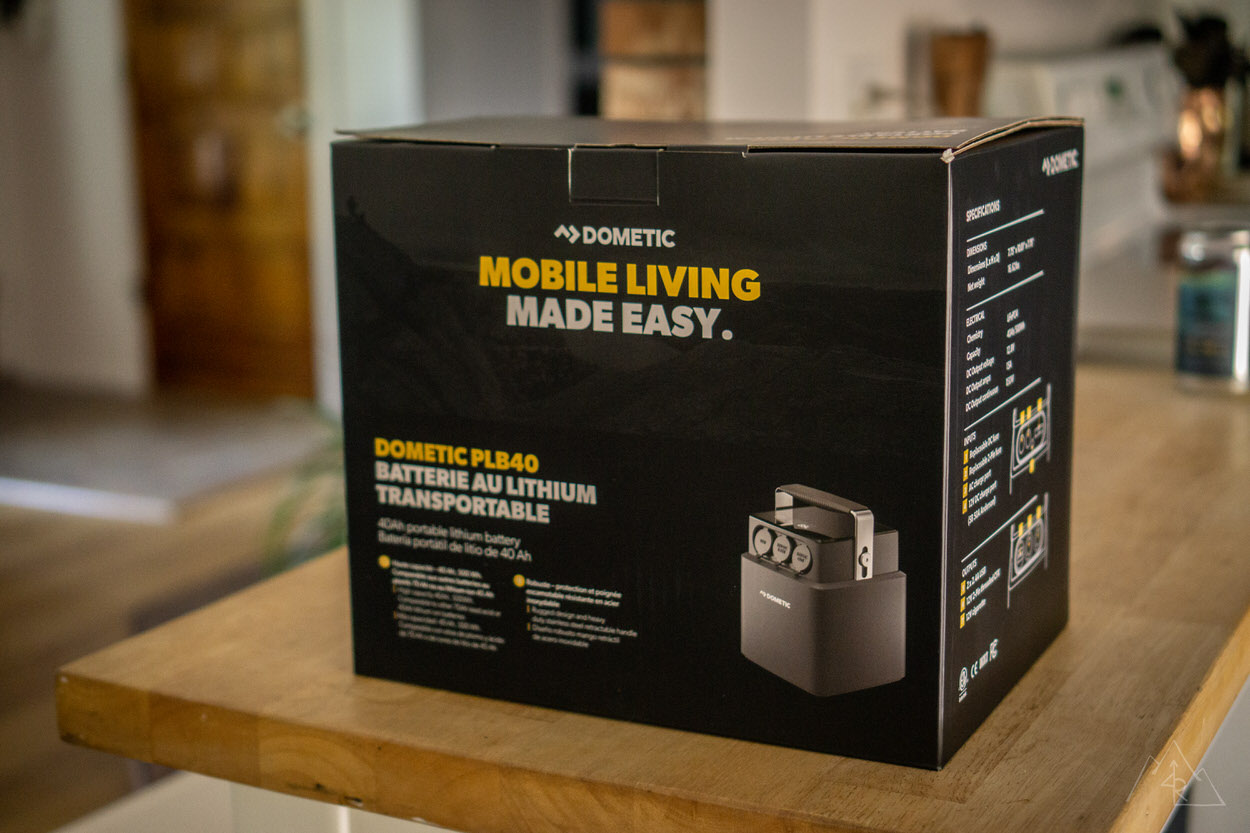 Out of the box, the PLB40 has a quality heft to it, but not as much as you might expect.

See, most of the time when you lift a car battery you need to put your back into it as they typically weigh upwards of 50 pounds. Thanks to Lithium Iron Phosphate technology, that expectation disappears when you grab the sliding handle and lift. Once you have a good grip on it, the square footprint and size of the battery make it easy to handle in and around your 4Runner. 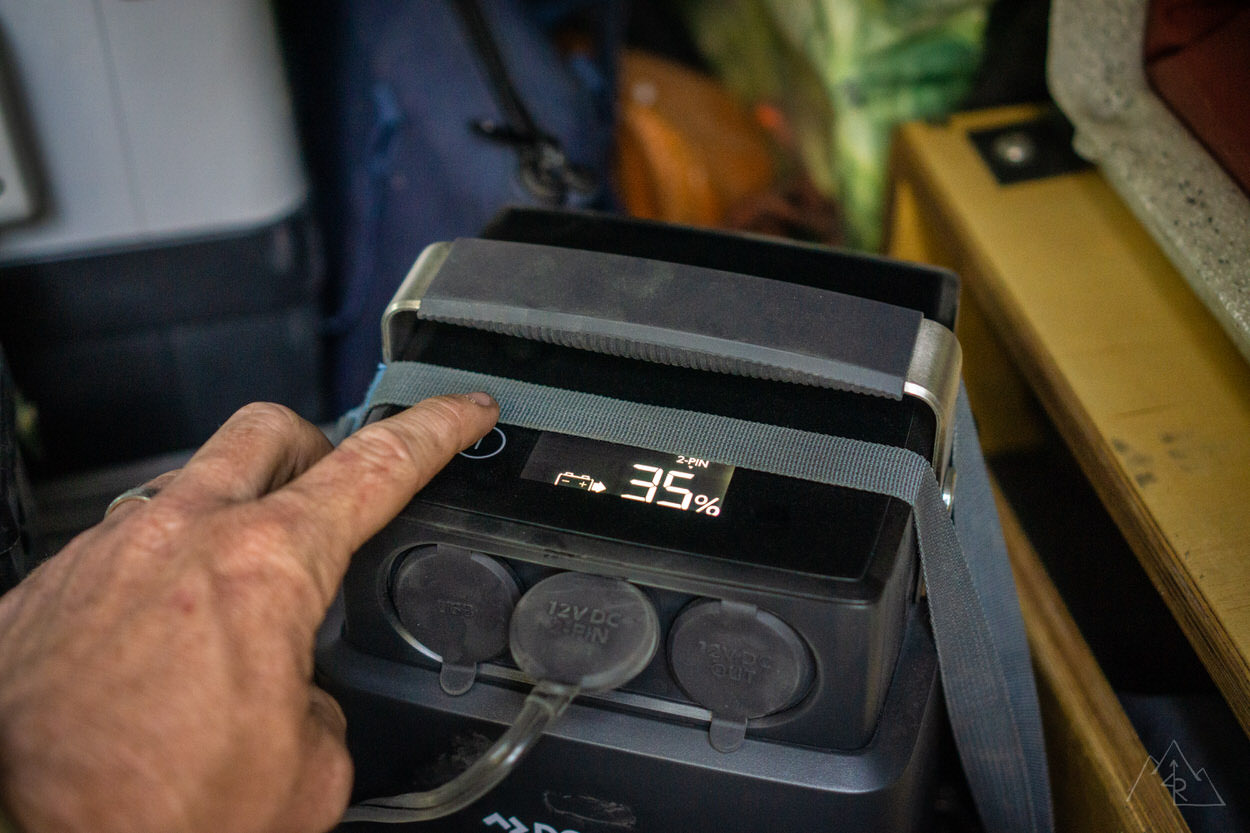 The layout for the PLB40 is really simple; one button on top (on/off) next to a backlit LCD screen that displays the battery charge status and inputs/outputs being used. 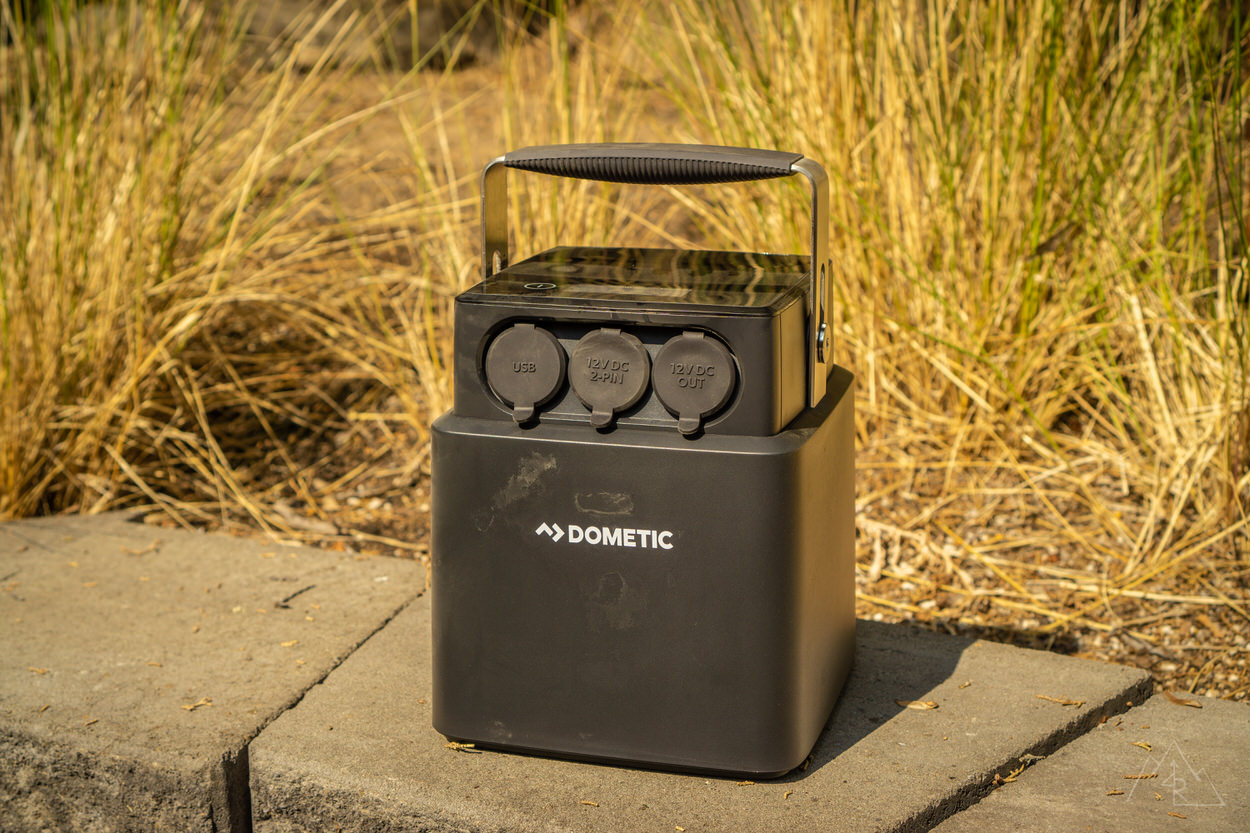 On the front, you’ll find a set of outputs that are really all that you need to power your most common devices.

One 12v DC socket, one 12v 2-pin port (Dometic/ARB fridges), and a pair of USB-A ports for your smaller devices. Two ports that are missing compared to the Goal Zero 500x we reviewed previously are a USB-C outlet and an AC outlet/inverter. Depending on what you need to power, this may be a deal-breaker from the get-go, however, for powering a fridge and small electronics, the Dometic’s configuration is ideal. 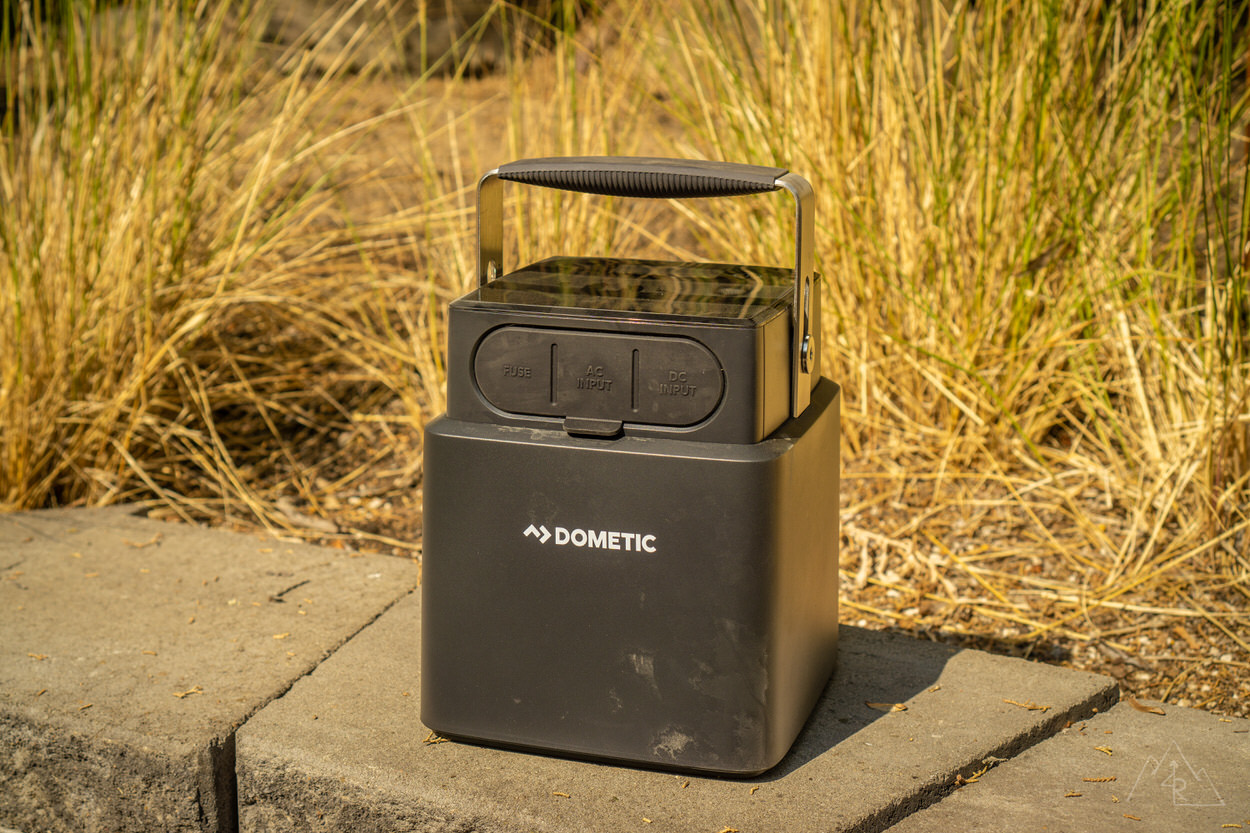 On the flip-side, this unit has two ways to charge the battery. The first is a 12v inlet that can accept power from a 12v source on your vehicle. It also doubles as the AC inlet for charging the battery at home using the supplied ACDC charger.

The other option is an Anderson plug inlet that is used for either solar or 12v sources. The addition of the Anderson plug was a big win for the Dometic as many enthusiasts use this type of plug as their preferred style in their vehicle.

Putting PLB40 to Use 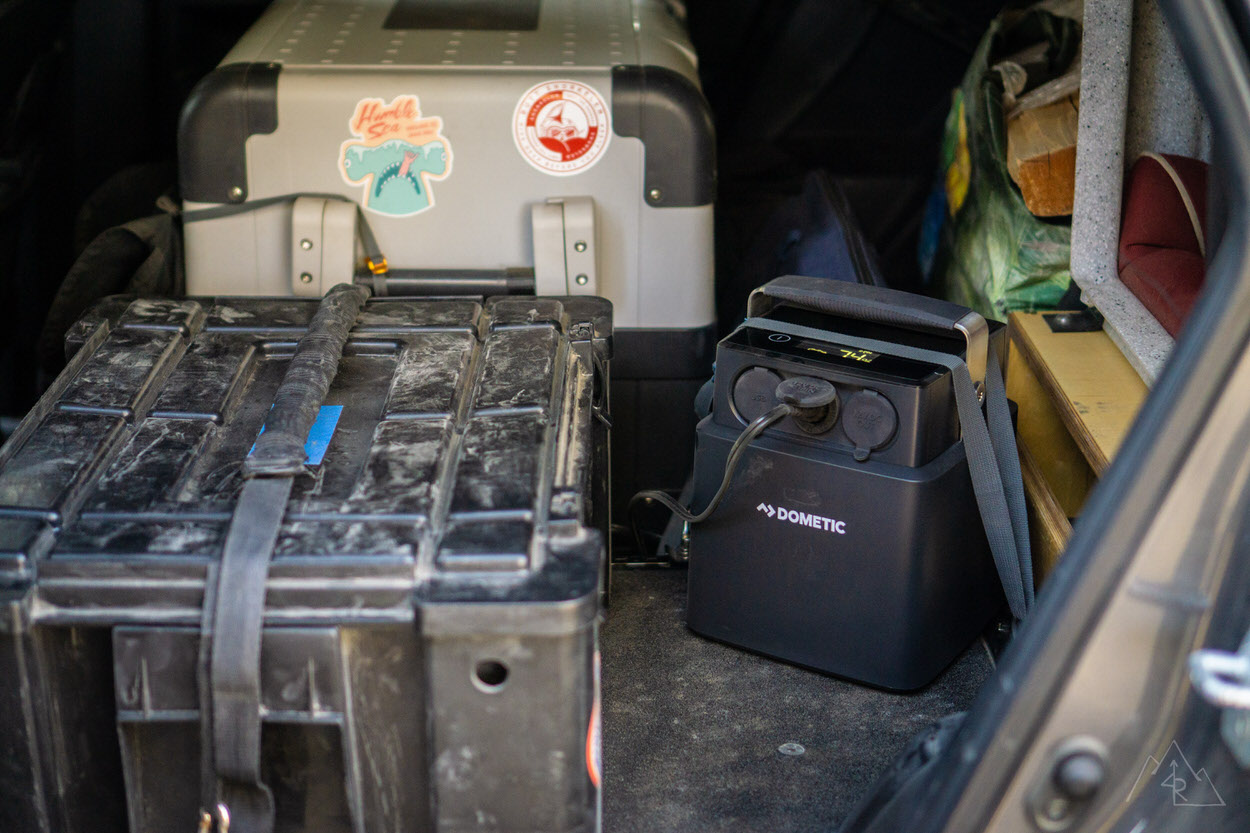 The main task for this battery is to power a fridge, specifically my Dometic CFX55 fridge that I have had for a few years now. I have always used my deep cycle AGM battery to power the fridge when I am off-grid, and it works well. The problem is that this battery also starts the 4Runner which isn’t an ideal long-term solution when you’re staying stationary for a few days.

The risk of running the battery dead while keeping your beer cold is higher than I would like, so the PLB40 is my solution to that. 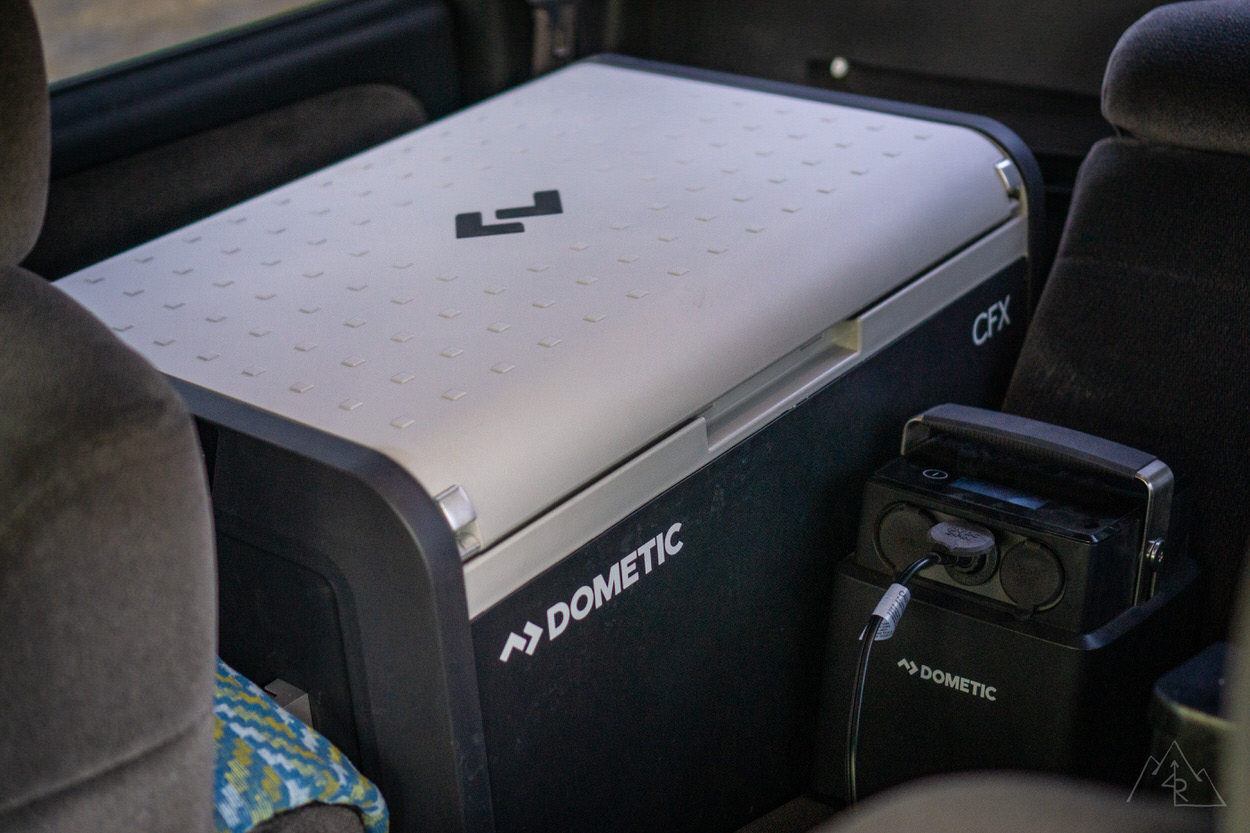 With the fridge plugged into the PLB40 and the battery plugged into the 12v socket in the 4Runner, the fridge will run from the vehicle while it’s on and from the PLB when the vehicle is off. The ability to have a pass-through charging system really simplifies the way the fridge runs and the amount of effort required on your end. The caveat is to make sure your 12v source is on the ignition and not an “always hot” source. Failure to do that will result in a dead starting battery, which doesn’t help anything.

So, you’ve arrived at camp and your 4Runner is shut down and parked. The fridge is now running from the PLB40’s output port, and not your starting battery. You can easily monitor your battery’s charge percentage using the screen on top by tapping the power button which turns on the LCD backlight. Throw a phone or a camera on a USB charger to top it off too while you enjoy a cold beer courtesy of your fridge.

Doubles As a Backup Battery At Home 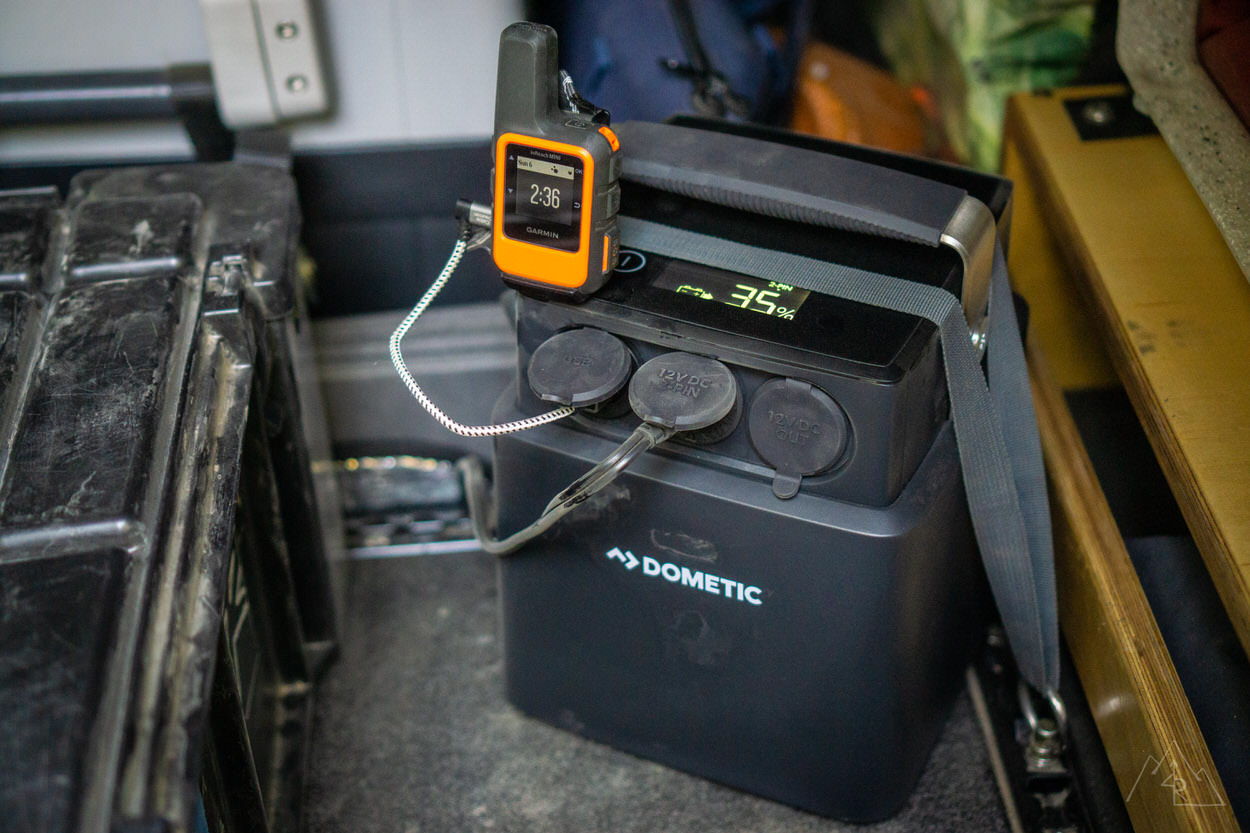 At home, the PLB40 can be used as a simple backup battery for your smaller devices during a power outage, along with a 12v fridge to keep essentials cold when you’re entertaining away from a power source.

In addition, now that many states in the west are using rolling blackouts during wind events as a form of wildfire prevention, the PLB’s flexibility could keep your perishables viable over an extended period if set appropriately with a quality fridge.

How long will it power a fridge? 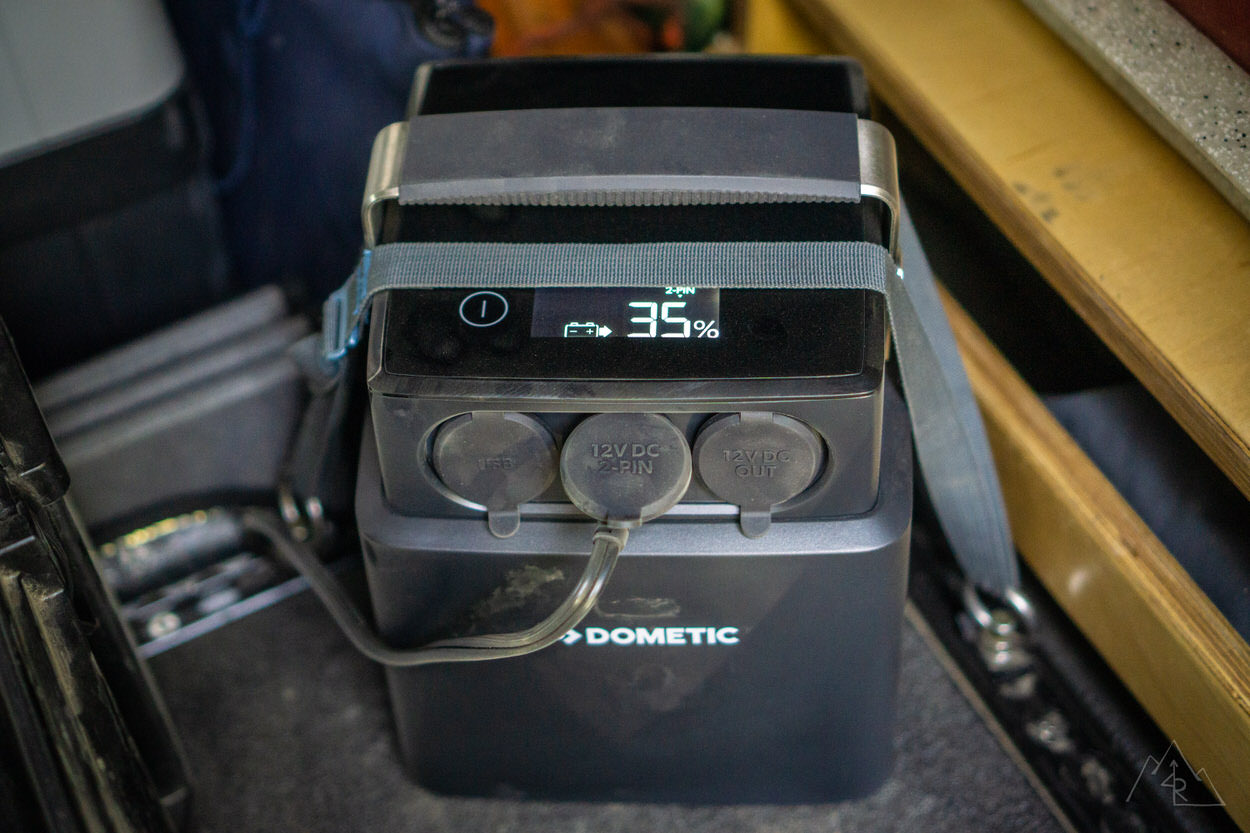 For my non-scientific real-world test, I loaded the fridge, plugged it into the PLB40 and headed out for a night of camping in the Central Oregon backcountry.

For reference, I did pre-chill the fridge the night before, so the battery was only responsible for maintaining the fridge temperature during my trip. I ran the fridge at a set temperature of 39ºF for around 30 hours and when I returned home, I still had 35% battery remaining.

That’s seriously impressive considering it wasn’t being charged from the vehicle or solar the entire time! Had I plugged the PLB40 into the 4Runner while driving to and from my destination, I’d imagine it would have easily been over 50% battery remaining at the end of the trip. For a small package, that’s a serious punch.

Note: This data shouldn’t be compared to the Goal Zero Fridge test previously conducted as the methods and environmental factors are entirely different. Plus, I left the fridge open for an extended period of time during the Dometic test thanks to a few adult beverages at camp… 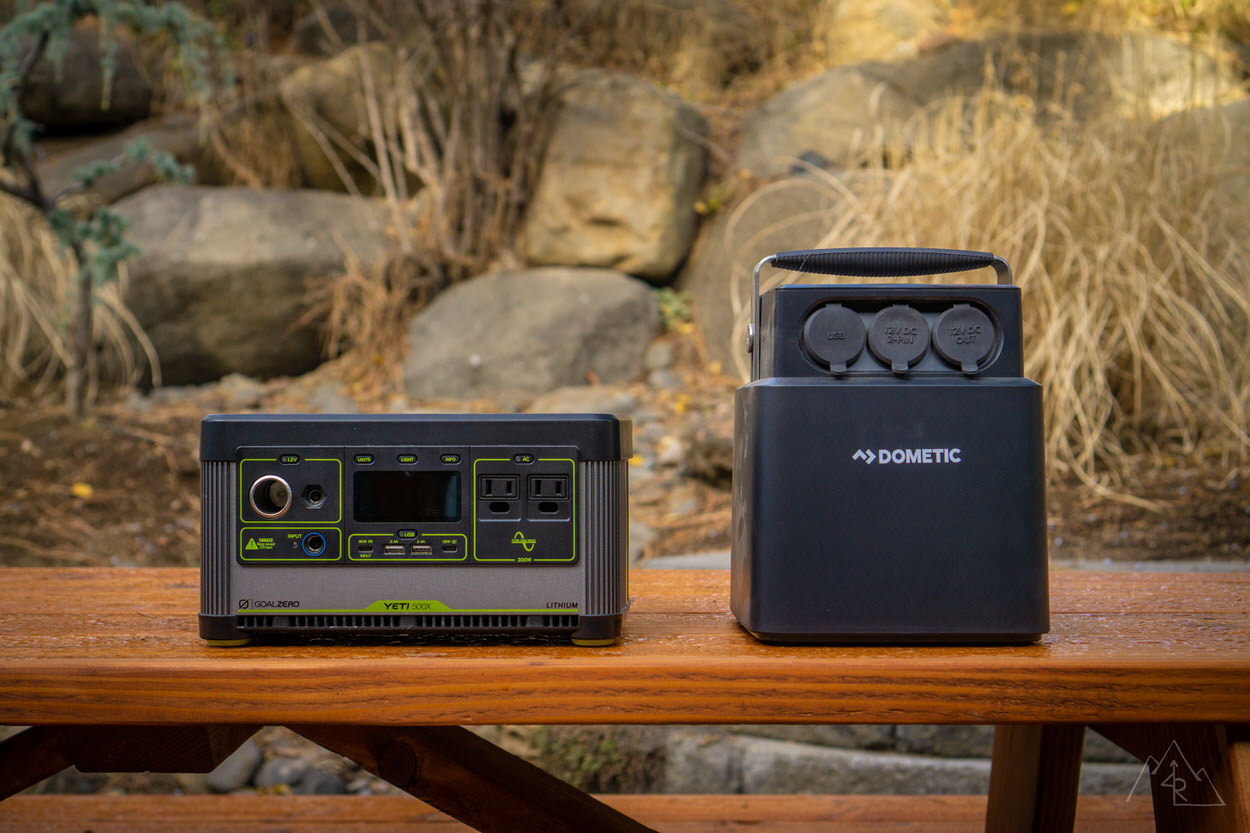 These two power packs are pitted in the same category, however, from the photo above you can see where the focuses are from each manufacturer.

Goal Zero is aiming to be able to charge everything from your fridge to your laptop to your watch. This approach makes for a very capable product, but also involved a lot of added complexity and more potential for efficiency losses. The Goal Zero boasts a slightly larger capacity than the Dometic, however, some of those additional features and ports come with an extra demand from the battery outside of the device being powered (power loss through the inverter, for example).

The Dometic option, on the other hand, has a much simpler focus, and as a result, does a better job powering a fridge, both functionally and ergonomically. It has a secured threaded 2-pin port which won’t allow the cord to unplug itself on bumpy roads. Like the Goal Zero, the PLB40 also has a regulated 12v DC output meaning you’ll get a consistent 12v of power from the ports to your devices. This is really important for powering a fridge as most will have a low voltage cutoff that can be triggered before an unregulated battery is drained due to an output lower than 12v.

Thanks to its square footprint, the Dometic takes up less floor space than the 500x making placement easier in the 4Runner. For the purpose of powering a portable fridge, I would choose the Dometic hands down. 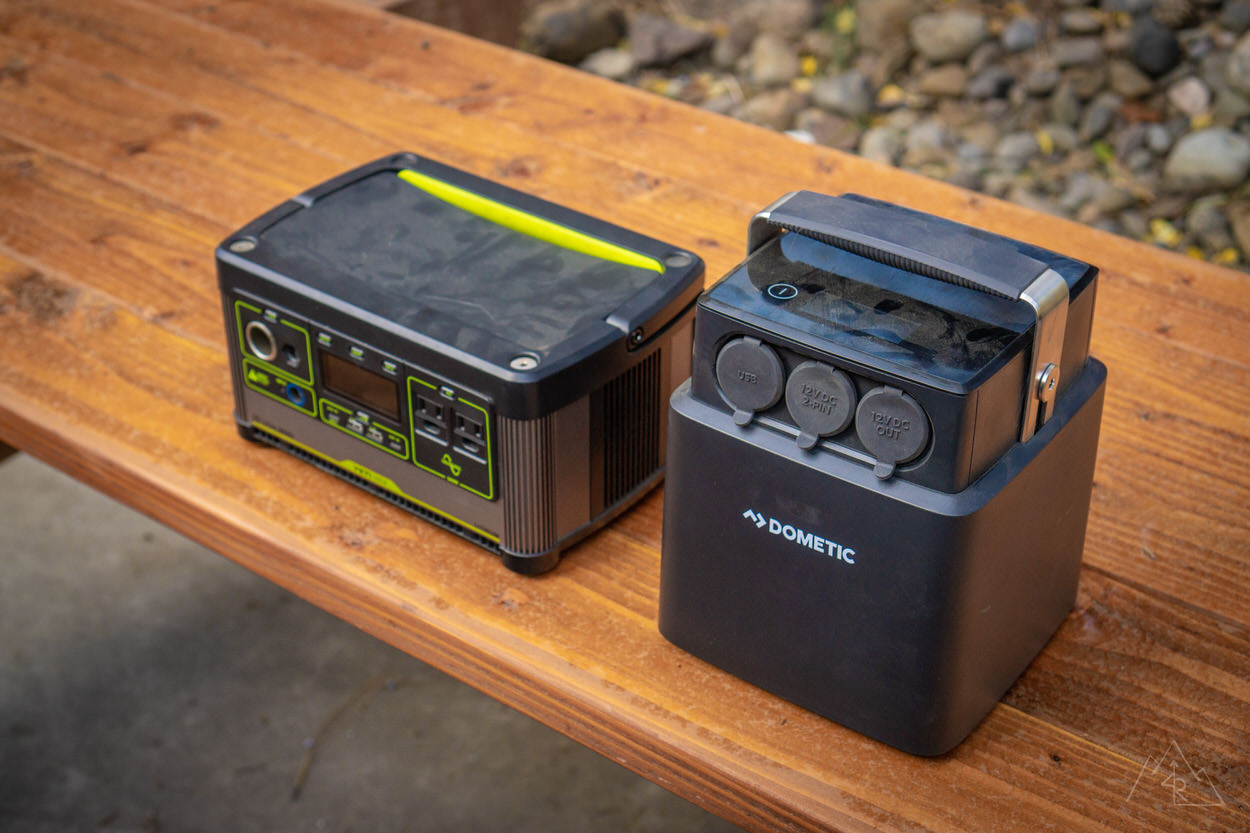 As an additional note, when storing the two batteries next to each other in the garage with the same temperature conditions, the Goal Zero has a slow but constant power drain when it’s not plugged in.

When you check after a few weeks from being charged at 100%, it will register in the mid 90% range. The Dometic, on the other hand, will remain steady at 100% with no sign of capacity depreciation over time. 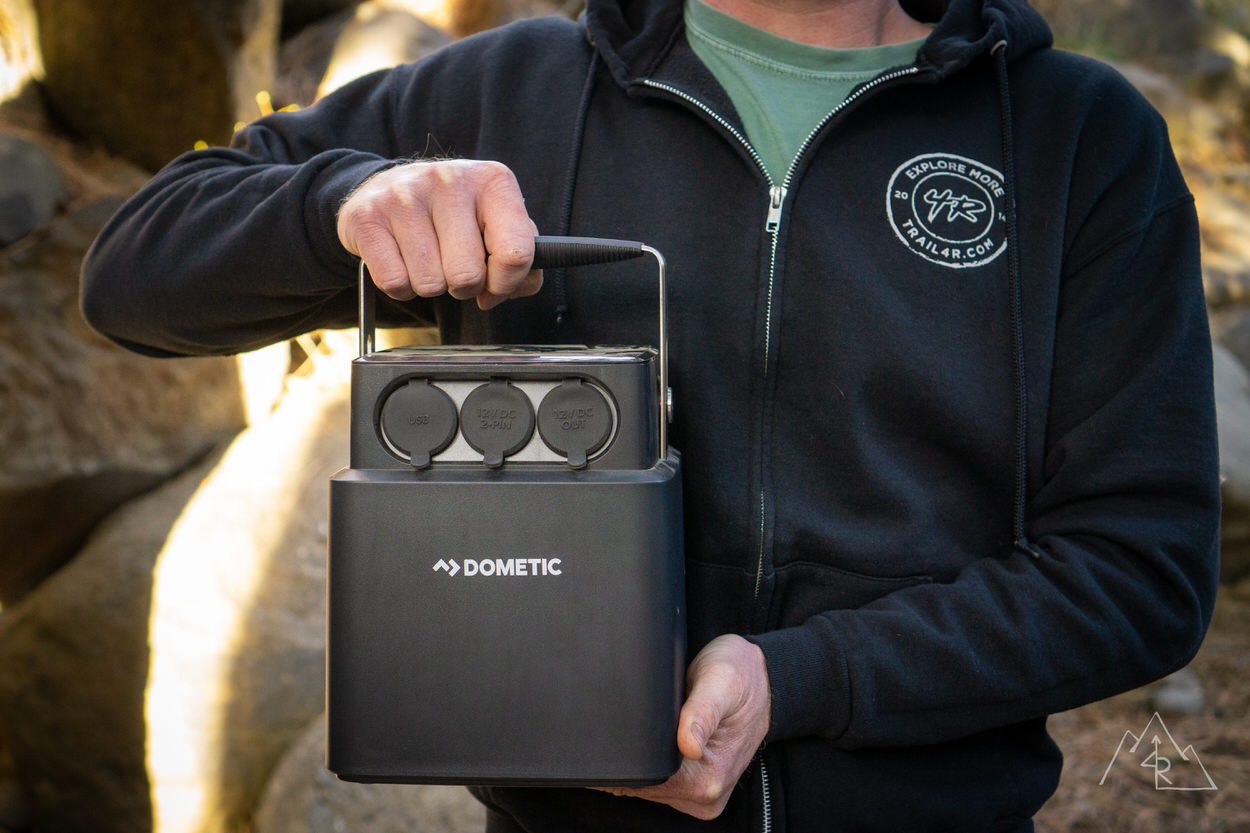 The PLB40 is a powerhouse option for keeping a fridge operating on your longest camping trips.

Good ergonomics, a functional set of features and enough capacity to hold a fridge at temperature for days make this a worthwhile accessory for those without a dual battery setup.

I really enjoyed the simplistic design, along with the quality feel of the PLB40 when moving it around the 4Runner before, during and after trips. The 40Ah capacity is a great balance of capability and size for the weekend warrior and will prove to be an essential tool for extending your time outside. Because that’s what it’s all about, right? That elusive extra day out!…

This may be a dumb question, but I am a newbie to running a 12v cooler fridge in my rig. I am planning a 12-day road trip, and I thought to run my 12v cooler off my 500w power station (Baldr). I was going to have the power station fed from the 5th gen 4 runners back cigarette port while we drive, so the station was charging while the fridge was running and not pulling off the car battery. Does that make any sense or just run the fridge off the car and use the power station when we shut off the car? Any thoughts and best practices are appreciated.

I have the PLB40 and a Goal Zero Boulder 100w Solar panel and would like to know if there is an adapter plug from the 8mm Goal Zero to the Anderson plug in the PLB40. Any insights would be super appreciated. Thank you

I have the same equipments as you and made my own cable.

All of the things listed are on Amazon.

Great write up! and I love the butt snorkeler sticker on the fridge haha

I’m very new to all this and don’t have much if any electrical knowledge, so could you please expand on what you mean by this? Advance thanks,

“The caveat is to make sure your 12v source is on the ignition and not an “always hot” source.

What he means is when the 12v source is on ignition, it will only draw power while the key is on. Always hot means it’s a circuit that always draws power shock could drain your vehicles battery. Ignition is better if you are running just one battery in vehicle.

Thanks — appreciate the feedback

Great review Max. I’ve had a PLB40 for about 9 months and it’s fantastic.

You should check out the Overland Solar Bugout 130. It’s a solar blanket (so rolls up small and is nice and light) that was designed for the PLB40. The PLB40 has a charge controller built in, so all you do is plug the blanket in, throw it in the sun, and it charges all day.

I’ve found it allows me to have essentially unlimited power for fridge and charging phone on multi-day trips regardless of whether your vehicle is being driven or not.

It’s a great pairing that gives you a lot of flexibility on trips.

Thanks Dave! Just what I was looking for. Just ordered.