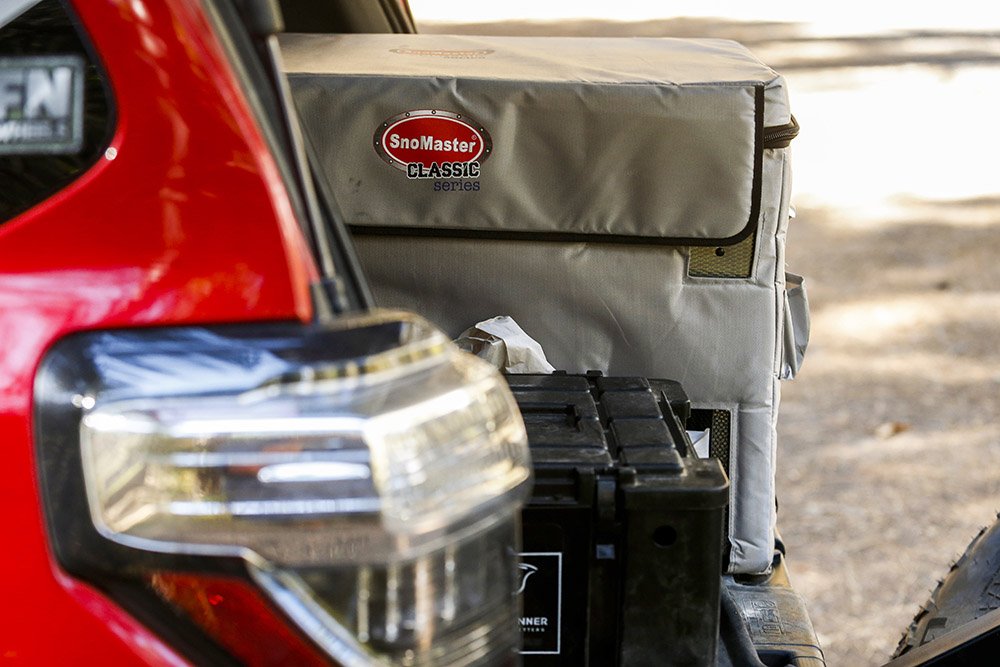 If you enjoy off-roading, odds are you enjoy a nice weekend out in the woods with your family or wheeling buddies.

Normally everyone pitches in somehow, whether it be with food, drinks, firewood, or something else. If left in charge of the food you have an important role. Everyone needs to eat, and nobody wants to get food poisoning, so how do you go about making sure everything is safe?

With a dedicated SnoMaster fridge/freezer meant to keep everything cool on the trail and after a day of wheeling.

SnoMaster is a company located in South Africa that has been designing refrigerator and refrigerator/freezer combinations for those who overland in Africa.

They’ve have been working on these for years and have some of the highest standards in the off-road community. Their products have been tested and proven in the harsh climates of Africa as well as all over the world. The USA headquarters is in Austin, Texas. 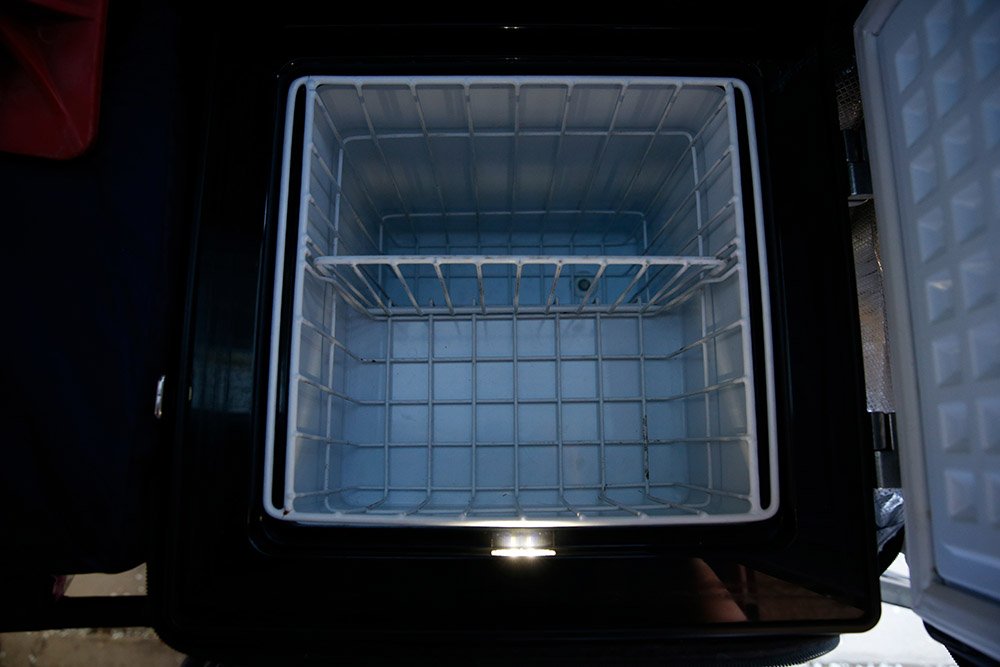 We’ve all been there. Off-roading all day and you begin to hear the sloshing from the cooler. The ice you bought for that YETI that’s supposed to keep everything cold hasn’t made it through a day in Death Valley, and while the water is still ice cold, that doesn’t last long and causes a mess.

Not only is the noise annoying while bouncing around on the trail, but you have water beginning to splash its way out through the lid and body of the cooler, and your meat has leaked into the water, causing your beverages to need to be cleaned off, not to mention has ruined things such as dips, condiments, fruits and vegetables.

With a SnoMaster fridge that is no longer an issue. Your items all stay nice and cold, while also gaining more room. While a cooler may claim to be 56 liters, you spend quite a bit of that space on the ice. The SnoMaster CL56D on the other hand gives you all of that 56 liters. That means more beer, more food, or maybe a towel to keep cool for your neck on those hot days.

When you are camping in hotter climates ice becomes even more vital. This causes you to pack more, resulting in less food and cold drinks. In the end, this results in you having to go back to town more frequently to resupply. Unfortunately in some areas, that’s no so easy, as the nearest grocery store may be quite a distance away, and during the summer there’s no guarantee there’s going to be a stockpile of ice bags.

The SnoMaster CL56D in return helps you save your gas miles for views and experiences rather than the drive back and forth to the pavement for groceries, not to mention helps extend your trip time by allowing you to pack an extra couple of days of food over ice.

One thing you may not think of is power outages. During the middle of summer last year my power went out for over a week and I needed a way to store all the food we had just bought from the grocery store. While I did have to throw some things out, such as cheaper items like condiments, I was able to keep just about everything important such as meats, vegetables and fruits. Without it, I would have been out a good $200 of food. 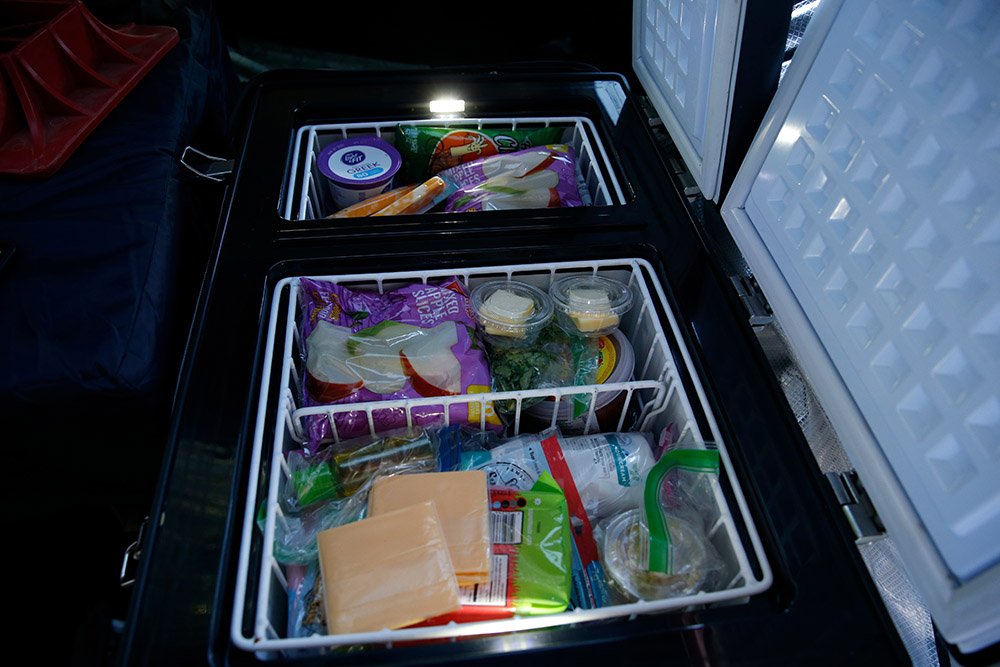 One reason I went with SnoMaster is because of the numerous features their refrigerators have.

For starters, you have multiple sizes with SnoMaster. Whether you only do day trips or do multi-week long trips, SnoMaster has you covered with their wide range of sizes.

I went with the CL56D because I wanted one that could keep food for an entire week, but also still give me enough room in the back of the 4Runner for other things such as camping gear, recovery gear, and other items such as clothing bags. Ultimately I cannot open my lids the entire way with the refrigerator inside the vehicle, but if pulled out on a slider there are no issues. Keep this in mind when looking into their products.

A nice feature for those of you on long trips is the ability to check the refrigerator from your driver’s seat. The SnoMaster CL56D comes with a remote control that displays the temperature of each compartment in the refrigerator.

Additionally, it gives you the ability to change those settings.

For instance, you may want to run the compartments cooler during the day while you’re driving (using more power), and then change them to a higher temperature at night while it’s cooler to help save battery drainage. The other nice thing about the remote control is that it’s all powered by solar, meaning you don’t have to worry about the battery ever running out and not being able to read temperatures while driving.

While most of us are good about keeping the lids closed, one feature that could come in handy if you have kids is the alert that the lid is open. After 90 seconds the refrigerator will begin to beep at you, warning you that it is open.

The fridge comes with a bottle opener on the side which is always convenient. You may not be a drinker, but odds are someone in the group is, and odds are they’ve forgotten a bottle opener.

While the fridge doesn’t come with a lock of its own, it does have the latches for one built-in. Meaning if this is somewhere where you don’t want someone getting into it, you can attach a lock and know nobody can get into it. 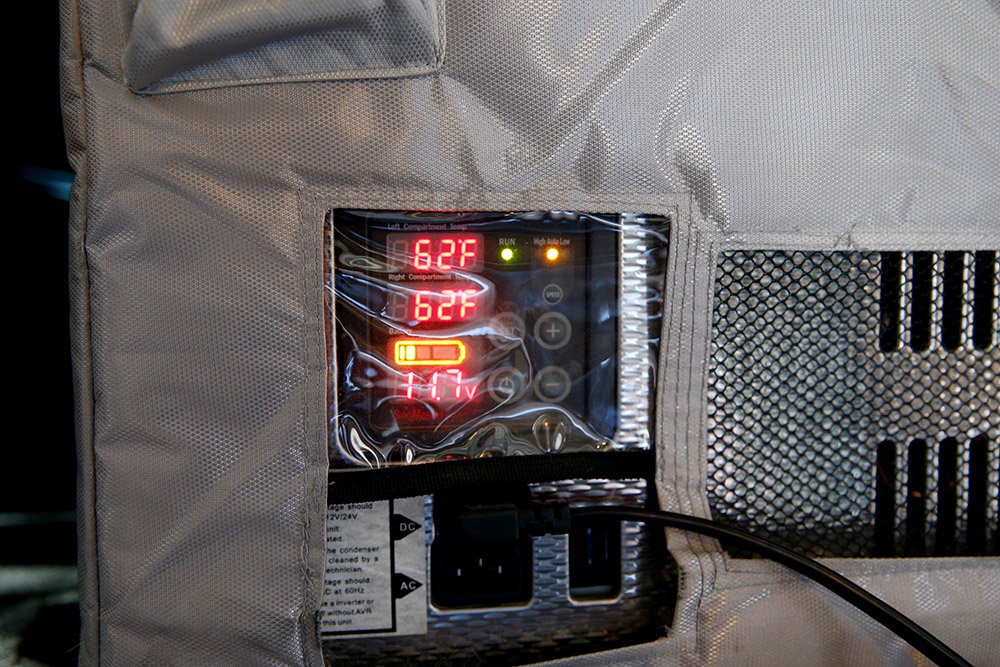 There are three settings with the CL56D, 10V, 10.7V, and 11.8V. You can choose what you want, but I tend to leave mine at the lowest so it doesn’t shut the fridge off, yet if it does, it will still allow me to start the vehicle. Ultimately if you are driving each day you shouldn’t have an issue leaving it at the lowest setting. An important note to keep in mind is that if the kill is triggered, your battery must reach 12.6V before the fridge will turn on again.

This has come in handy on numerous occasions. While on a long road trip with the family I was able to keep both of them set as a fridge, allowing us to have cold drinks and snacks the entire time. While a local 4×4 shop at a Halloween party I was able to set both compartments to a freezer and give out Halloween ice cream. For shorter weekend trips I was able to have food, drinks, and ice cream for everyone.

The temperatures for the fridge range from 50 degrees to -8 degrees.

To me, these are the two most important features of the fridge, as you have the ability to set everything exactly how you want it, while not worrying about it running to the point of your battery dying.

What else is needed? 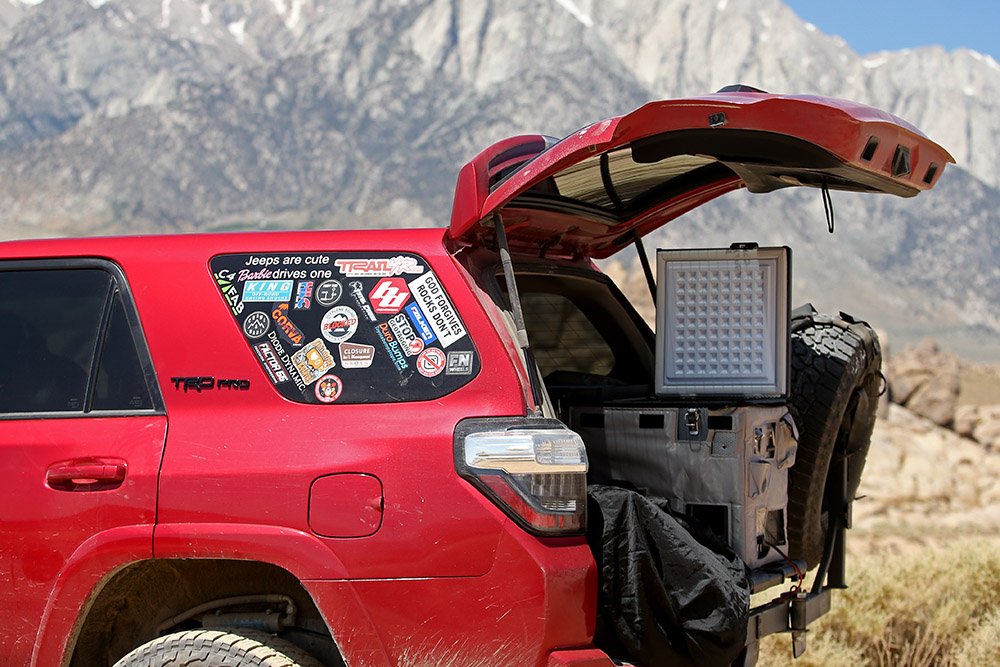 The idea of a fridge is always appealing to everyone until you start to talk about pricing and the other items necessary to run a fridge.

Obviously a fridge is going to cost quite a bit more than a cooler will, but the overall longterm picture is what you have to look at. How much gas will you be saving not having to get ice all the time? Will you be able to plan your trips better not needing grocery stores or towns close by? Do you need medical supplies that need to be kept cold? These are some of the things that a SnoMaster CL56D can help with.

The other thing people don’t think about when running a fridge is you need to power it. The stock battery on a 4Runner isn’t going to power the fridge for long. If you are driving all day then odds are you will be fine, but at night you will need to turn the fridge off in order to save the battery. This can work in cold climates, but in warmer climates, your food likely isn’t going to make it unless you have it completely frozen and completely packed tight.

This is where ponying up more money comes in. You can either run a dual battery setup or run a single large battery. I went to the single battery setup with an Odyssey 31M battery. At around $500 they aren’t cheap, but with the other items that I run, such as the winch, light bars, air compressor, etc, this would not only give me the power to run them, but also the fridge and a whole lot more.

Obviously you then need to wire the fridge up, and being mine isn’t 100% dedicated to off-roading, I chose to install a blue seas system in the back to support the 12-volt cable the fridge comes with. That way I can remove the fridge when it’s not being used. 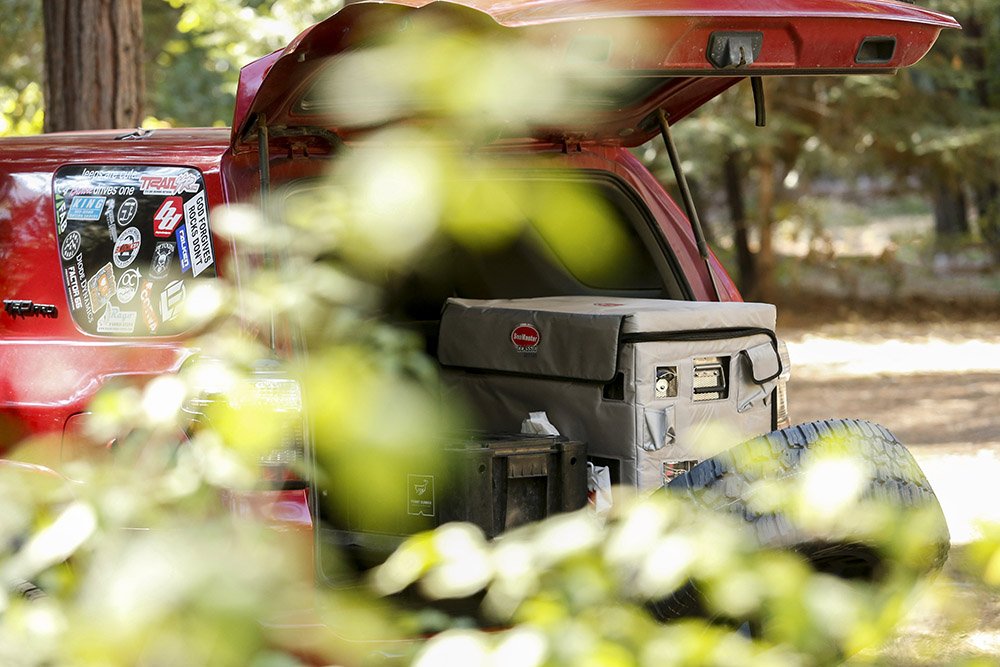 There are major advantages to the fridge and why to buy one. Ultimately it’s up to you on whether you want to buy one. For my hot days in Death Valley, knowing the fridge can operate up to 140 degrees is a huge deal. Not to mention has been proven in climates all over the world to do so. I was skeptical in the beginning when it came to fridges, but after a week of traveling with the one I could have knocked myself upside the head for not getting one sooner.

With so many overland options on the market from rooftop tents, drawer systems, and sleeping platforms, odds are the fridge is something you should consider buying first, as you will find the most use for it immediately.