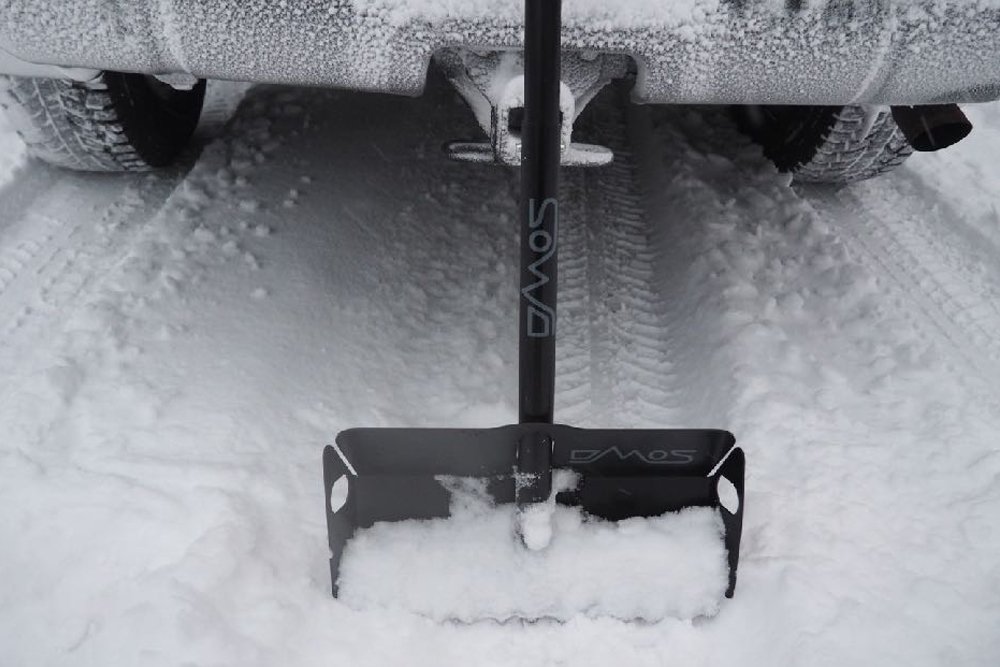 Could this DMOS Stealth Shovel be the Best Off-Road Snow Shovel we have Seen Yet?

Selecting new recovery gear can be both half the fun and half the frustration of outfitting your 4Runner.

There are dozens of choices in bumpers, winches, rock sliders, and such to choose from. It can be frankly overwhelming. As a result, the simpler tools in the overloading arsenal are sometimes overlooked. With winter bearing down, it might be worth reconsidering the humble snow shovel.

Even in the north country, it’s possible to get by without a snow shovel, though probably not wise.

In my various trucks and ATVs, I have typically made do with a compact military surplus style trenching tool, which was fine for digging latrines or cleaning up fire pits.

However, the blade was too small and the handle too short, which made moving significant snow a bear of a chore.

There quite a few off-road shovels out there so how do you find one that’s right for you?

The Hunt For the Ideal Off-Road Shovel

For my snowmobiles, I purchased an aluminum avalanche shovel with a telescoping handle.

This was light years better than the trenching tool for heavy work in snow, but its relatively large size meant that it had to be strapped to the cargo rack. It was prone to catching on low hanging branches and falling out entirely.

Over time, the handle attachment fatigued from use to the point that it had to be babied—not exactly what one wants from a survival tool.

I have also considered buying a full-size snow shovel to keep in the 4Runner, but accommodating that long handle seems inconvenient, whether it is stored inside the vehicle or mounted to the roof rack.

Additionally, the utility of most snow shovels is annoyingly limited to snow, making them useful for only part of the year.

Trying Out the Stealth Shovel From the DMOS Collective

The Stealth Shovel from DMOS Collective is one solution to this problem.

This sturdy, lightweight, and sinister-looking original design combines the compact storage of a trenching tool with the snow moving appetite of an avalanche shovel. Not to mention, DMOS also makes an easy-to-install shovel mount that fits all options form the DMOS shovel lineup.

Both the blade and handle are constructed of aluminum, and the whole package weighs just 3 lbs., 5 oz. DMOS (for Do My Own Sh*t) bills the Stealth as “tougher than an Avy shovel but easy to stow on your backpack, snowmobile, dune buggy or anywhere else your adventure takes you.”

We are American-born, American-made and champions of the American manufacturing spirit. The way we make things is as important to us as the things we make. Our manufacturing process is agile, lean and 100% American, from the materials we source, to our production facilities in Portland, Oregon. About DMOS Collective

Other Shovels From the DMOS Collective

The lineup of DMOS shovels has expanded from the original Stealth to include a variety of specialized offerings, including: 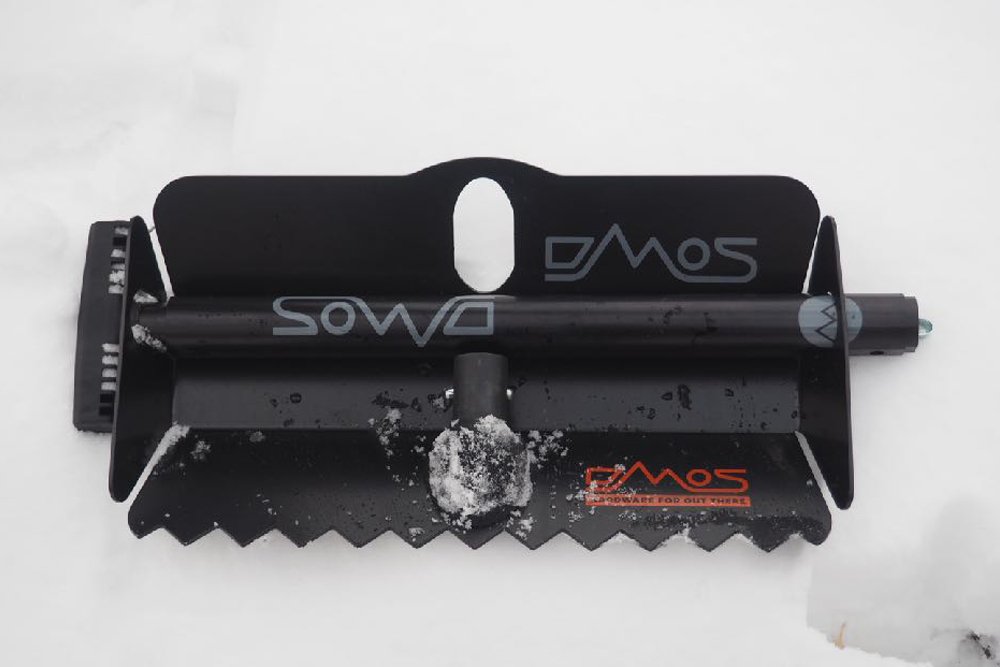 For storage, the collapsed handle slots through holes in the sides of the blade.

Broken down, the Stealth measures just 24” x 11” x 3”, yet its three-position telescoping handle extends up to 57” of reach.

It is available in ten different powder coated colors, including BlackOut, as shown in the photos. 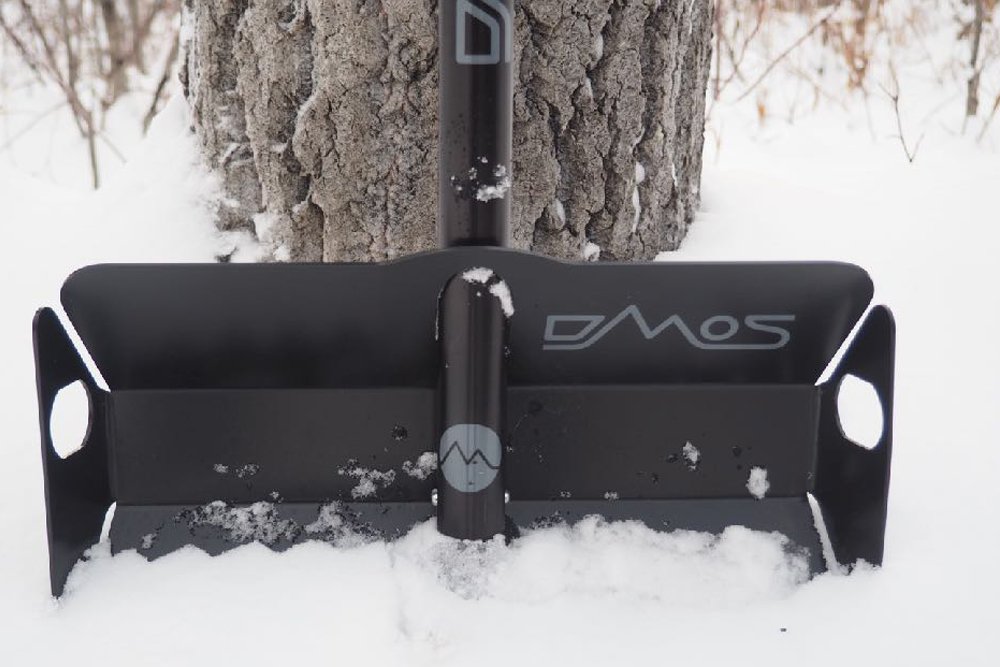 The handle passes through a slot in the rear wall of the blade and locks via a pin into a socket at the front.

This is a strong attachment—each handle piece overlaps by roughly three inches—and feels like a single shaft rather than a telescoping one.

The pins are made of stainless steel and function readily even below zero.

Serrated Blade For Breaking Through Ice and Gravel 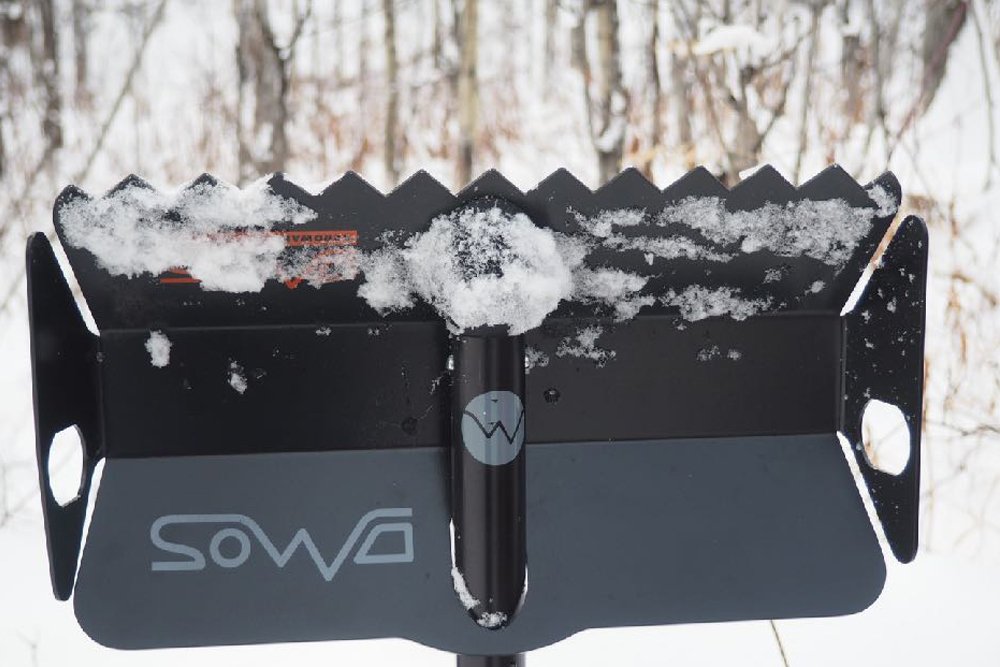 The serrated edge at the front of the blade enables the Stealth to break through some hard surfaces, including crusted ice and gravel, with minimal effort.

It can also be used for leveling ground or raking debris at a campsite.

The absence of a spade point does limit its ability to dig into the hard, packed ground—this is not the shovel you want for digging post holes.

The blade is made of 6061 aluminum and measures 3mm thick. The Stealth is made in the USA and has a thirty-day money-back guarantee, as well as a lifetime limited warranty. 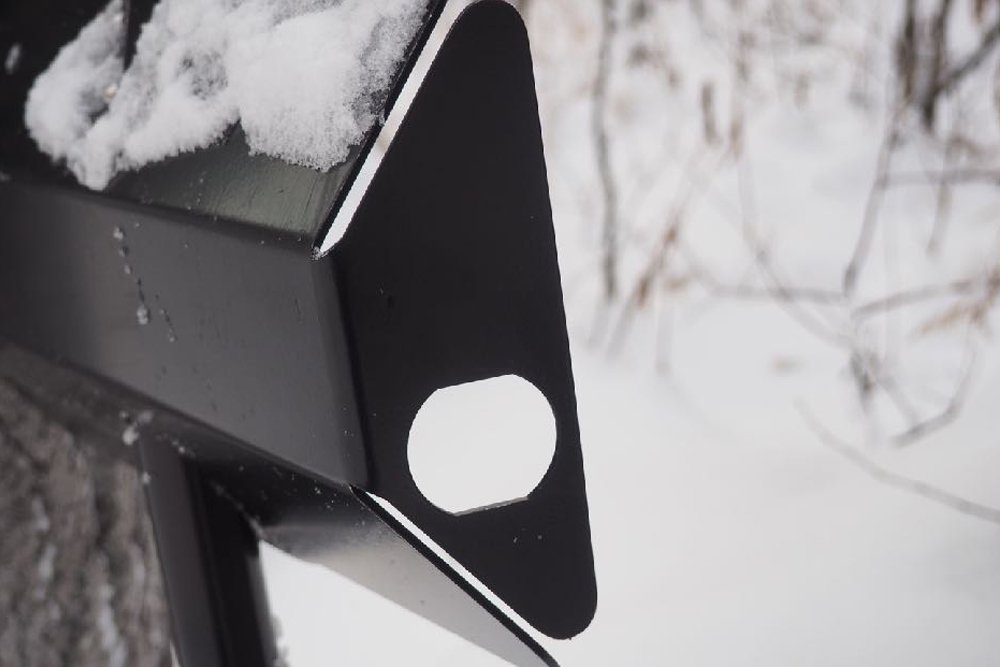 The Stealth is first and foremost a snow shovel, but it is also suitable for moving loose sand, gravel, and soil.

One minor gripe: When moving these substances, the gaps on the sidewalls of the blade will allow some material to escape. The gaps have no discernible effect on moving snow. 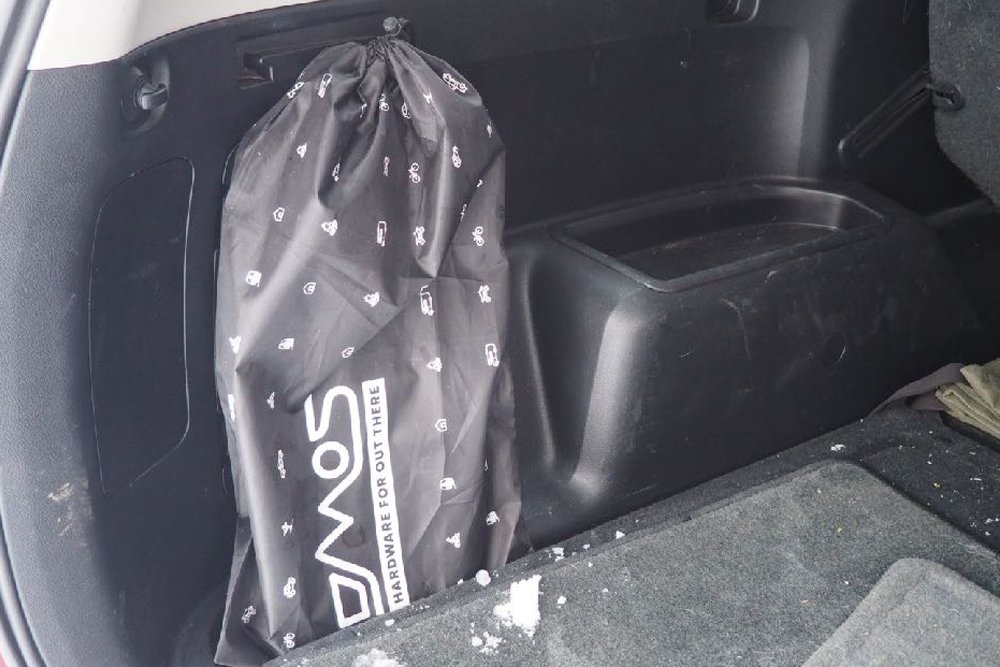 The Stealth comes with a lightweight drawstring storage bag.

The whole package packs nimbly in the rear corners of a 4Runner. DMOS also sells roof rack mounts for several of their shovels and a heavier carry bag, if needed.

Other Shovels From the DMOS Collective

The Alpha Collection features the Alpha 2, “the biggest, the beefiest, the brawniest” shovel made by DMOS. It is also available with a smooth blade as the Alpha 2S.

All shovels in the Delta Collection have a heavy-duty spade point. Steel and aluminum versions are available. This collection features a multi-purpose, 3-in-1 tool that gets you the most for your money. 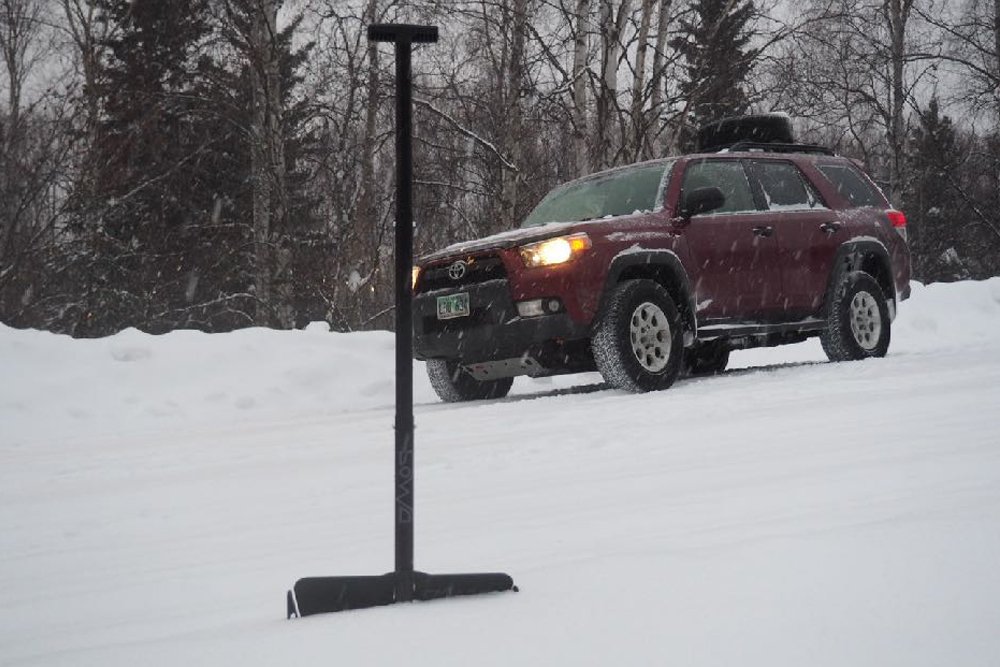 My Stealth shovel has earned its keep steadily over the past three months. I moved gravel with it in Colorado to clean up around a fire pit.

Later, I used it to dig my way out of two campsites during an early October snowstorm on the ALCAN.

I have not needed it on any of my forays since, but it is always at the ready.

It also serves as my primary snow remover at my cabin near Fairbanks. I have found the handle to be comfortable at full extension, and the protective coating on the aluminum has held up.

Snow does have a tendency to pack around the handle socket in the blade and does not always shed readily.

The Stealth is strong enough to be used for household snow removal but breaks down in a compact package for overloading or other vehicle use. There is nothing cheap or gimmicky about its construction.

More than most snow shovels, it has some multi-season utility, but there are definitely camping situations where a spade point would be more useful. DMOS shovels are engineered in Wyoming and manufactured in Oregon, and are backed by a lifetime warranty.

Overall, if you are looking for a well-made snow shovel for vehicle-based usage, the Stealth could be the one.

Is that your red trail runner in the picture?

My apologies for the delayed reply. Yes, that is my 4Runner in the pictures.

Awesome review. I was looking at picking one up but living in the desert I couldn’t tell if it could handle hard abuse other than snow and ice. I think this earns a place on my list.