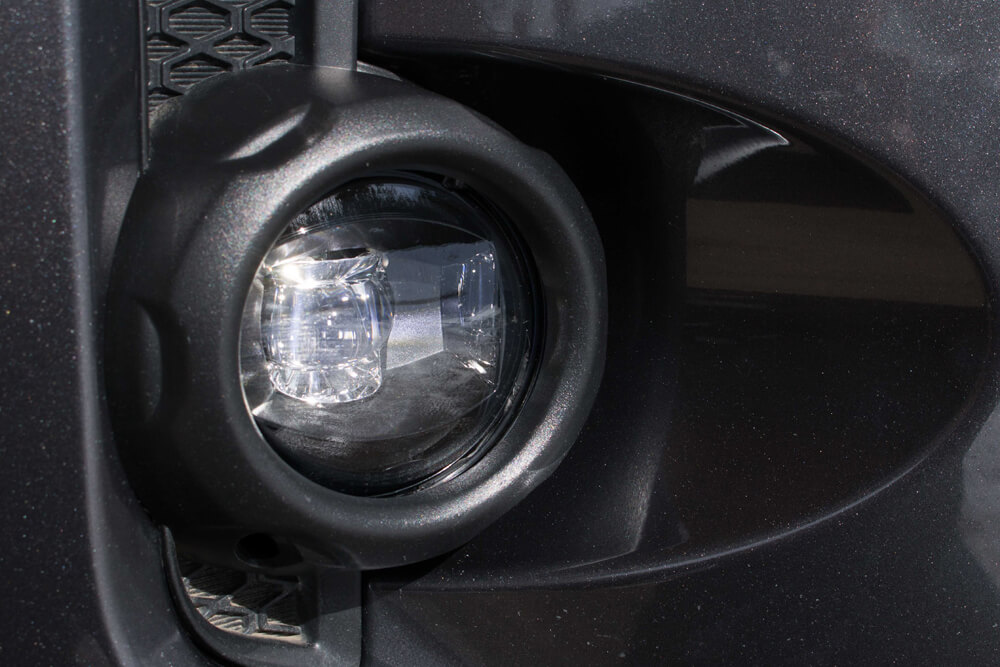 For the 2019 model lineup, Toyota added LED fog lights to the TRD Pro.

They offer substantially higher light output and better aesthetics than the halogen lights all at a surprisingly good price, especially for an OEM part.

Although there are many other aftermarket fog lights on the market, many of which have a higher lumen output, most are not legal to use on the road as they do not have a sufficient cut off to avoid blinding oncoming traffic.

Pricing & Where to buy

You can also buy the light from many Toyota Parts websites, or just call and order it from your local dealer.

The install is straightforward.

In summary, remove the screws along the fender to allow you to pull back the wheel well liner. This is much easier if you partially jack up the vehicle and turn the wheel to allow for more clearance.

From there you can unclip the wiring harness and remove the two screws holding the light housing in. On the passenger side, there is a clipped in the plastic cover that must be removed first. I could not get it to pop off using the screwdriver method, so I just used brute force and yanked it off.

Nothing broke when so I would not worry about just yanking it off with force. The whole install took less than an hour.

On the back of the light is a small trim wheel that can be turned to adjust the aim of the light.

Try to aim them as best as you can with the wheel well liner pulled back. If they are not perfectly lined up in reference to each other once the install is done, you can access the driver’s side trim wheel with the hood open and the front plastic cover removed.

They have a very wide range of movement, from so low that you can’t see the light from the driver’s seat to all the way up to above the headlights.

Essentially, they perfectly filled in the darker area below the headlights. This also happens to roughly aim up with the top of the cut off of the stock halogen fog lights.

COMPARISON TO OTHER 4RUNNER LIGHTS

One of the biggest benefits of the LED fog light is that it has a much closer color temp, aka Kelvin, to most upgraded low and high beams.

Here you can see the comparison to the stock halogen low beam as well as the popular XenonDepot Xtreme HID kit (5000k option).

The OEM LED fog lights do not have an advertised kelvin, but they seem to be about 6000k.

If you prefer an amber fog light, you can get the Lamin-X Fog Filters.

The halogen light and the LED light appear to have the same outer shape, so the filter should fit perfectly. 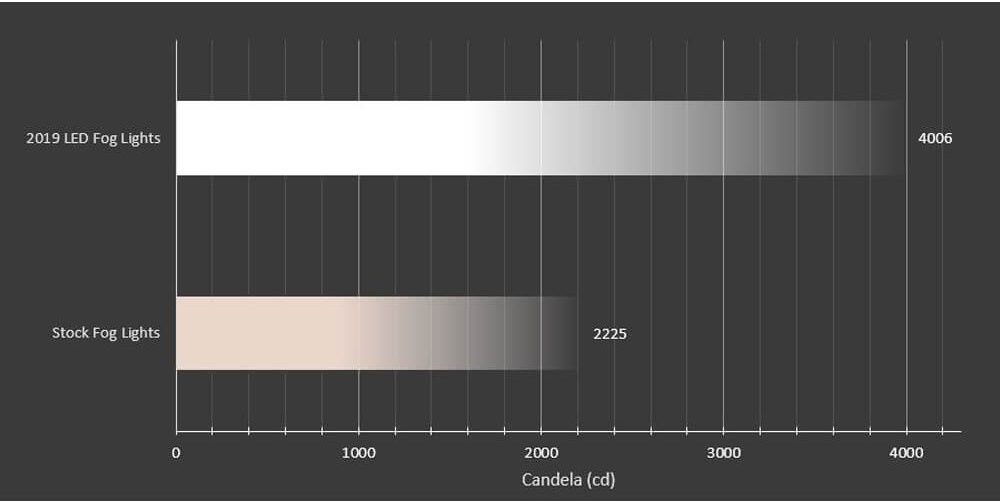 For testing, I used this LUX meter. I set it to MAX mode to measure the peak brightness.

The LED lights are almost 2x as intense than the stock halogen lights.

They also have a much wider coverage area, so I expect that the total lumen output is well over double the lumens of the halogen lights.

The LED lights have an extremally sharp cut off compared to the halogen lights.

he halogen lights spill down substantially lower than the LED lights, but this is wasted light because on a flat surface this is not visible while sitting in the drivers’ seat.

The LED also spreads over much further to the opposite side, so when using both LED fog lights they combine their power and create a much brighter center than with the halogens.

PATTERN WITH HEADLIGHTS ON

Here you can see the full pattern with the headlights on as well.

The LED light begins just as the headlight throw is ending. On a relatively flat surface, the LED throw spreads out so that it does not appear to be as thin as shown when against a wall. 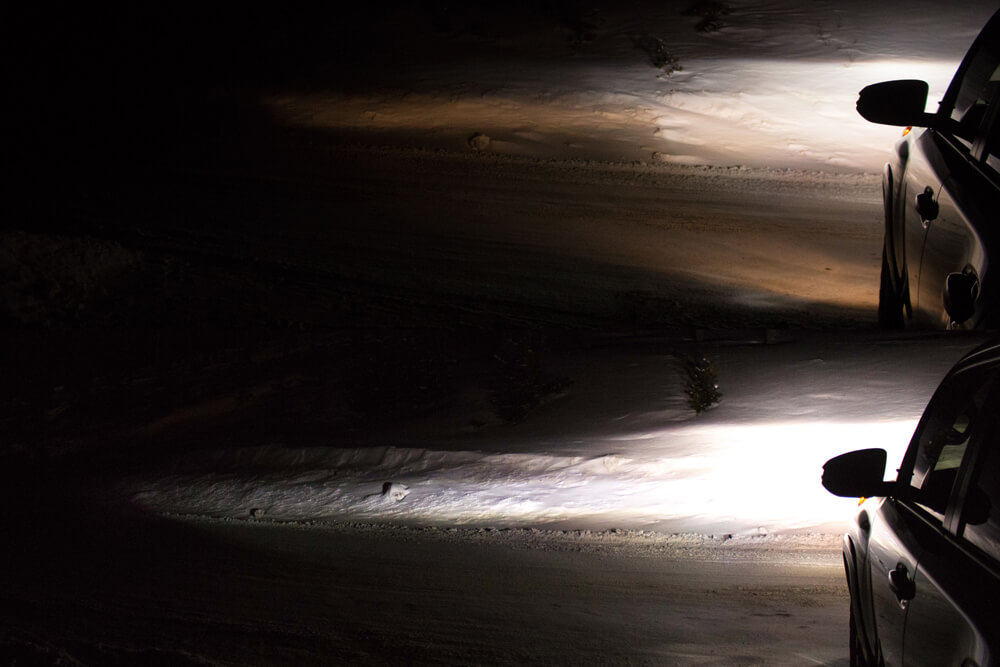 The LED lights also have a much wider spill to them in comparison to the halogen lights.

This is great when taking tight turns with obstacles nearby, such as when in a parking lot. This is especially useful if you have tinted windows.

Bryson Hicks
My name is Bryson and I am new to off-roading, but not new to making lots of modifications to my cars. Owner of a 2015 Trail edition deep in the Rockies of Colorado, some of my passions are camping, backpacking, and photography.
Recent Posts

Thanks for the review, didn’t know about this lights. I like the black housing!
Is it possible to have a picture with the whole front of the truck? Thanks

Here you go. When the front of the housing gets dirty it has a cool effect where the lights look like rectangles. 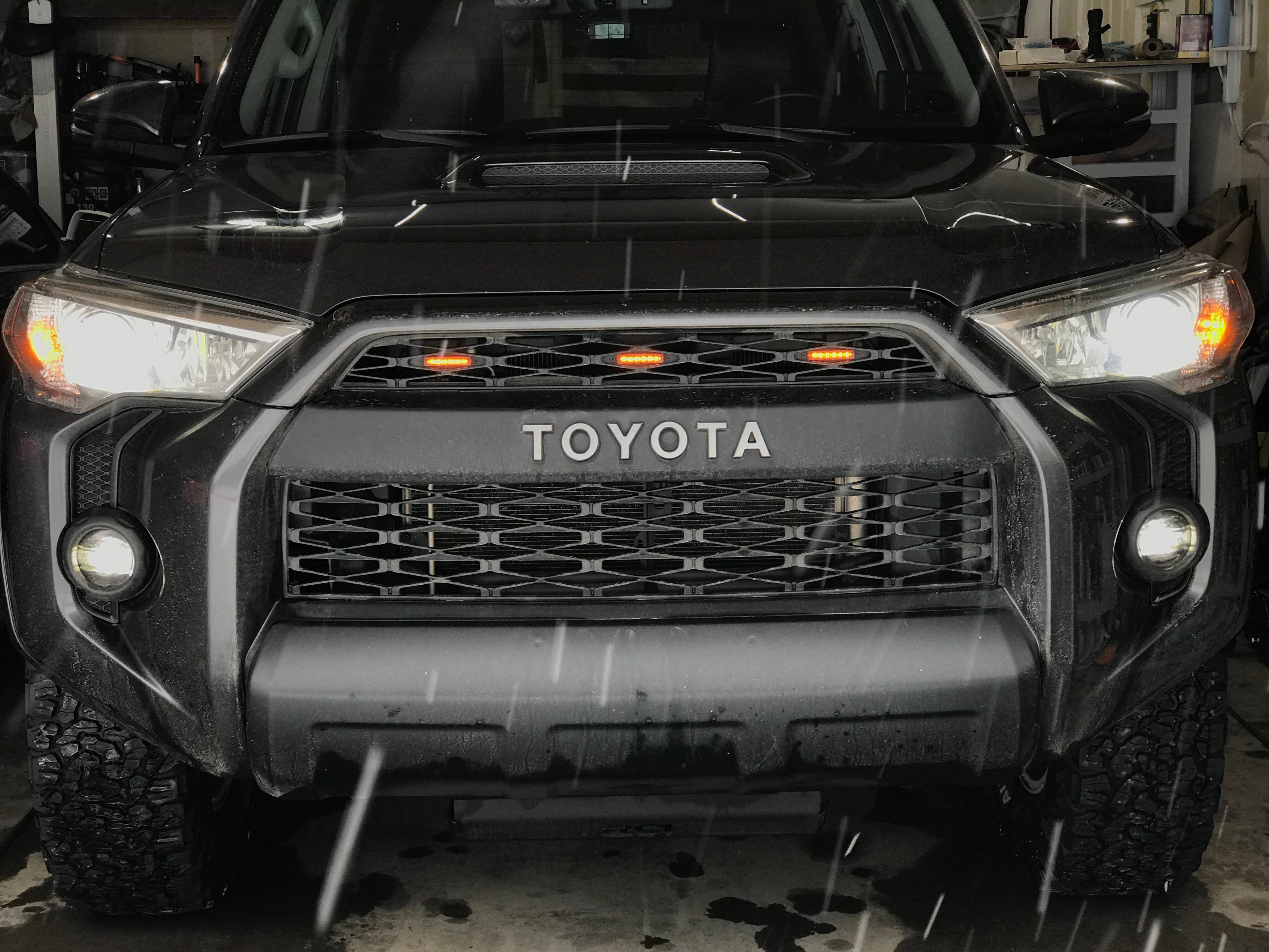 What headlights are you running?

Thanks for your write up. Your lux meter data is good info. Your marker lights installation looks clean, no zip ties! What marker lights are using and how did you install them behind the grill? Thanks

Thanks for the review. I’m debating between these and the Morimoto LED fog light.

Yeah same. Looks like the design is very similar, it would be interesting to see a comparison of the output.

Bryson, was there an actual lumen rating noted on anything when you received them?

No. It was just the lights in a plain box if I remember correctly.

I completed this mod this morning after reading about it on this site. I’m so glad I did it. The LEDs are much brighter than the stock bulbs and the asthetics are sharper in my opinion.

First off great blog site! I have some Aiden James LED bulbs already. How do TRD LED compare to just replacing the bulbs in the housing?

Great review! Do you know if these will fit a 2017 Limited?

Assuming the fog lights are identical between the Limited and the rest of the trims then yes, but I am not sure if they are and not sure how to check.

Thanks a bunch, I appreciate it. Did some digging and it looks like they’ll work. Keep the great posts coming!

I would be interested in seeing the comparsion between these OEM fog lights vs Baja Designs and Rigid Industries. 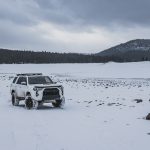 Should you Supercharge or Re-Gear Your 5th Gen 4Runner?5th Gen Mods 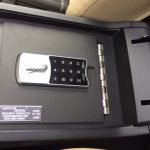